From a tiny parrot needing a splint, to a Galapagos tortoise with an injured leg, Auckland Zoo’s vet team treat an array of medical issues – some more baffling than others – in a huge variety of animals that, in clinical terms, only a little is known about. But did you know the lengths our vet team go to when helping not only our Zoo whānau, but also Aotearoa’s wildlife in need? 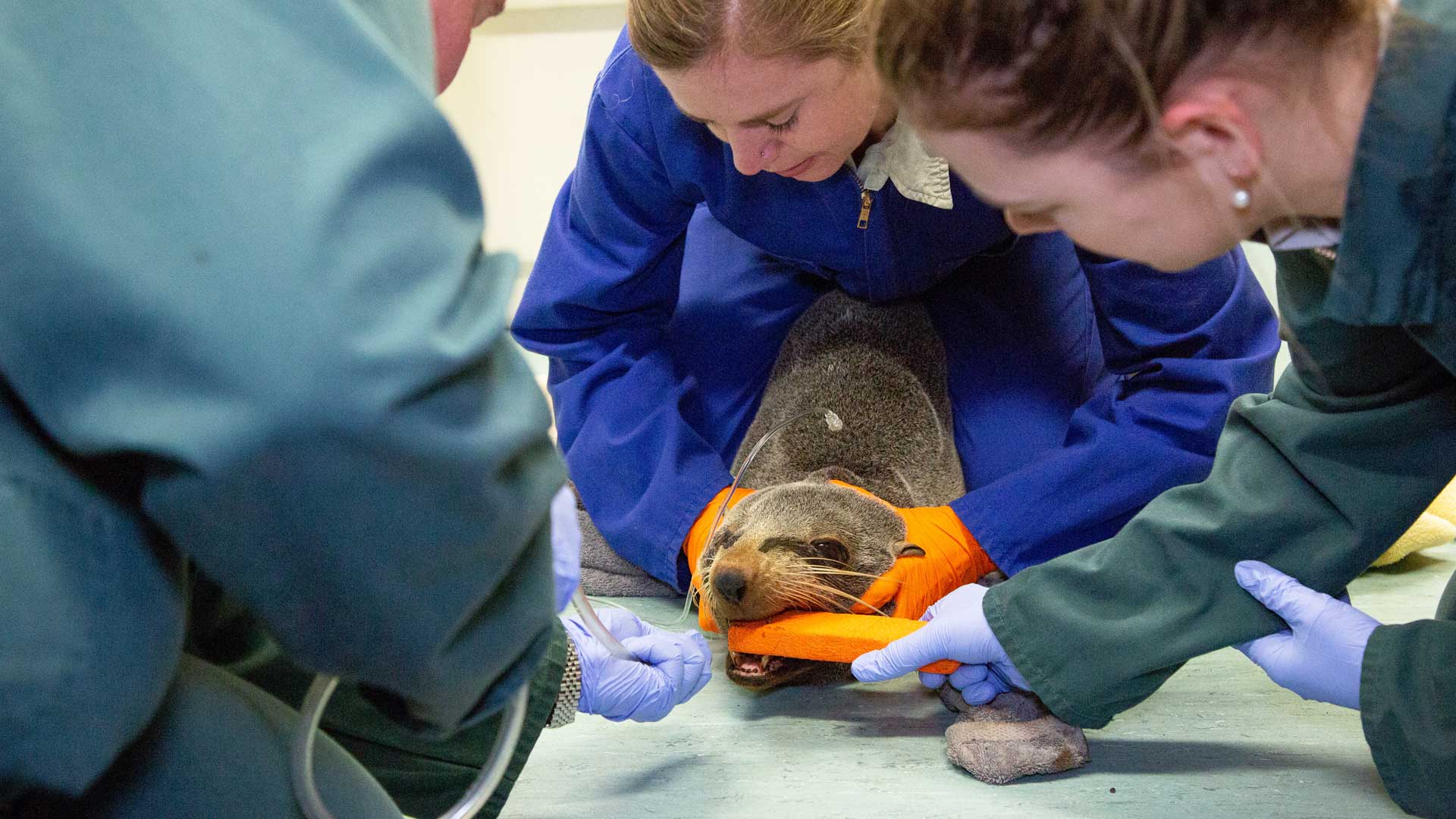 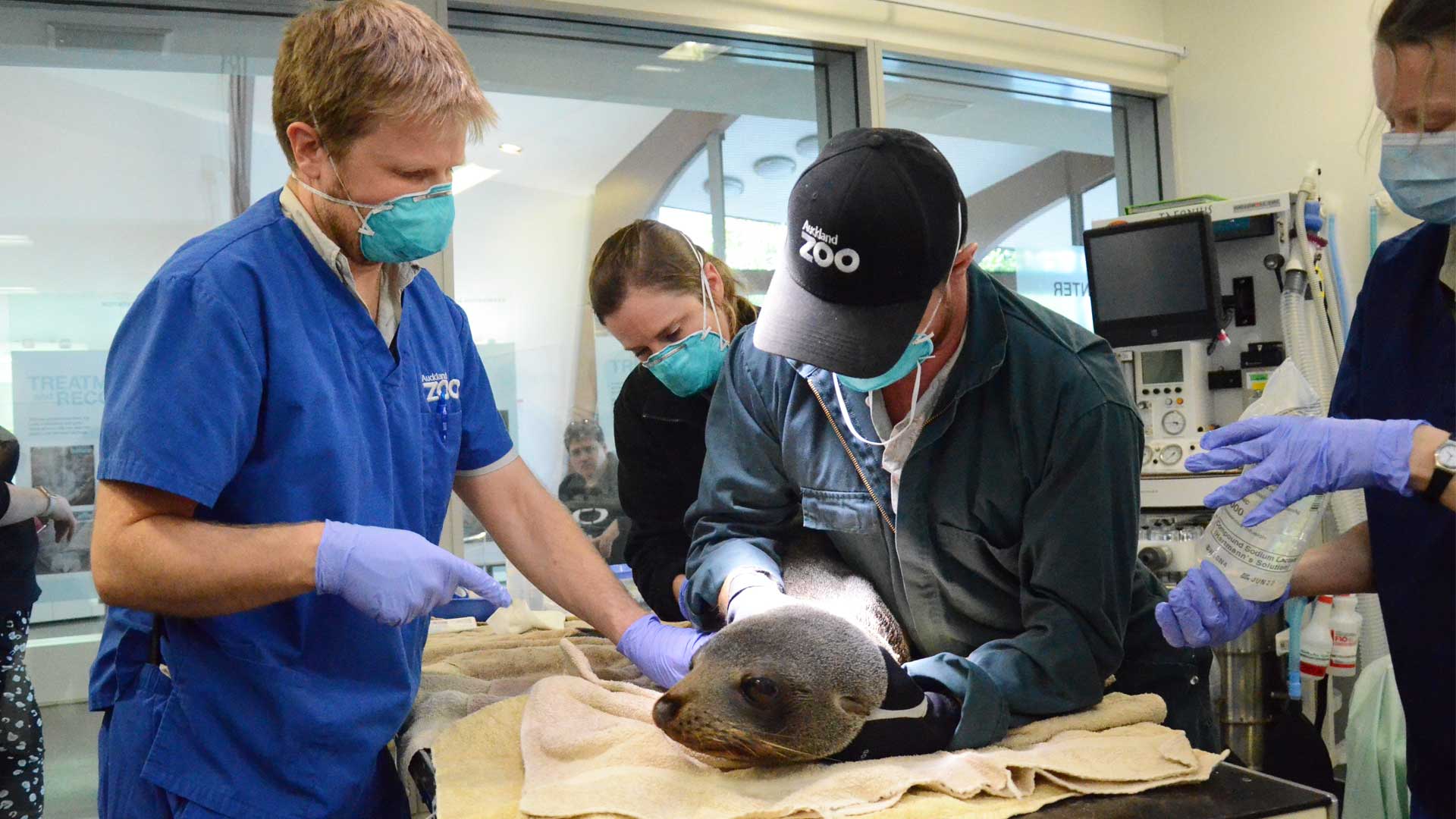 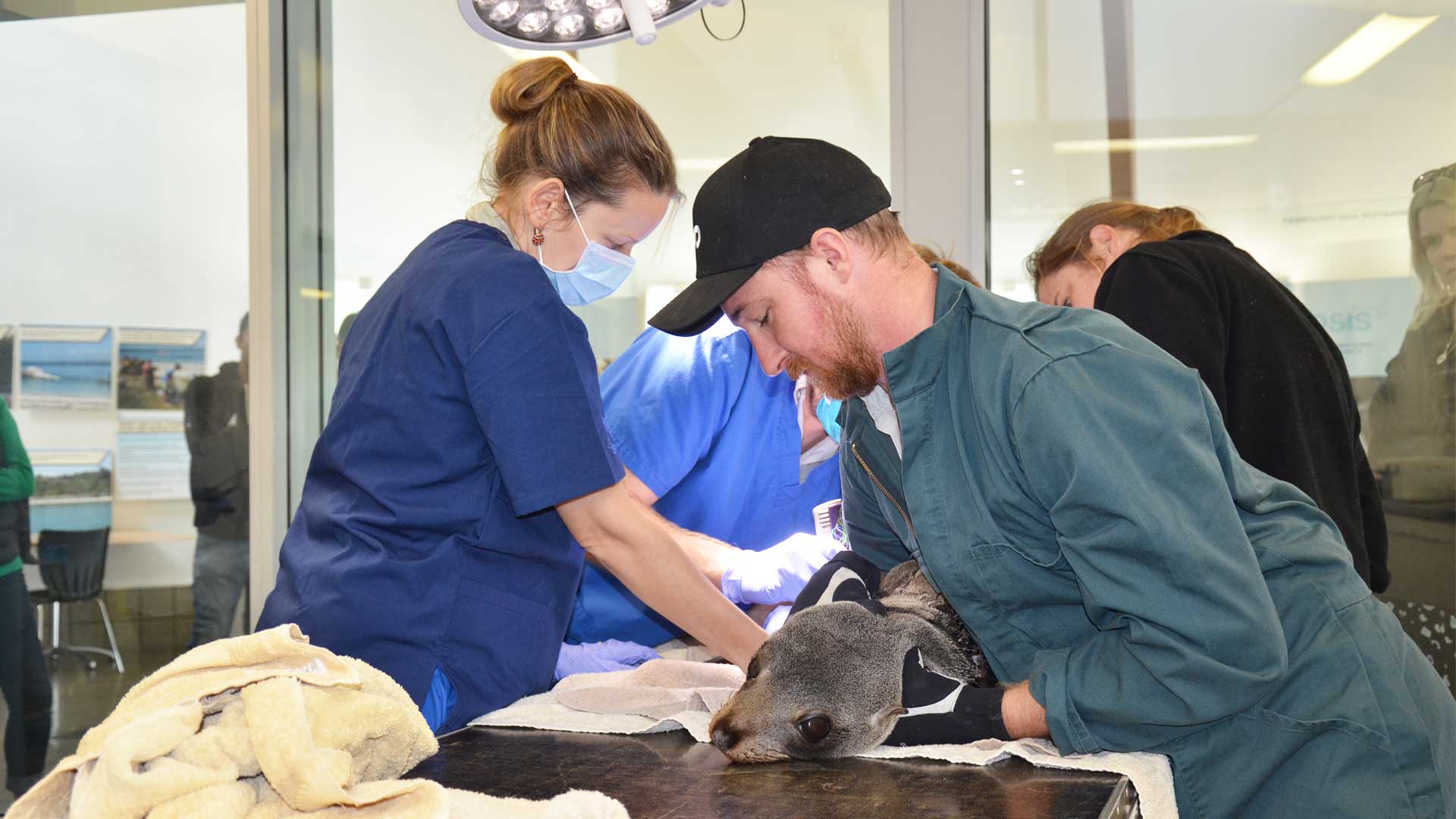 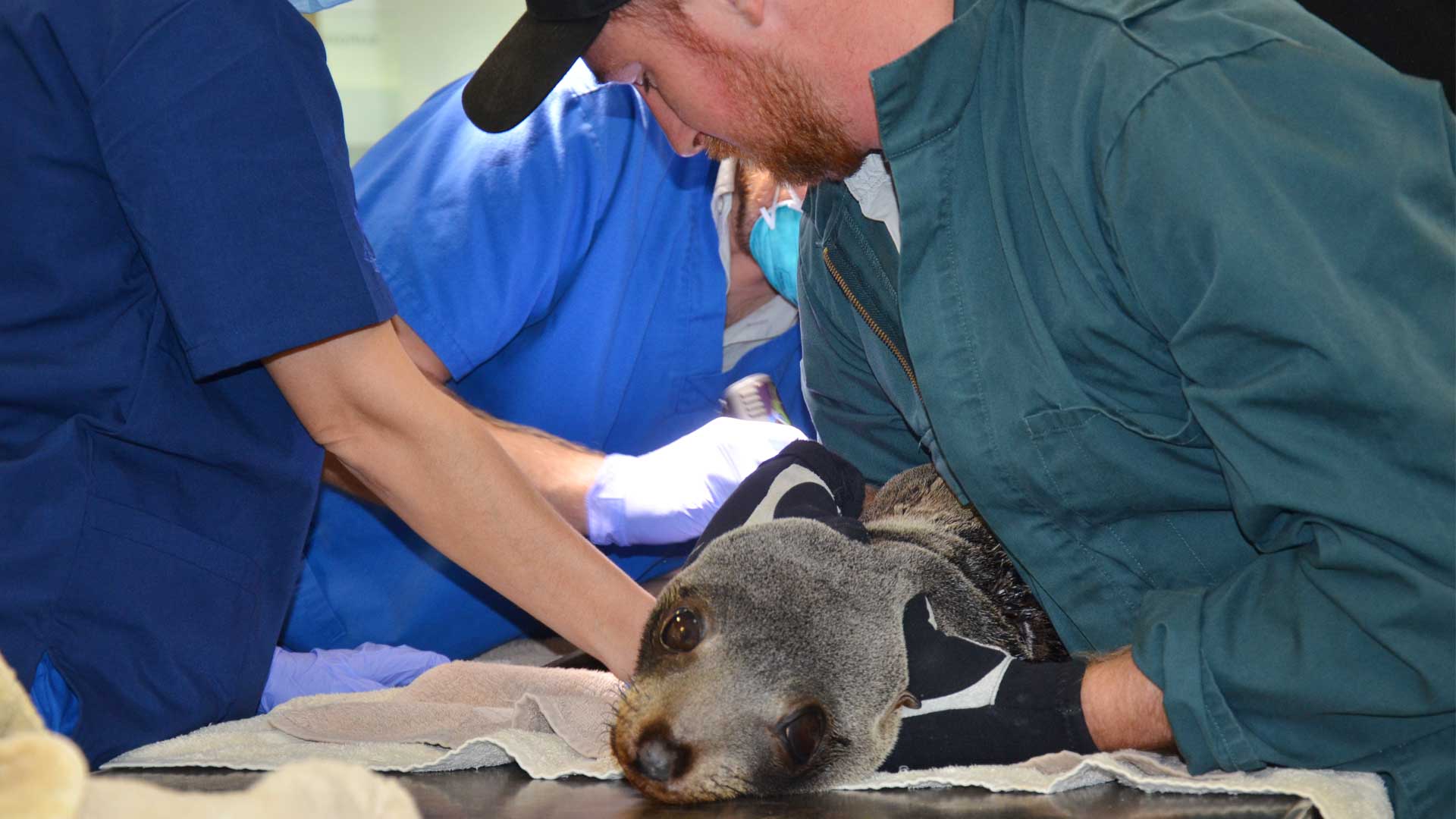 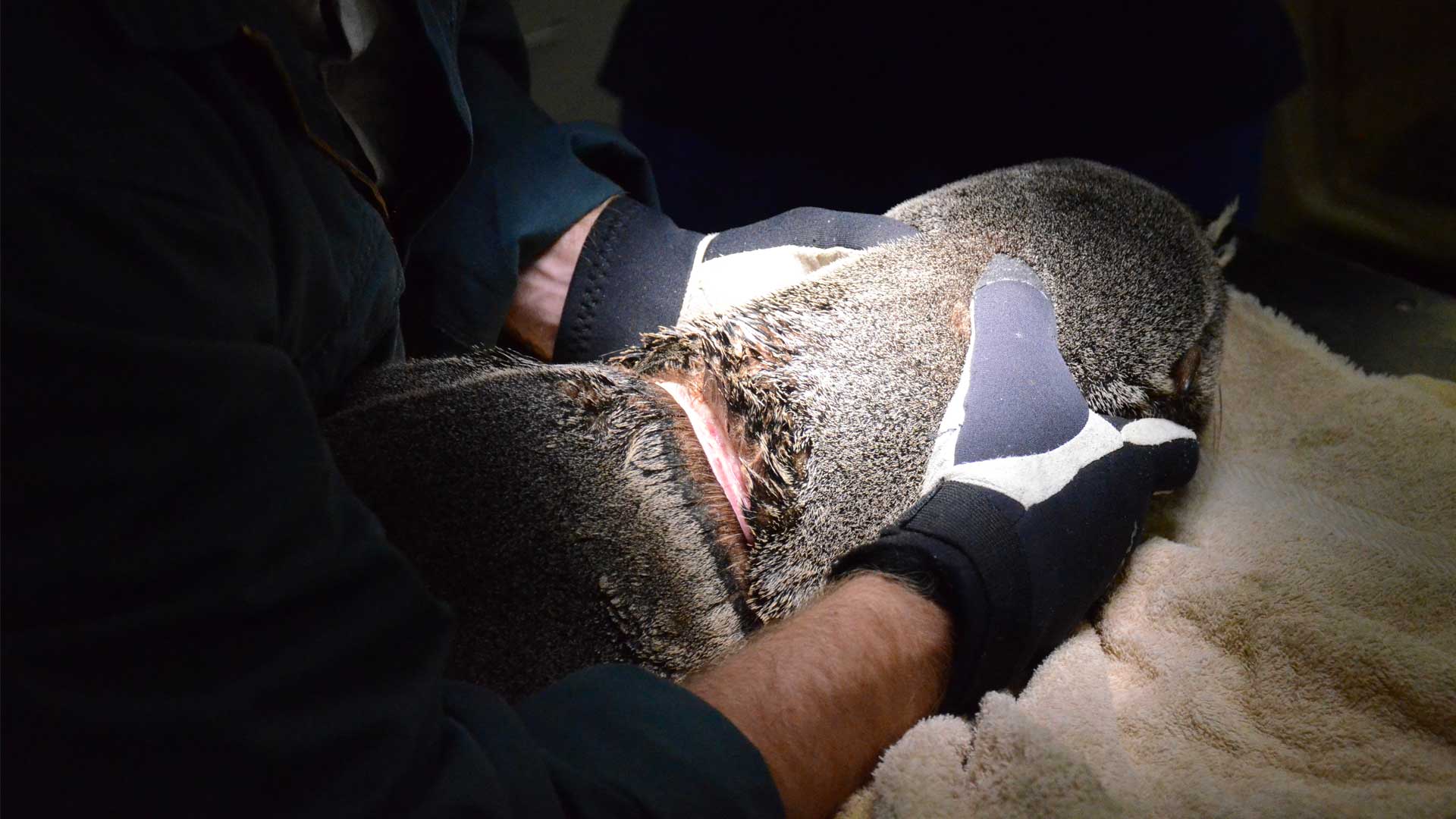 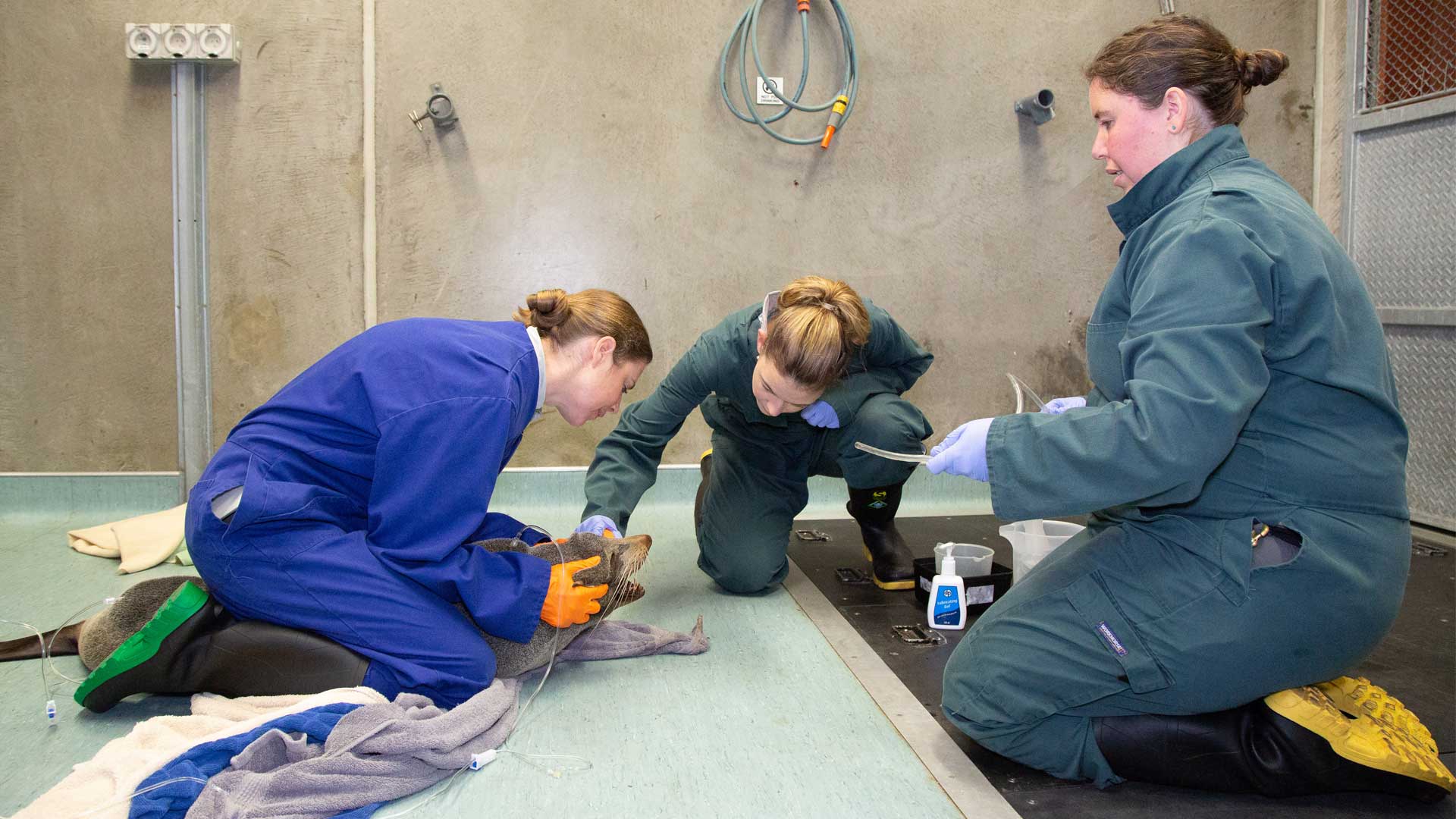 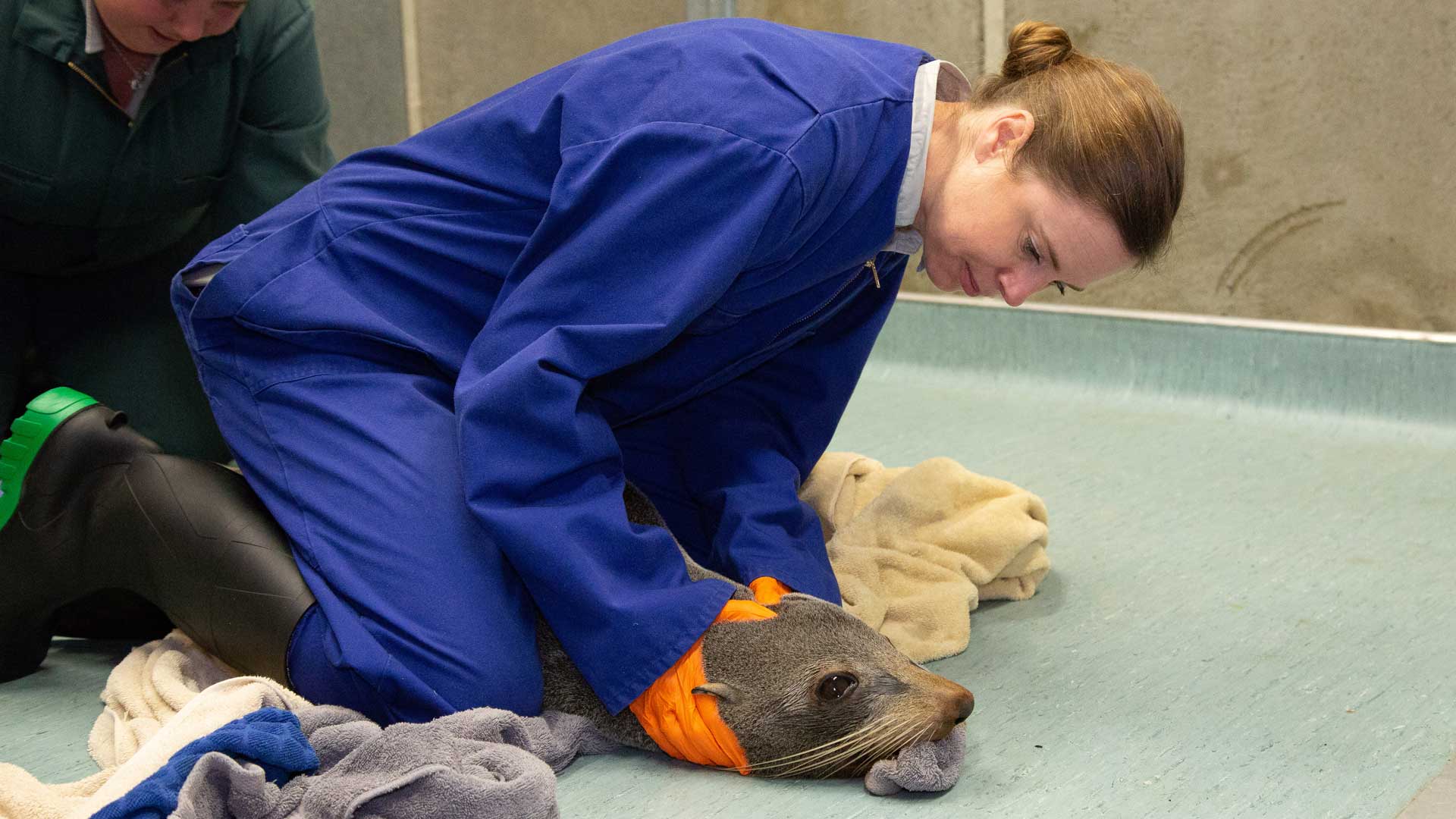 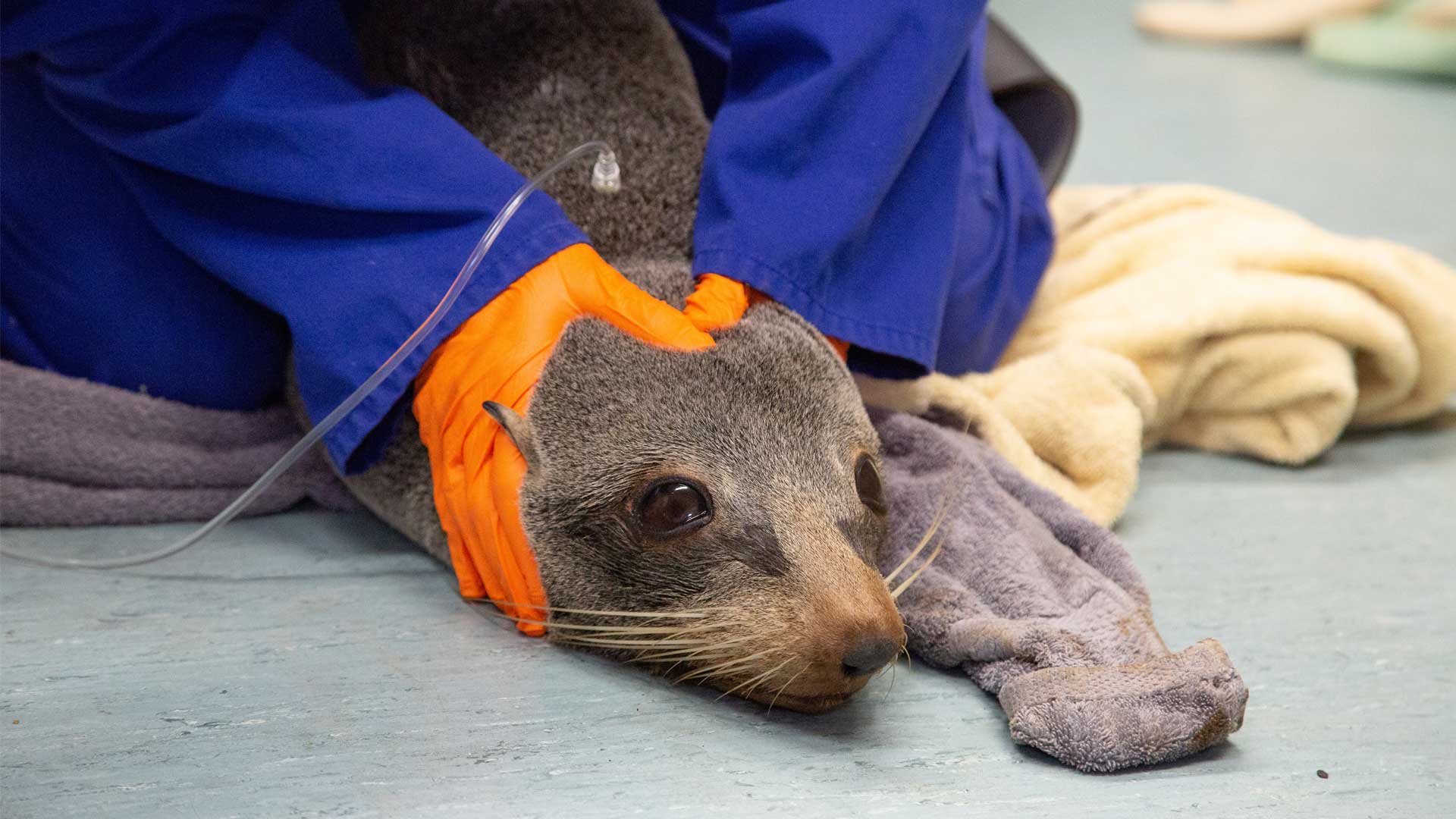 Last week, an 18-month-old New Zealand fur seal was found with fishing twine caught around its neck by a member of the public on Piha beach. Starving, exhausted and open to infection due to the wound created by the tightening twine, this is a sad reality of what can happen when we forget or disregard the importance of being a tidy kiwi.

Once realising the seal was in trouble, the member of public called our Wild Work partners the Department of Conservation (DOC), who then called our zoo vet and seal team to help out. Experienced Auckland Zoo Seal Keepers Odin Neil and Rosie Rolls, alongside the vet hospital Clinical Coordinator Mikaylie Wilson, met DOC Biodiversity Ranger Gabrielle Goodwin at Piha to safely capture the seal and transport him back to Auckland Zoo’s Vet Hospital for treatment.

The young seal was in a critical condition, with a deep encircling laceration to around 80% of its neck. It was quite alert to what was going on, but was very skinny. The key concern was the neck wound, making the seal vulnerable to infection, and then the risk of infection spreading to other parts of its body.

“If you are concerned about the health of a wild seal on the beach, the best thing you can do is watch it from a distance and then phone the DOC hotline if you are still concerned for its welfare,” says Dr James Chatterton, Auckland Zoo Veterinary Services Manager.

Unfortunately for this seal, by the time it reached our vet hospital it was extremely ill with life threatening injuries including – septicaemia, a serious system-wide infection due to its neck wound; very poor body condition, due to the wound and severe gastrointestinal parasite infestation; and had ‘fly-strike’, which is when flies lay eggs on the skin, which hatch into maggots and invade the wound. Despite 48 hours of intensive care – IV fluids, antibiotics, pain relief, supportive feeding and surgery to treat the wound, the seal sadly died.

If you are concerned about the health of a wild seal on the beach, the best thing you can do is watch it from a distance and then phone the DOC hotline if you are still concerned for its welfare

This year, Earth Day narrowed in on the harrowing issue of ocean plastic pollution. Every minute, one garbage truck of plastic is dumped into our oceans, and this is found as far as 11 km deep, meaning that synthetic fibres have contaminated even the most remote places on Earth. With many marine organisms unable to distinguish common plastic items from food, many will accidentally consume plastic at some point, or become entangled in it, which cause many life-threatening issues for our fascinating ocean dwellers.

Assisting our Wild Work partners in caring for wildlife is a large part of what the Auckland Zoo Vet Hospital does. When these animals are brought in, they are usually already gravely ill, often due to human impact, and the odds are stacked against the patient from the outset. The team is ever-passionate about protecting the welfare of their patients, and with their expertise can give some of these wild patients a fighting chance at survival.

If you want to learn more about our vet team’s work, or watch the team in action at the Auckland Zoo Vet Hospital, you can visit the website here. As a not-for-profit, your entry ticket contributes to our Wild Work – which includes national and international conservation initiatives, and directly funds our vet hospital allowing us to provide care for wildlife.