Kākāpō bravest of patients with personality plus | Auckland Zoo

Our Auckland Zoo Veterinary team is in awe of kākāpō patients Bravo, Huhū, Tautahi, and now Mati-mā and Hinemoa, for their fighting spirit (quiet and loud!) to overcome a very painful and debilitating illness.

‘A pain in the butt’ is an apt literal description for cloacitis (also called ‘crusty bum’) but it doesn’t even begin to convey the severity of what these precious birds endure.

Cloacitis is inflammation of the skin and mucosa (inner lining) of the cloaca - the hole through which kākāpō excrete waste and female birds lay eggs. In severe cases of cloacitis, deep and painful ulcerations develop which are debilitating, cause reduced appetite and weight loss, often become infected, and can ultimately lead to septicaemia (systemic infection) which could be fatal if left untreated.

“We still don’t know what causes this illness. It affects birds of all ages and doesn’t follow any clear pattern, but to date only affects kākāpō living on Whenua Hou (Codfish Island),” says our Veterinary Services Manager, Dr James Chatterton.

“These five cases occurring in rapid succession is very unusual. However, one positive thing is that we do know how to treat these severe cases successfully, and with oral antibiotics, anti-inflammatories and of course lots of pain relief, we know we can them feeling better and their lesions to heal.  Fortunately for us (and them), kākāpō are brilliant patients, and cope with being cared for in hospital really well, which is a good job as cloacitis is no quick fix and can take several months of intensive treatment to fully recover.”

The good news is that males Tautahi and Bravo, and female Huhū (all two-year-olds), who our Department of Conservation (DOC) Kākāpō Recovery Team colleagues flew up to us in late February, are now all recovered and thriving back home on Whenua Hou. 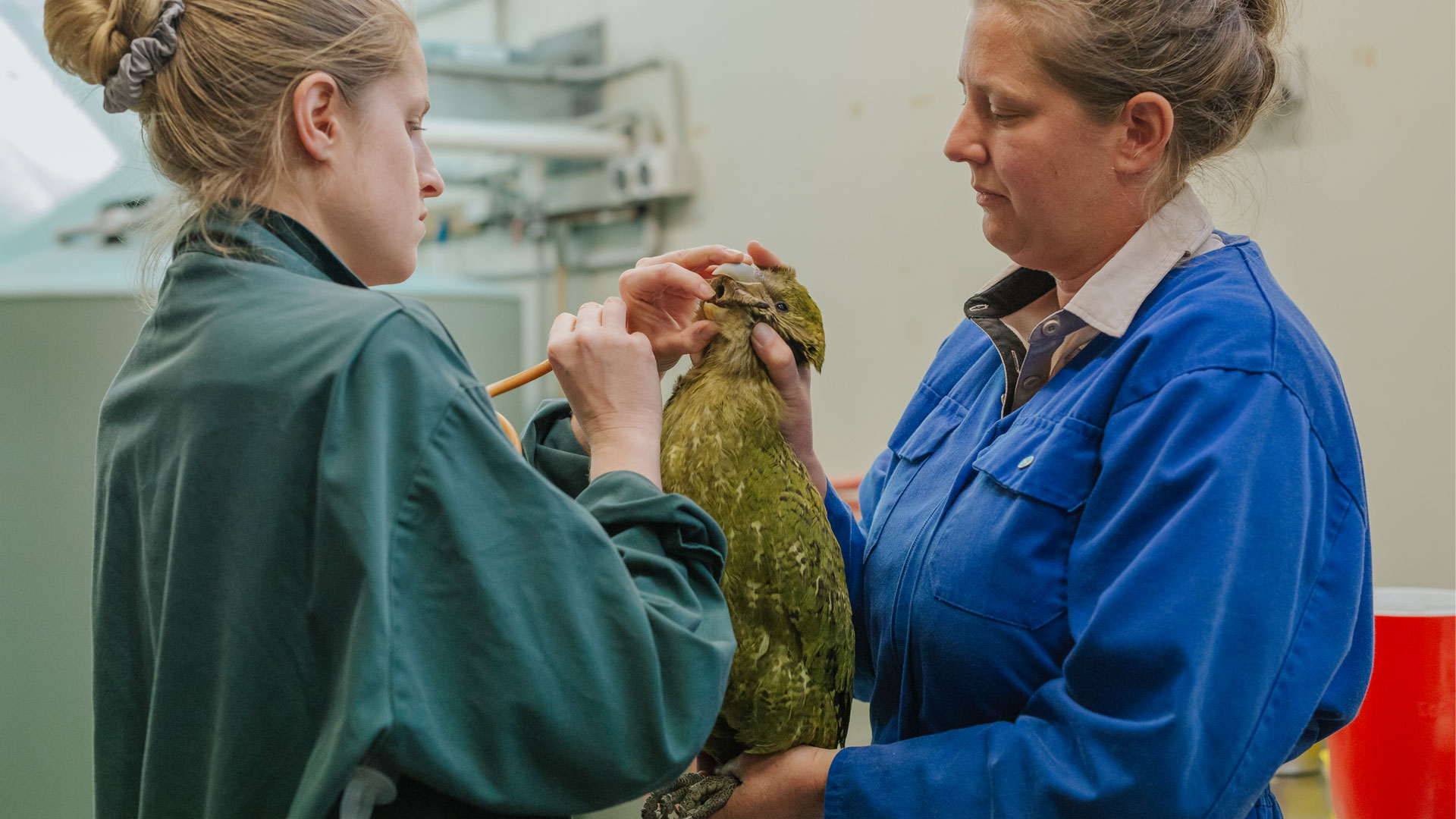 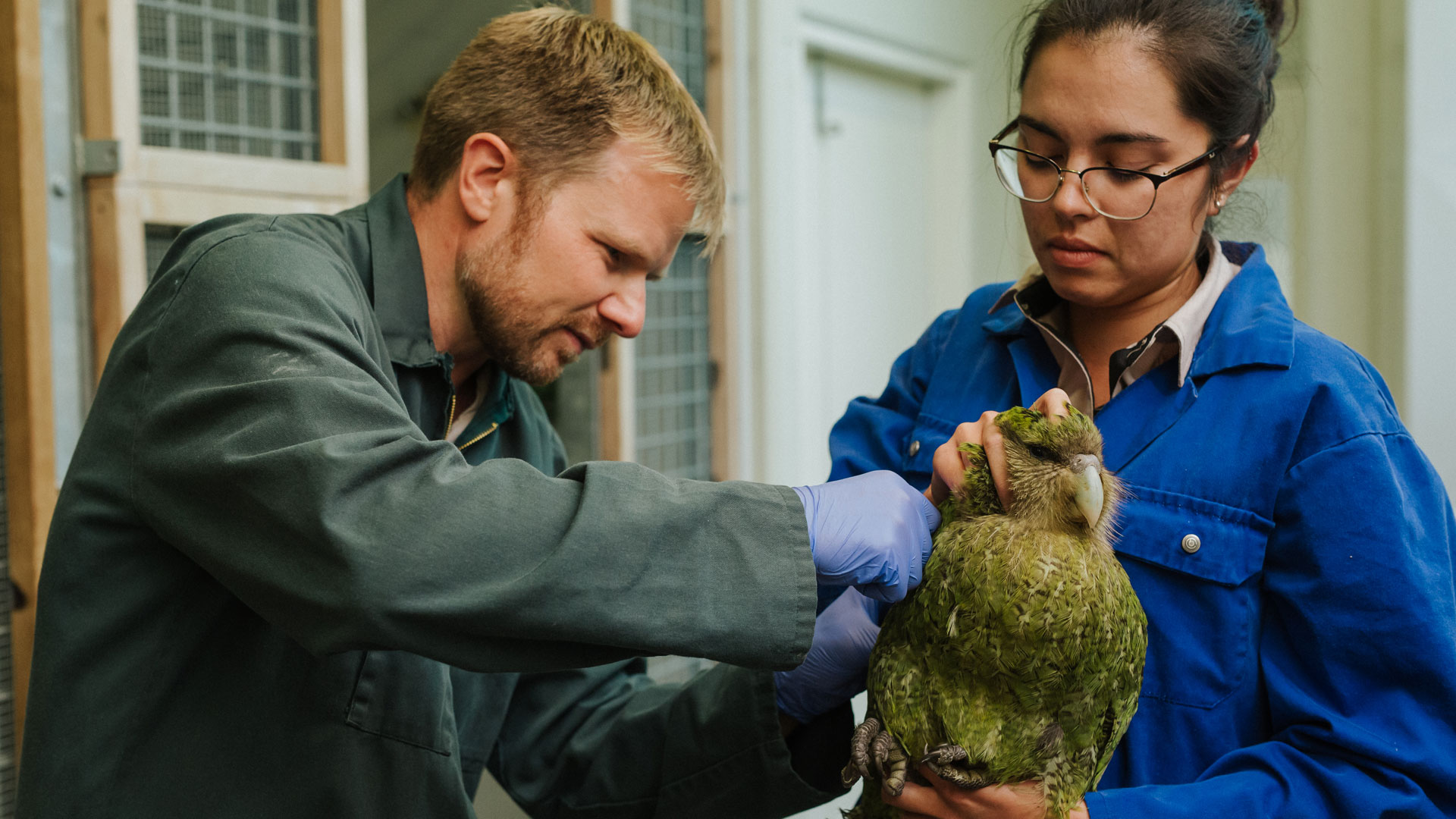 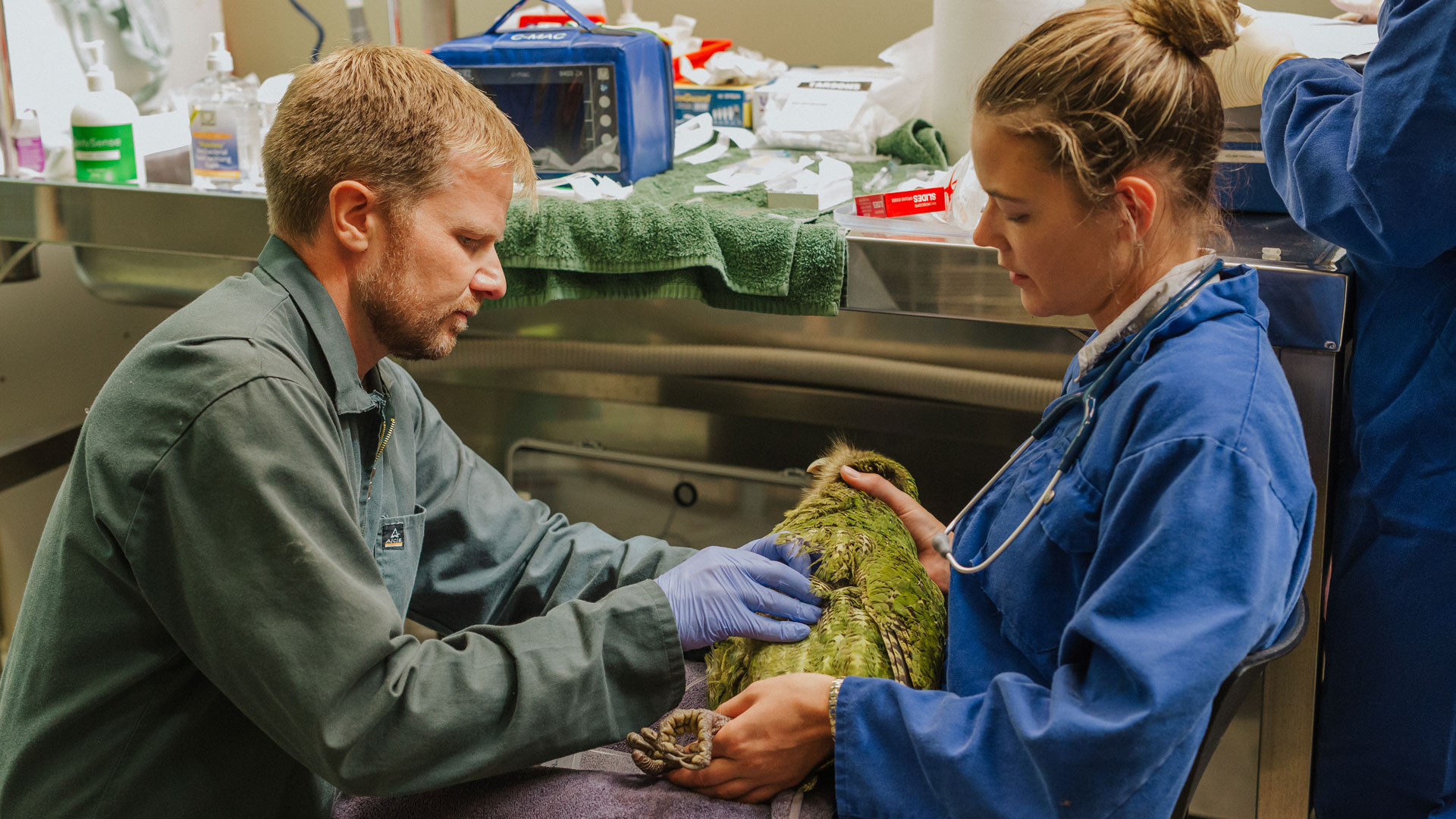 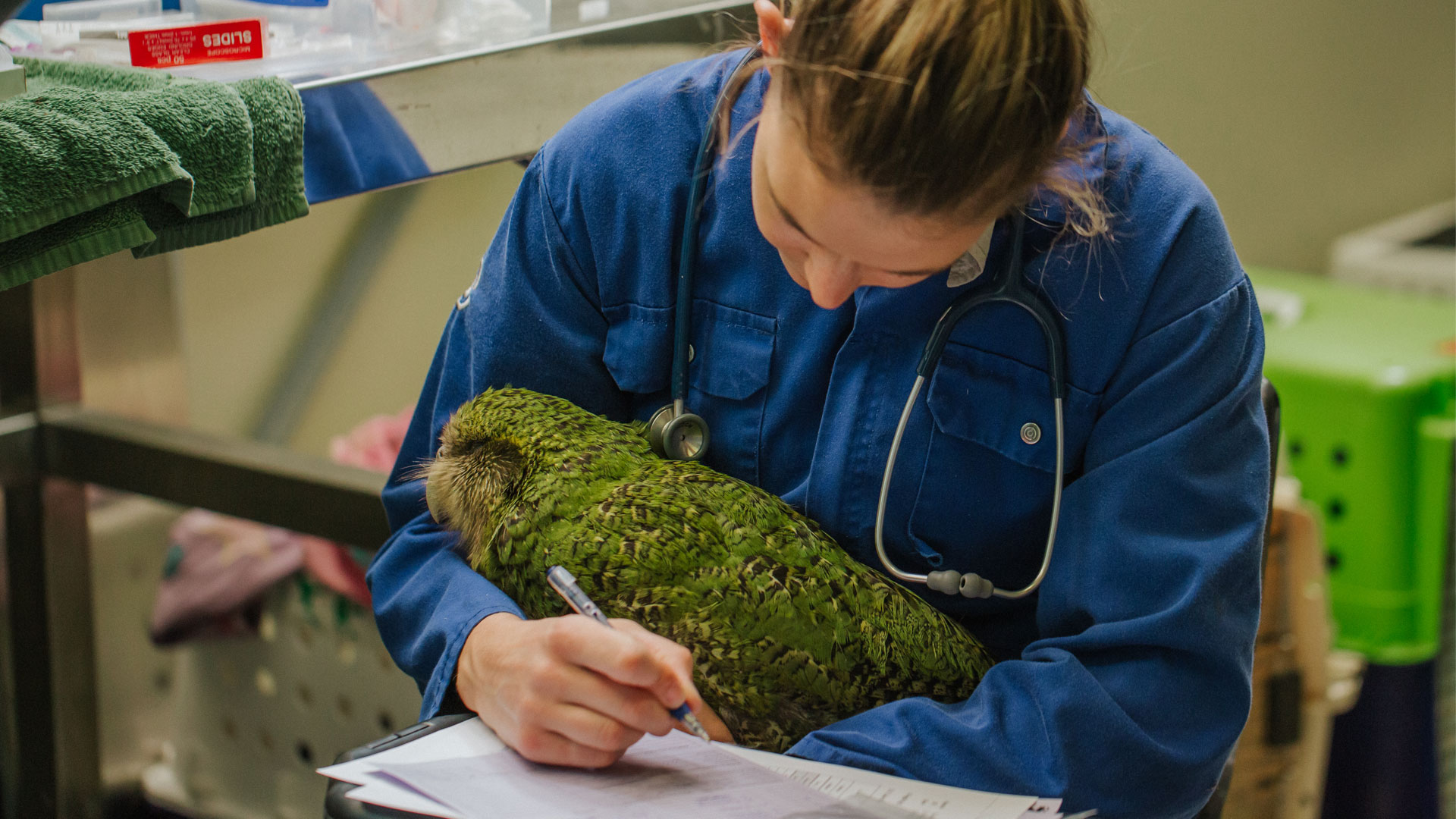 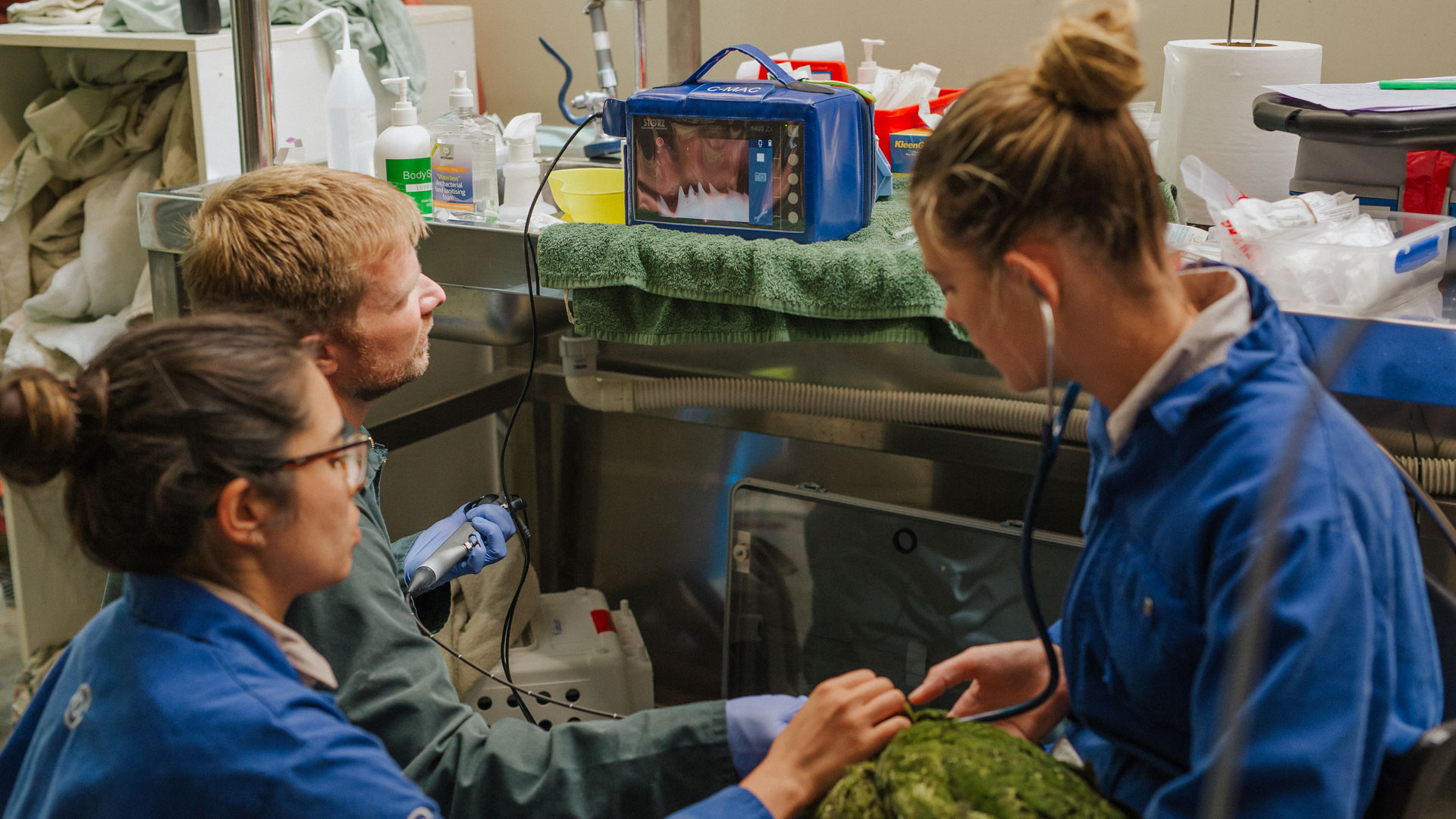 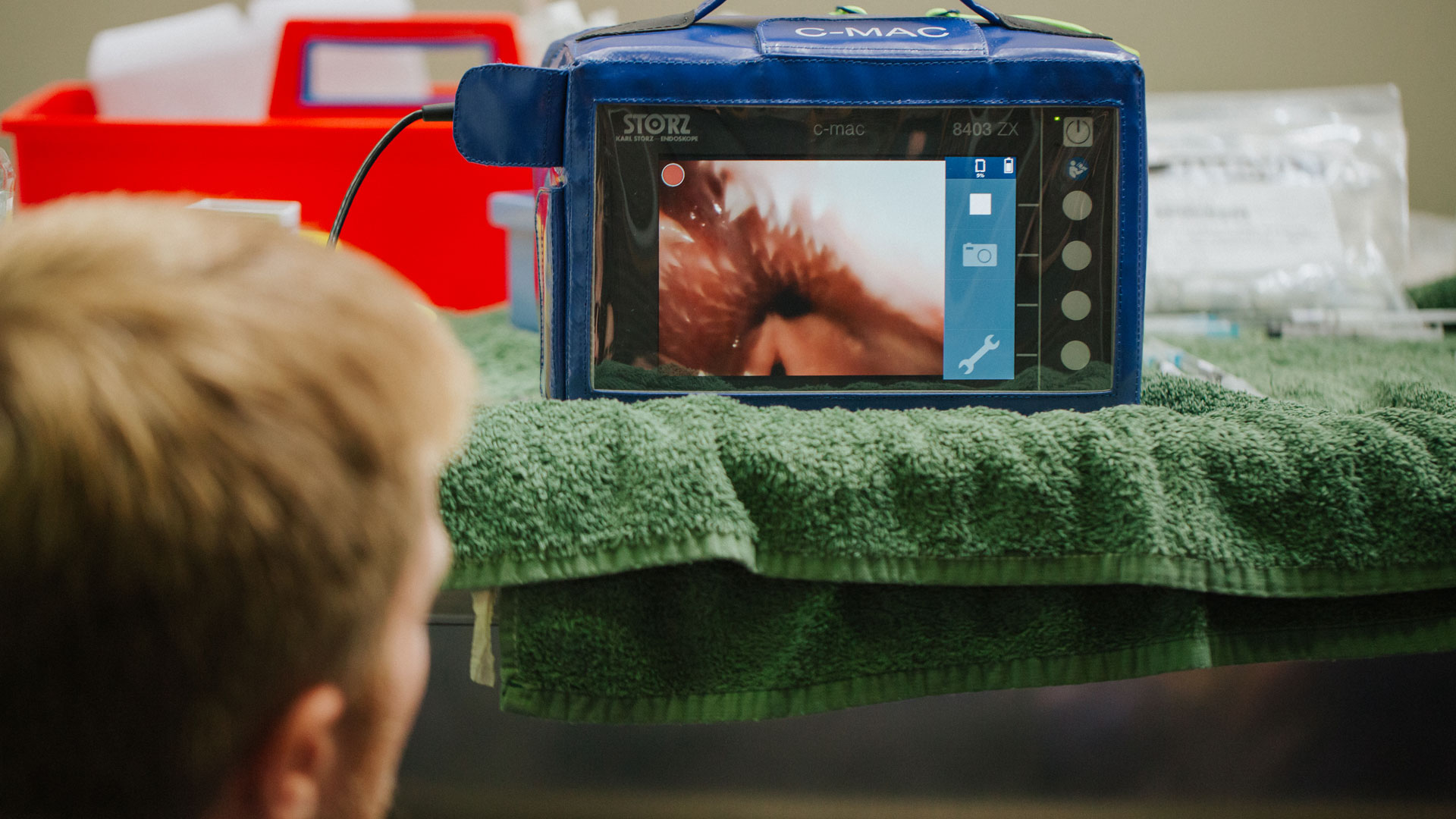 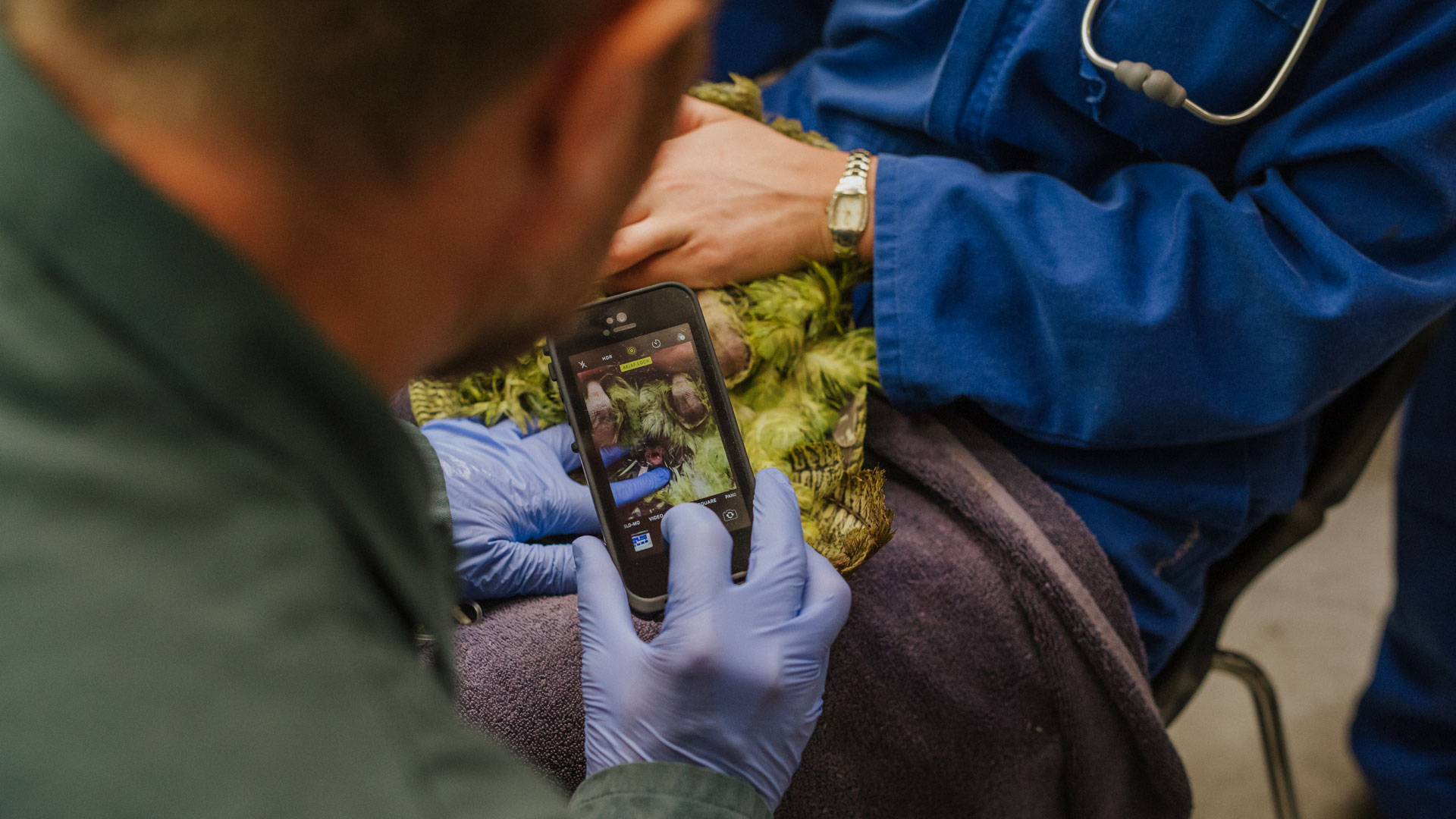 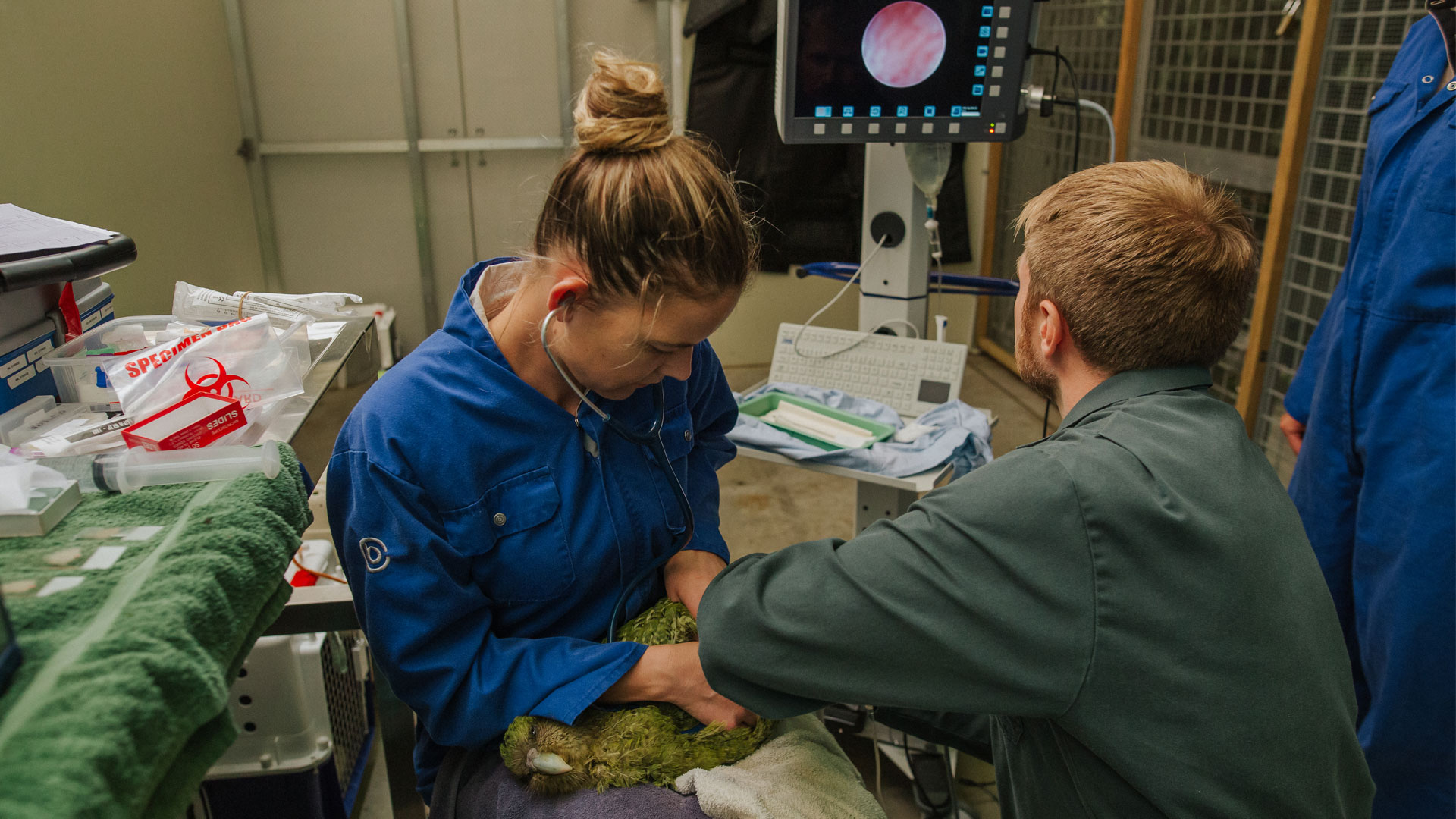 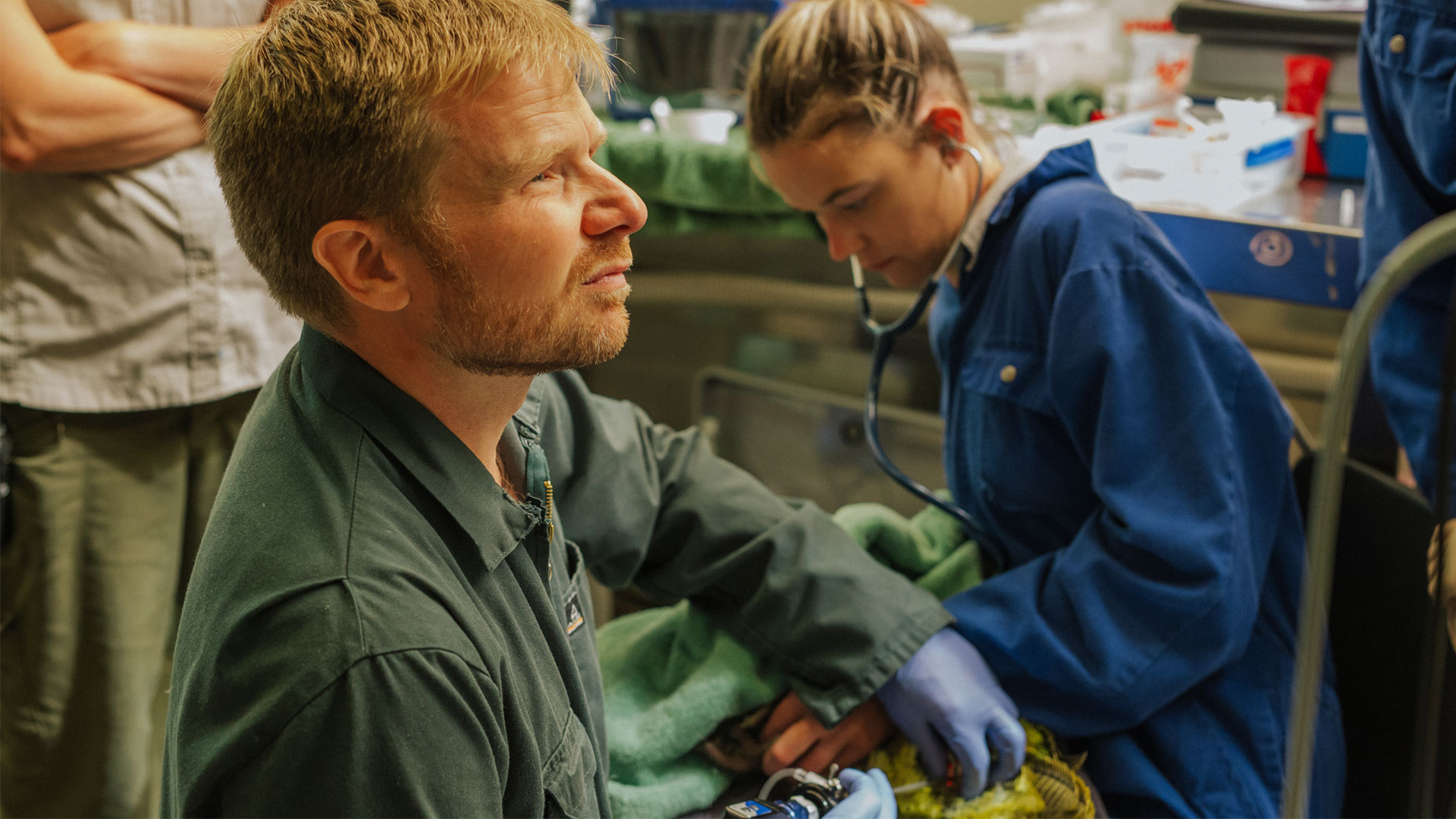 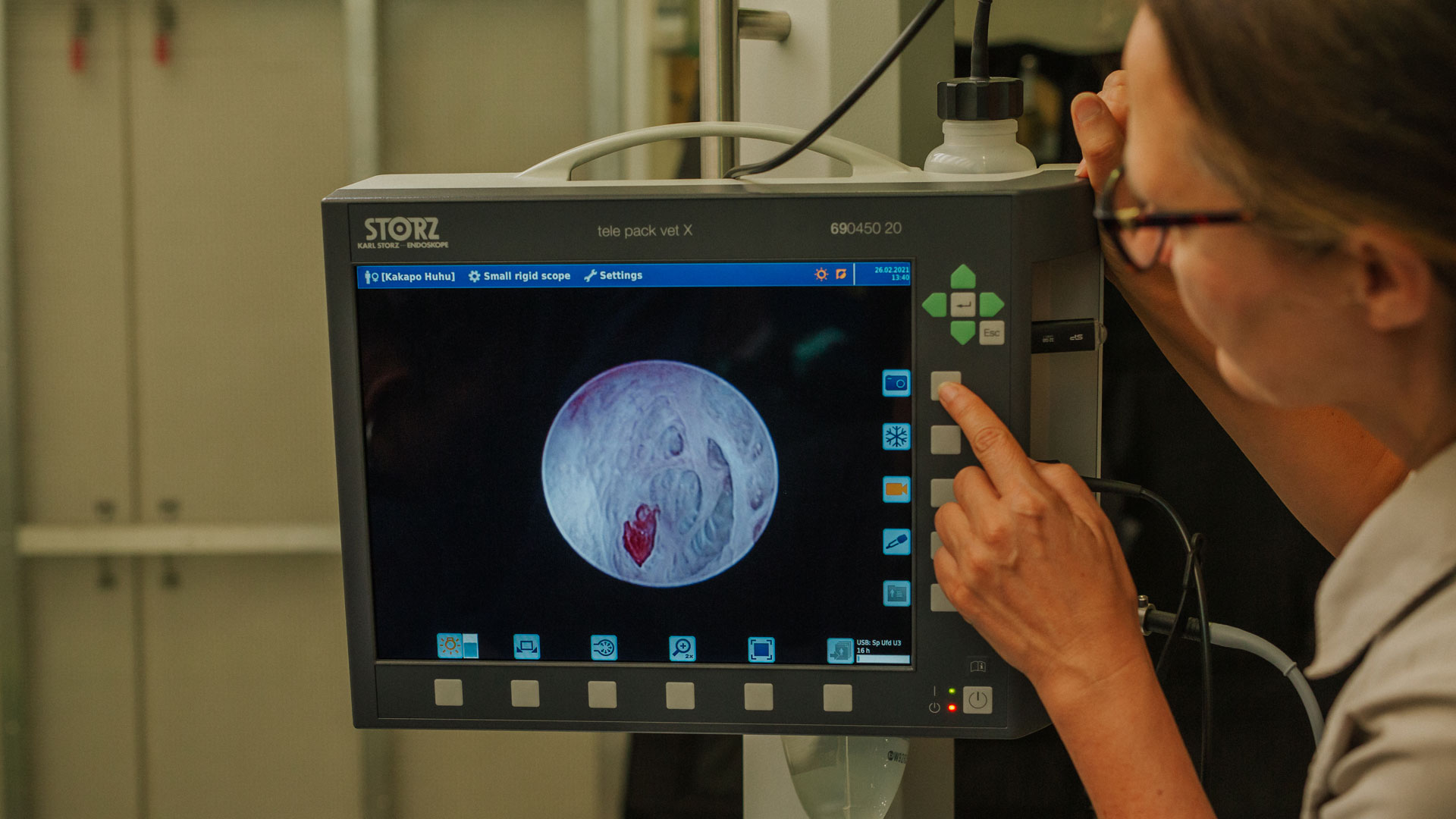 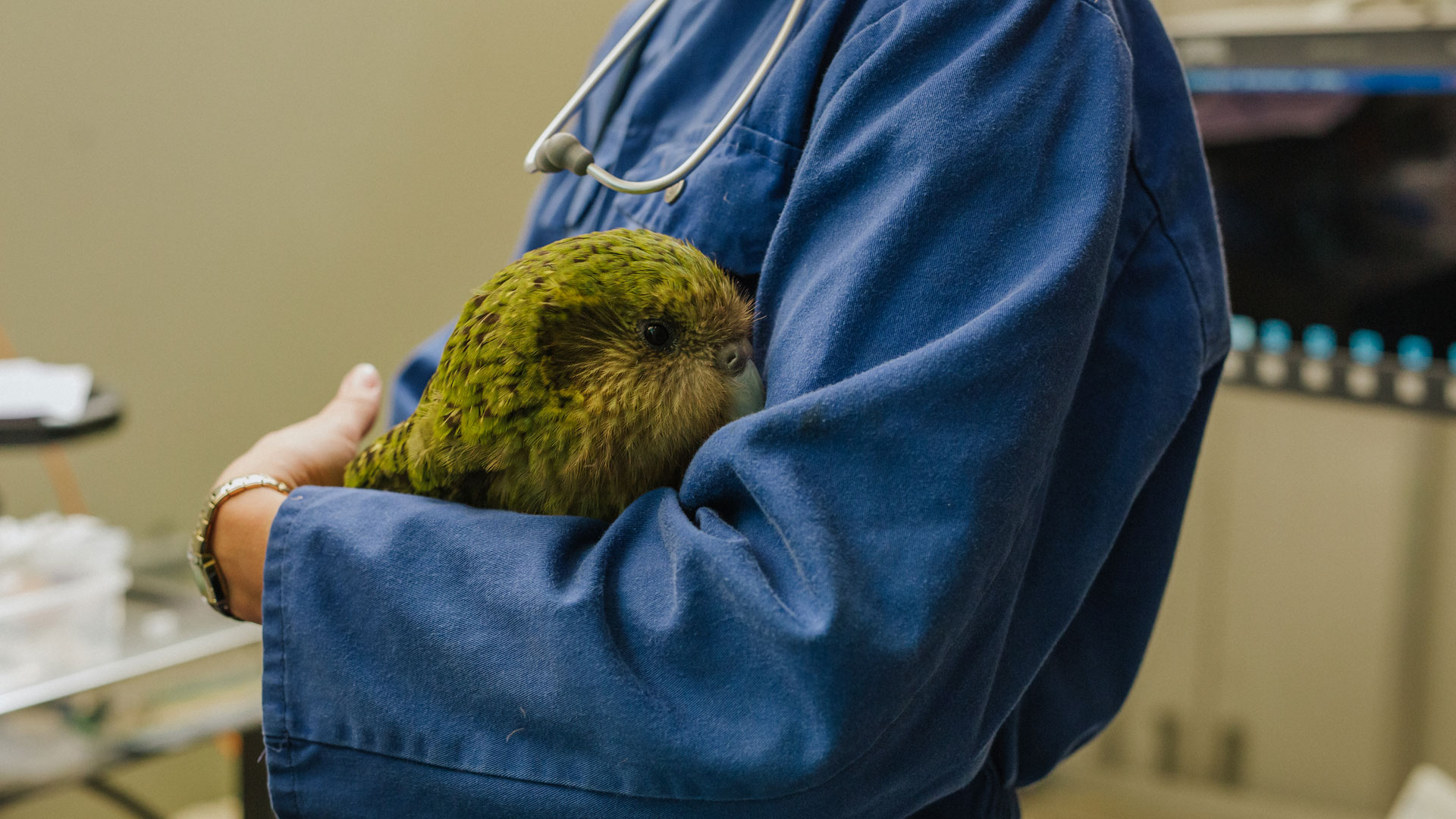 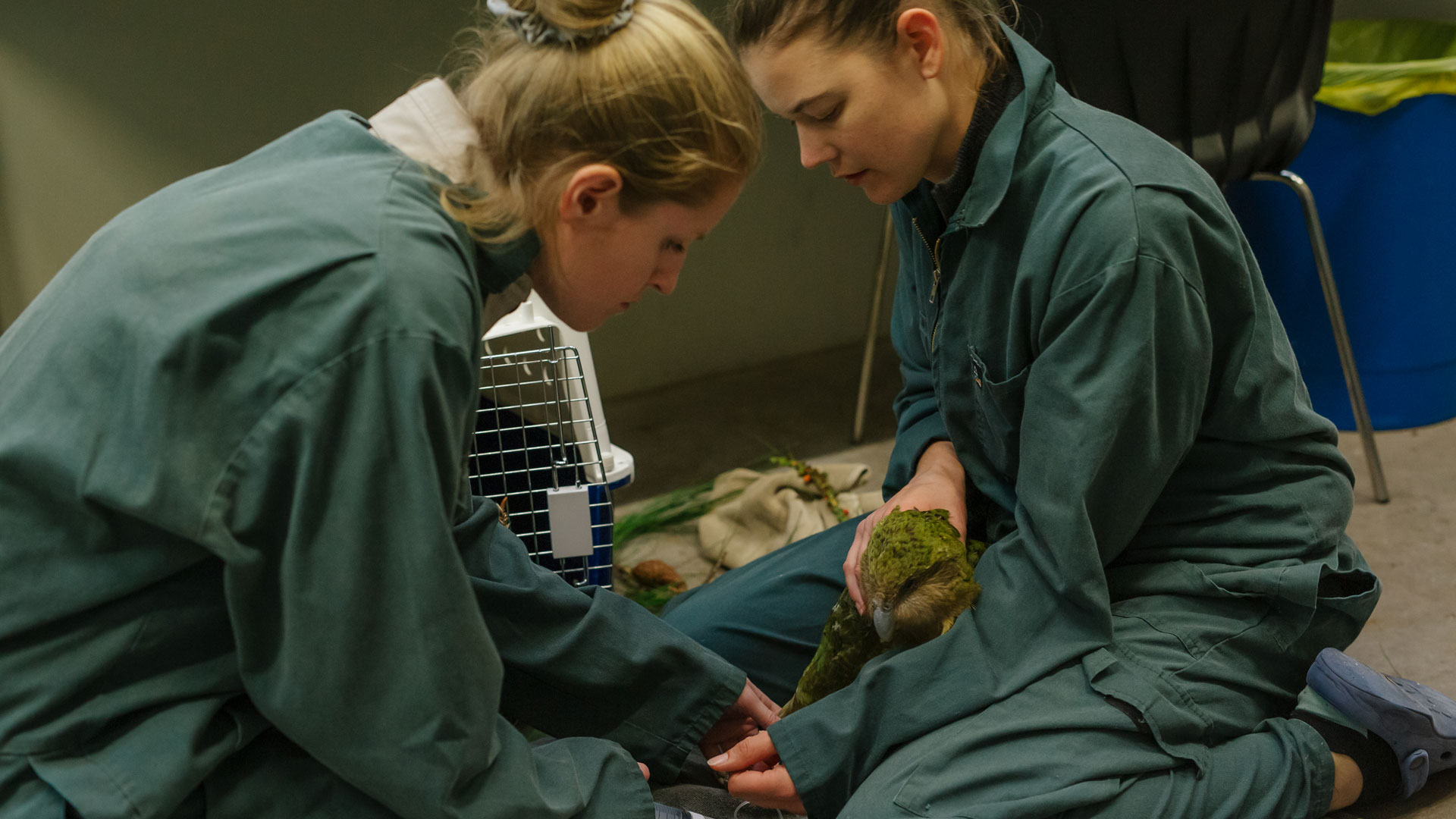 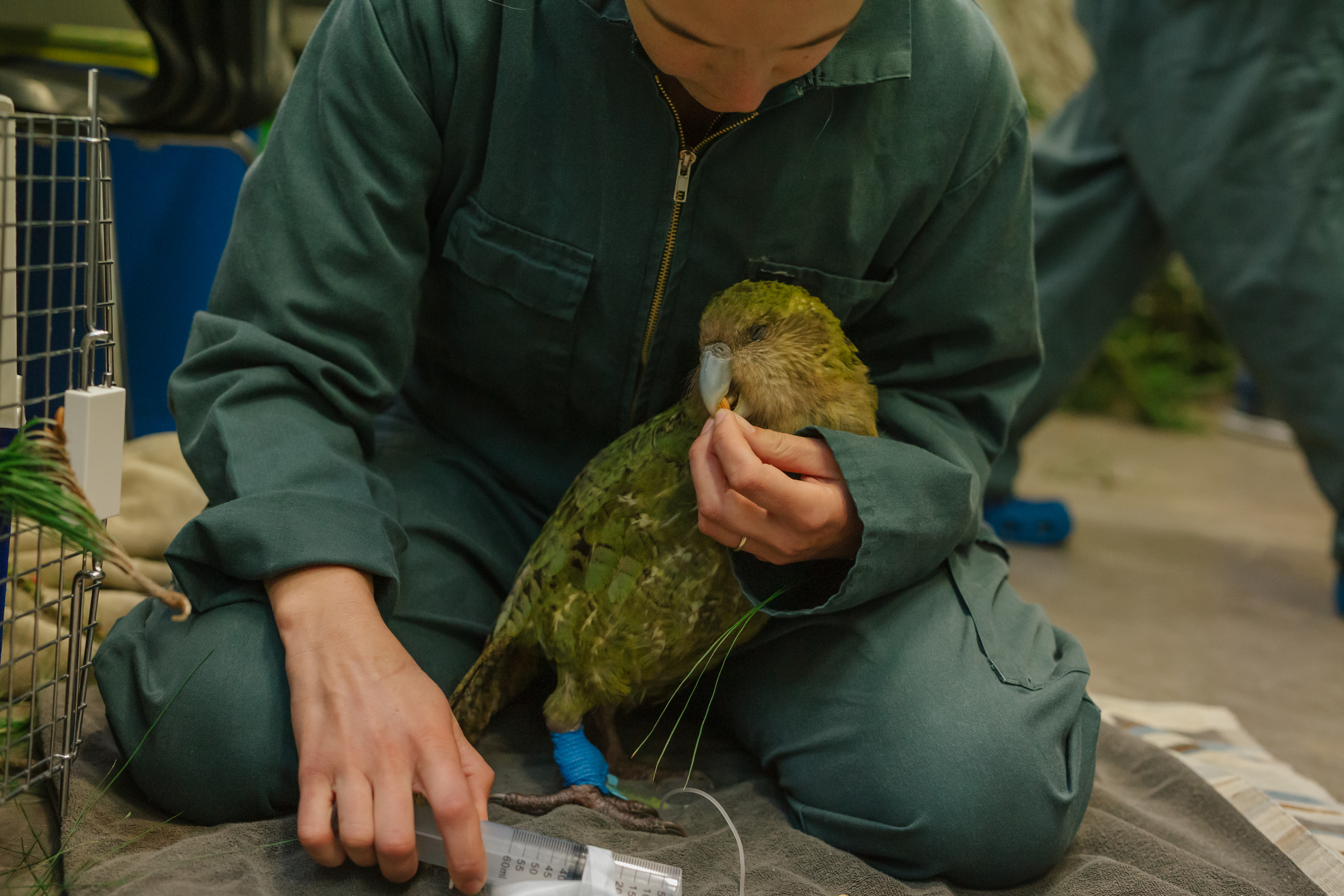 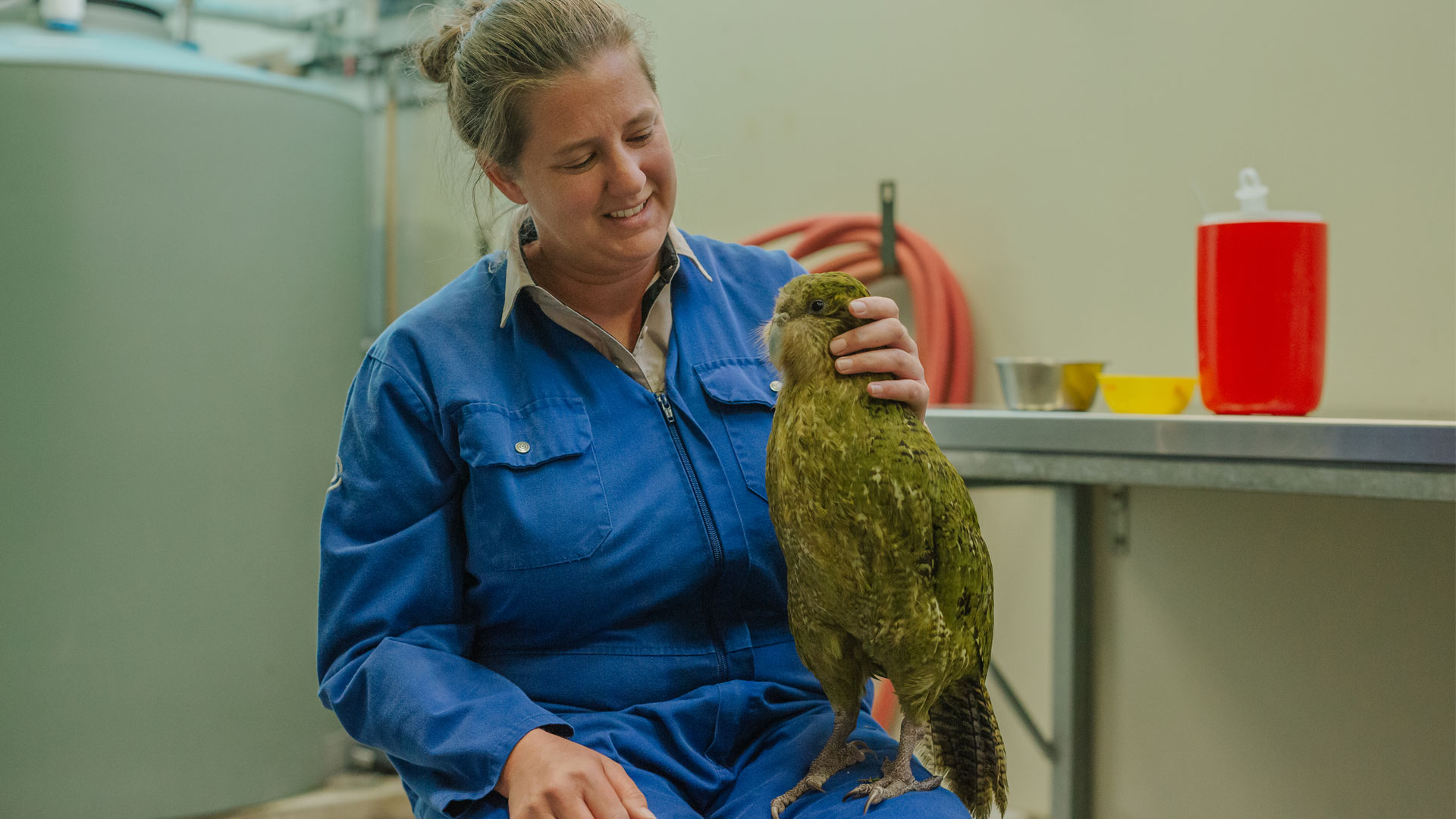 Dr An checking the screen during kākāpō Huhū's endoscopy

Dr An checking the screen during kākāpō Huhū's endoscopy

Female Mati-mā (coincidentally Tautahi’s sister) who arrived at our vet hospital in early April is almost totally healed and should return home in early July.  Adult female Hinemoa, who arrived in May, will be with us a little while longer as her lesions are much reduced, but haven’t totally resolved yet.

“Severe cases of cloacitis, like we have seen in Mati-mā and Hinemoa, are about as bad as it gets,” says James, “but we are privileged to be able to care for these taonga and really look forward to their return to full health and seeing them return home before too long.”

Each bird is fitted with a backpack transmitter – a super smart light piece of kit that uses a range of signals to remotely record its activities out in its bush territory. Using receiving equipment at their base, the team is able to regularly check in on the birds. Using this technology, the team can notice when a bird is showing abnormal activity patterns, which allows the rangers to know which bird they need to check up on. It was this process that led to Huhū, Mati-mā and Hinemoa being identified recently, and these cases were therefore earlier in the disease process than would have been possible in previous years.

Following a short flight from the island to Invercargill (by helicopter or a small plane), Air New Zealand flies these VIPs (‘Very Important Kākāpō) up to Auckland free of charge. Secure in their special carry crates, these precious flightless parrots are buckled into spare seats to then wing their way safely and swiftly to Auckland Zoo’s vet hospital.

Hydration, tube-feeding, pain relief and antibiotics are our vet team’s first priority for these ill patients. Once stabilised, more in-depth health checks under general anaesthetic can be done – cleaning and applying topical treatments to lesions, taking blood samples, radiographs (“X-rays”), and sometimes CT scans and endoscopy. The latter involves inserting a tiny camera into the kākāpō’s cloaca to help vet staff visualise and assess parts of the cloaca not visible from the outside.

Highly nutritious food is crucial for sick patients and includes tube-feeding with a “smoothie” of balanced, calorie-dense bird-specific food together with as much browse (their favourite native plants) as our Horticulture team can supply, as well as certain vegetables, fruits, nuts and seeds.

We still don’t know what causes this illness. It affects birds of all ages and doesn’t follow any clear pattern, but to date only affects kākāpō living on Whenua Hou (Codfish Island).

“Although we can provide full nutrition with tube-feeding, the patients that settle in quickest and eat some additional food by themselves often improve quickest. Bravo excelled in this respect,” explains James. “From the first day he arrived he ate everything we offered him - he’s so food orientated, he’s like the cookie monster!”

James describes Bravo as a bold stocky bird, who always seems happy, and takes his treatments without complaint.

“Every morning when we came in, we’d find Bravo’s hospital pen, that we fill with lots of browse for perching and hiding, looking like he’d had this full-on party. He’s shorter than some of the other males, and if he were human, I think he’d be this stocky front-row forward.”

In contrast to Bravo, James says Tautahi, who the team also treated in March 2020 for cloacitis, has inherited his dad Kōmaru’s genes. “He’s a tall lean bird – the equivalent of a 6’4 rugby lock, who’s very strong, vocal, and likes to let us know who’s boss”.

Tautahi, like most kākāpō, was a quick learner, and the vet team taught Tautahi how to use a food ‘hopper’ - something he hadn’t done before, but needed to learn, as he will be offered food from one on the island in the future.

The food hoppers are a specific size and height such that when used on the island, only kākāpō can access the food. There is a platform underneath the hopper that the birds are used to standing on whilst they feed and the rangers can then place automatic scales underneath this platform, so that they can remotely weigh the birds, which is another great way to monitor the health of these taonga.

Female Huhū arrived at Auckland Zoo’s vet hospital arrived whilst Tautahi and Bravo were also present. Claire Cameron, a specialist bird keeper and now vet nursing assistant at the vet hospital, has a real soft spot for Huhū. Claire cared for the very young Huhū back in 2019, when she spent many months in hospital being treated for aspergillosis during an outbreak of this devastating fungal disease. Then, just a week after Huhū returned home with a clean bill of health, she got herself caught up in a branch and sustained a wing injury and was back in Auckland Zoo for another couple of months of vet care! In total, Huhū has spent more than nine months in the vet hospital!

“Huhū is quietly mischievous, sitting quietly when you are watching, but then when you have turned you back Huhū will sneak off to explore and try to find a new piece of browse to chew, climb up, jump off, or break” says Claire. “Every night she would do something a little different, including dragging a pile of leaves into her nice clean water dish, so it was always interesting to see what concoction she’d created overnight. One of Huhū’s great attributes as a patient is that she’s incredibly tolerant of us, and very calm when needing to be handled. As much as we love her, I told her numerous times that I never want to see her again - unless it’s on the island!”

As zoo vet James explained earlier, Mati-mā has had a severe case of cloacitis, causing septicaemia and a lot of weight loss (she weighed just 970g on arrival, whereas she is now a healthy 1600g). Unlike Huhū, Mati-mā had never previously left the island until she developed cloacitis. “Mati-mā is feisty and vocal during her treatments” says James. “but takes it all in her stride and is now eating really well, almost as much as Bravo did.” The great news is that after more than two months of vet care Mati-mā’s lesions are almost healed, is otherwise back to normal, and so should return home in July.

Twelve-year-old female Hinemoa has been in vet hospital for just over a month.

Hinemoa is typical of many adult female kākāpō in vet hospital – she is quite calm overnight, eats small amounts of her favourite food, but is then also very happy to be vocal and tell us off when we are giving her the twice daily medications.

However, her cloacitis lesions are far from typical, with the most severe mucosal lesions (inside the cloaca) that we have ever seen.” explains James. “Despite their severity, Hinemoa’s cloacitis lesions have reduced in size considerably and she is gaining weight, but we think it will be several weeks until she is back to full health and can return home,” says James.

Getting to the bottom of crusty bum

The research, which includes a number of PhD and post-doctoral researchers, is examining multiple possible causes such as infectious disease, the role of genetics and other environment factors including nutrition. “Hopefully we will get to the bottom of it one day!” says James.

While veterinary care and treatment goes on for these individual cases of cloacitis, there is also more than a decade of science and research that is continuing. There are multiple partners, including Auckland Zoo, that all work collaboratively with DOC’s Kākāpō Recovery with the aim to understand the cause of cloacitis. Ultimately, it is hoped that an effective prevention can be found for this debilitating disease in this unique, critically endangered and enigmatic species.

We have a new VIP patient at the Auckland Zoo Vet Hospital!