Among the 209 kākāpō in the world is Bella Rose, one amazing and inspirational bird who’s had a heck of a tough time with her health this winter.

This remarkably calm and stoic patient was flown up from her Southland home, Whenua Hou (Codfish Island), to our Auckland Zoo vet hospital in late June suffering from one of the worst cases of cloacitis (commonly called ‘crusty bum’) our veterinary team has ever seen. Such was its severity she had lost over a third of her body weight.

We’re happy (and relieved!) to share that Bella Rose - a precious founder and valuable breeding kākāpō discovered on Rakiura (Stewart Island) in 1982 - is now well on the road to recovery, though she’s still not quite out of the woods yet.

Exudative cloacitis is inflammation of the cloaca and to date has only been found in kākāpō on one island – Whenua Hou. Like all birds, kākāpō have a cloaca which is a single hole through which they excrete urine and faeces and female birds also lay eggs through this same hole. With cloacitis, the skin and mucosa (inner lining) becomes inflamed, with deep ulcerations developing and there is often infection and faecal matter caked all around the area – this adds to up to an extremely painful and debilitating lesion.  Auckland Zoo vets, together with Department of Conservation (DOC) and numerous other scientists and vets, are still trying to get to the bottom (no pun intended) of what causes cloacitis, and whether cases can be prevented in the future. 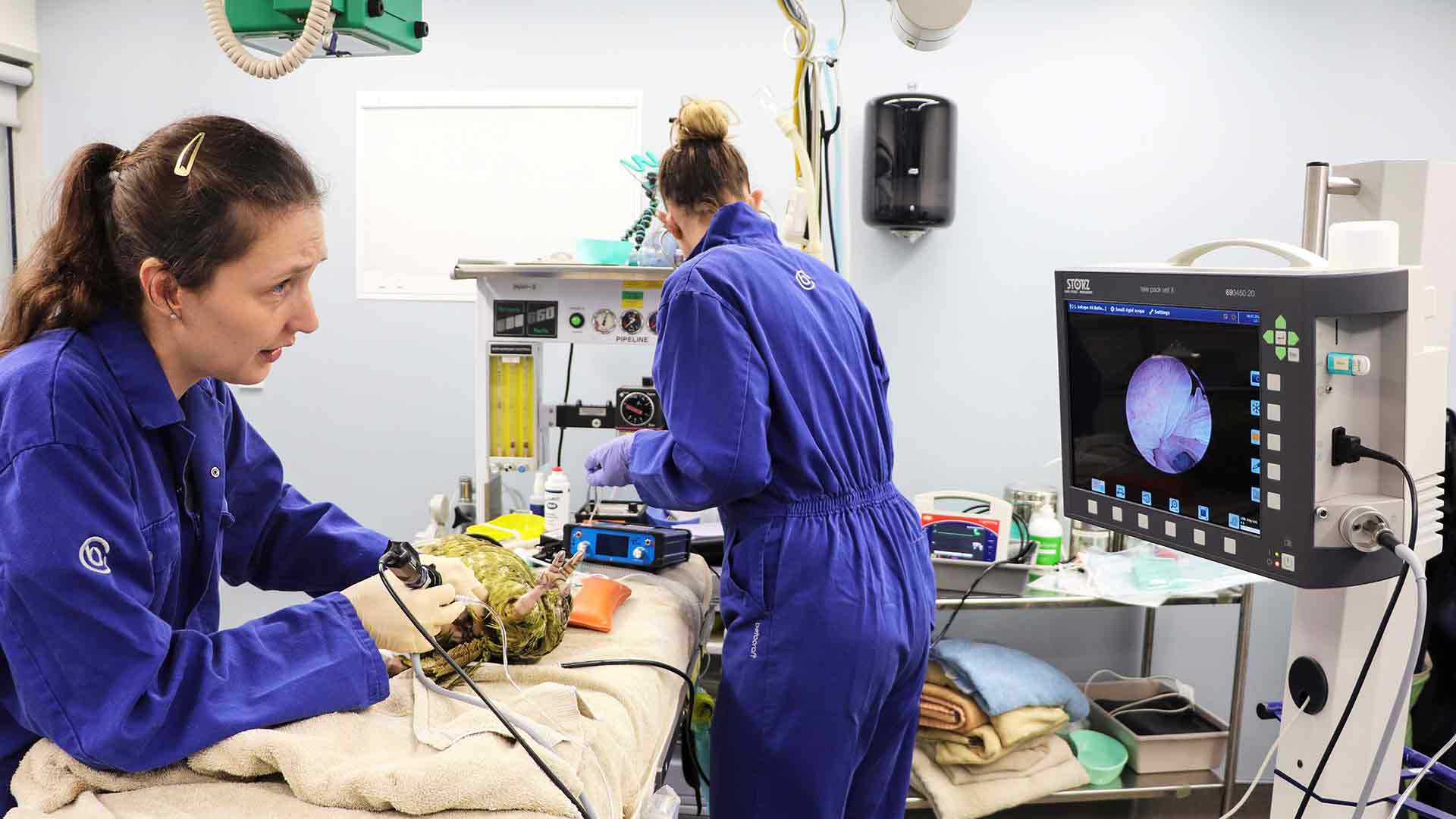 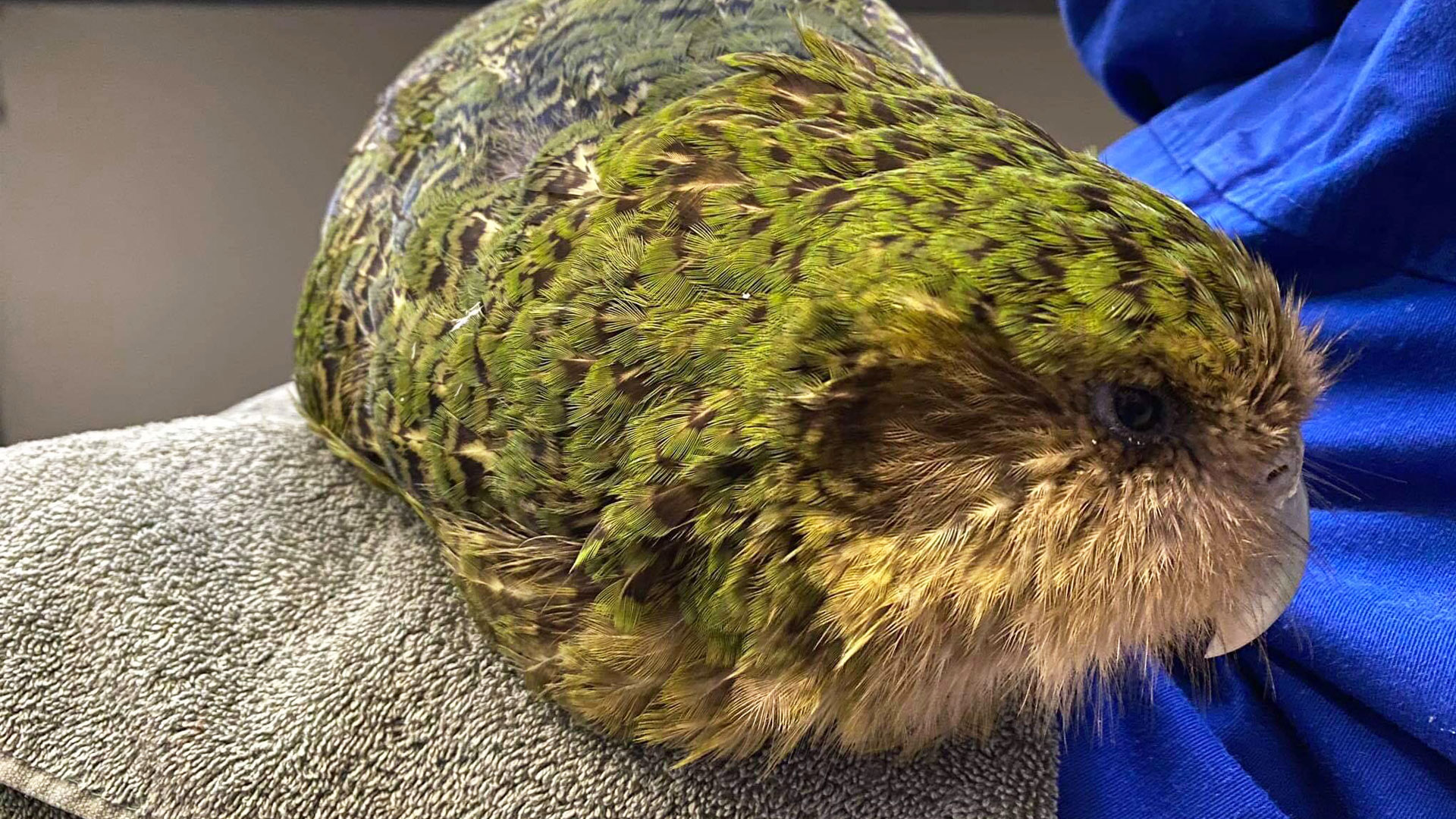 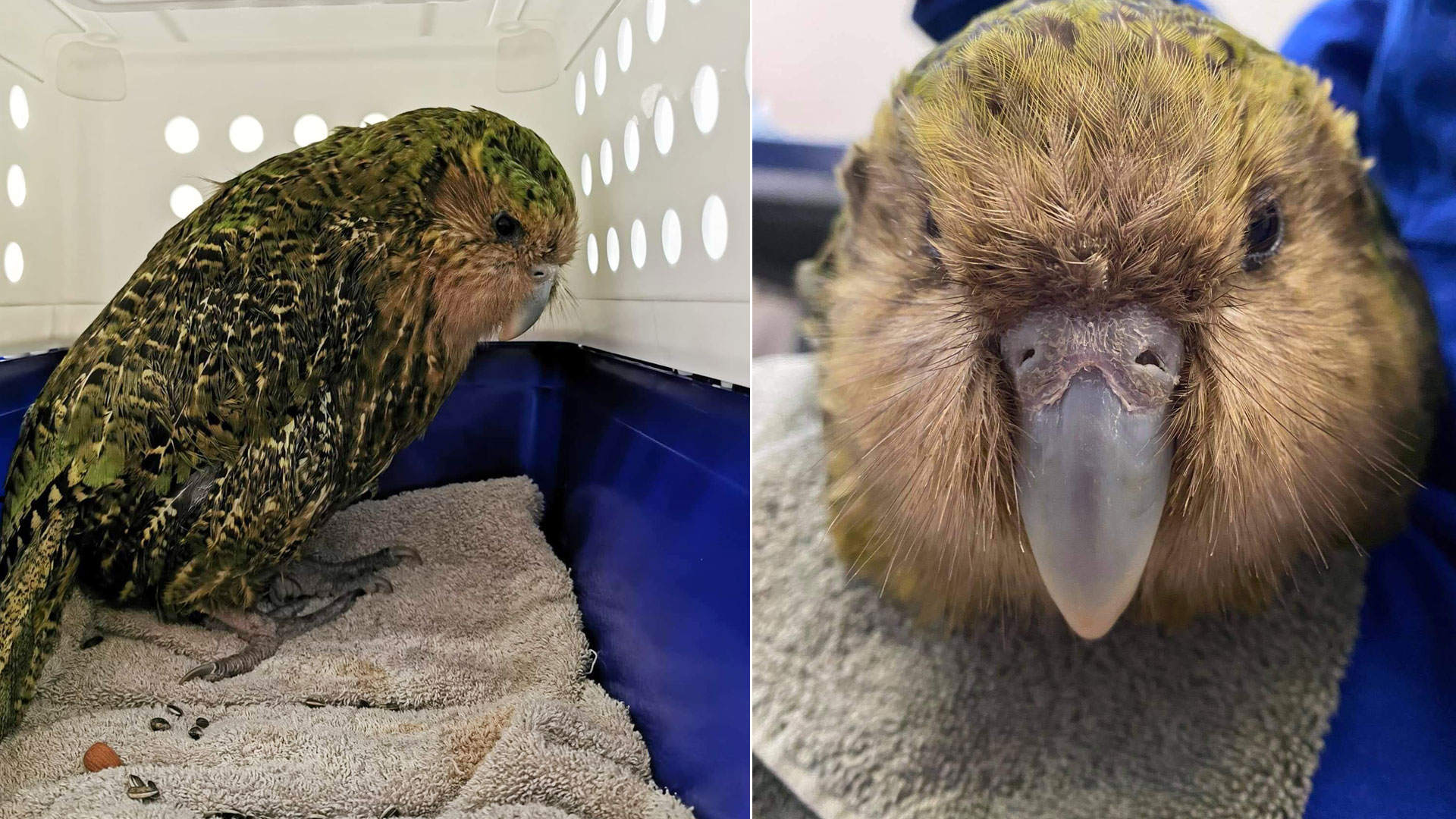 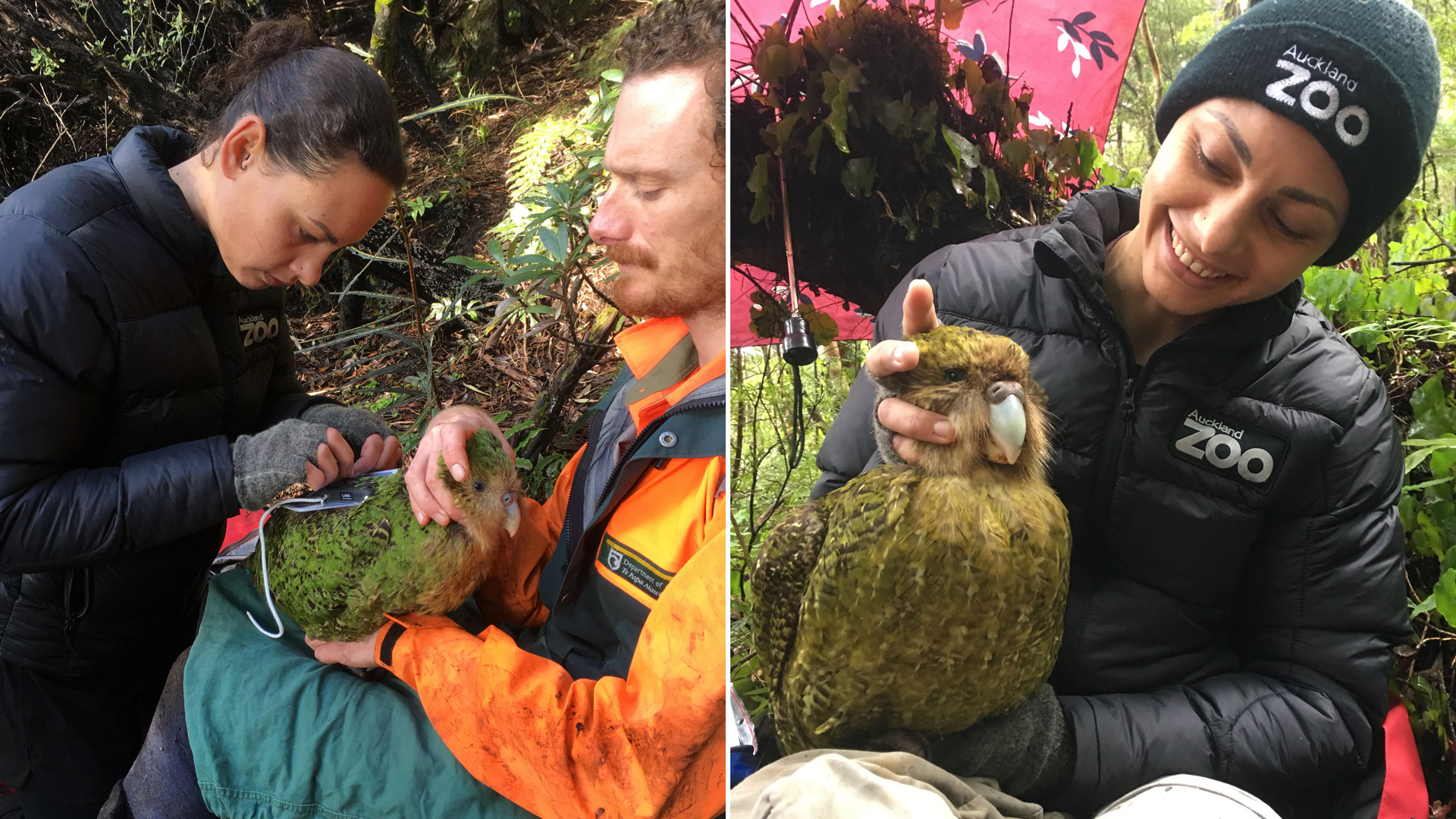 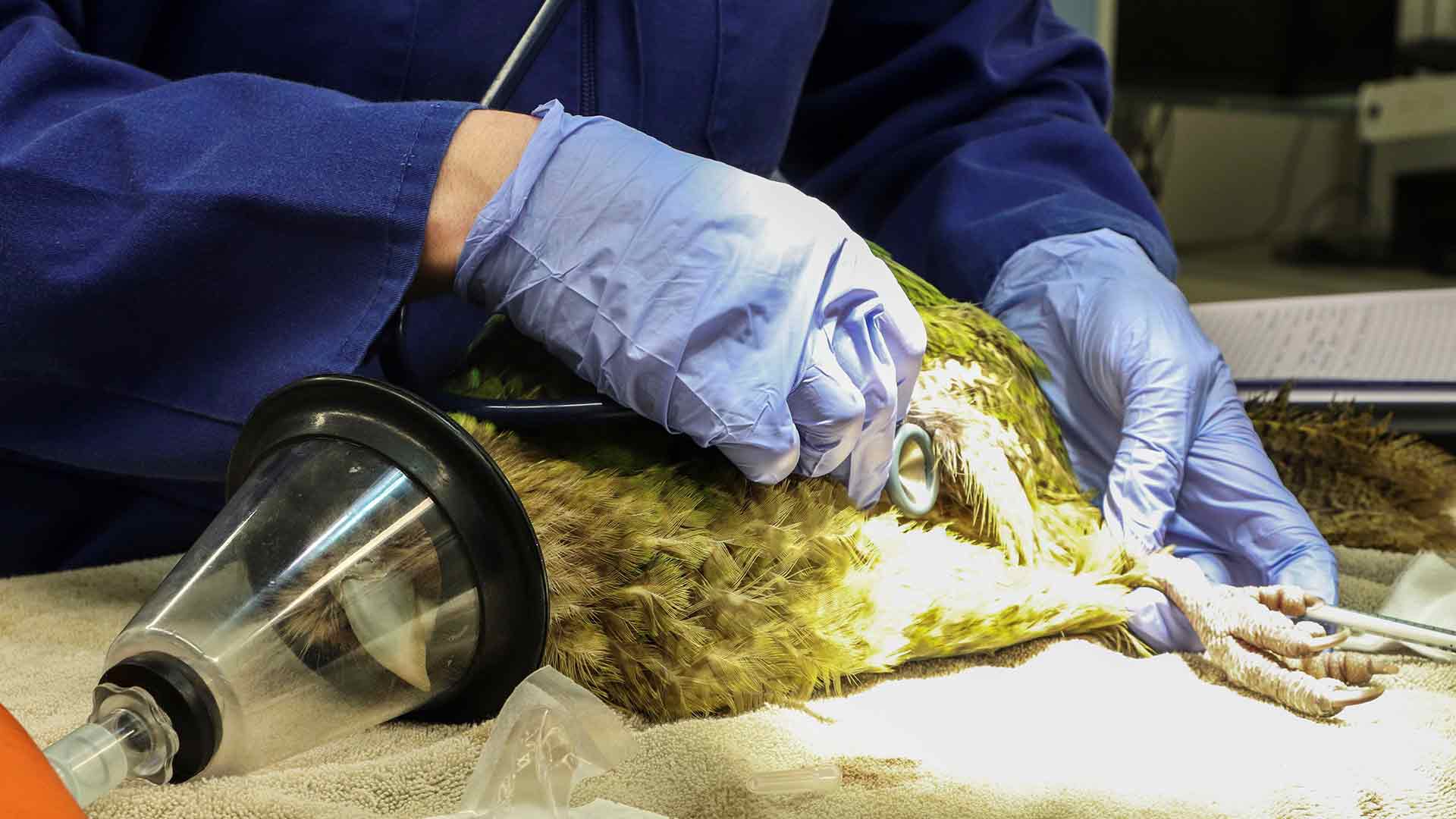 They immediately gave her food, administered pain relief and subcutaneous fluids and cared for her until she could be flown up to our New Zealand Centre for Conservation Medicine (NZCCM) vet hospital the next day.

“This is the first time Bella Rose has had cloacitis, and is one of the most severe cases we have seen in our 10+ years of treating this condition. When she first arrived, she weighed just 1.1kg,” says Dr James Chatterton, Auckland Zoo’s head of veterinary services.

“Our first priority was to rehydrate her and to provide pain relief and supplementary nutrition, which we do by giving her a nutrition-packed smoothie fed via a tube. The following day we sedated her so that we could clean up her lesion, to take a blood sample and several other diagnostic samples, and we also started oral and topical antibiotics.  Once stabilised, we performed a more in-depth investigation under general anaesthesia including radiographs (“X-rays”) and cloacal endoscopy – which is putting a tiny camera insider her cloaca to visualise the parts of the cloaca we cannot see from the outside. Over the last seven weeks, we have provided Bella with twice daily medications, food and nursing care and regular medical checks, including taking repeat blood samples, to ensure Bella is making positive progress and that no new problems occur.”

James says severe cloacitis is never a quick fix and tends to take several months to recover from. “With such a severe case, we knew Bella Rose would take a long time to heal fully and she is making great progress so far.

“It’s so heartening to see Bella Rose having come from such a critical condition in late June to being well on her way back to full health. “Combined with the intensive treatments and 24/7 care we’ve been able to give her, it’s her incredibly calm and stoic nature and her love of food that’s also contributing greatly to her recovery from this disease.”

James explains most wild birds don’t like being hospitalised, and when they are, some never eat by themselves. Not the case with Bella Rose – a real foodie, who Kākāpō Recovery’s Technical Advisor, Daryl Eason tells us, was so fond of supplementary foods like high-fat nuts when living on Hauturu (Little Barrier) Island many years ago, that she remained one of their fattest females and got to a whopping 2.43kg – very heavy for a female kākāpō, “and may have been the reason she didn’t breed on Hauturu”.

When it comes to kākāpō cuisine, Auckland Zoo’s vet hospital, with its years of experience with long-stay kākāpō patients, is Michelin star quality! Along with her twice-daily medications and supplementary tube feeds, on the menu for Bella Rose is fresh pohutakawa bark (a big favourite), nikau berries, kawaka, pine needles, pine bark and seed pods and bottle brush – expertly sourced and delivered courtesy of our amazing Horticulture team. The veterinary team says she also loves apple (though will turn her beak up at any pieces less than super fresh!) and is also given sunflower seeds and macadamia nuts as treats.

DOC’s Daryl Eason has plenty of first-hand experience of Bella Rose’s stoic nature and that of many other kākāpō individuals’ determination to pull through tough times.

“Unbeknown to us, Bella Rose broke a leg in the first half of 2019, possibly during the nesting period, but this remained undetected and she continued to incubate eggs and raise chicks whilst her leg was healing. There was no evidence from her nesting behaviour that she had such an injury, which we discovered in June 2019 when she was getting a CT scan at Massey University Wildbase (wildlife hospital) in Palmerston North. It just highlights the stoic nature of kākāpō and their ability to cope in the wild,” says Daryl.

When it comes to Aotearoa’s kākāpo, every single individual counts. As vets and vet nurses, it’s such a privilege for us to be helping an individual like Bella Rose in a way that can directly help her and also the survival of her species.

Bella Rose now weighs a healthy 1.75kg - a more normal winter-weight for her when she is on Whenua Hou. Once her cloacitis has fully healed, she’ll stay an extra few days at the vet hospital, so the vet team can ensure the disease doesn’t recur as soon as the medications are stopped. All going well, she’ll then head home to Whenua Hou with a clean bill of health.

“When it comes to Aotearoa’s kākāpo, every single individual counts. As vets and vet nurses, it’s such a privilege for us to be helping an individual like Bella Rose in a way that can directly help her and also the survival of her species. She’s one of only 209 of these incredibly unique birds in the world, and if we can get her back to full health and home to Whenua Hou, and she gets to breed again, that’s helping the future of kākāpō,” says James.

Auckland Zoo’s veterinary team, DOC vets and scientists and many other experts are involved in a number of research projects working to find out exactly what causes cloacitis, which includes examining multiple possible causes such as infectious diseases, bird genetics, and environmental factors.  This disease first presented almost 20 years ago and can affect all ages of adults.  It has not followed a clear pattern as to which birds it affects on Whenua Hou, with some individuals suffering disease just once and then never again, while others can get recurring bouts, though these birds are often still able to breed and successfully raise chicks. Everyone is hoping Bella Rose is in the ‘once-only’ category!

Helping Bella Rose’s daughter and other kākāpō on Pukenui

While our vets and vet nurses continue their hard mahi to get kākāpō Bella Rose back to the wild, Auckland Zoo bird keeper Jasmine Rabaud is hiking the hills and valleys of pest-free Pukenui (Anchor) Island in Dusky Sound, Fiordland.

Every year, Auckland Zoo staff spend many thousands of hours doing Wild Work throughout Aotearoa, helping some of our most threatened toanga species. Jasmine in here on this very hilly 11km2 isle assisting Kakapo Recovery rangers with transmitter changes and health checks of some of the island’s 79 kākāpō – including Bella Rose’s young daughter Verity. Verity is the only surviving offspring of Bella Rose’s three chicks from last breeding season; sadly two of these chicks died from the fungal disease, aspergillosis.

“Last year I was helping hand-rear chicks on Whenua Hou, and four of those chicks, including Verity, are now growing juveniles here on Pukenui, so it’s really special to be able to see them, and Verity again. “We use telemetry equipment to track the birds down, and as well as changing their transmitters, give them a thorough ‘beak to tail’ physical examination. With some individuals, this also involves collecting samples, including feathers (to test for PBFD - psittacine beak and feather disease), taking swabs (for chlamydia testing) and also faecal samples,” says Jasmine.

To say Jasmine enjoys her work is an understatement!

“I absolutely love this work. Besides being able to work in some of the most remote and stunningly scenic areas of New Zealand, I get to be part of the very core of conservation work. My dream and passion in life has always been to be able to help towards the conservation of species and to be so intimately involved in this particular project has made that dream come true.

“It’s essentially the very essence of why I do what I do for a career. And working closely with DOC’s Kakapo Recovery team, who are so passionate and like-minded, is an absolute pleasure and inspiration. It is so essential that we work closely with other organisations like DOC in order to achieve our shared goal of building a future for wildlife,” says Jasmine.

This Conservation Week (15 – 23 August) we’re sharing stories of Auckland Zoo’s Wild Work and the local and international conservation projects you help to support. Download our fun at-home game and follow our social media channels to learn more. You can also make a donation to help support this vital Wild Work.

We have a new VIP patient at the Auckland Zoo Vet Hospital!