Kuihi-2-A and Hinemoa-3-A will be accompanying kākāpō Joe, who made a brief trip back to our Vet Hospital for a cautionary health-check, on an Air New Zealand flight to their wild island home of Whenua Hou. 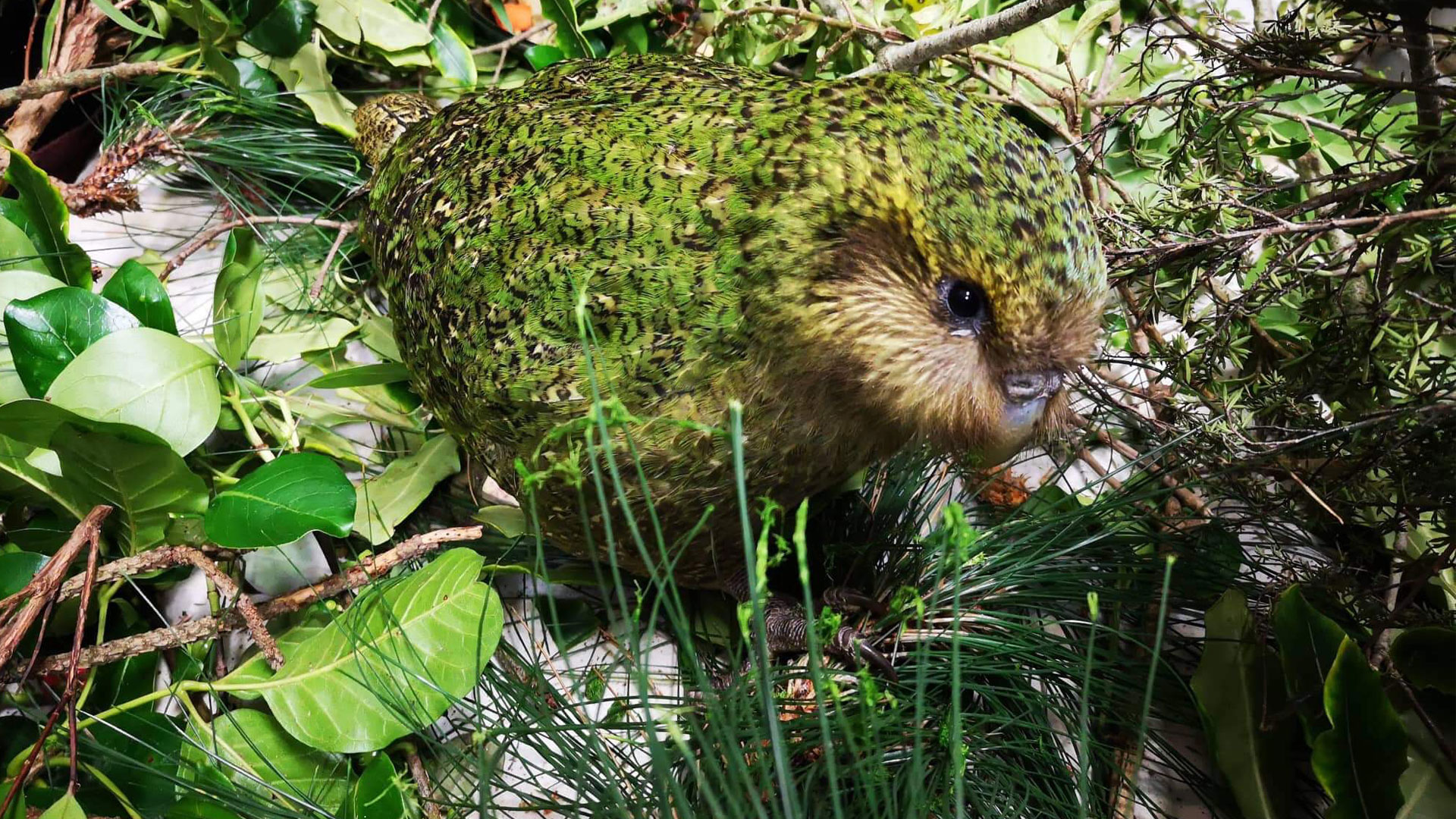 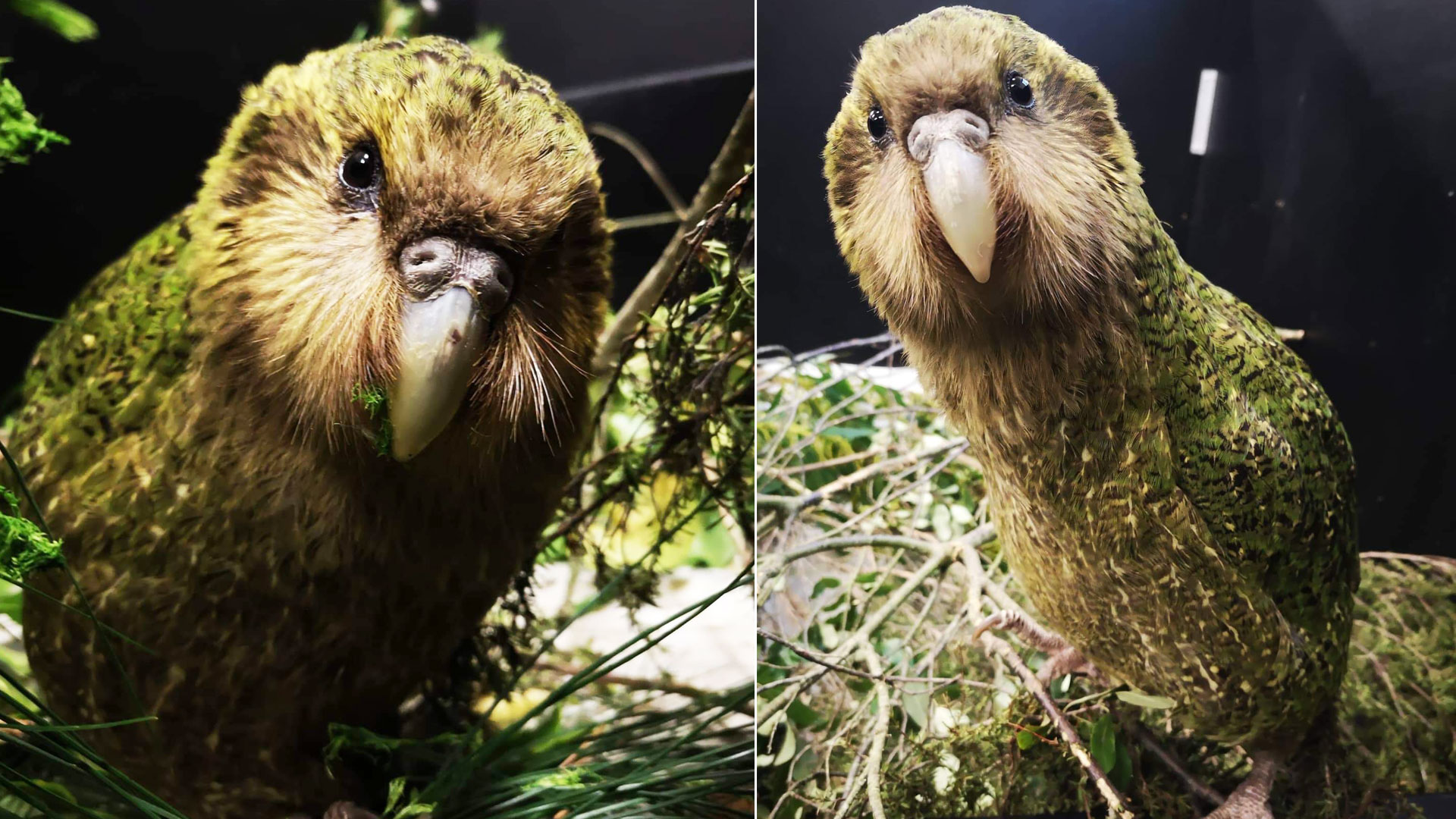 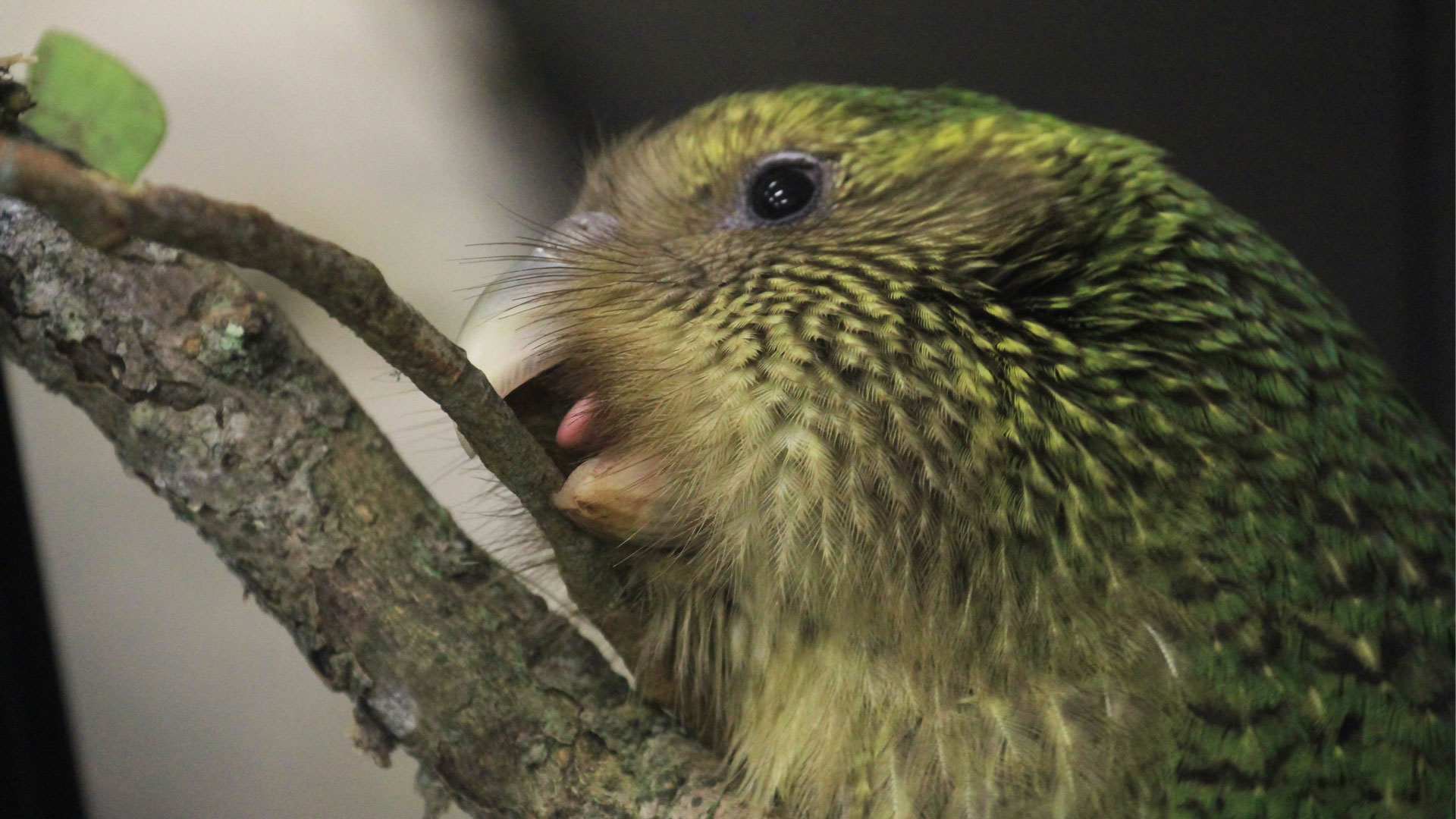 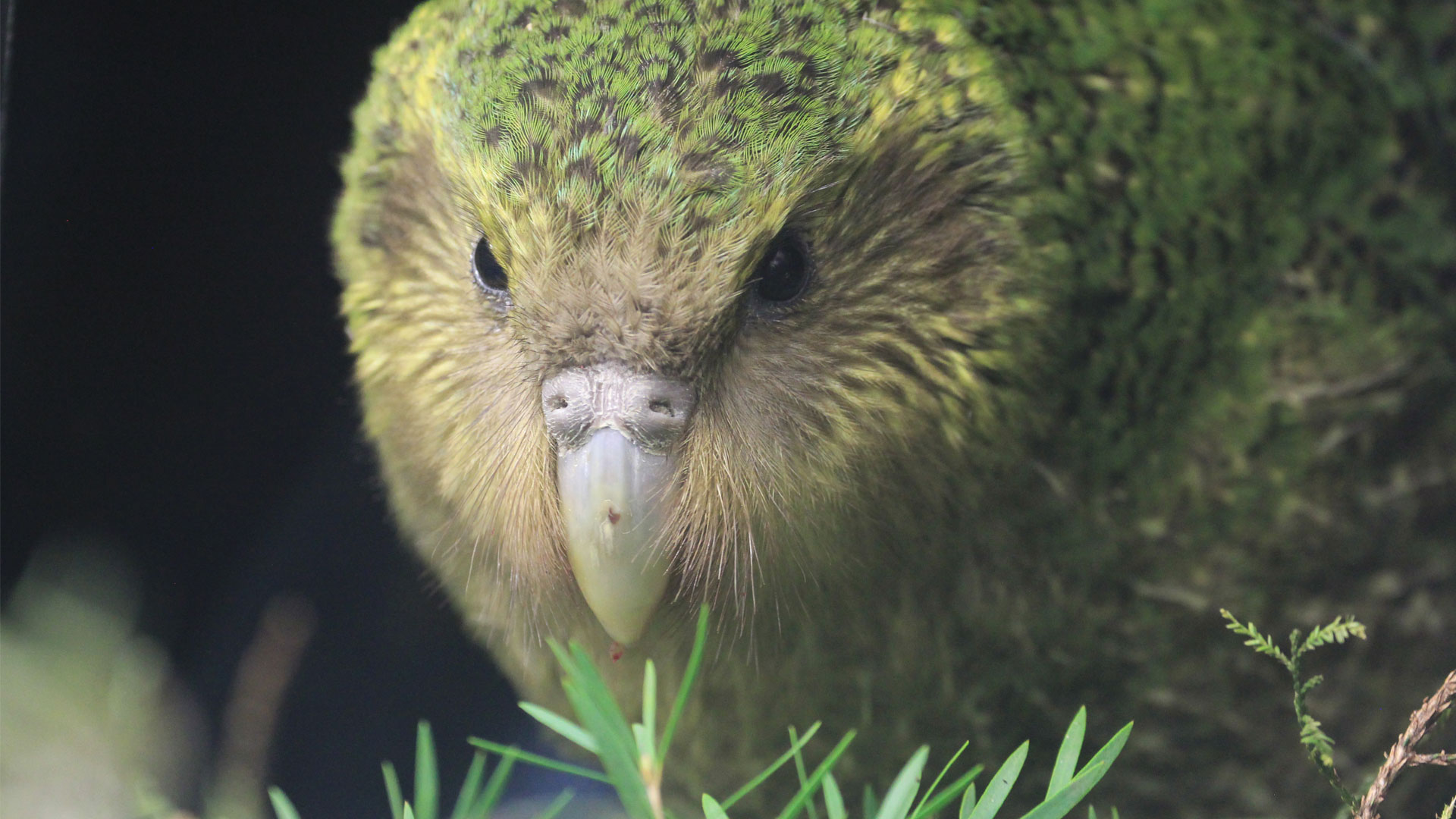 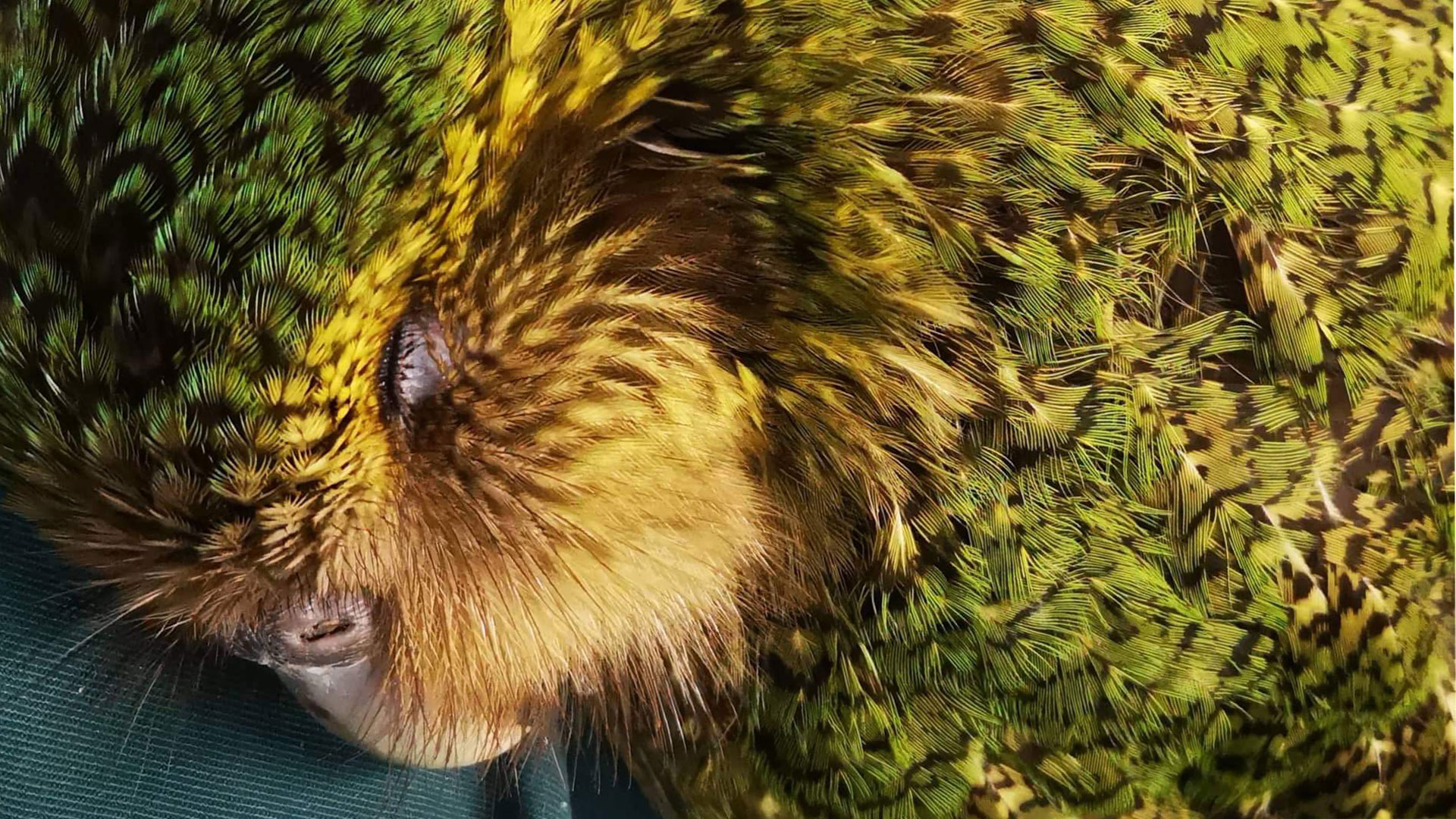 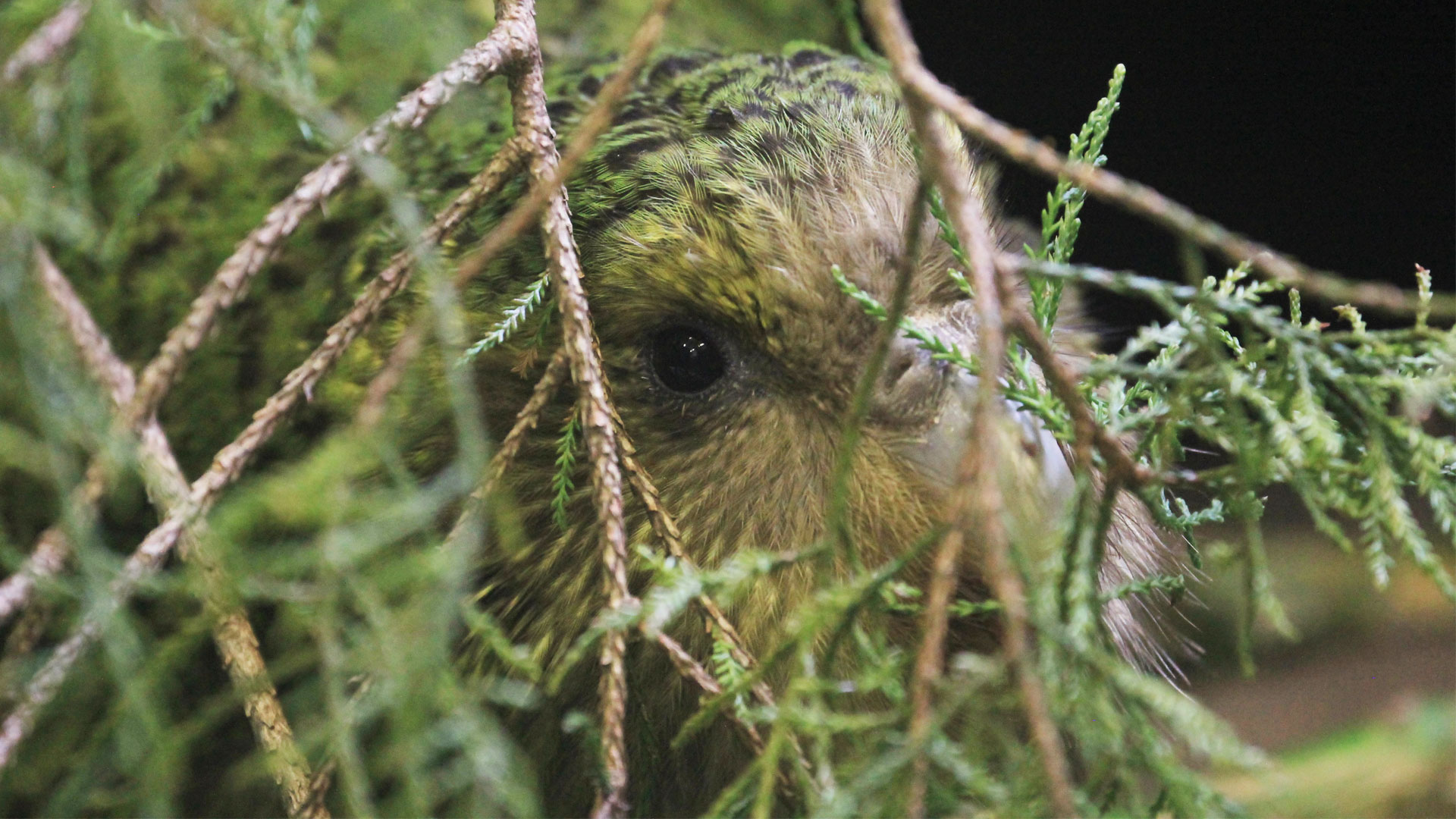 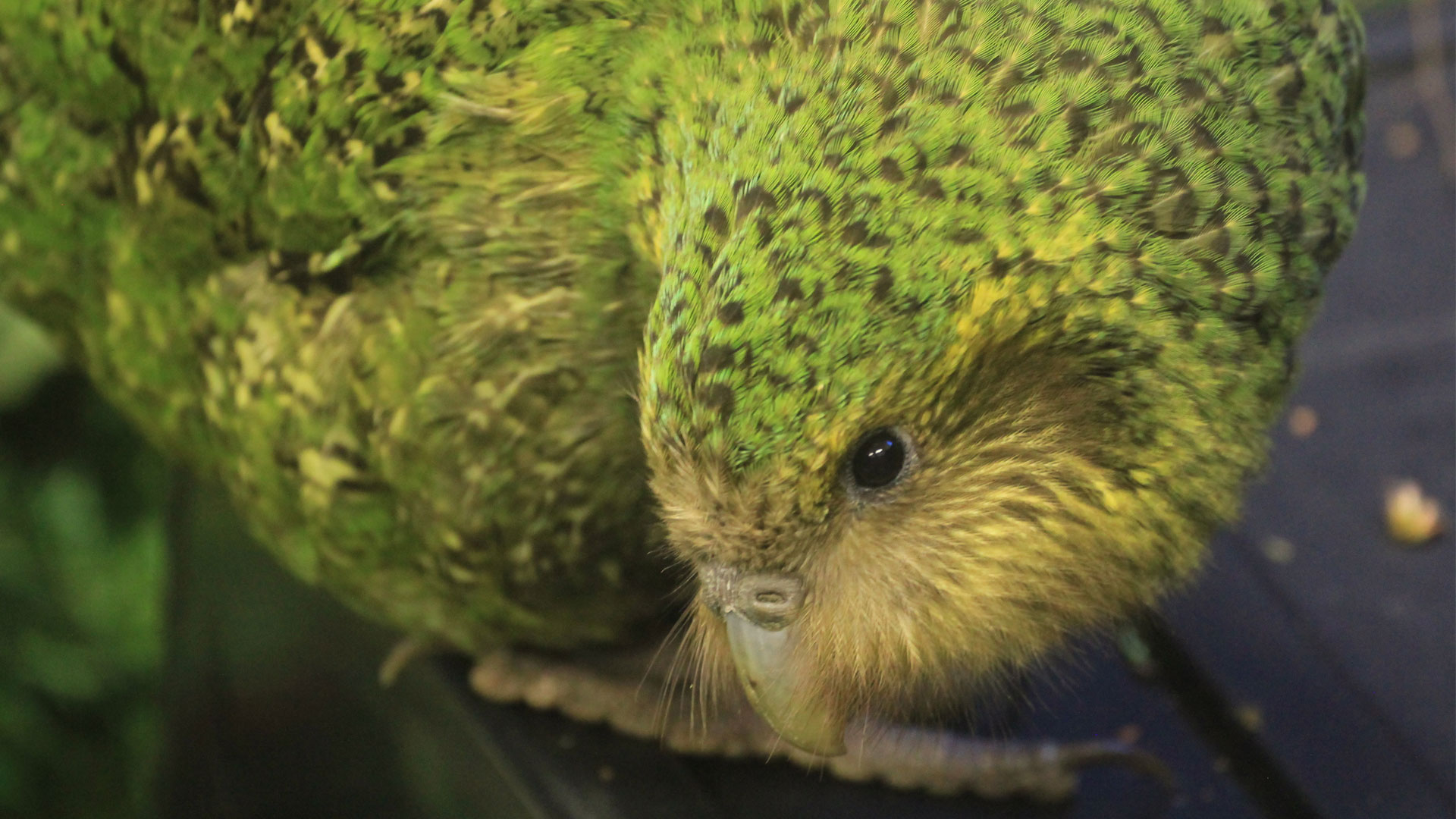 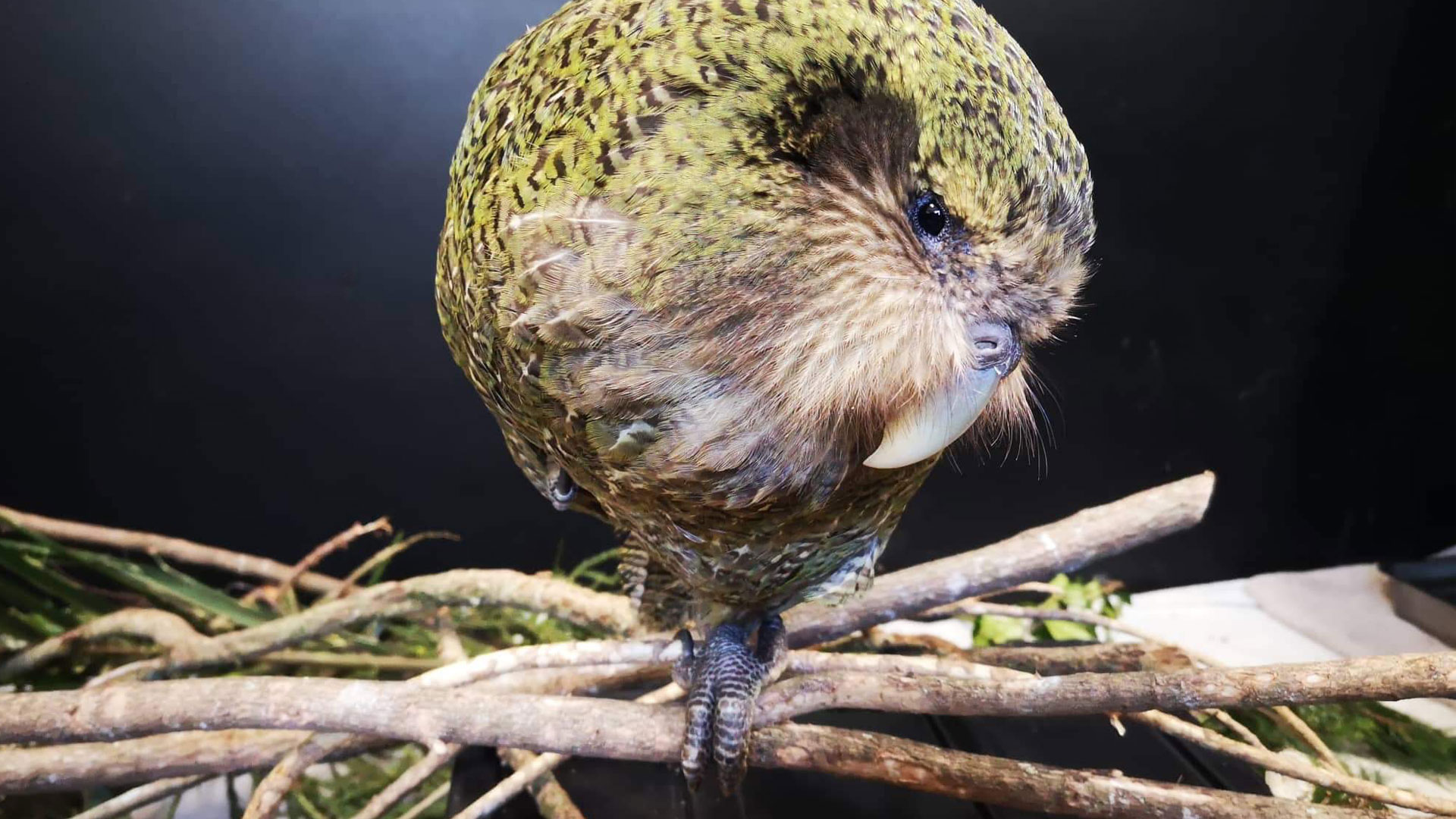 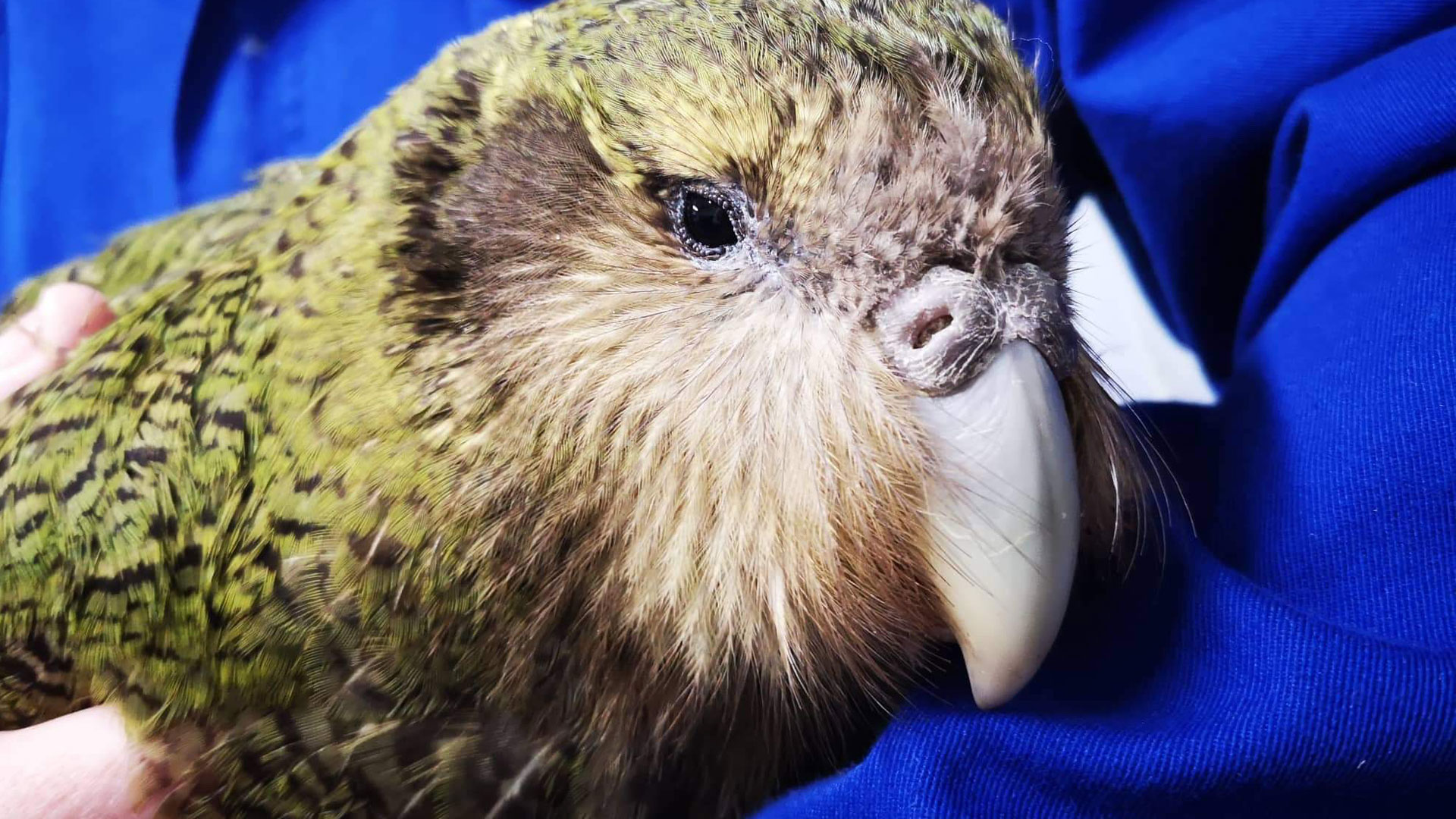 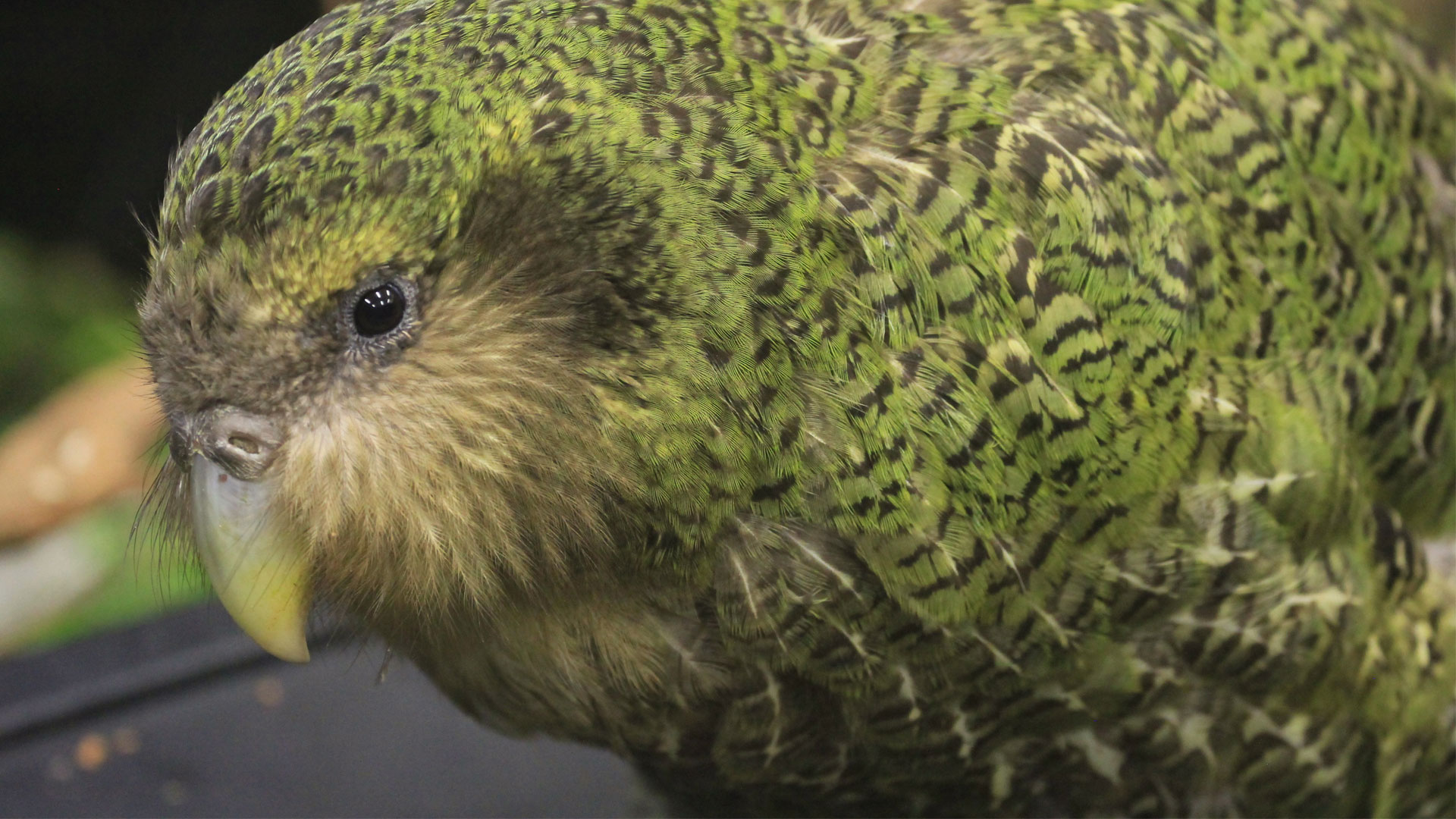 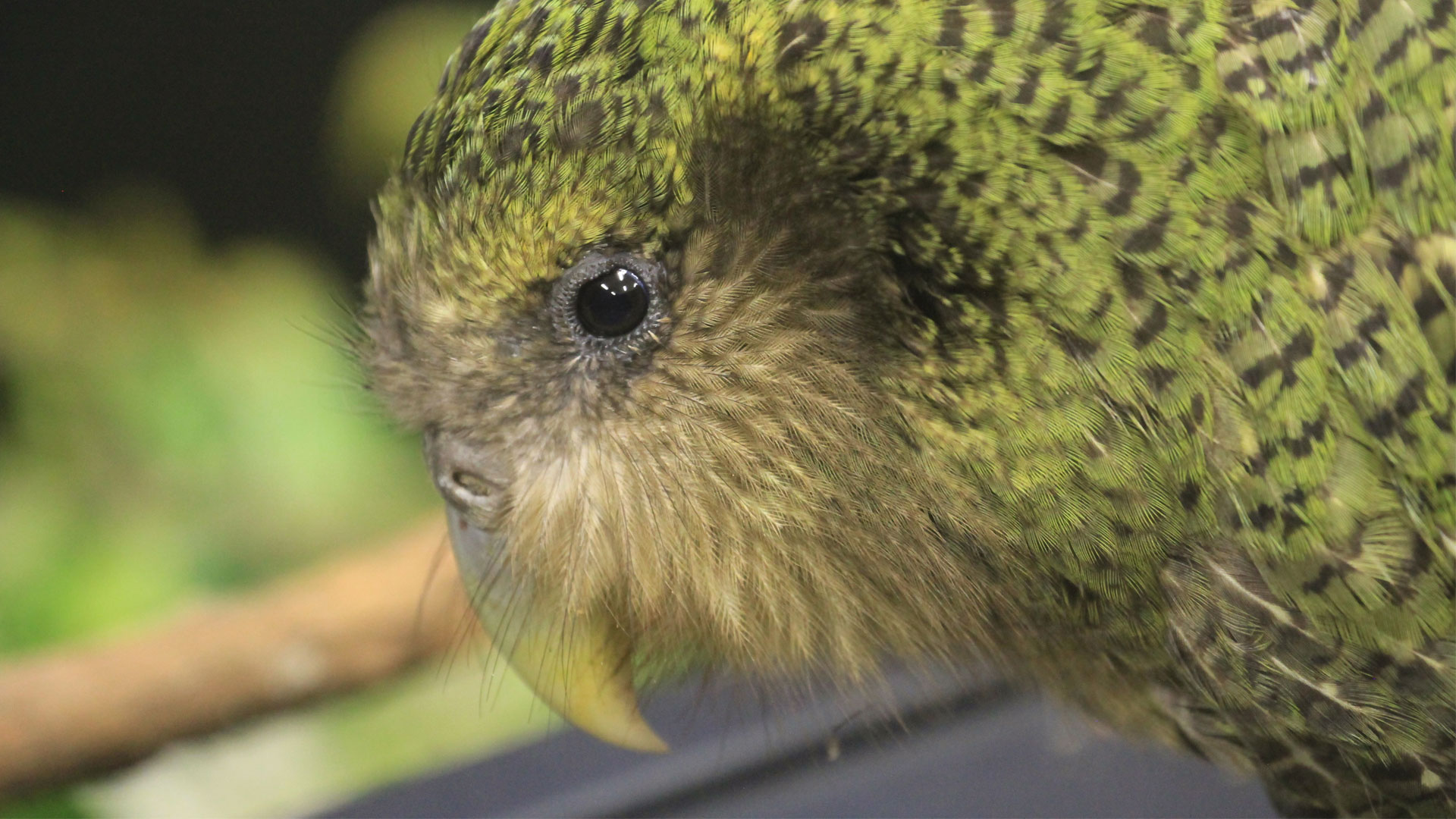 Our resident vet Lydia describes Kuihi-2-A as “A very sweet chick who appears to be very tolerant of all the treatments and tests she has had to undergo. She has been a firm favourite for some of the care team and she has matured into a beautiful bird since she arrived in our care 100 days ago”. Lydia was on Whenua Hou island earlier this year as we helped the new mums, and our partners at the Department of Conservation, manage the unprecedented influx of rare baby birds that hatched this breeding season. She was there when Kuihi-2-A was returned to the island as a 24 day-old chick and was placed in the nest of foster-mum Pounamu, so you can see how connected our team are to the lives of these precious birds. Kuihi-2-A’s original CT (x-ray) scan back in May showed signs of respiratory disease, so it’s a tremendous feat that she has now been returned to full health.

Kuihi-2-A’s travelling companion, Hinemoa-3-A, is the only male chick currently being treated for respiratory issues at our on-site Vet Hospital. He hatched on Anchor Island but was later moved to Whenua Hou to be looked after by foster-mum Alice. Rangers noted that he sounded very wheezy, so he was brought to Auckland Zoo for a full veterinary assessment. His first CT scan showed signs of a granuloma which is an area of inflammation typically produced in response to infection. Subsequent scans have seen this granuloma decrease in size with treatment and now, he’s been cleared of all disease.

Kākāpō Recovery have recently announced that 58 of the 72 chicks that hatched and survived this season have reached 150 days of age and have therefore been officially added to the adult kākāpō count!

Kākāpō Recovery have recently announced that 58 of the 72 chicks that hatched and survived this season have reached 150 days of age and have therefore been officially added to the adult kākāpō count. Prior to this population boost there were only 142 adult kākāpō left in the entire world – but now thanks to the work of our incredible partners, our vet colleagues Dunedin Wildlife Hospital and Massey University’s Wildbase Recovery, and the hard mahi of our bird keepers and vet team, there are an astonishing 200 kākāpō, with more chicks still to be added to the grand total!

This is an absolute WIN for conservation efforts, and shows the amazing dedication and expertise that has gone in to saving this precious Aotearoa species – ka pai to everyone involved.

With these three kākāpō heading home, it brings our total count of 10 kākāpō in-patients down to 7 (2 adults and 5 chicks) and we will keep you posted on their progress in the coming weeks.

Building a future for Kākāpō

It's set to be a bumper breeding year for kākāpō!