There’s a real science to selecting the enormous variety and quantity of foods that Auckland Zoo’s 1400+ animals (from 135 different species) require to suit their specific biology and ensure their very best health. This is the job of our animal experts, our veterinary staff and keepers.

However, it’s our amazing Stores Coordinator, Ian Pownall, who has the huge, exacting task of ordering most foods and other required products, making up ‘My food bag’ packs (the animal versions!) and carrying out daily deliveries to ensure our animal whanau gets fed. 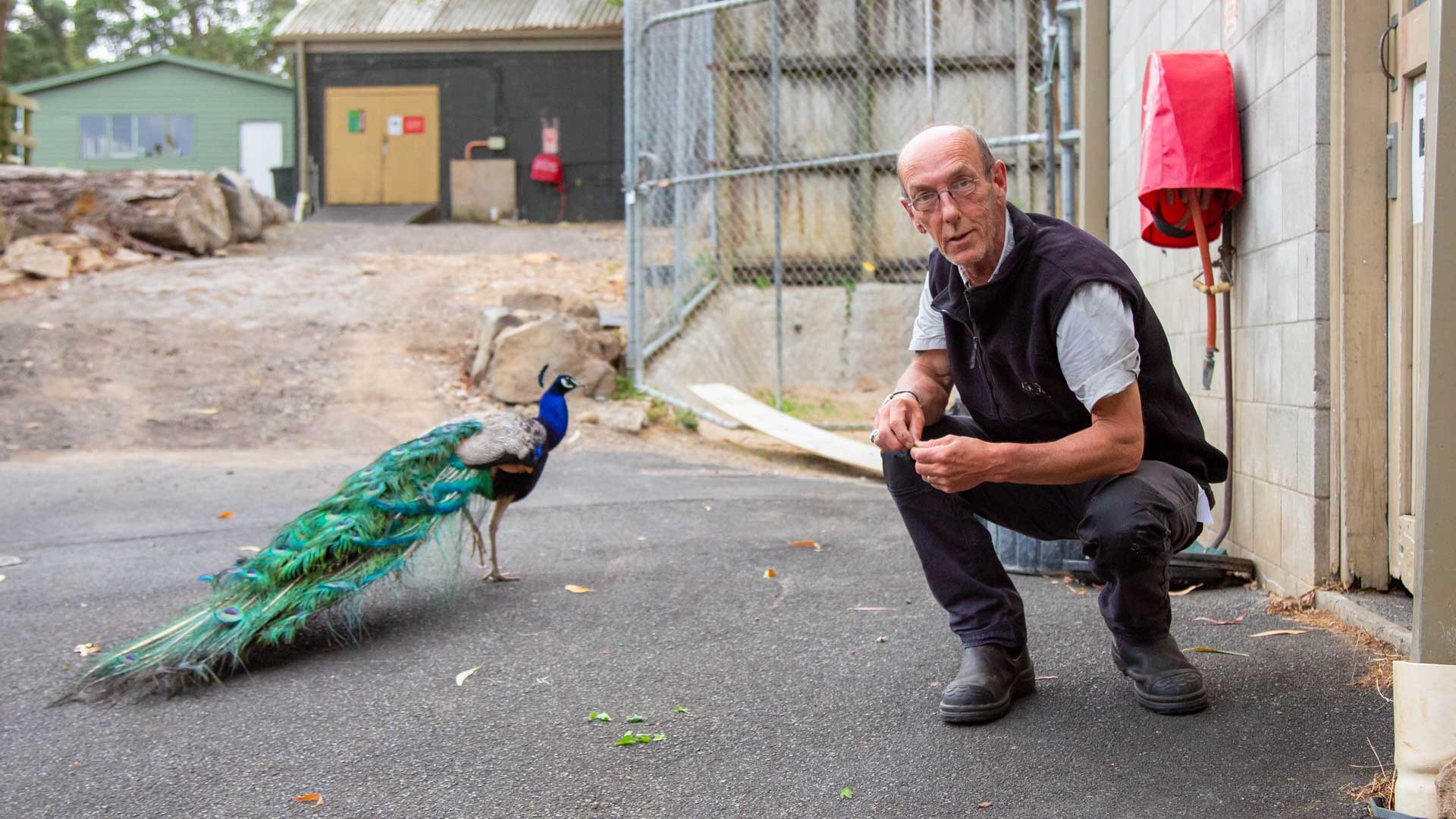 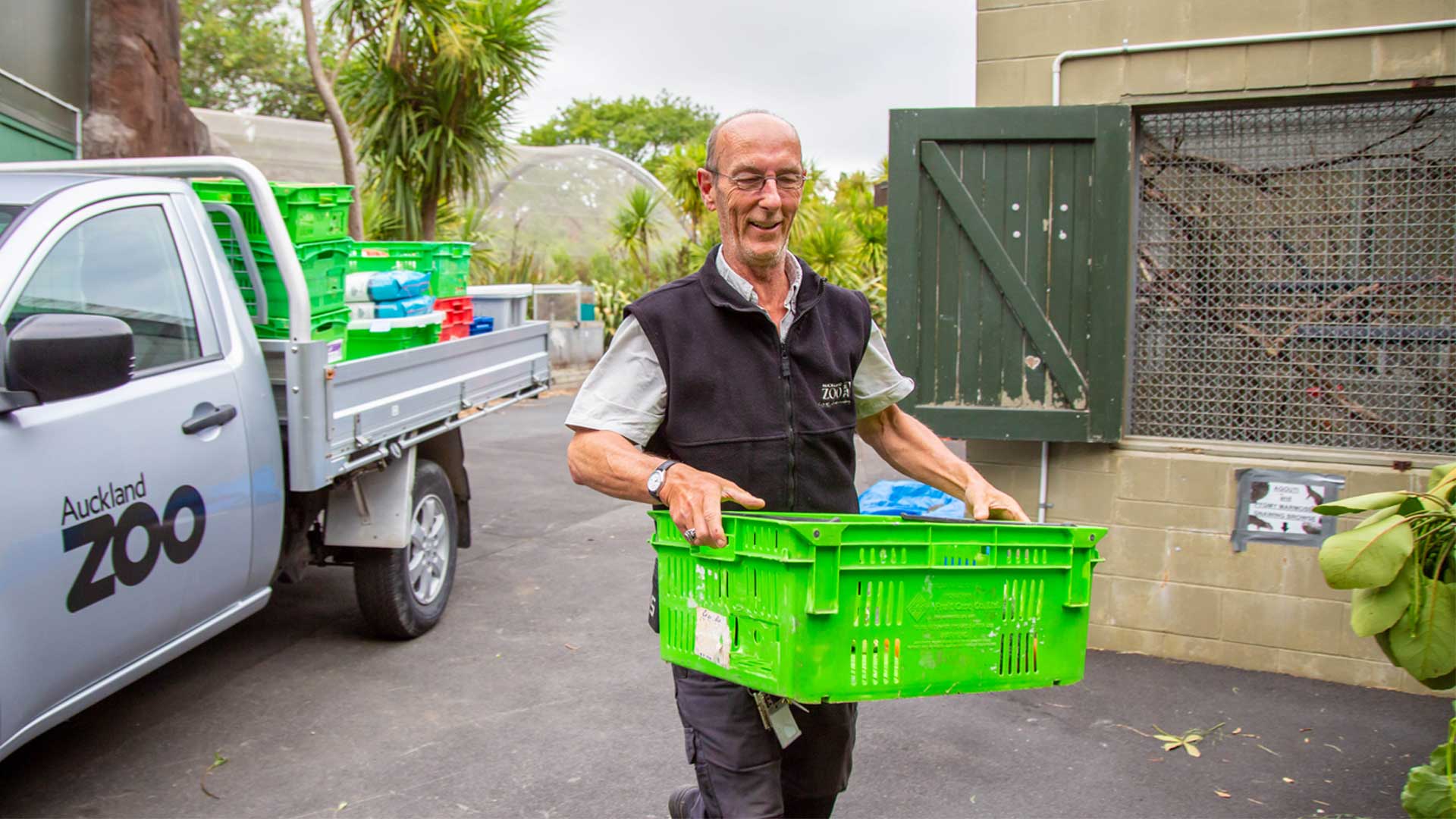 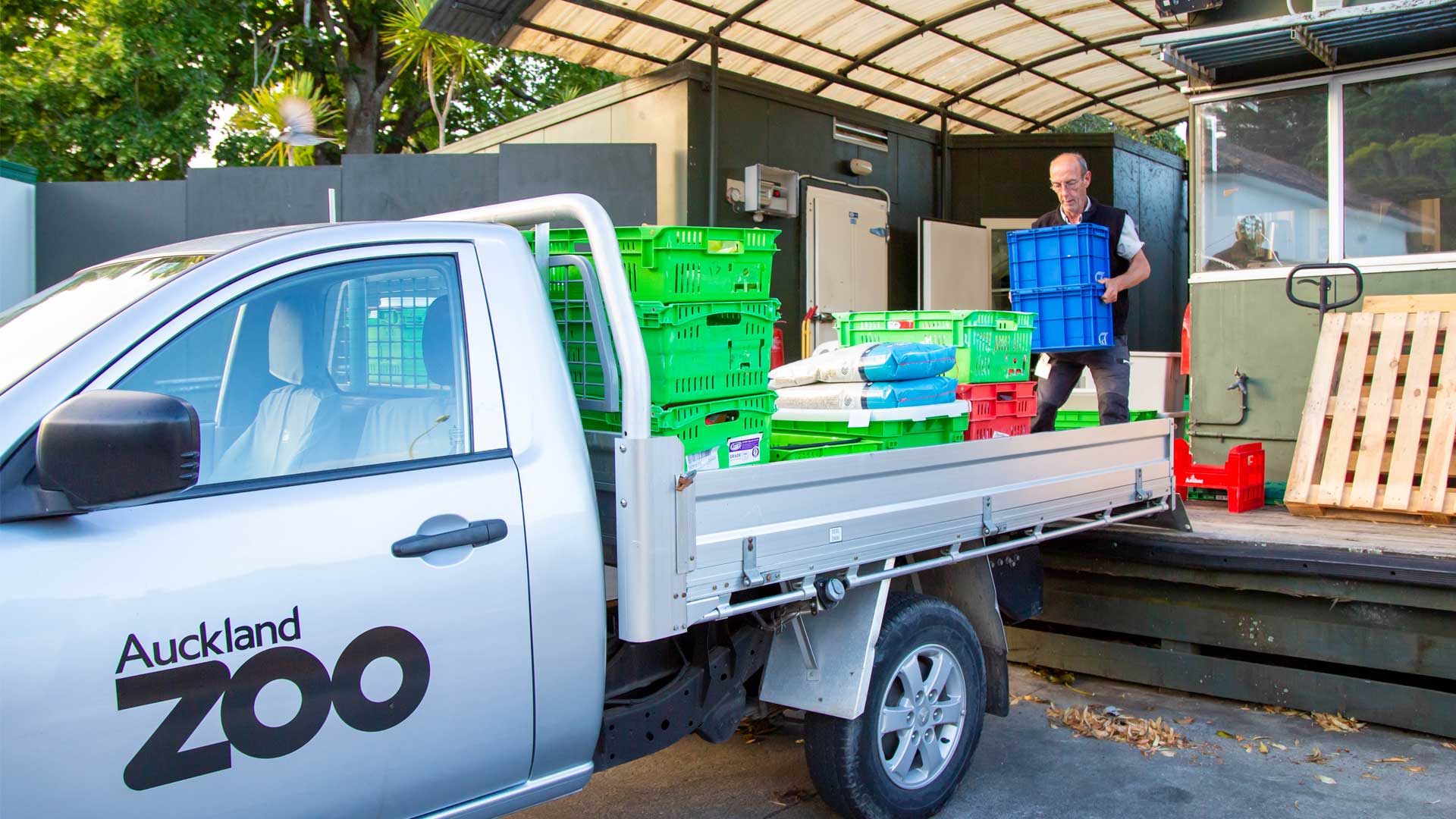 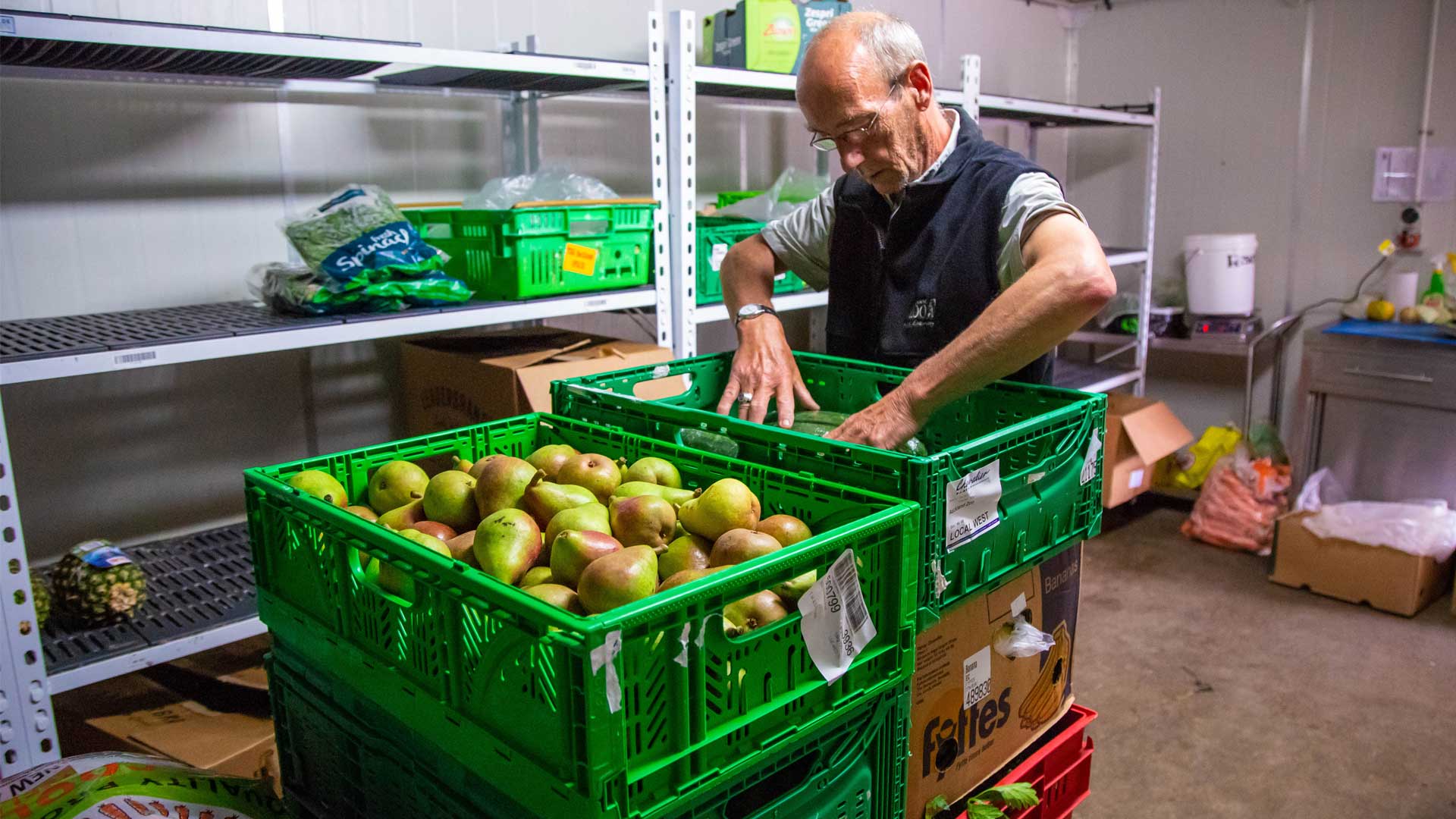 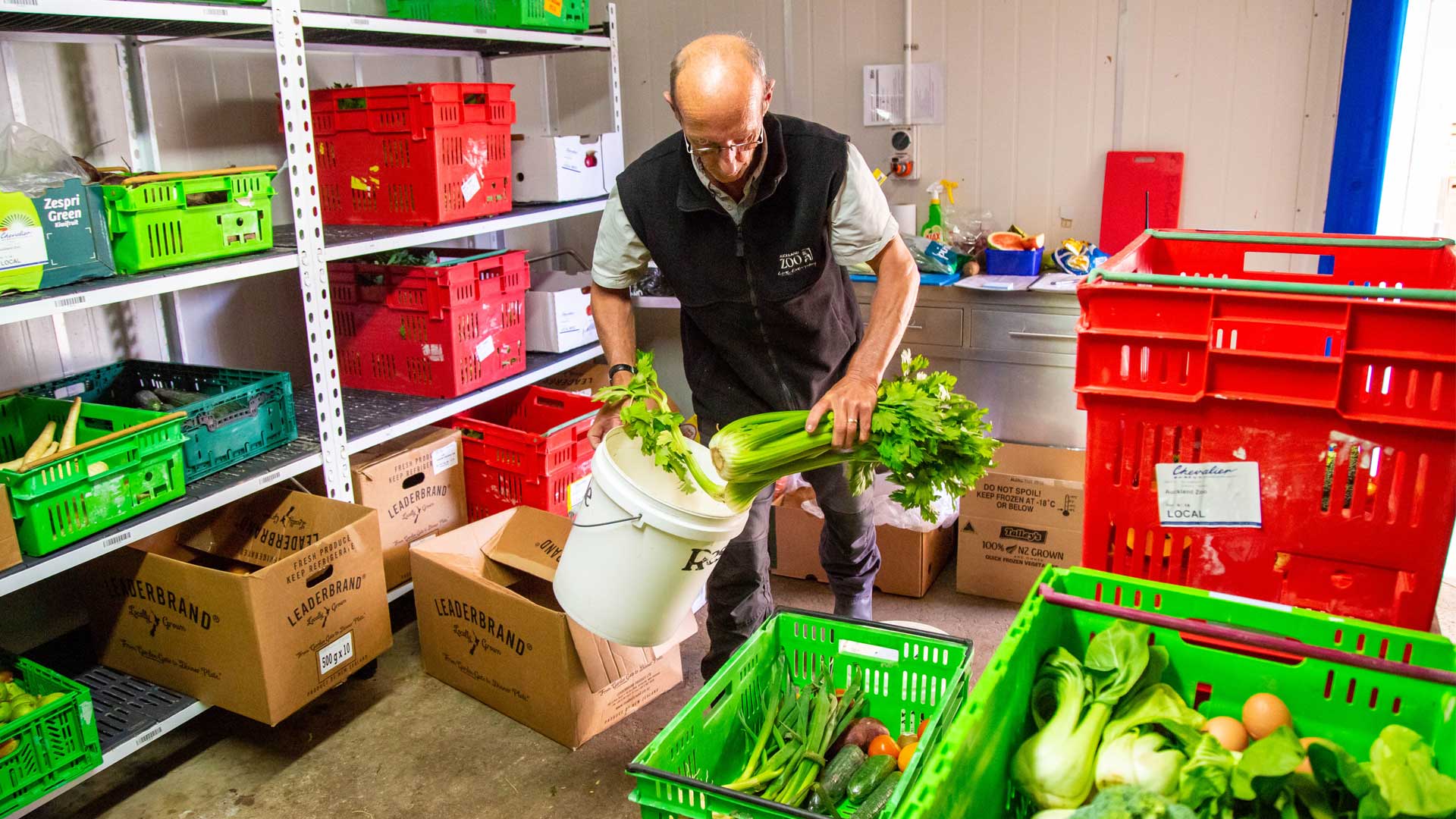 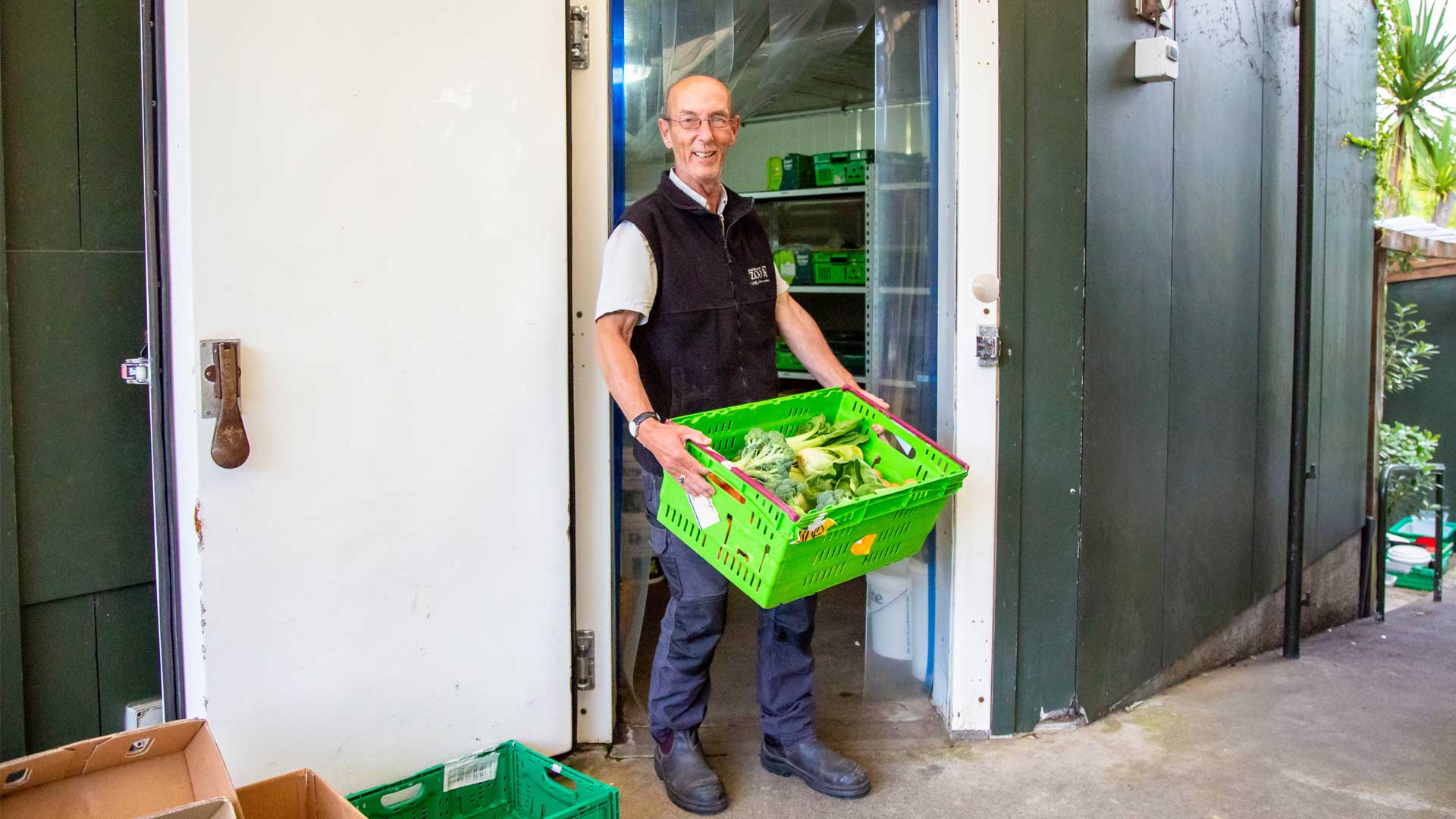 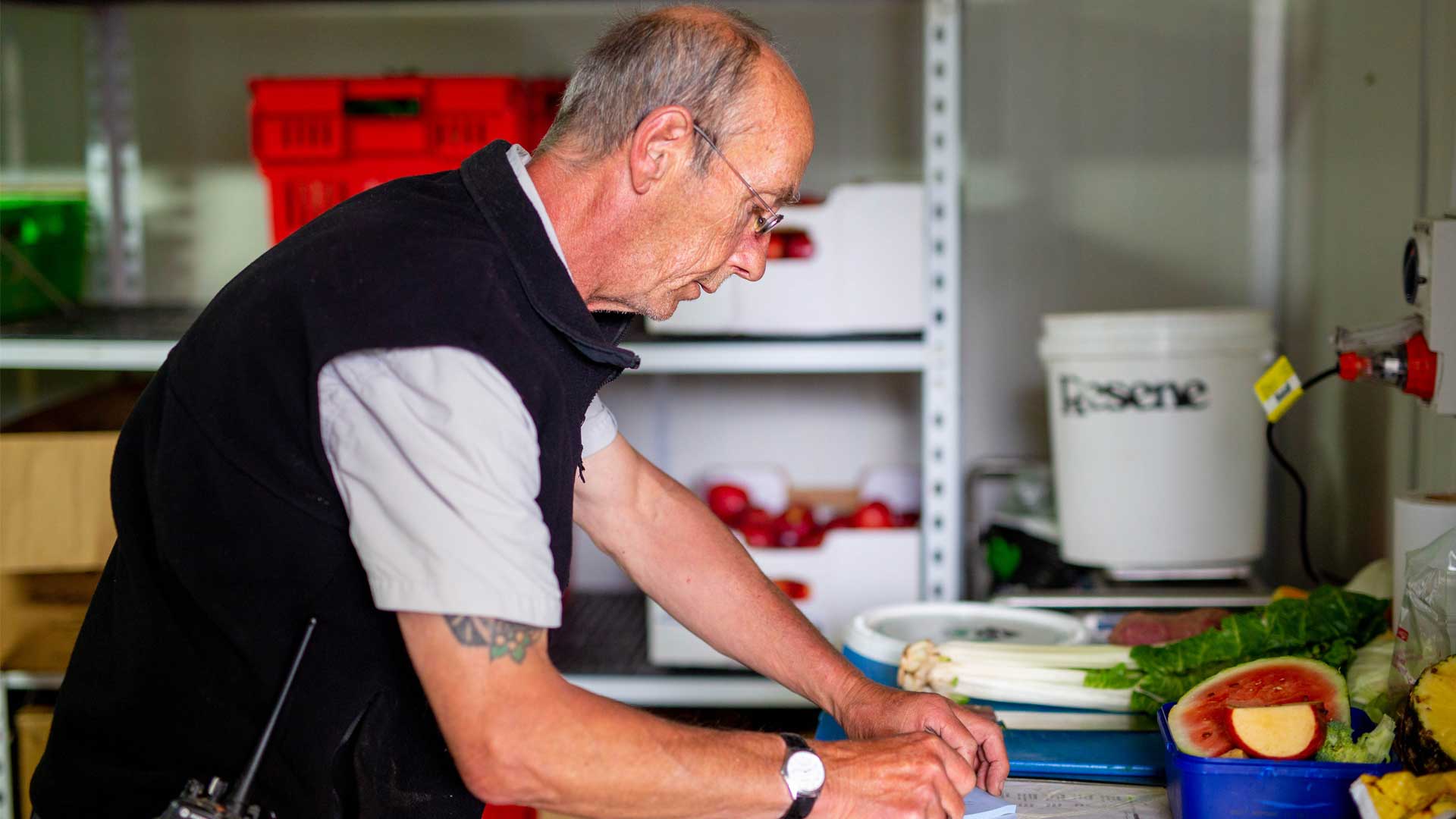 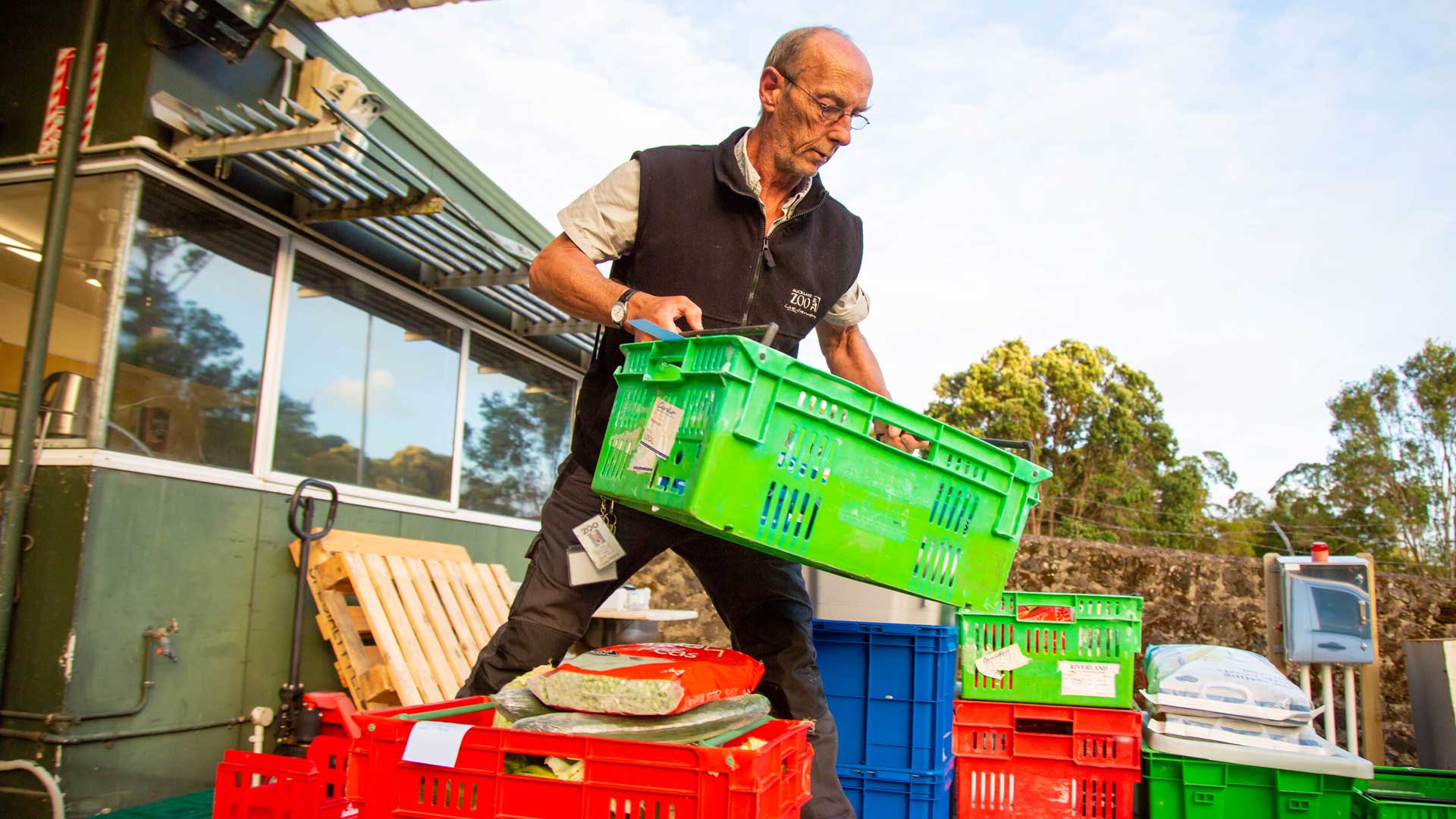 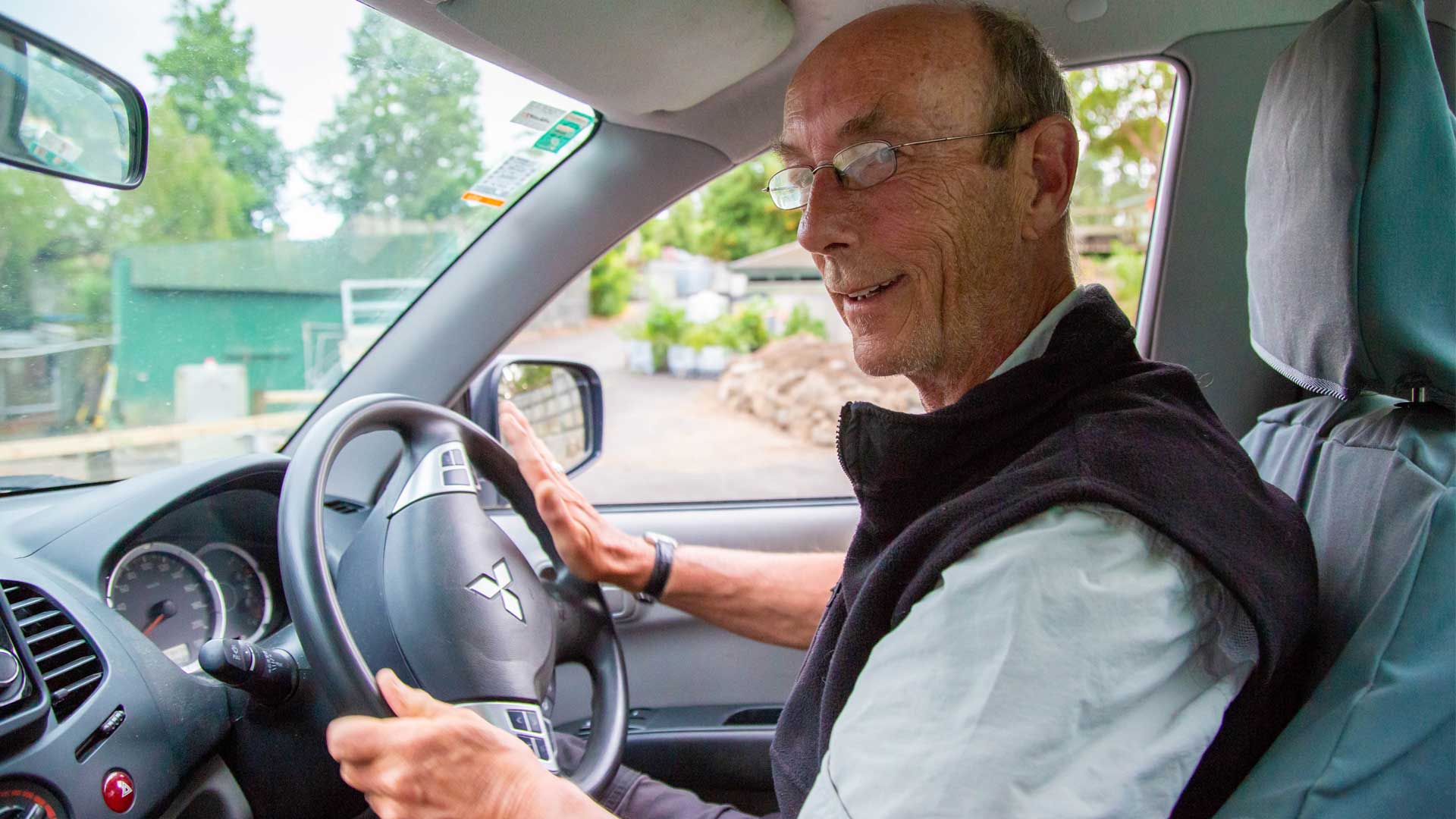 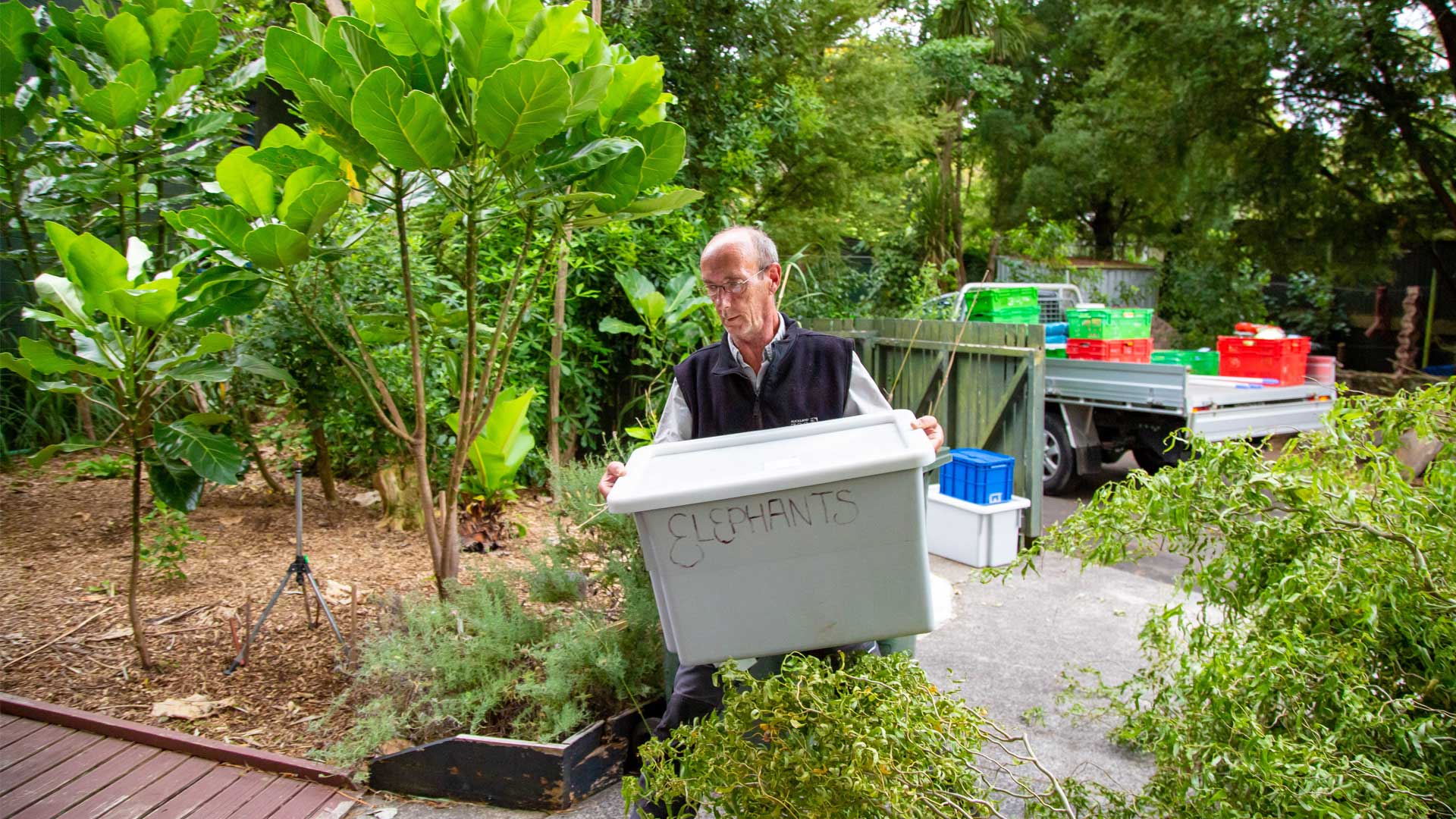 “Each day is different. On a daily basis, I’d make up 17 various diets consisting of 26 varieties of fruit, 35 varieties of vegetables and up to a dozen types of meat. Weekly, our elephants chomp through 168kg of fruit and veges. I can tell you one of our spider monkey’s requirements includes 600 grams of Chinese cabbage a week, our porcupines, 400g of kale, along with yams. The Carnivore section gets a special marinara (fish) mix for otters, and the Ectotherm section’s iguana is the only Zoo animal that requires watercress,” says Ian.

The early riser, who has just celebrated his 11th year at the Zoo, starts work at 5.15am (he says being ex-army helps!). By 7am, Ian has sorted all the diets that need to be delivered for the day comprising dry, fresh and frozen products, and loaded them up on his truck. Deliveries around our 16ha grounds are completed by 8am, and he’s back at Stores to make up the following days’ diets, which for practical reasons are prepared two days in advance.

“Every single food item has to be weighed to ensure it’s the right amount. It’s time-consuming but, what first took me four hours, I can now easily do in two. The rest of my day is ordering, answering emails, meetings and dealing with deliveries.  For all sorts of reasons, animal diets can change at any time, so I’m in contact with the keepers a lot.”

As a zoo, sourcing sustainable products is really important - be that Fairtrade bananas, free-range eggs, or products that do not use unsustainable palm oil, and as much as we can, like to source local.

Ian describes his office as an “open-all-hours Zoopermarket”. It includes a cool store, dry goods store (for spices, herbal teas, pellets, nuts, seeds, cleaning products, even pregnancy test kits keepers require for primates), a walk-in freezer, office for desk work, and a loading bay. It’s here on a Wednesday around midday when live insect deliveries (crickets, locusts and beetle larvae for our insect-eating animals) come in, that he’ll often find his favourite Zoo animal, Harold, our free-ranging peacock, has come to visit.

“Harold just seems to know when the insects arrive. Once unloaded, you can usually hear them fluttering inside the boxes. More than once I’ve caught Harold unsuccessfully trying to peck through a box,” says Ian, whose office is also used by Harold on hot days for a “wee rest”.

Journey to the Zoo

Born in England, Ian grew up in Doncaster and spent 16 years in the army. His time in the famous regiment, the Coldsteam Guards, saw him serve in Germany, Northern Ireland, Gambia, Canada, Hong Kong, and even the Falklands Islands.

As a Coldstream Guard there were also Royal duties at the Tower of London, St James Palace, and Buckingham Palace, where on 29 July 1981, the royal wedding of Prince Charles and Lady Diana, he spent four hours moving 10 paces to his left and right!

Why Auckland Zoo? After marrying a Kiwi, moving to New Zealand and working for 15 years at Auckland Airport in a security role that required a lot of shift work, Ian decided it was time for a change.

“One day I spotted an advert in the paper for a store person at Auckland Zoo. It wasn’t so much about it being at a zoo, it was the lack of shift work that really attracted me.  Eleven years on, and the rest, as they say, is history,” says Ian.

“What I love about this job is that because I’m making up different animal diets each day, no one day is the same. I get to build relationships with suppliers which really helps, and the keepers are very good. Plus, I never know what someone will order. Some items can be tricky to track down. Some days a crystal ball would be brilliant!”

Ian says in general, deliveries are as expected, but there’s been the odd curve ball.

“I remember when elephant Kashin was still alive. I got a call asking if the Zoo would like some bruised but otherwise perfectly fine watermelons, so I said yes, we’d take a couple of crates. A short time later a truck with six massive wooden pallets containing 800 water melons turned up!”

“I called the Elephant team leader Andrew Coers, and he and his team walked Kashin and Burma over to stores. Together they took care of about one and a half pallets. We had watermelon juice running everywhere, and many more melons to get rid of. So I put the call for volunteers and maintenance to help distribute to other animals that could eat them.

“A similar situation happened a few years ago, when an A & P Show offered us some pumpkins – one of them alone was over 35kg! It’s so nice that people think of us, but now when we’re offered free stuff, I’m wary of amounts people say; we have to be able to keep food fresh and it has to be suitable.”

Ian says after 11 years at the Zoo he is still amazed at the variety of goods needed to sustain the Zoo’s animals, and as new species arrive, the Stores list continues to grow.

“Since I started the number of species we have has increased considerably, and there are now a quarter more diets to prepare.

“As a zoo, sourcing sustainable products is really important - be that Fairtrade bananas, free-range eggs, or products that do not use unsustainable palm oil, and as much as we can, like to source local. We’re also on a journey with suppliers to reduce packaging that comes in.  Plus, we’re working on a new cloud-based online shopping inventory system called WASP that, once in place, will make ordering for all so much easier.”

Meet our jack of all trades - Kona Ikinofo!