Just look at these hungry mouths! Our bird team has been extra busy lately, hand-rearing three tīeke (saddleback) chicks who were abandoned as eggs in the nest by their parents.

It is not unusual for birds to abandon a nest late in the breeding season, when the inclement weather makes it harder for birds to find food for their chicks. However, the decision to hand-raise birds is a tough one as it requires specialist skills and great dedication from our bird keepers. The process of rearing from egg to chick is very hands-on for the first 36 days with the first step, once the eggs were collected, being to place them safely in a temperature controlled incubator that replicates the warmth of their parents and incubates the eggs. 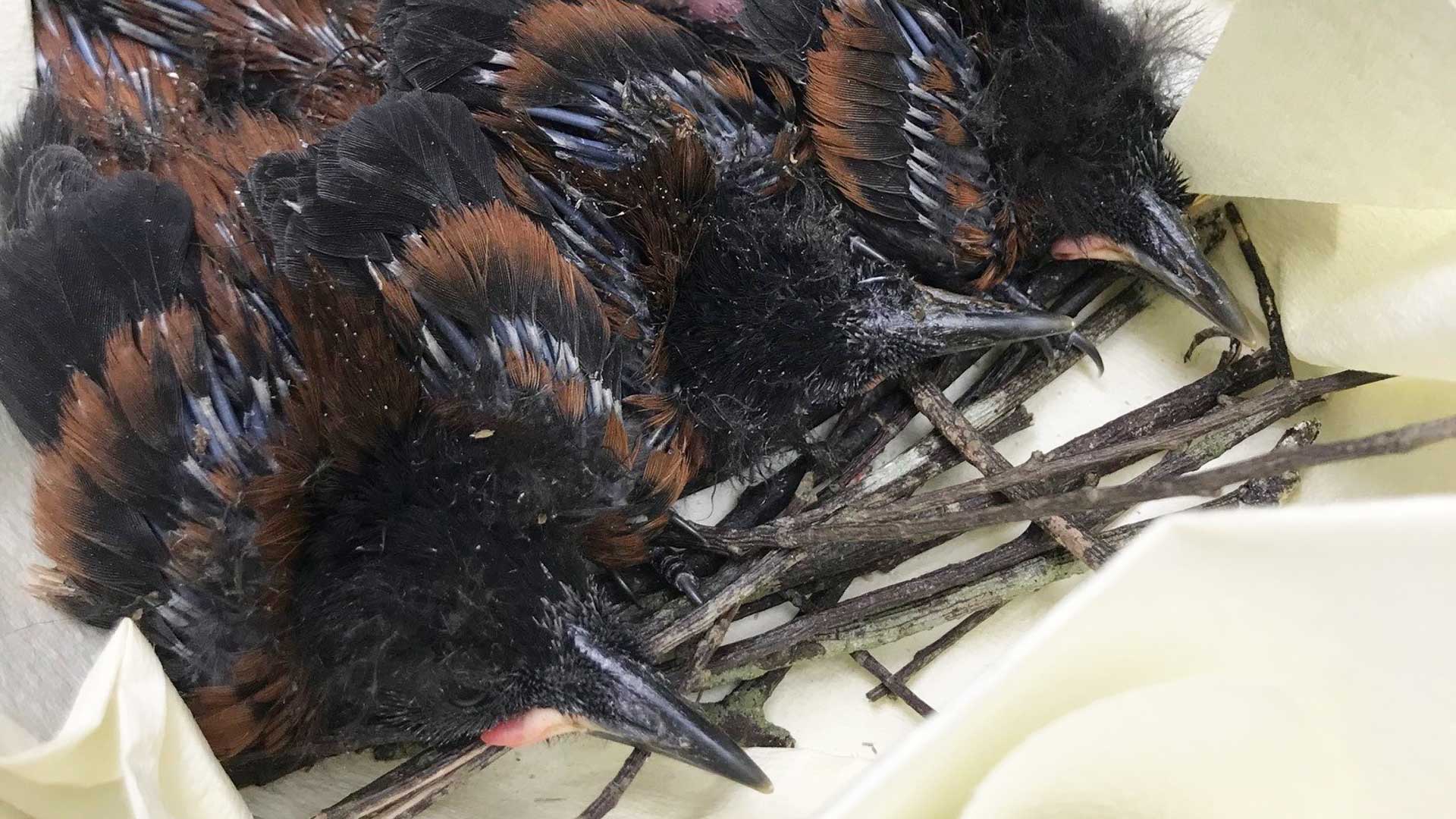 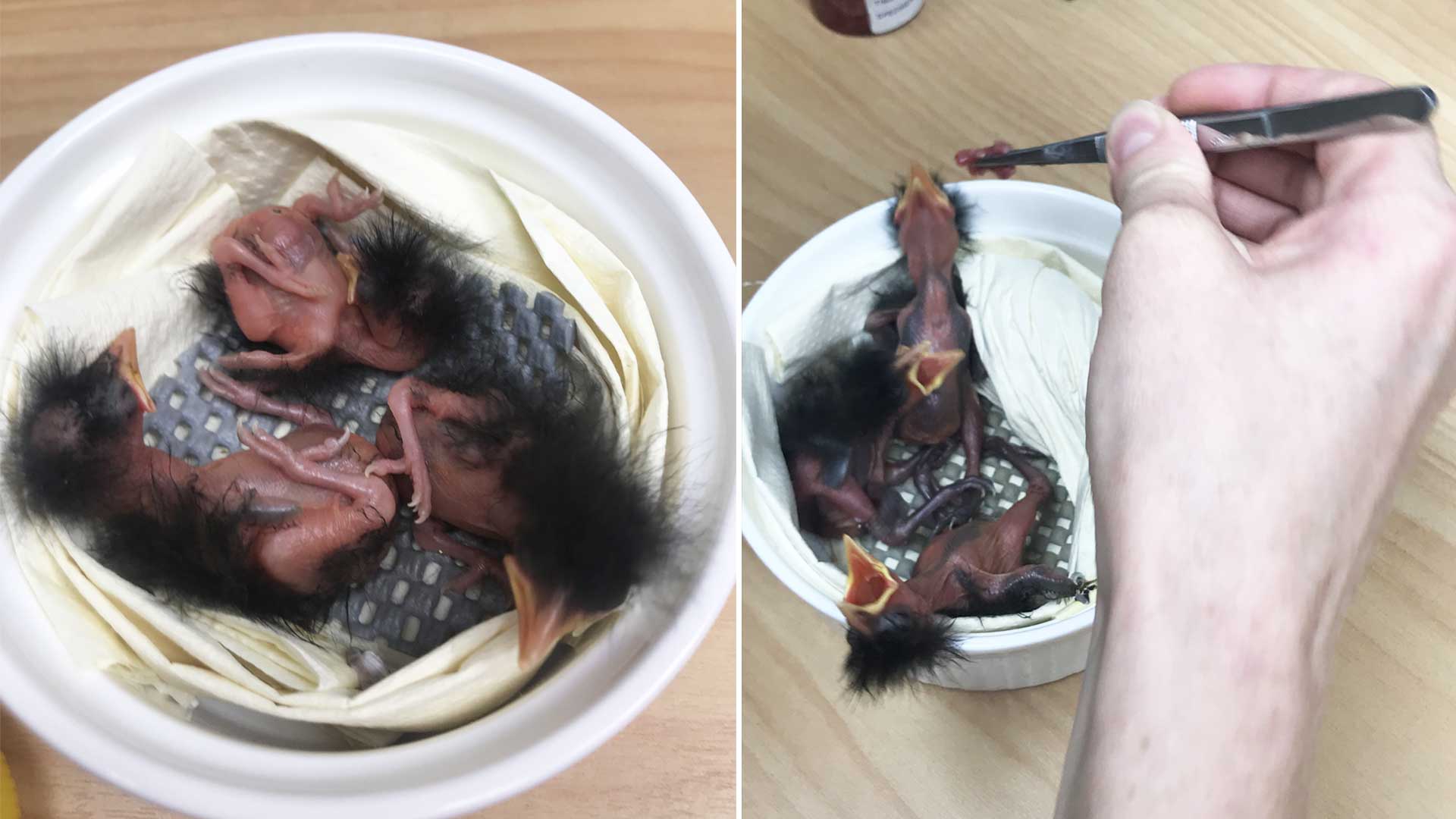 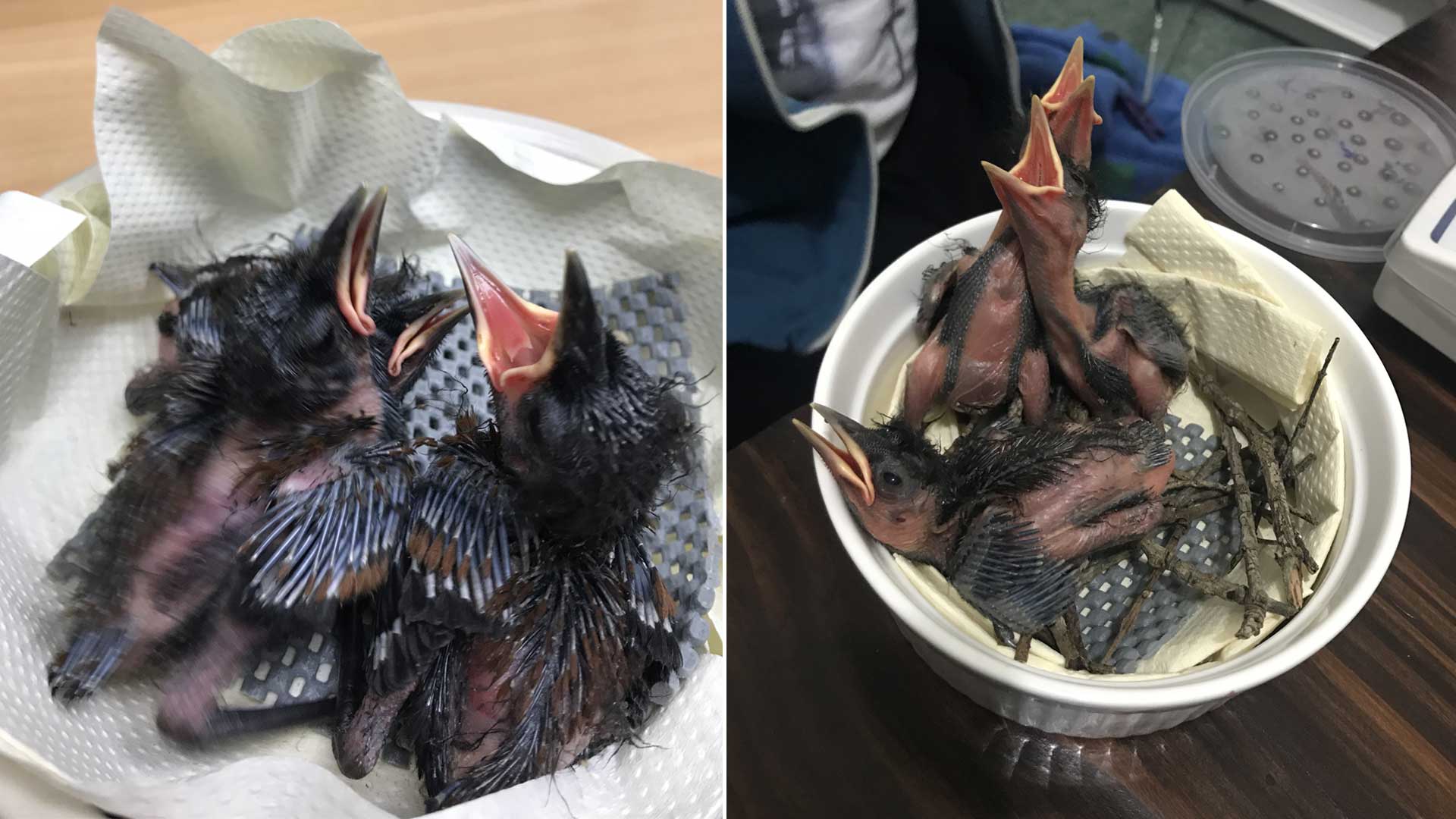 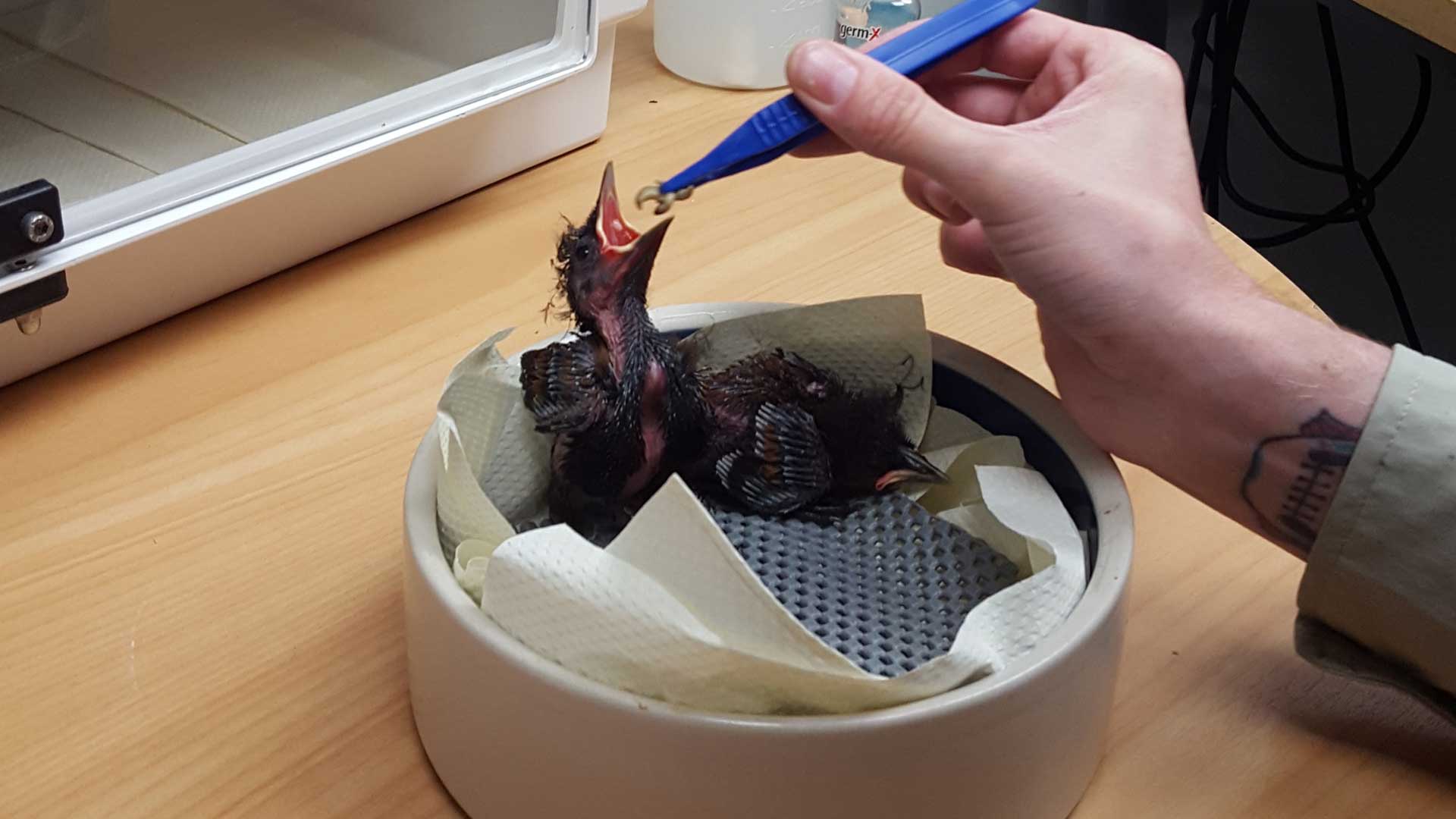 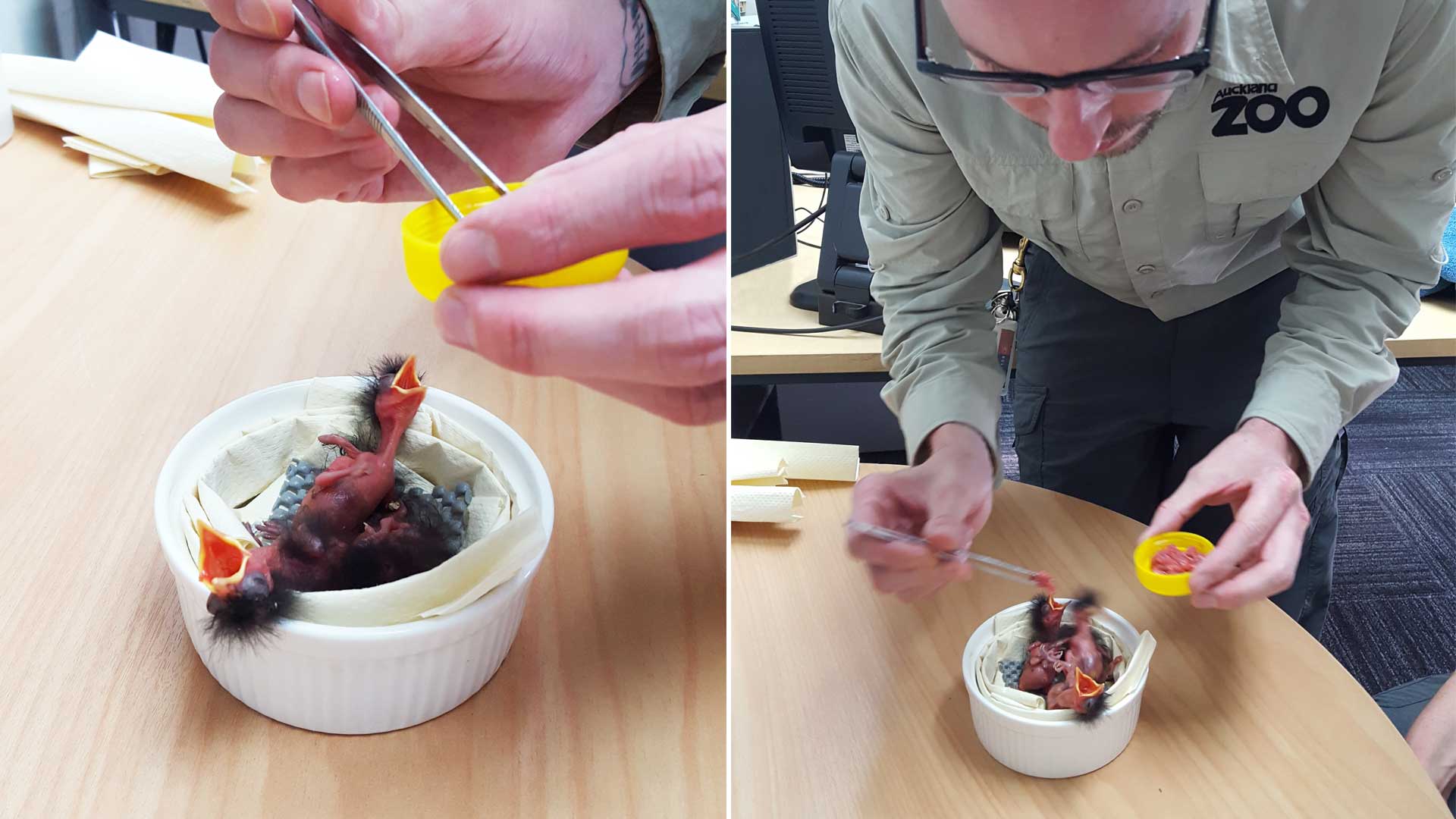 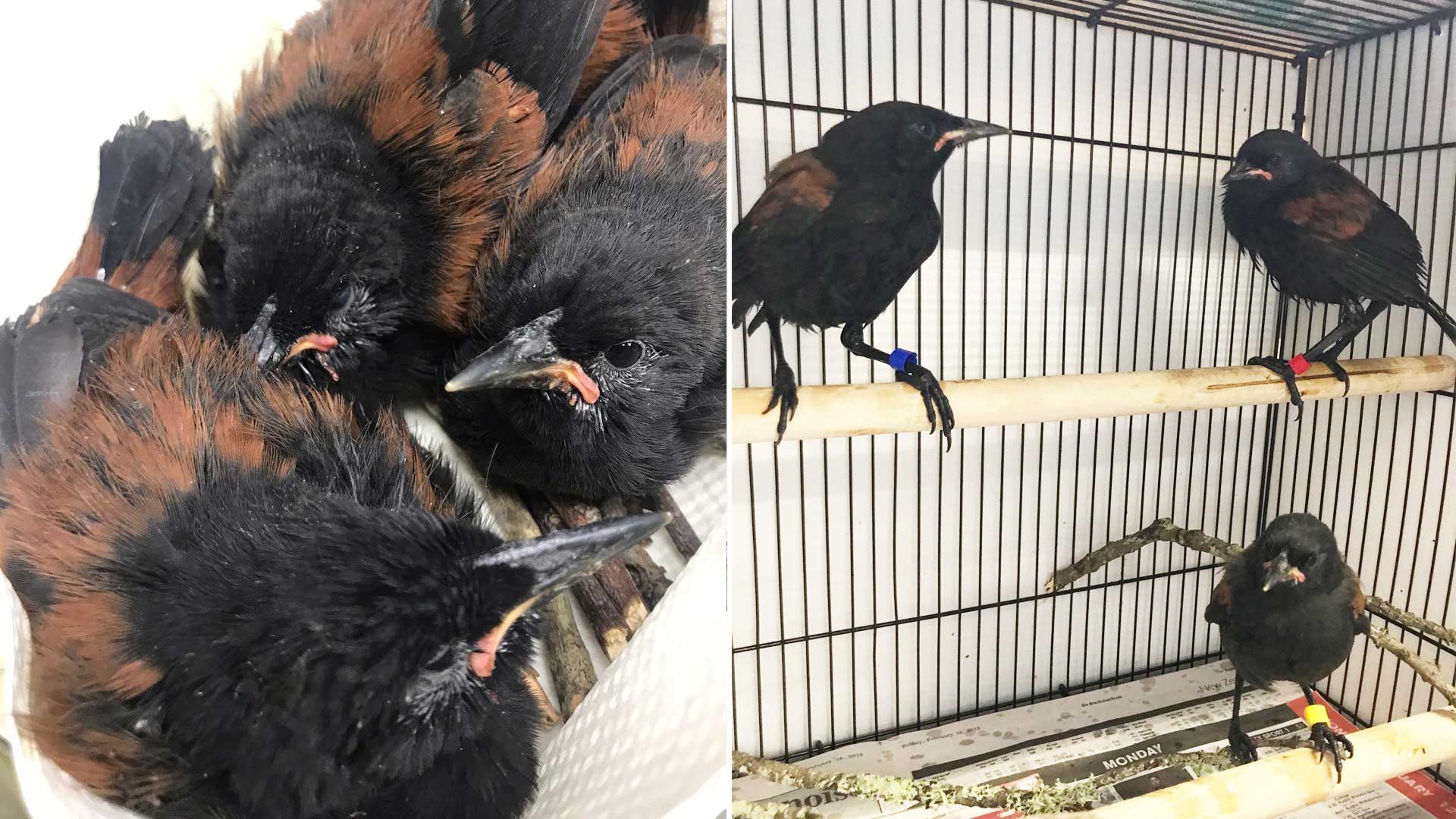 The chicks hatched successfully after 18 days of incubation and received just fluids for the first few hours while they absorb the rest of the yolk hidden inside them.  Then the real hard work begins with chicks being fed hourly from 6am in the morning until 11pm at night! On day three this schedule was reduced to two-hourly feeds and once they reached day twenty-two, the frequency of their feeds dropped again to every three hours.

Throughout the rearing, the tīeke chicks were fed a delicious diet of finely chopped rat-pups and juicy papaya - fed by tweezers into their gaping mouths. This was supplemented with vitamins, minerals and probiotics to maximize their health and immunity. Towards the middle of the rearing period we introduced small insects including crickets, waxmoths and their larvae and mealworms to the diet. It was only at 30 days of age that the chicks began to find their feet, fledge from their artificial nest and start feeding on their own.

As Auckland Zoo's team leader of birds Carl says "Tīeke are so charismatic! It’s been fantastic to be able to hand raise several of these unique birds. The early morning and late nights of caring for them is always worth the hours of time it takes to do it. It’s a real labour of love and can take around 50 days from start to finish. It’s a very rewarding process to go through all the different stages of their development with them; from incubation, hatching, growing and fledging, to where they are then self-sufficient and able to look after themselves." To our knowledge, this is the first time tīeke have ever been hand-reared!

Once common throughout the North and South islands, tīeke belong to the same wattlebird family as the endangered kōkako and the extinct huia. Tīeke roost and nest in cavities, making their eggs and young highly vulnerable to predation by introduced mammals. This means the species can only live and thrive where pests are at very low numbers or excluded entirely. As a result, just forty years ago, North Island tīeke had been almost completely exterminated by introduced rats, stoats, cats and possums and were restricted to just one small group of islands north of Auckland. Fortunately today they can be found flourishing on many recently pest-mammal-eradicated islands in Auckland’s Hauraki Gulf, such as Rotoroa, Tiritiri Matangi, Rangitoto and neighbouring Motuihe Island, and further afield thanks to an intensive programme of reintroductions carried out by Department of Conservation and several partners.

This amazing conservation success story just goes to show what can be achieved when introduced mammals are eradicated and native species are given a chance to recover.

Tīeke are so charismatic! It’s been fantastic to be able to hand raise several of these unique birds. The early morning and late nights of caring for them is always worth the hours of time it takes to do it. It’s a real labour of love and can take around 50 days from start to finish.

The gorgeous tīeke are easily identified by the bright red appendages on either side of their beak known as "wattles" and the red-brown ‘saddle’ of plumage on their backs. Maori pūrākau (legend) tells that after Maui and his brothers trapped the sun (Te Rā), Maui asked his friend the tīeke to bring him cold water so that he could quench his thirst, but the bird stubbornly pretended not to hear him. Maui was irritated by this and seized the tīeke with his sun-warmed hands, scorching the bird’s feathers.

We believe it essential for all New Zealanders to see, hear and build a connection with the endemic species of this land and you can do just this in our New Zealand sanctuary, Te Wao Nui. Every visit you make to our zoo contributes to the Auckland Zoo Conservation Fund which enables us to do vital conservation work for endangered species all over the country and abroad.