In a first for New Zealand, Auckland Zoo is celebrating the arrival of a baby Galapagos tortoise, and has become only the second zoo in Australasia to breed this species.

The tiny tortoise, which weighed in at just 60 grams when it hatched out of a billiard ball- sized egg on 30 December, is the offspring of first-time parents; mum Chippie (47 years) and dad Smiley (46 years) – still youngsters themselves in Galapagos tortoise years.

As the world’s largest tortoise, if this hatchling is a male, he will grow up to 4000 times in body-mass to reach more than 250kg (quarter of a tonne!), and if female to over 2,500 times (one of the largest changes in body mass from newborn to adult of any vertebrate), and could live for over 150 years!

“These long-lived, slow maturing reptiles are renowned for taking their time, so we’re delighted that they’ve finally bred,”

When the eggs were laid in the ground by female Chippie over four months ago, the Zoo’s Ectotherms team excavated them for incubation in a controlled environment to ensure their best chance of survival.  While the sex of this new arrival won’t be known for quite a few years, its incubation at 30 degrees Celsius is likely to mean it will be female.

Curator Richard, who has observed these tortoises in their native Galapagos Islands and here at Auckland Zoo, says: “These island giants are extraordinary creatures whose story of tragic plunder and decimation, followed by modern understanding of their plight and gradual recovery, has much in common with many New Zealand species”.

“The redevelopment of our tortoise enclosure two years ago provided us with a fantastic and much larger climate-controlled indoor area and the capacity to hold two males separately, enabling us to welcome back our second male Willy from Ti Point Reptile Park. Willy’s return has most certainly been a great stimulant to Smiley as a male competitor, and we hope to see increasing success with higher rates of fertility among future clutches,” adds Richard. 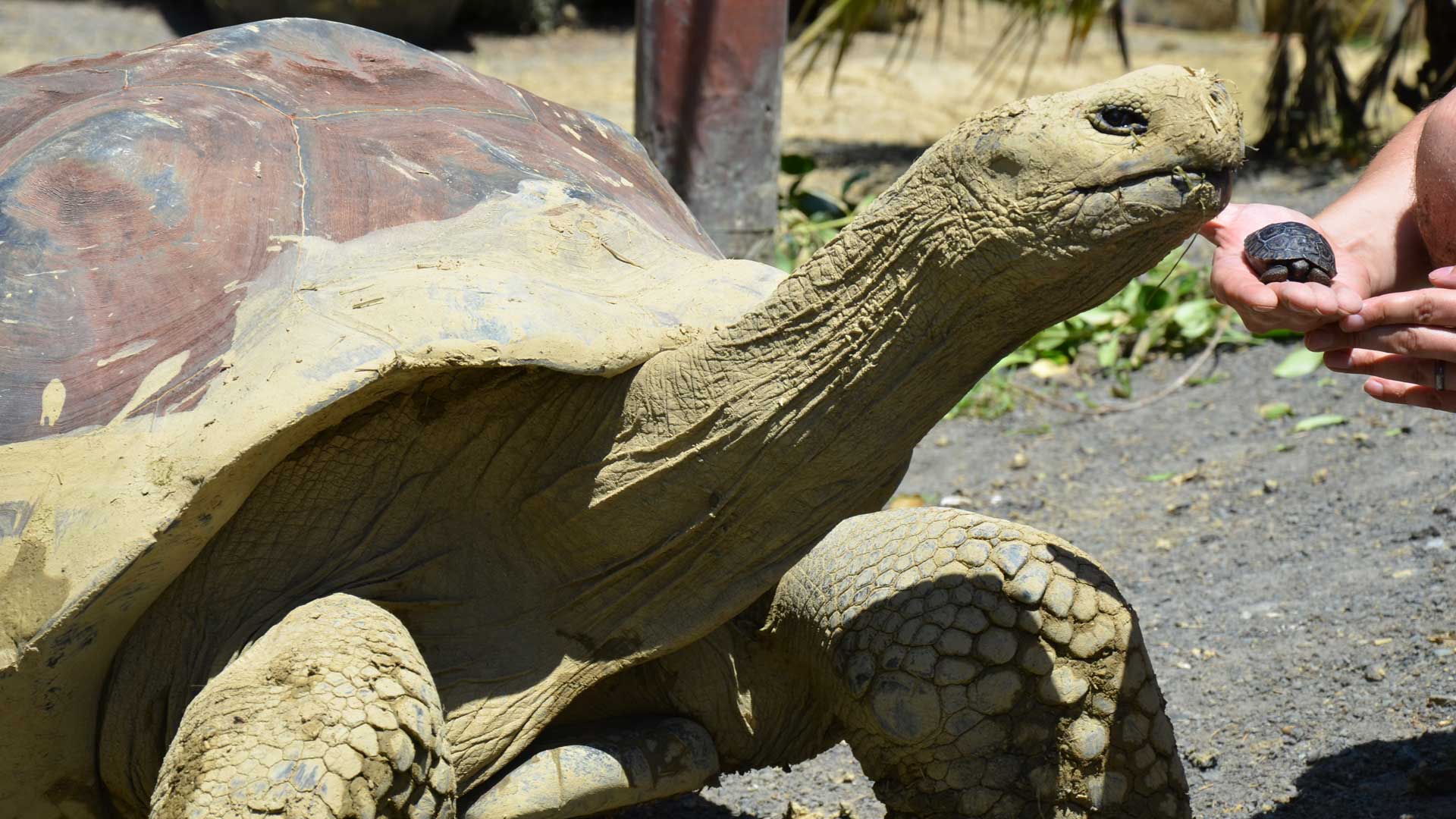 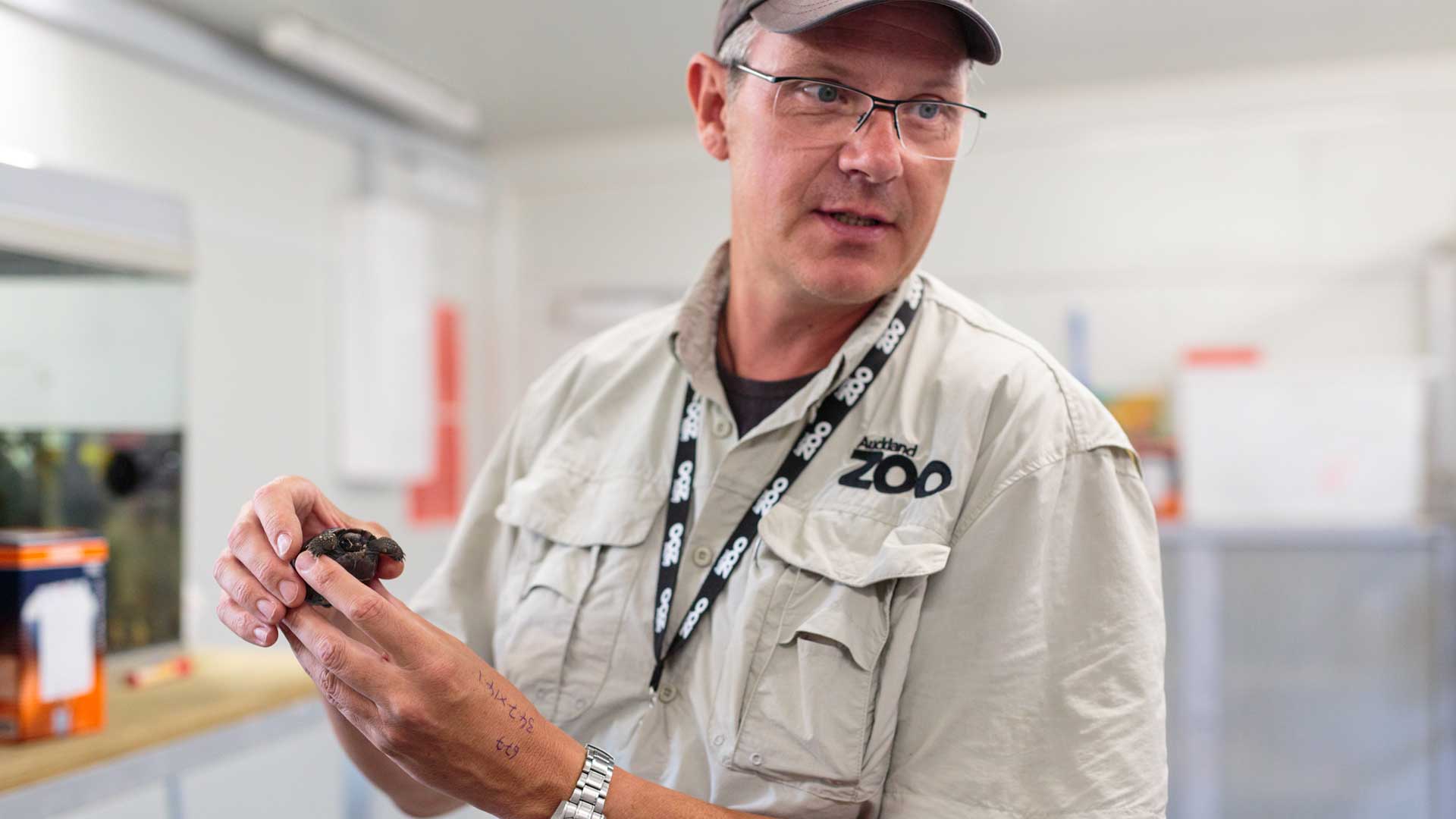 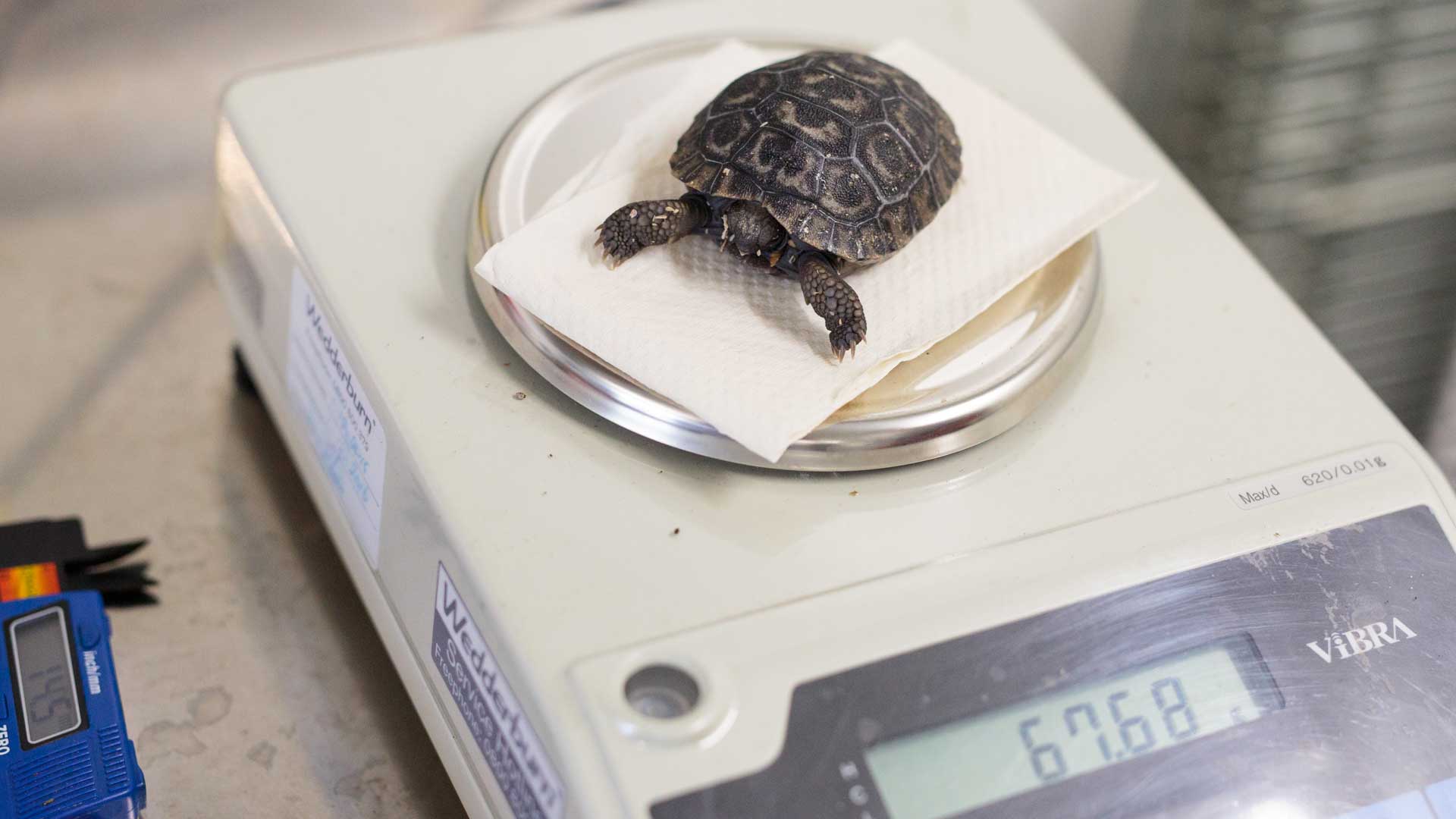 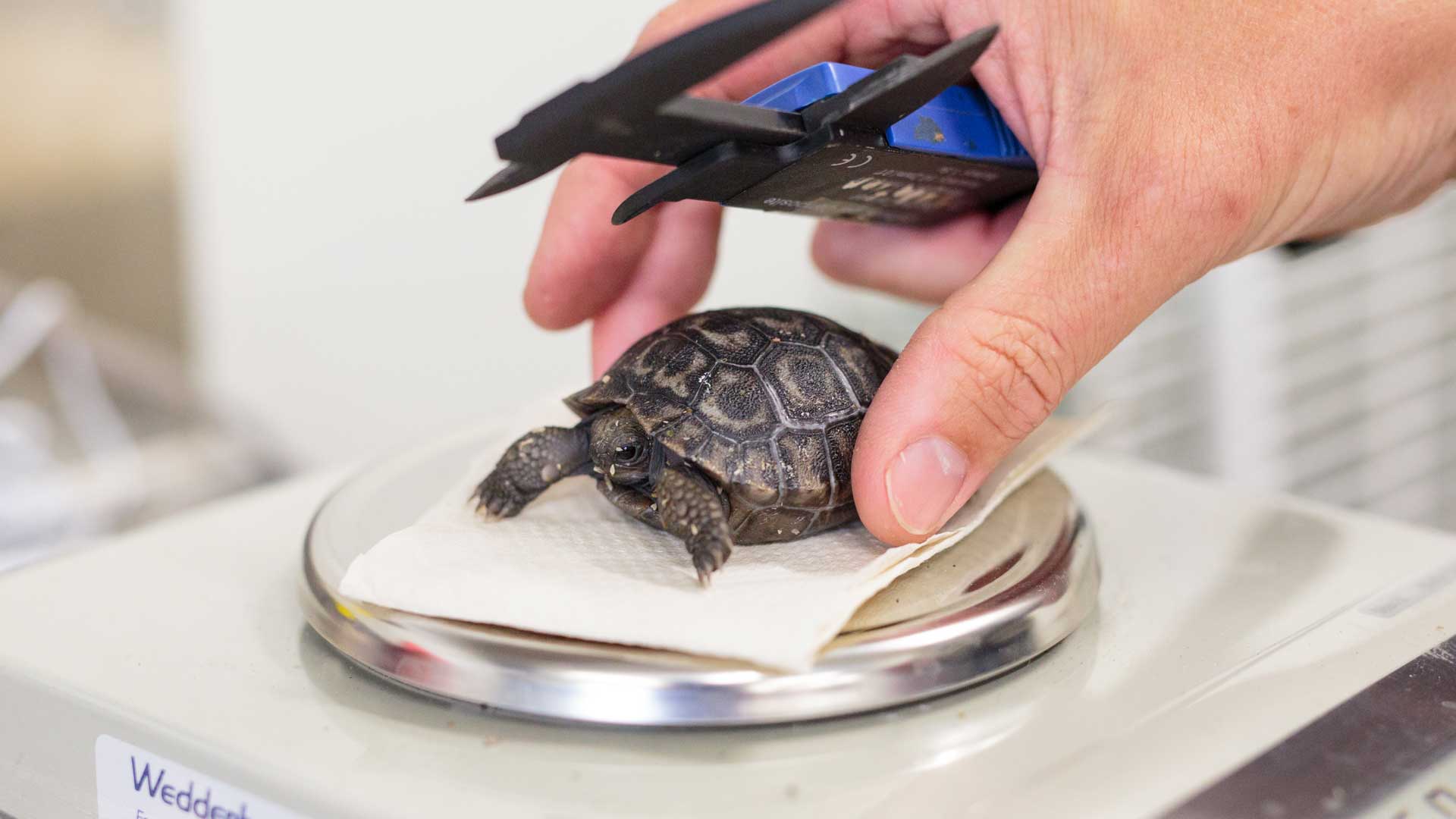 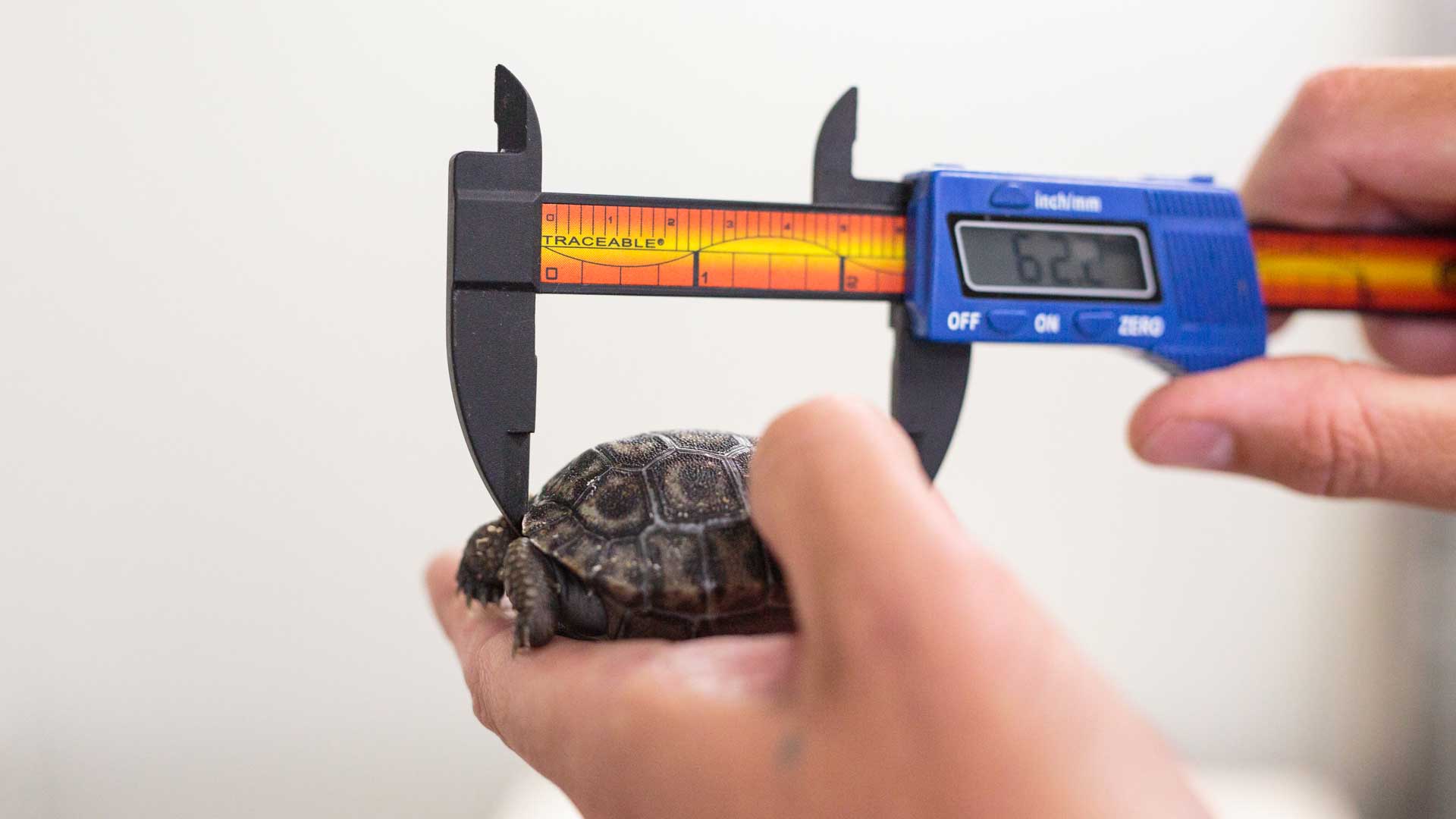 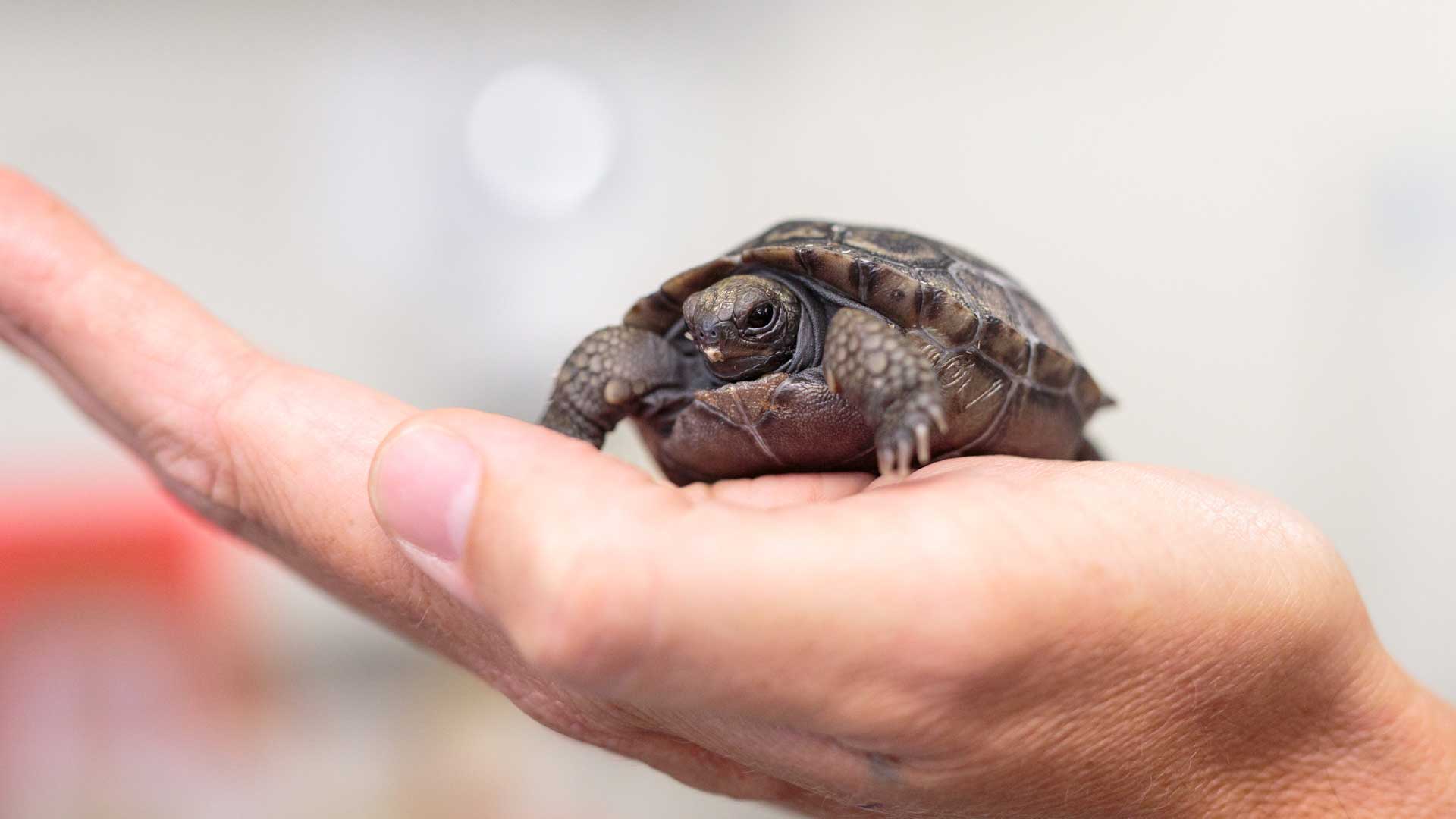 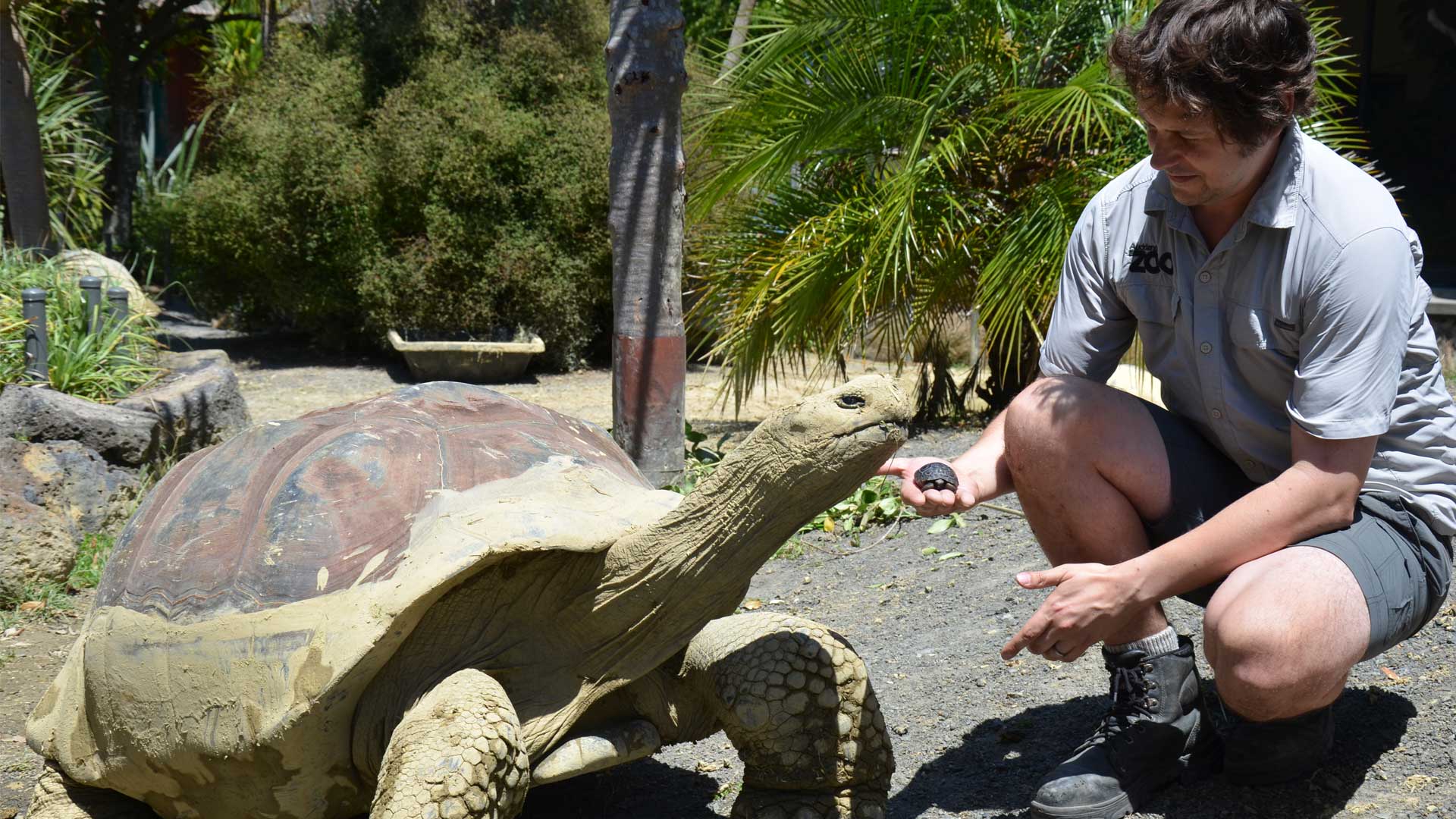 Our curator of Ectotherms and Birds, Richard Gibson with the hatchling

Weighing our 67 gram tortoise hatchling to monitor its growth

Richard measures the size of our hatchling with calipers

Our curator of Ectotherms and Birds, Richard Gibson with the hatchling

Weighing our 67 gram tortoise hatchling to monitor its growth

Richard measures the size of our hatchling with calipers

“In addition to their exploitation for food and trade by early sailors visiting the islands, introduced mammalian predators including rats and feral pigs, and habitat destruction caused by goats nearly wiped these tortoises out. Thanks to incredible and ongoing efforts to rid the Galapagos Islands of invasive species and successful captive breeding and release programmes – just as we’re doing on islands all around New Zealand to help so many of our own endemic species - the Galapagos giant tortoise species are slowly recovering.”

While Zoo visitors are not yet able to see New Zealand’s first baby Galapagos tortoise, in the next few weeks the Zoo’s Ectotherms team will be looking to move it from its off-display facility and into a viewable enclosure at the Zoo’s Galapagos tortoise house.

Auckland Zoo will be soon be giving the public the opportunity to name its treasured first Galapagos tortoise hatchling through an online voting competition.  Keep an eye on the Zoo’s Facebook and Twitter pages for details.