With Melbourne Zoo veterinary hospital staff being deployed to animal triage centres in Victoria’s Bairnsdale and Mallacoota (coastal towns where raging bushfires had residents fleeing to the beaches), they were keen for Kylie to assist with the husbandry and veterinary care of hospitalised koalas.

Both a vet nurse and a zoo keeper with 20+ years’ experience, Kylie jumped at the chance to share her skills and help her Aussie mates, many of whom she says “put their entire lives on hold to help bushfire-affected wildlife”. Auckland Zoo reached out early to its Australian colleagues offering to help in any way we could, and funded Kylie to do this Wild Work.

“Like this unprecedented Covid-19 situation we’re now in, everyone was pulling together to help, and people were so kind and generous - like City Tempo Hotel in Melbourne who put me up for free for my entire stay,” says Kylie.

The koalas that became Kylie’s world all had burns of varying degrees, primarily to their feet, hands and noses.

“These were koalas rescued by members of the public or wildlife agencies and taken to Mallacoota triage centre. Here they were assessed by on-site veterinarians and were deemed critical, but still having a fighting chance – meaning with treatment and in time they’d likely be able to be released back to the wild,” says Kylie.

“Upon my arrival at Melbourne Zoo they had already received several weeks of daily treatments for their burns and were now progressing to alternate days as they continued to improve and heal."

“Upon my arrival at Melbourne Zoo they had already received several weeks of daily treatments for their burns and were now progressing to alternate days as they continued to improve and heal." 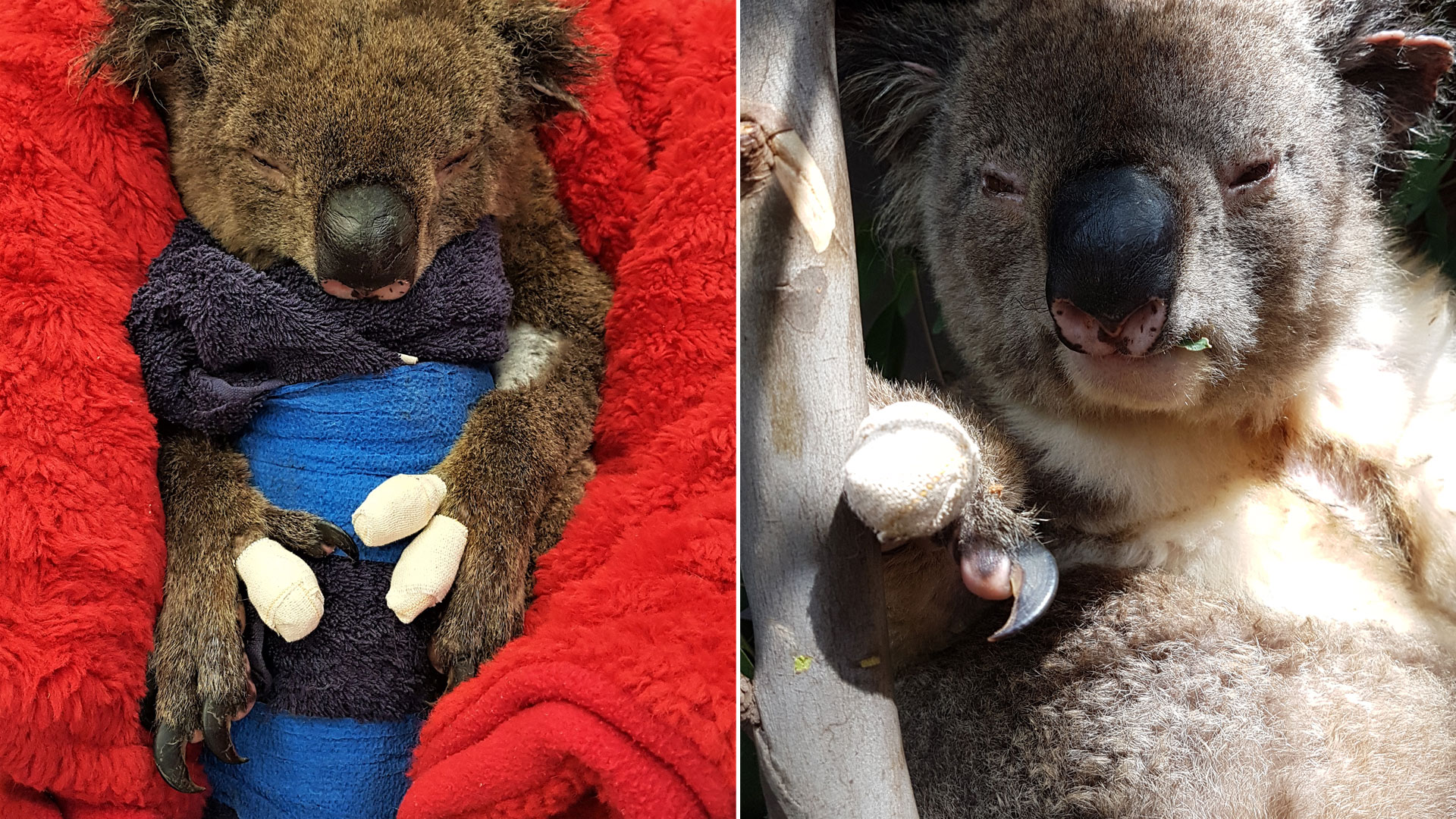 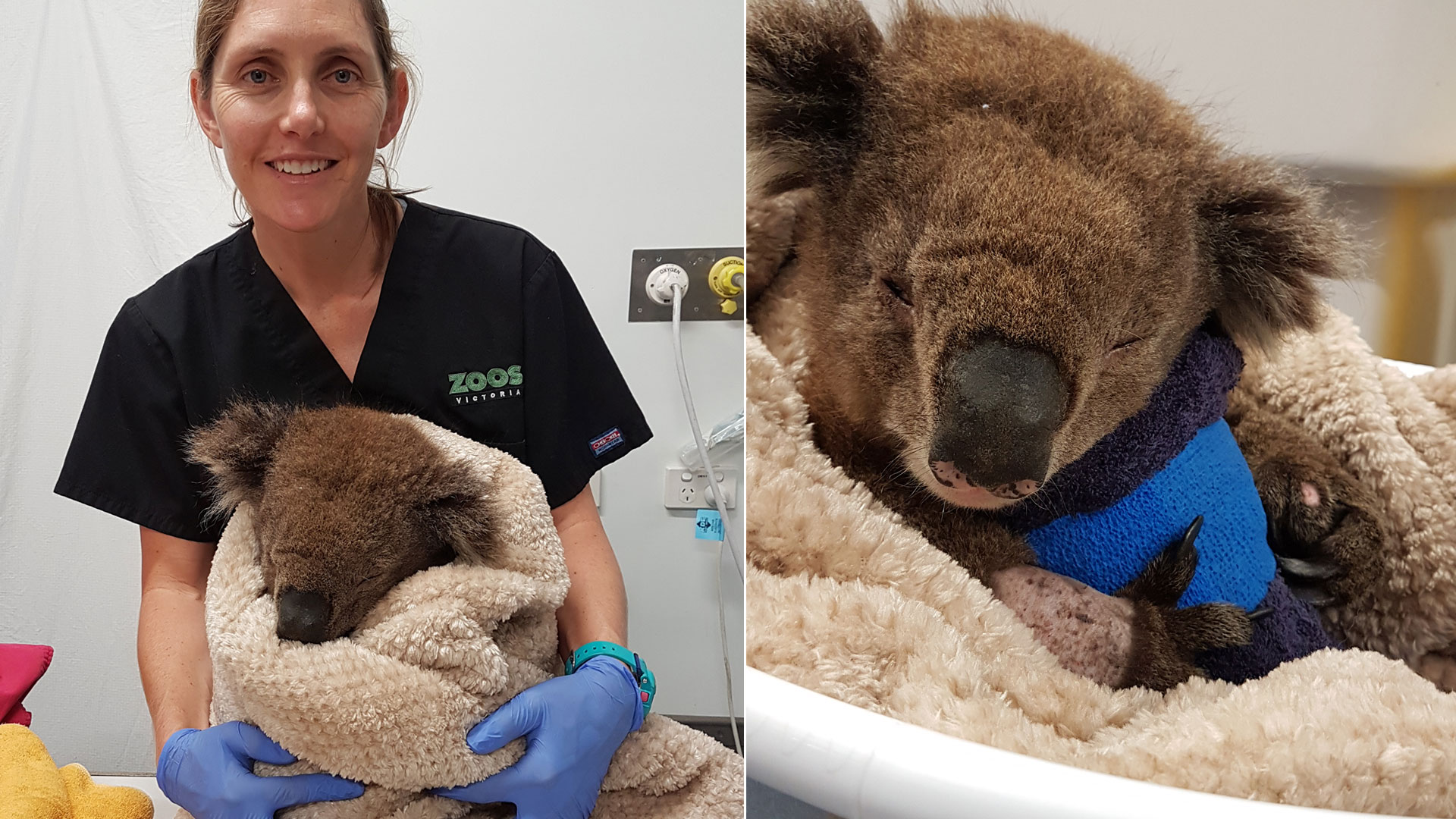 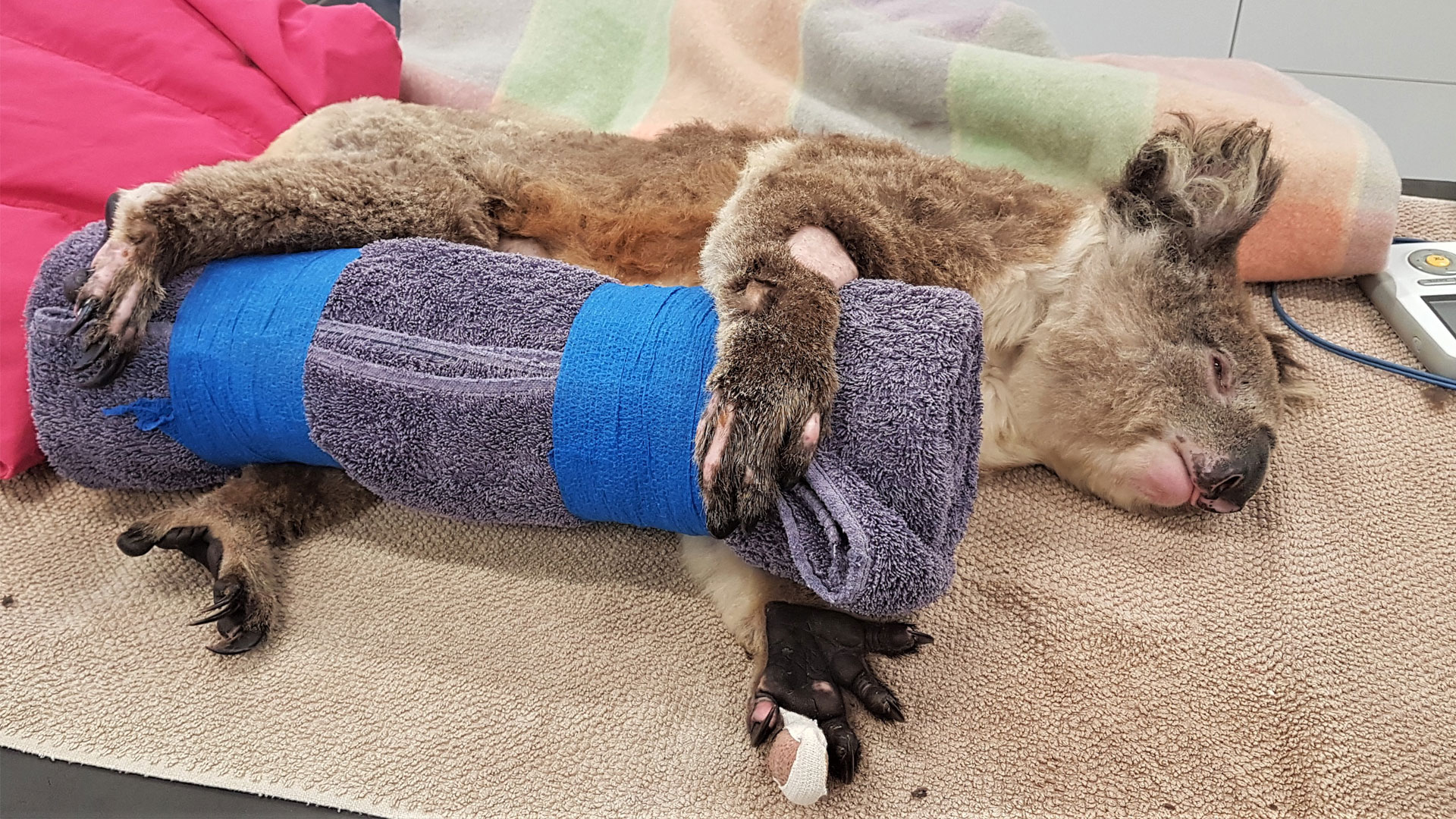 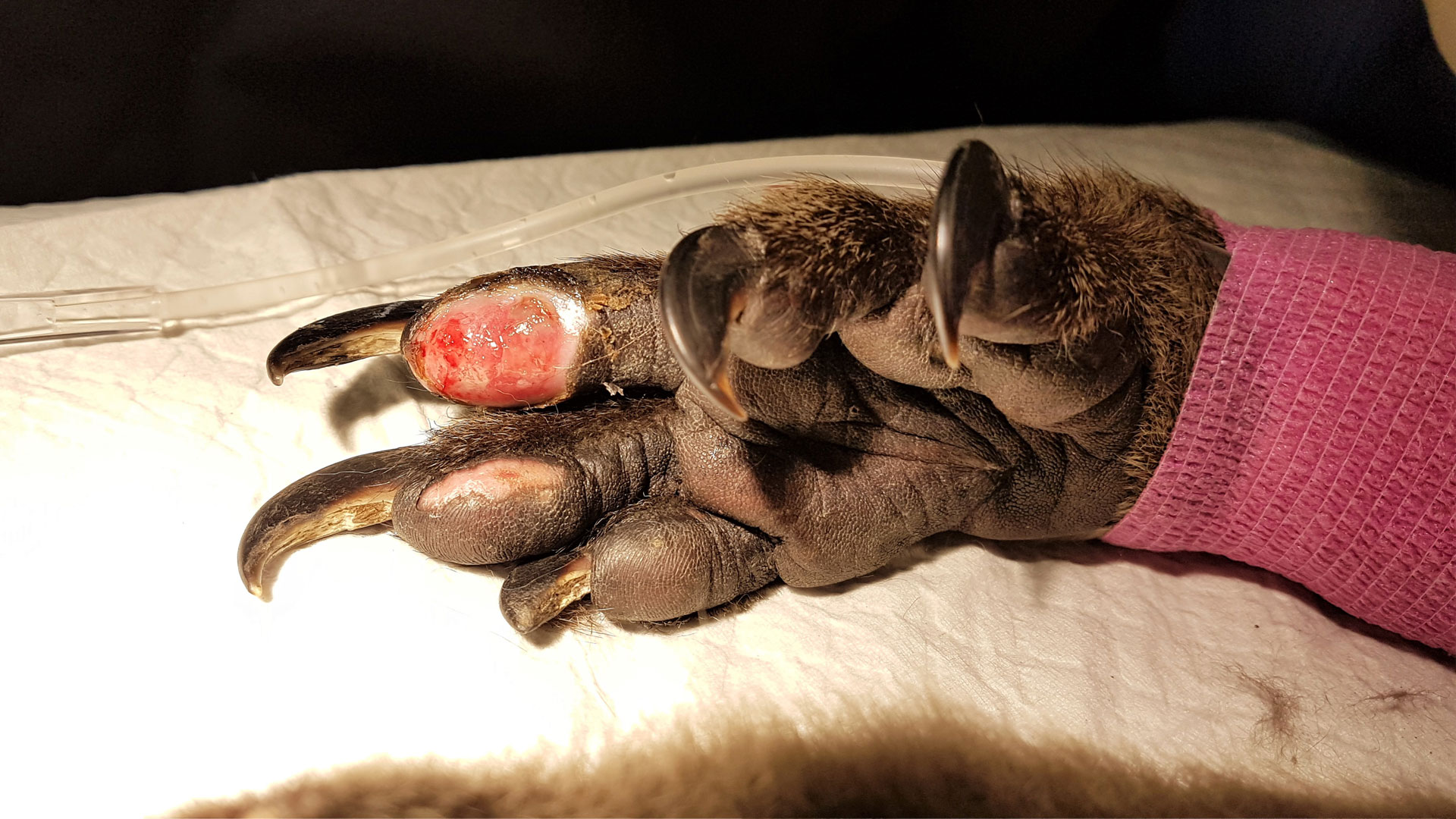 Vet nurse Kylie with a koala patient Annie, who is soon to be released to Phillip Island (a large managed nature reserve) south of Melbourne.

A koala patient recovering from a veterinary procedure

Vet nurse Kylie with a koala patient Annie, who is soon to be released to Phillip Island (a large managed nature reserve) south of Melbourne.

A koala patient recovering from a veterinary procedure

“Each bandage change required a general anaesthetic, and two to three vet staff for what could be an intense one to three-hour procedure. After removing their bandages, the burns were assessed and cleaned with saline. On areas where there were no burns, we gently exfoliated; this helped to promote new skin growth, which under normal circumstances would naturally happen if these koalas were climbing trees. Topical antibiotic cream was then applied to aid healing before we dressed their wounds with fresh specialised bandages. Melbourne staff had really mastered the art of applying the bandages so the koala could still use their hands and feet, which they rely heavily on to move around.

The koalas were given intravenous fluids to support their organs whilst anaesthetised and their blood and urine was tested to ensure their vital organs were coping with the intense treatments needed for their recovery. Outside of this treatment, they were prescribed an infant pain relief syrup which they eagerly took from a syringe. Due to their exclusively gum diet and specialised digestive systems, other more commonly used pain relief was just not effective.”

As the photos show, towels were folded and taped like substitute tree branches so that the koalas could hold on and rest in a natural and secure position for them whilst they recovered from the anaesthesia. Re-purposing of the household washing basket made an excellent recovery place.

Says Kylie: “For each koala’s anaesthetic recovery, we wrapped them in a thick blanket with a ‘towel branch’ to cling to. Once they were able to sit up by themselves, they’d be transferred to a washing basket which was enclosed by another basket ‘roof’ on top. It was great Aussie ingenuity that worked perfectly and made me smile every time!  We’d continue to closely monitor them and would offer them some gum leaves very soon after they woke.  “

Unlike Australia’s kangaroos, birds and snakes, koalas don’t flee from fires, but climb up into the tree canopy, curl up into a ball for protection and wait for danger to pass. Sadly, the unprecedented scale of this summer’s bushfires meant this strategy proved fatal for many of these precious marsupials – a species already massively impacted by loss of habitat.

As experts explained, a koala could easily overheat and fall to the ground then burn to death or suffer smoke inhalation and burn its paws and claws when trying to climb down.

“Koalas are so reliant on their hands and feet to climb. Two of the koalas we were treating were most likely going to lose one claw which may not grow back due to damage of the nail bed. I’d think it would be like a guitarist losing a finger. They may be able to adapt depending on which claw was lost, but they would have to re-train themselves to climb,” says Kylie.

“We had one koala with third to fourth degree burns, but a lot of his other burns were superficial and healing up well. One of the females, ‘Princess Fiona’ had a very pink nose when I arrived and after two weeks, it was amazing to see it was turning black again.”

When not doing intensive treatment procedures, a lot of Kylie’s and her Melbourne Zoo colleagues’ time was spent caring for these VIPs (Very Important Patients) - keeping them cool and comfortable, and feeding them their favourite eucalypt gum leaves.

“The koalas were in separate hospital enclosures outside, with males and females kept separate to avoid any tension. They all had multiple branching frames, with both vertical and horizontal poles, so that as they improved and became increasingly mobile, they could move about more. We also made sure they had plenty of shade and browse too.

True to form, Melbourne weather was changeable. Some days the temperature would soar to 43 degrees, and the next day, rain!  On extremely hot days we would spray the browse around them to help cool their environment down. They were also provided with a covered area for them to shelter from the elements. We didn’t want their bandages to get wet, but sometimes they took a bit of convincing to get out of the rain,” says Kylie.

A nocturnal species, koalas spend most of their life sleeping - about 22 hours a day. Kylie says initially her koala patients would barely move, just stay in one place and nod off. But what they did respond to, and benefit enormously from, was being hand-fed.

“Koala only eat eucalypt gum leaves, are super fussy about which variety. They also prefer the new growth. We had loads of amazing eucalypt supplied by Healesville Sanctuary’s dedicated browse team and donations from around Melbourne that was stored in a massive portocom-sized chiller to keep it fresh. Because koalas don’t drink water (they absorb it through their food), we’d also spray the leaves to help with their hydration.”

Kylie says in contrast to New Zealand native wildlife, “who mostly hate us vet people” (which she says is a good thing because those they treat are essentially wild), surprisingly, her koala patients seemed to thrive on human contact.

“They are just such sweet little creatures. I guess it was because we were feeding them, but they adapted to us so well, and the more time we spent feeding them, it was so interesting to see that their weight would correspondingly increase, and to our pleasure, also their faecal (poo) pellet output." 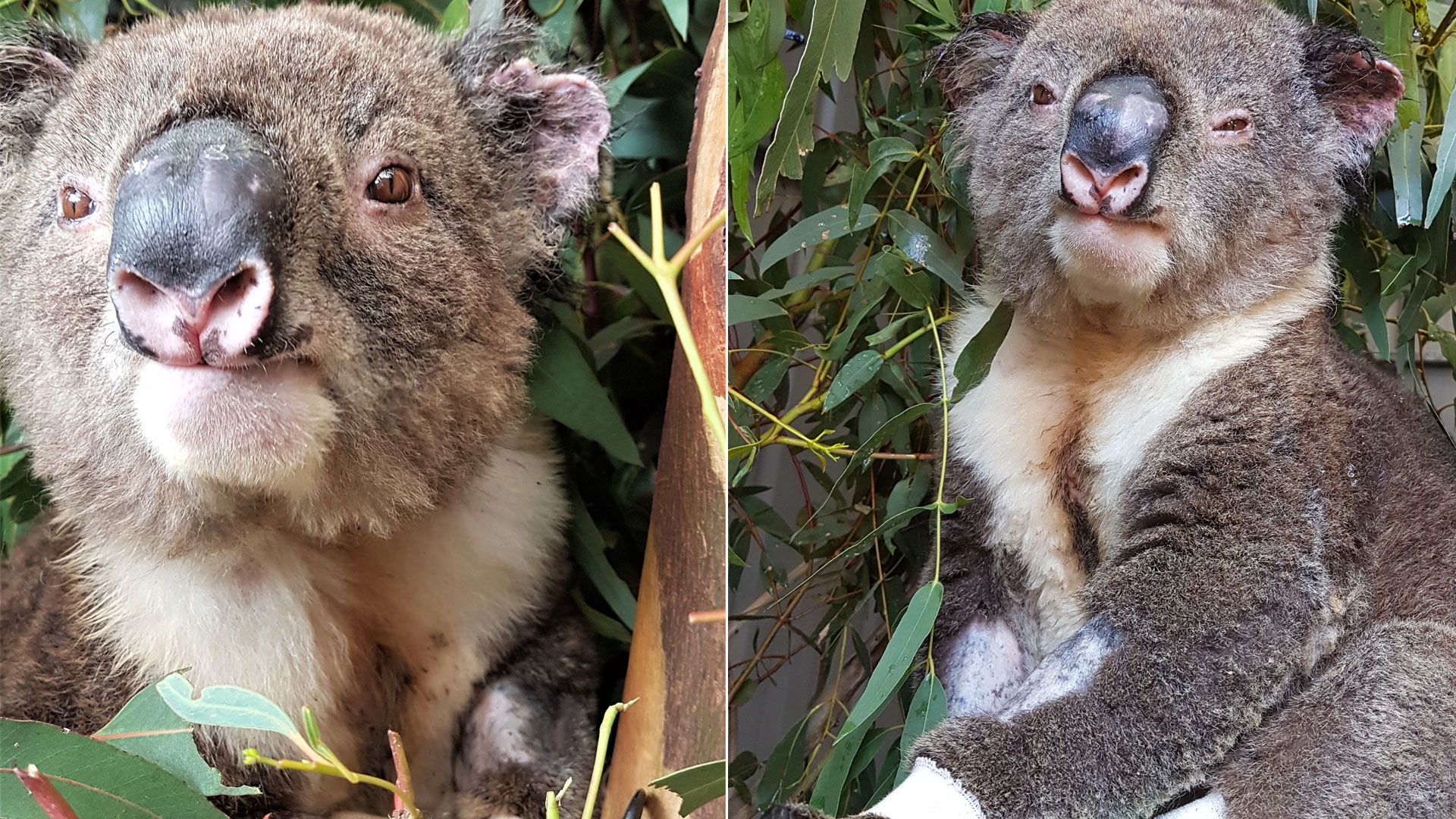 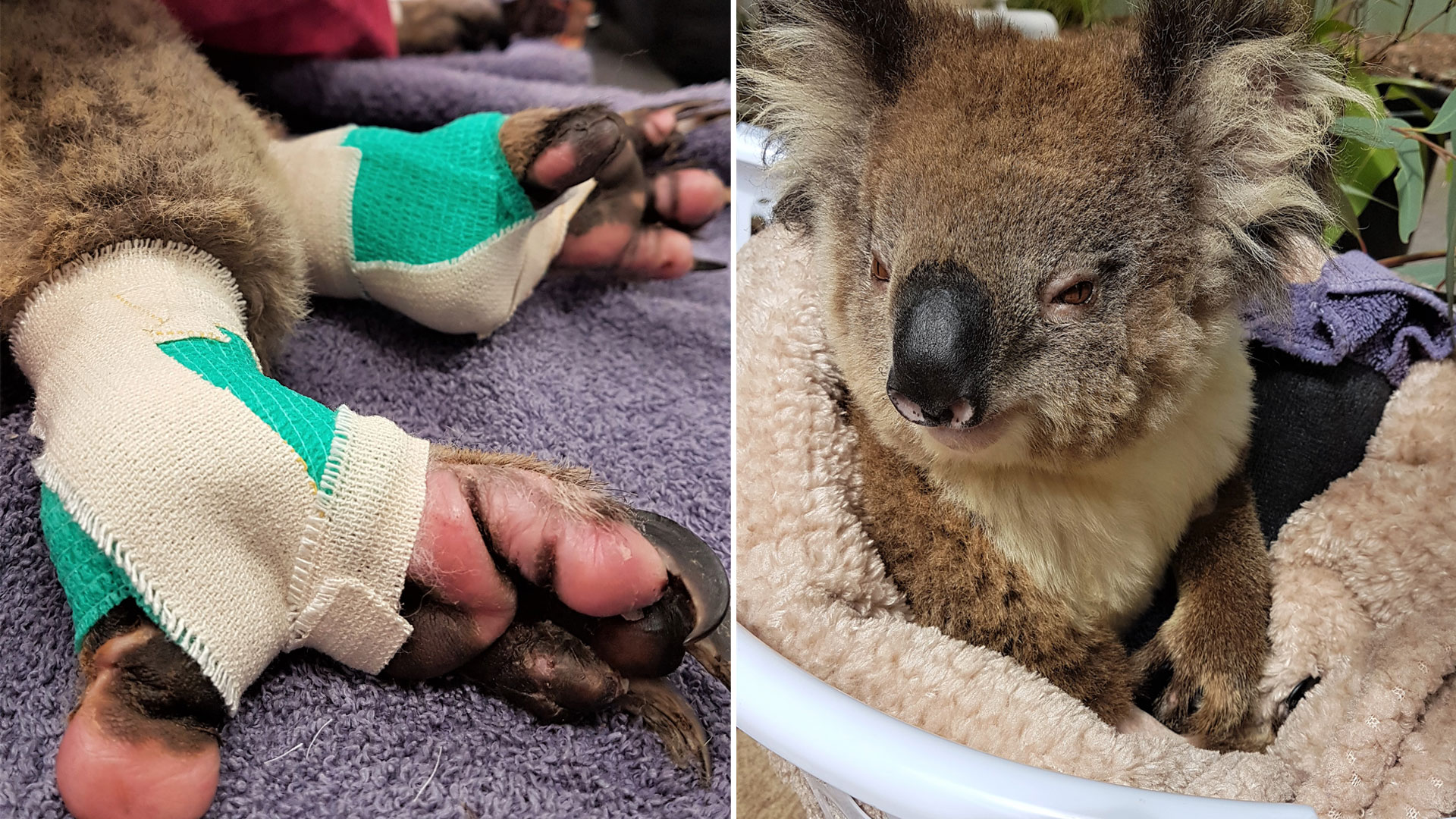 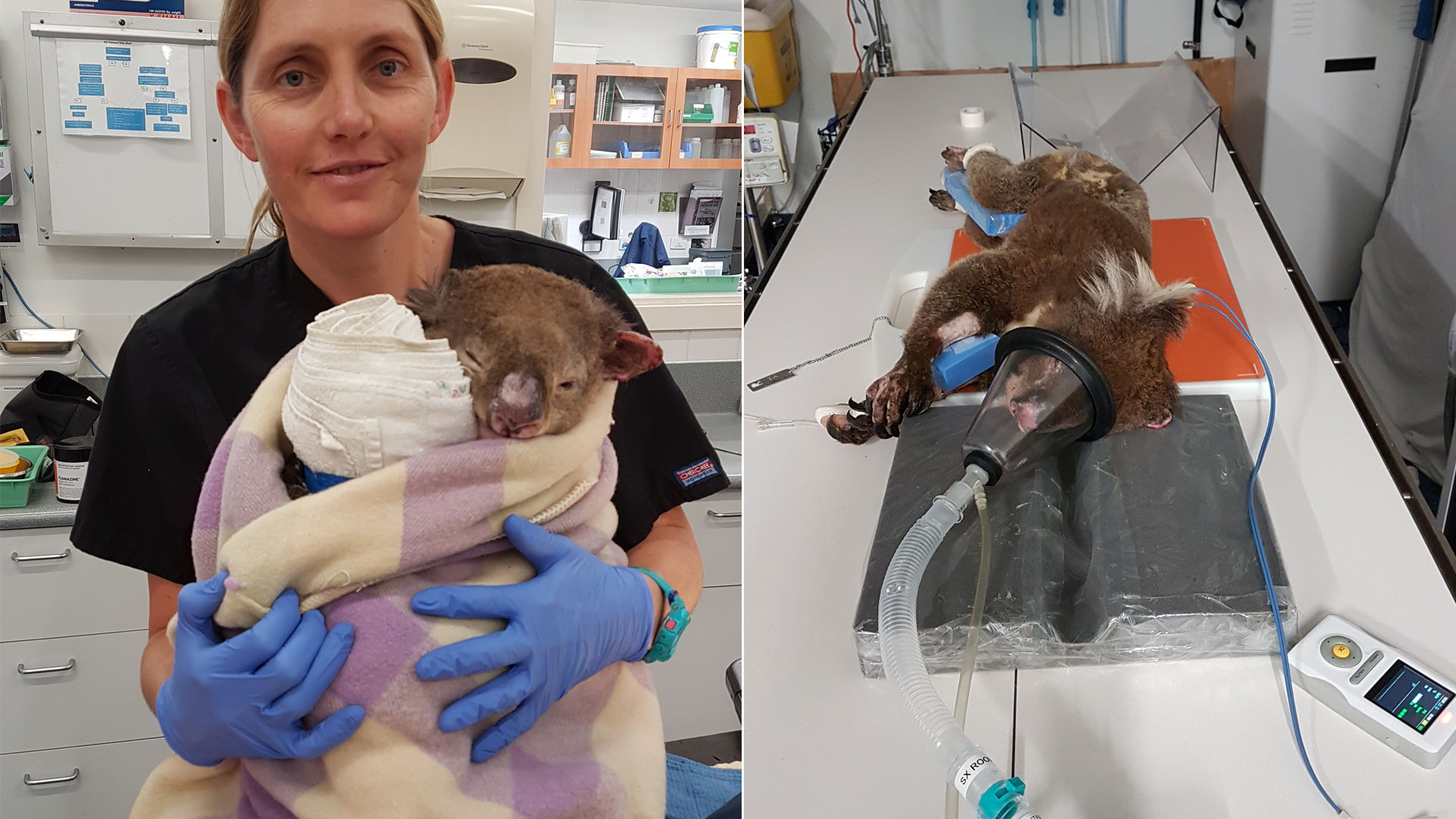 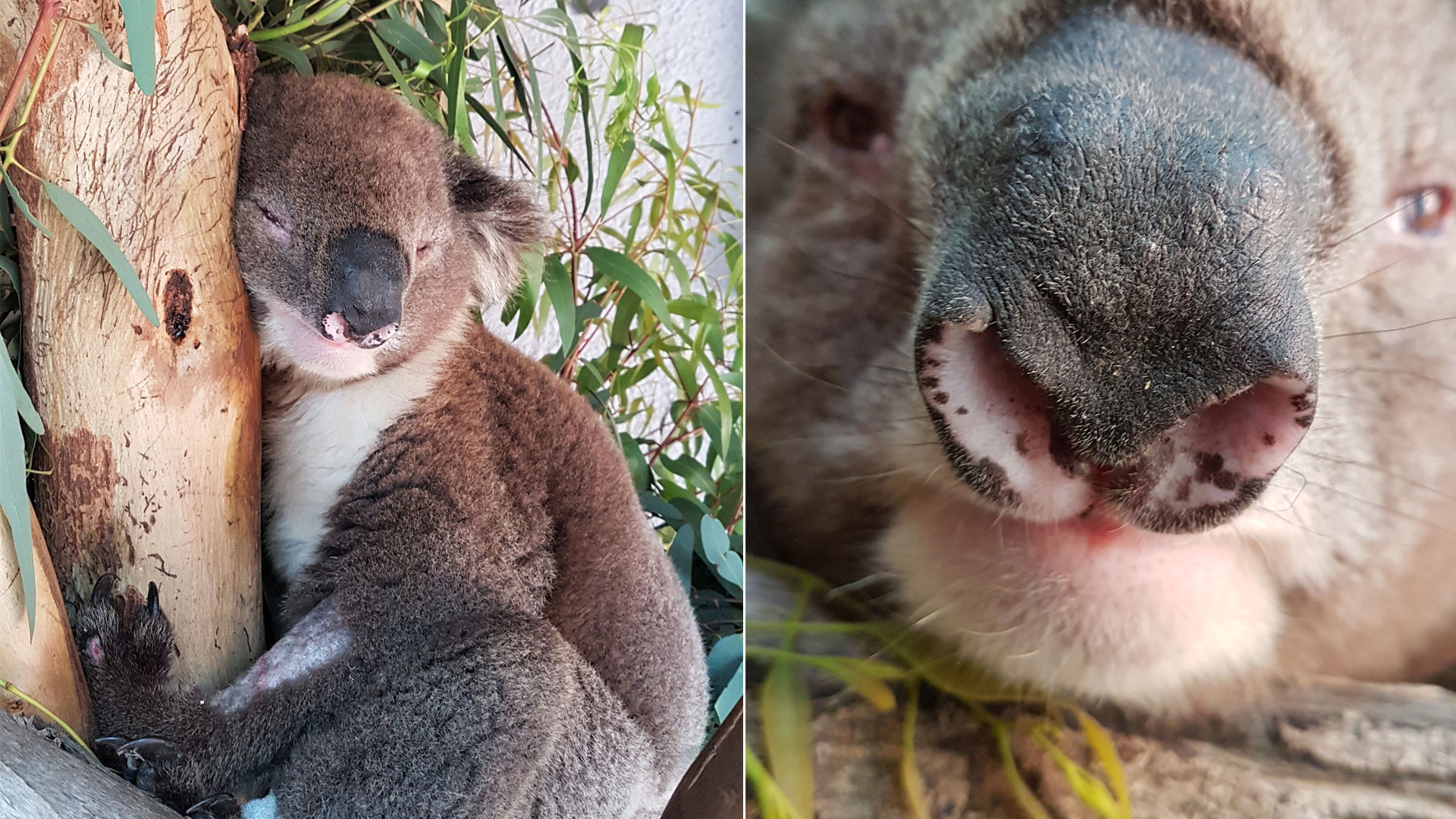 Poo pellets were very important! Every morning Kylie and her Melbourne colleagues would meticulously perform a ‘pellet count for each koala, which is exactly what it sounds like. This was to check these animals’ digestive systems were working efficiently. Koalas have slow digestion to enable them to absorb as many nutrients as they can – they can take around 72 hours to digest a single eucalypt leaf. So, what was found on that day may give an indication of what maybe happened three days prior, or if their health was declining.

“200 was an excellent pellet count for the males, the females around 180. Their counts were always slightly down after a procedure and this was closely monitored by the veterinarian. It became a bit of a game some days; if I found only 199 my OCD nature would tell me to keep looking until I found 200!”

The joy of seeing koalas heal

Kylie says during her last few days at Melbourne Zoo, it was incredibly heartening and rewarding to see these koalas getting better.

“By this stage we could change their bandages less often and were working towards checking them without an anaesthetic. Their skin was healing, their fur was beginning to grow back, and they were moving about a lot more, and also eating by themselves.

“The boys had even started vocalising, claiming their territory. If you’ve never heard it, it sounds pretty cool - like a low rumble, and a kind of growl.” (You can check out some koala sounds here)

Since Kylie’s time at Melbourne Zoo, some of these koalas have now progressed to the next stage of their rehabilitation journey. ‘Princess Fiona’, now at Healesville Sanctuary, and another female, ‘Annie’, are doing incredibly well and will next week be released to Phillip Island – a large managed nature reserve 140km south of Melbourne.

When Kylie got time to chat with Melbourne Zoo staff, including those that had worked at the triage centres, she says she felt a huge amount of admiration and compassion for the work they’d been doing.

“From the stories they shared, this was brave, tough work and incredibly emotional at times - they felt everything from sadness and grief to anger. These were the worst bushfires they’d ever experienced, with the impact on wildlife, habitats and people, just devastating, and it’s likely they won’t be the last,” says Kylie.

“For me, it was such a privilege to work alongside my Melbourne Zoo colleagues and help in this way. As always with these conservation efforts, you share your skills, but you always come away having gained skills and friendships, and learning so much to take into your future and share with others – which is the wonderful thing about working together.”

Every time you visit Auckland Zoo, you help support Wild Work like this – so thank you! While we know it’s not possible to visit us at present, if you’d like to support us from home, that would be wonderful. Find out more about our Wild Work here in Aotearoa and around the world. Another great way of supporting us (and giving to yourself and your whanau!) is to purchase an Auckland Zoo annual membership.

And lastly, if you'd like to help wildlife affected by the bushfires please make a donation to the ZAA wildlife fund.

Join us in helping wildlife & people affected by devastating bushfires

We’re championing some of our Wild Work community heroes!