Orangutan are currently divided into two species, the Bornean Orangutan and the Sumatran Orangutan. Both critically endangered, the Sumatran Orangutan is at extreme risk of being the first great ape to become extinct in the wild with only 6,600 (approx.) individual animals remaining. Both species are on the IUCN Red List of Threatened Species, a list of the world’s most endangered species that is kept and updated by the World Conservation Union.

Over six and a half million acres, the Leuser Ecosystem in Indonesia is home to a bio-diverse range of animal life and is one of the only intact areas of rainforest left in Southeast Asia. Despite this land having ‘protected’ national status, swathes of forest are cut down for industrial use for palm oil, timber, pulp and paper plantations. The greatest threat to the Bornean and Sumatran Orangutans is the destruction, degradation and fragmentation (road clearing) of their rainforest habitat. Hunting is also a major threat, although killing Orangutans is illegal, many animals are killed from starvation or in fires when forests are cleared to make way for oil palm plantations. Mothers are often killed for their babies as they are then on-sold in an illegal pet market.

The goal of the SOCP programme is to reintroduce Orangutan into the 14, 027 hectare Jantho forest reserve to establish a genetically-viable, self-sustaining wild population of this critically endangered animal species. A total of 49 Orangutans have been released into these expansive forests from July 2013 -  July 2016, bringing the total released here to 88 individuals.

The palm-oil industry is huge (estimated to be worth at least $44bn a year)...It’s not about to disappear. The same cannot be said for the orangutan. The Orangutan Land Trust states that 3,000 are lost each year due to habitat conversion (for palm cultivation) and hunting 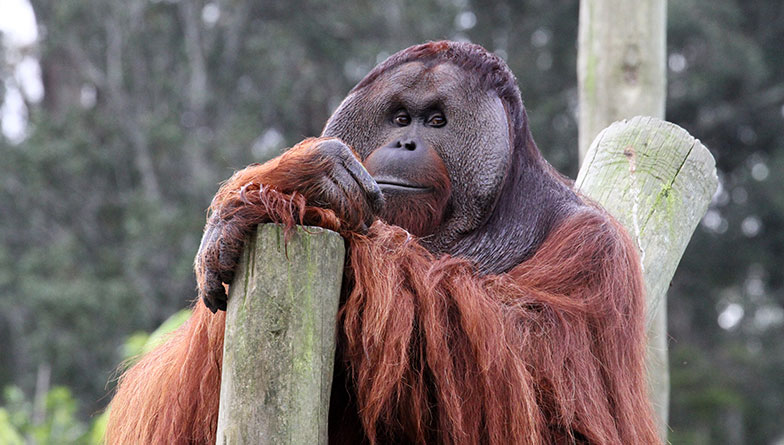 How can you help at home?

consumers can bring about positive changes through making informed choices when at the supermarket and asking for more transparency around the labelling of products.

Visit our Palm Oil page to learn more about how you can help this precious and endangered species by purchasing products with ethical and sustainable palm oil practices.