To the next tree and beyond!

Orangutans live, eat and even sleep high up in the trees and are the world's largest tree-dwelling animal. Have you ever wondered why orangutans find climbing trees such a breeze? It’s because they’re so incredibly strong! In fact, they’re 7 times stronger than your average human. Most of that awesome power is located in their arms .For them, climbing and swinging from branch to branch is like a walk in the park. Or the jungle!

Orangutans sleep in nests in the trees, making a new nest just about every night. They make these nests by bending a few large branches into the middle, and then weaving smaller branches into this frame, until it makes a comfy, bowl-like nest to sleep in. Orangutans can build a nest in 5-6 minutes and can make several a day. The nests are strong enough to support their body weight while still being comfortable to sleep in. When they think it might rain, they may sometimes make a roof or shelter out of branches and leaves. 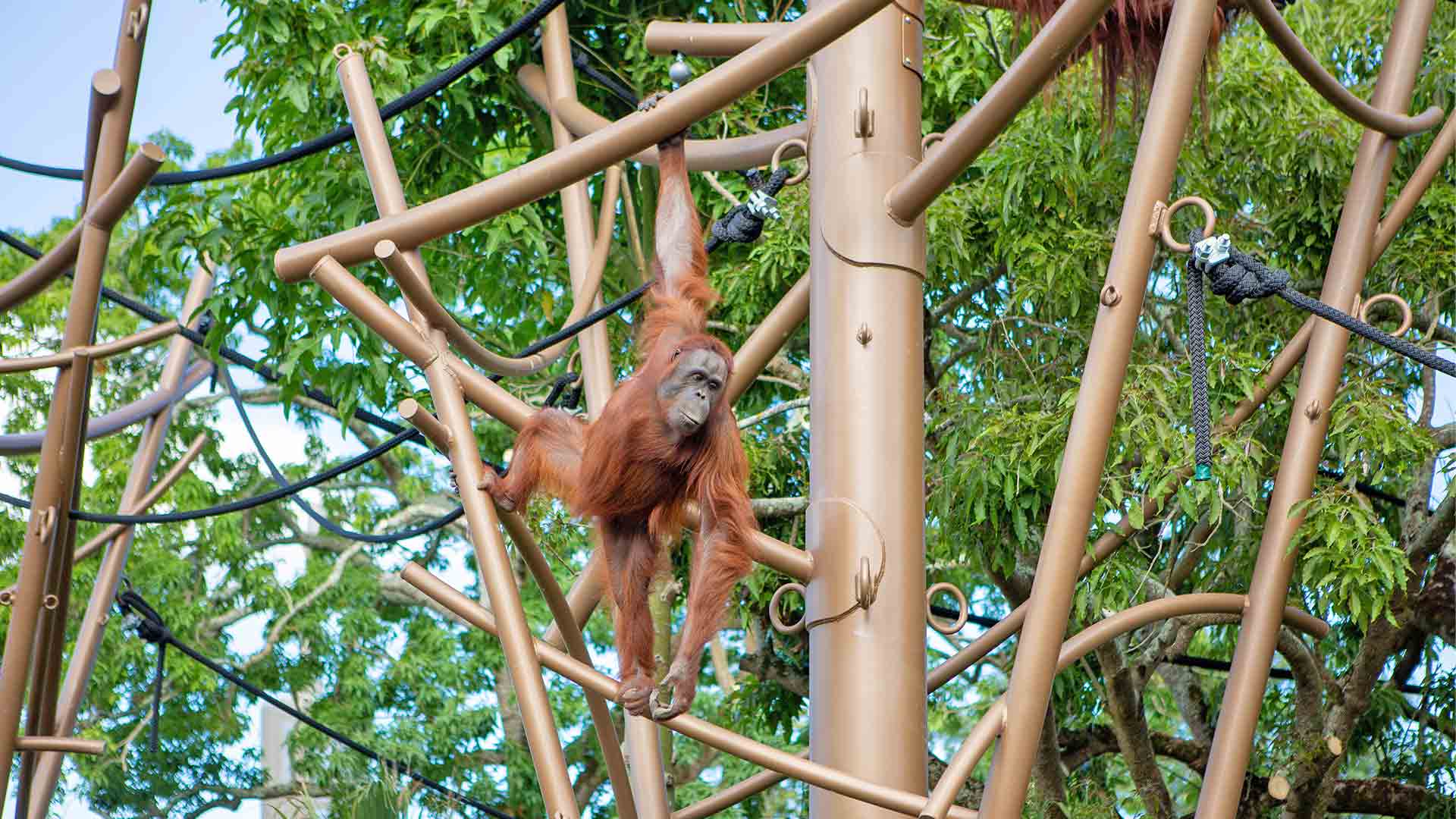 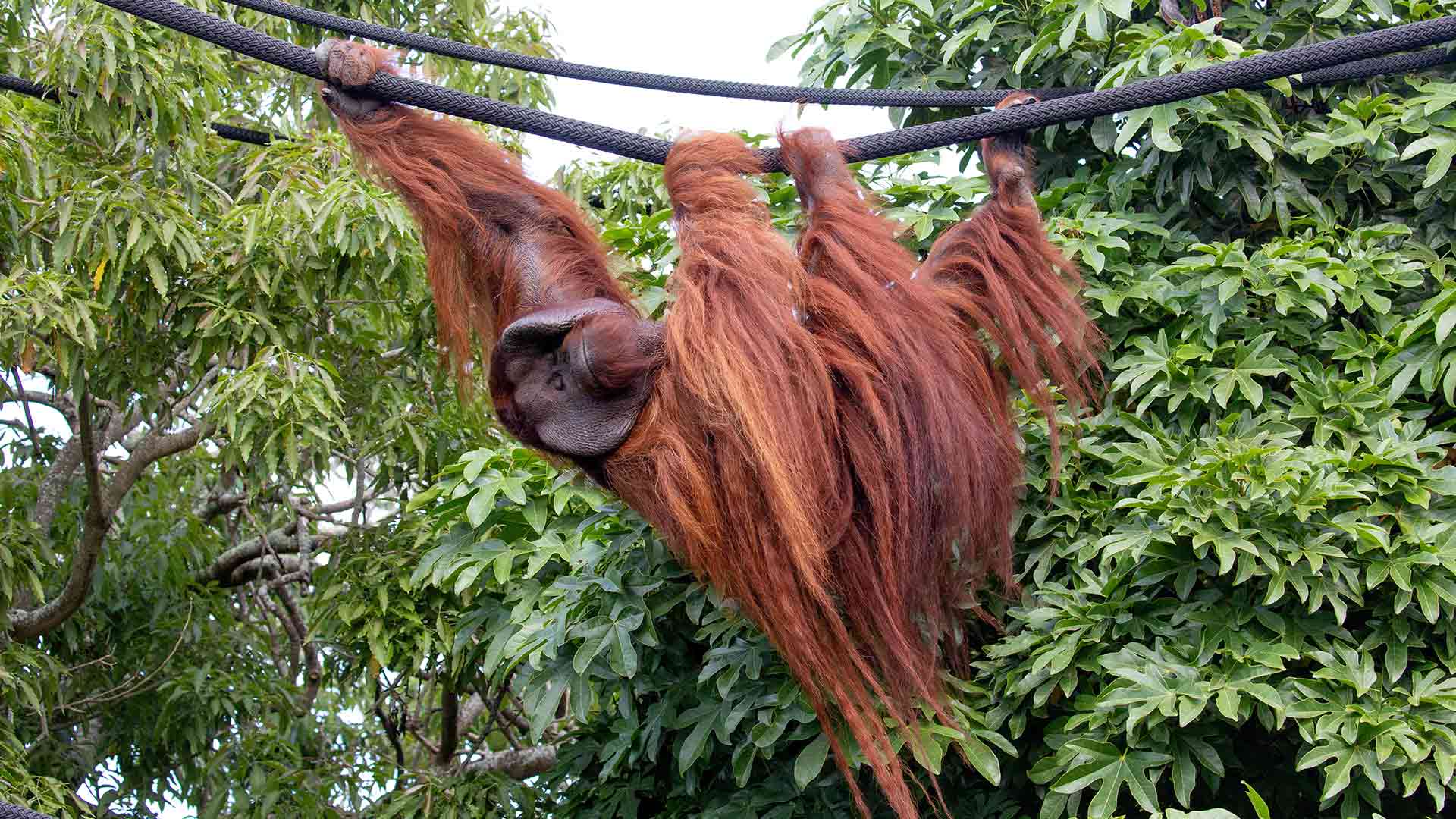 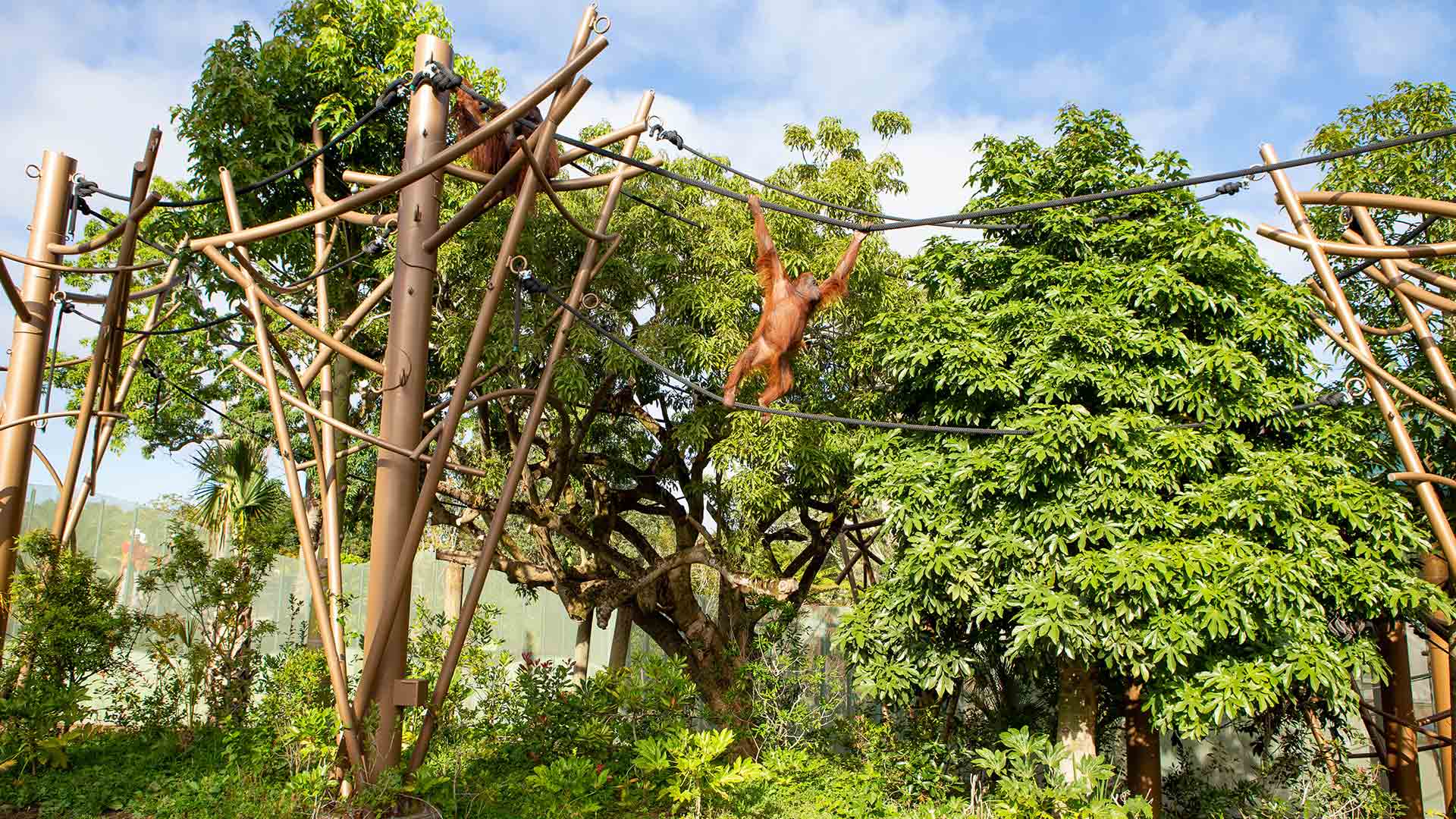 Orangutans are mainly solitary, but encounter and interact with others as they move through the forest. Our orangutan trio have been together for almost 20 years and they've built strong bonds and have a great time interacting with one another. A young orangutan will stay with its mother until it is around 8 years old - the longest period for any primate, other than humans. Infants grow and develop very slowly. For the first year, an infant will cling to its mother’s fur virtually 24 hours a day. During the second and third years, they will start to explore a bit more and learn to climb, but never more than a few metres away from the safety of their mother’s arms. In this way, they learn the many skills they need to survive in the forest, like where to find food. They develop a complex mind-map of the forest and detailed knowledge of the fruiting cycles of many species of trees. This prevents wasting valuable energy randomly searching for fruit trees.

This makes them one our closest relatives in the animal kingdom! Obvious similarities can be seen in hands, feet and faces. Orangutans also have 32 teeth and they smile and laugh, just like us - and, they're ticklish! Mild forms of being ticklish, where it just feels a little itchy, is something many animals share. It’s a behaviour that helps protect them from dangerous animals and insects. Extreme forms of being ticklish,  with uncontrollable laughing, is only shared by humans and some of our closest primate relatives, including orangutans.

Our primate keepers spend a lot of time observing and developing close relationships with the orangutans. Here are some things they have observed: 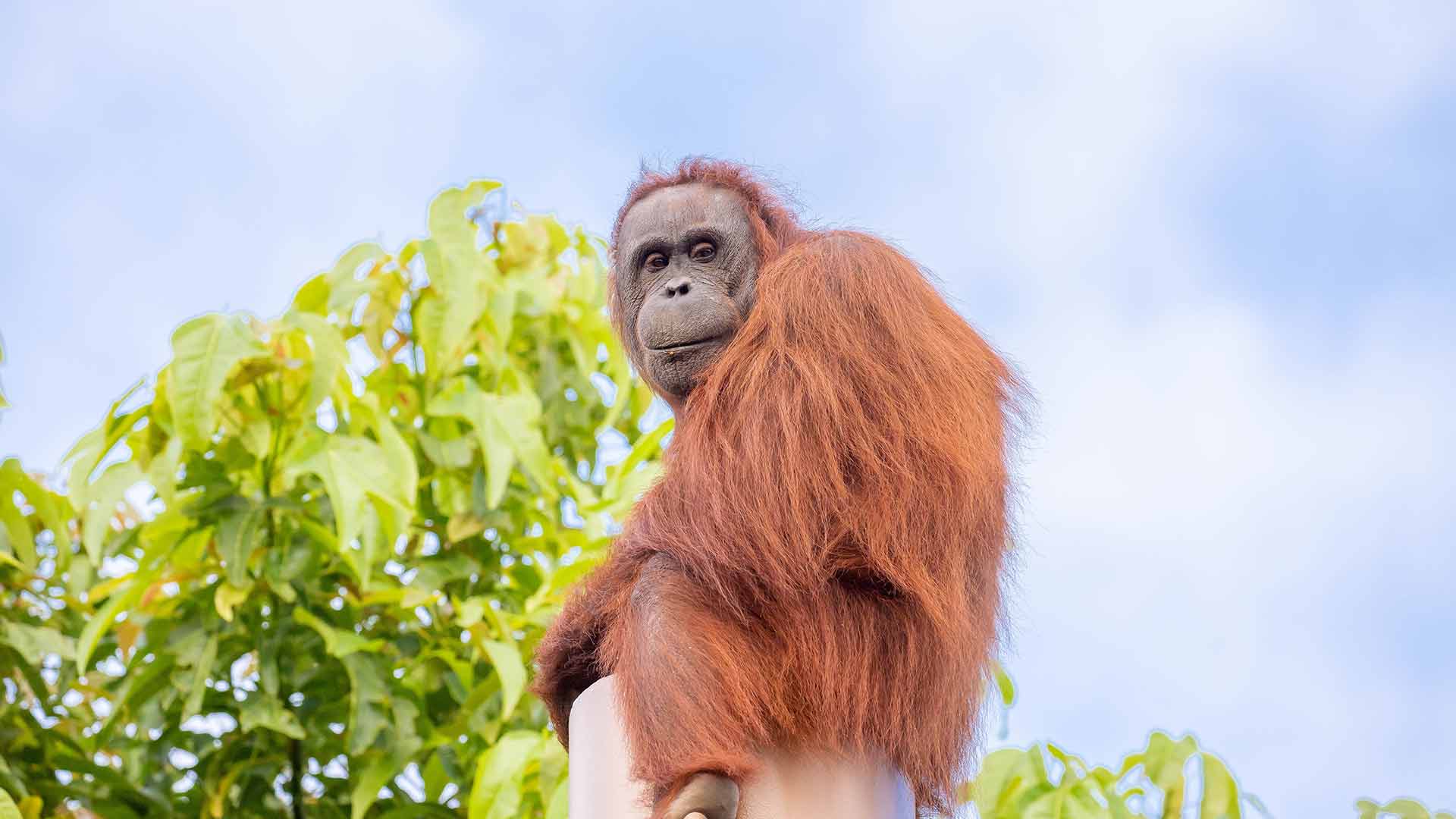 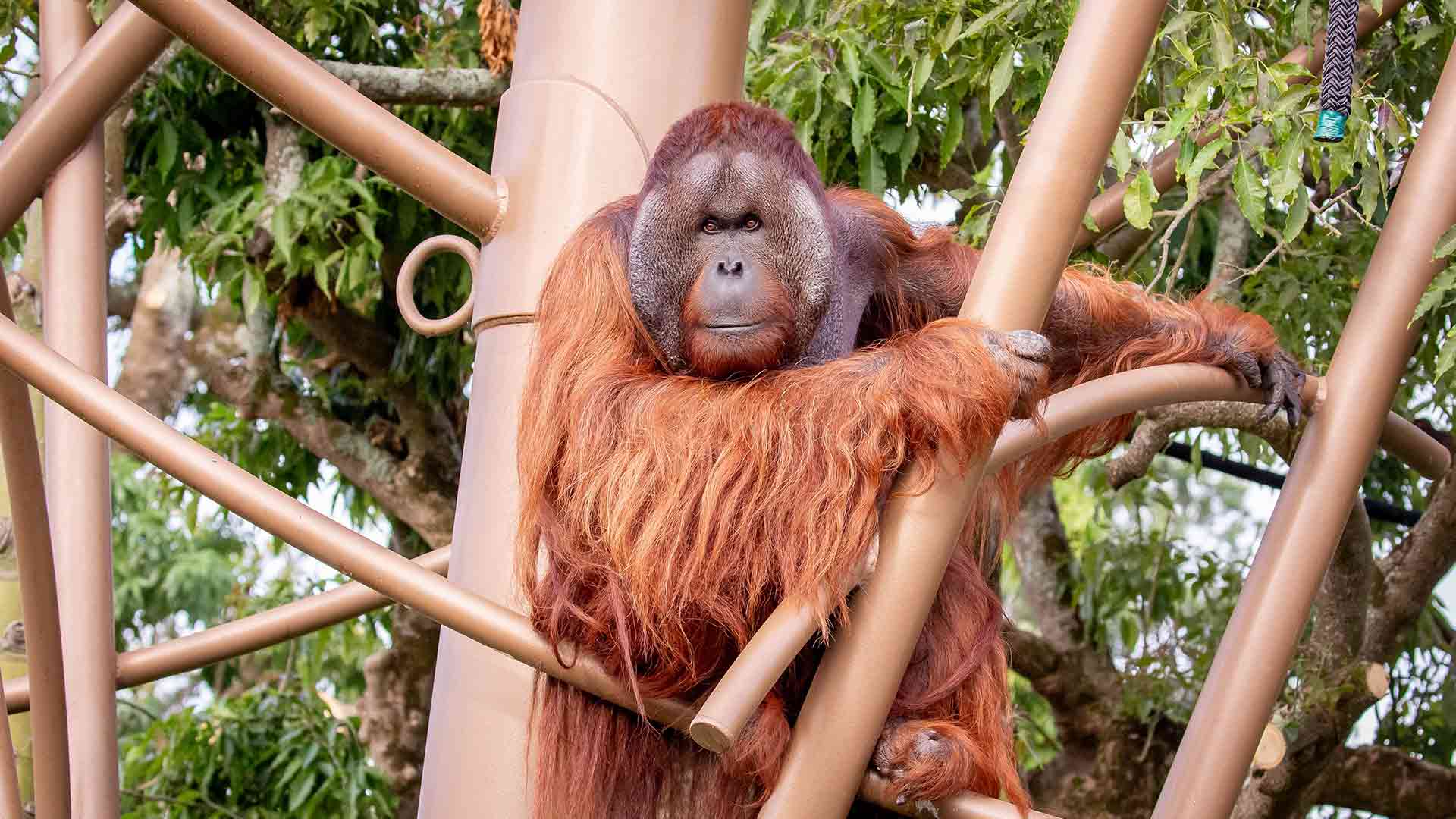 At home up high

Orangutans are arboreal and live, eat and sleep high up in the trees. We have designed their habitat at Auckland Zoo so they can move along the ropes and between the trees just like in the jungle. When visiting make sure you take the time to look up in the trees and along the high ropes to catch them in action!

Eating in the tree tops

An orangutan's diet consists primarily of fruit but also includes leaves, bark, flowers and insects. Their favourite fruit is durian. Orangutans have the most incredible memory and can identify over 400 different fruits and plants.

Here at Auckland Zoo, we care for our orangutans by feeding them a specially designed and balanced diet of fruits and vegetables.

The high-canopy habitat is designed to enable lots of choice with multiple arboreal feeders and drinkers, sheltered areas, and loads of climbing options with lots of space to roam.

Some of our keepers have worked with our orangutans for more than 20 years and they have an incredible trusting relationship. Our keepers can verbally ask the orangutans what they want and the orangutans will indicate with their hands or feet.

Like all of the animals at Auckland Zoo, our orangutans have regular vet checks. As part of their care, keepers do regular training sessions with the orangutans so that they can visually check their different body parts, take blood pressure, do hand injections, cardio ultrasounds and even voluntary x-ray!

There are 3 species of orangutan: Bornean, Sumatran and Tapanuli.

At the zoo we have Bornean orangutans. Prior to 2017, only two species of orangutan were (scientifically) recognised but research indicated those from South Tapanuli are so different they are a separate species.

Habitat: Orangutans live in tropical forests on the Indonesian island of Sumatra as well as those in Borneo. They live in the high tree canopy, travelling around mostly by what is called “quadramanous clambering” which basically means they use all four “hands” (their feet are of course just like hands) to clamber through the branches. Their thumb and big toe are short so they don’t get in the way when they move through the trees.

We've been working with the Sumatran Orangutan Conservation Programme since 2002, to rehabilitate and reintroduce orangutans back into the Sumatran rainforest. We provide training, support, new facilities, food for orangutans and vet supplies. By supporting Auckland Zoo, you’re helping us create a world where orangutans and their rainforest habitat in Sumatra are secure and thriving.

We’ve worked with the Sumatran Ranger Project since 2016. Our partnership supports a team of rangers who work with local forest edge communities of the Leuser Ecosystem to provide long term protection to the species that live there.

Why are we doing it?

Burning rainforests for palm oil plantations and illegal logging operations in Borneo and Sumatra remains the biggest threat to orangutans.

Every month rangers patrol the buffer zone of the Leuser Ecosystem on foot through at least five forest edge communities, buffer zone forest and land; deactivating and removing snares, providing community outreach and education, conducting aerial surveys with drones, responding to and helping mitigate human-wildlife conflict, reporting illegal activity and collecting wildlife and human-wildlife conflict data. The team have removed over 500 snares to date, and are the only team patrolling the Leuser Ecosystem buffer zone in North Sumatra.

As a not-for-profit, we rely on our amazing supporters like you to be able to continue our conservation Wild Work for the world’s most vulnerable and at-risk animal species. Help our wildlife in need by making a donation.

A $100 donation could fund a Sumatran Ranger for a week; letting them patrol the region, remove dangerous traps and support local communities.