Today is World Turtle Day around the globe and to showcase the true meaning of the day, SEA LIFE Kelly Tarlton's and Auckland Zoo vets have undertaken a medical check of a recently rescued, critically endangered Hawksbill turtle.

The juvenile turtle was found washed up on Northland's 90 Mile Beach at the start of May. Marine turtles don't breed on the beaches in New Zealand which means a turtle found on the beach is not well.

Following urgent medical attention from the Auckland Zoo vet centre, the hawksbill was then transported to SEA LIFE Kelly Tarlton’s rehabilitation centre where he is currently being monitored as part of a continuing partnership between the organisations.

The SEA LIFE Kelly Tarlton’s rehabilitation facility is the only facility in New Zealand that rehabilitates injured turtles and has successfully released over many turtles back to the wild.

Andrew Christie, Kelly Tarlton’s SEA LIFE Aquarium Curator, is pleased by the hawksbill’s progress so far: "While he still has a long road to recovery ahead of him, he has made an impressive turnaround in his short time at our rehabilitation centre. We’re happy to share his story on World Turtle Day - a day dedicated to the care, conservation and awareness of one of the oldest living reptiles in the world."

The Kelly Tarlton’s team has over 20 years’ experience in rescuing and rehabilitating a range of endangered or near extinct sea turtles in New Zealand. In partnership with the Department of Conservation (DOC) and Auckland Zoo, being able to help sick and injured marine life by nursing them back to good health is making a real difference to the future of these critically endangered species.

Sea turtles are one of the most affected by habitat loss, and are significantly impacted by plastic in the ocean. During his time at Auckland Zoo, the hawksbill passed plastic, which sea turtles often mistake for food in the ocean and eat. One way to make a difference is by reducing the use of plastic and disposing of it safely, which is vital for the survival of these turtles.

The hawksbill is expected to be on-site at Kelly Tarlton’s quarantine area for the next three to six months while the critical rehabilitation process is carried out. It is anticipated that he’ll be released to the public display in time for summer. 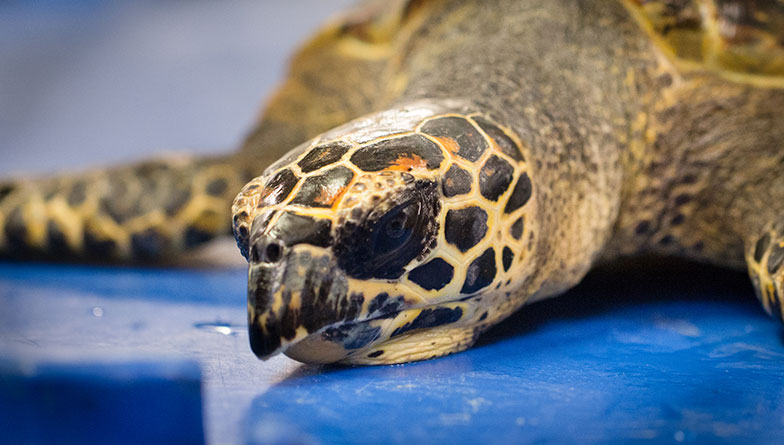 Auckland Zoo Resident Vet Lydia Uddstrom said, "the hawksbill came to us exhausted, dehydrated and not eating, with a well healed, amputated flipper. We took some x-rays to get a really good look at him and assess his flipper. We were unable to determine the cause of the injury but checked that his remaining bones were alright, which they were. It’s great to be able to provide the vet care for these endangered turtles and to work alongside the fantastic team at SEA LIFE Kelly Tarlton’s to help these ones back in to the ocean, but also help us learn more about them and how we can help them."

The stages of turtle rehabilitation

The 'Turtle Rescue Team' encourages all Kiwis to keep an eye out for distressed turtles close to shore. If you find a marine turtle on the beach the best thing to do is contact your local DOC office on 0800 DOC HOT.