Constant rain and long chilly nights trekking across the Hauraki Gulf island couldn't dampen the spirits of Ectotherms team leader Don, who with Interpretation coordinator Kavi was ecstatic to be celebrating a lot more than releasing these wētā to a safe home in the wild.

"This latest release, part of our wētā punga breed-for-release programme, was to bolster the first population we introduced here in June 2016. So Kavi and I also had some detective work to do – searching the island for evidence that last year's wētā punga have made it to adulthood," says Don.

"It took 30 intense hours over three nights, but we did it! We found two adult male wētā punga in great breeding condition, proof that these stunning animals are thriving and likely breeding. Tracking cards we put out across the island also seemed to capture adult foo tprints. This is the ultimate result and such an incredible thrill! Looking at just one of these animals tracking around in the forest represents such a long journey and so much hard work by so many people to get to this point. That's what’s so awesome."

I felt extremely fortunate to experience a part of Auckland’s natural heritage that most of us never get to see. These islands, just on our doorstep, are a glimpse at what Aotearoa once was, and hopefully could be again if we continue to invest in making conservation a priority 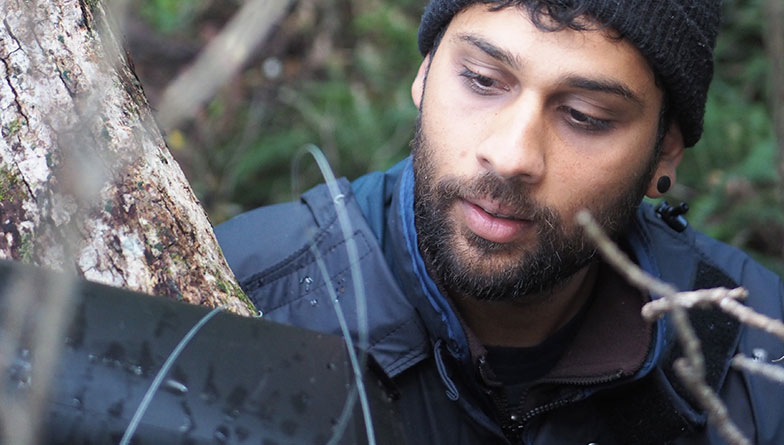 For Kavi, whose day job is all about coming up with ways to engage visitors about the Zoo's animals and projects like the wētā punga programme, getting stuck into fieldwork was a great change of pace and a great reminder of why he does what he does.

"Between the constant rain, mud and long nights spent scanning the trees for nocturnal wētā punga, it was definitely not a holiday, but I came away recharged and with a renewed appreciation for our wildlife, and the amazing work our teams are doing every day," says Kavi.