How do you learn more about a recently discovered species when you don’t know where it lives? For a team of conservationists in Auckland with a shared passion for reptiles, finding the answer to this question is all part of a dedicated plan centred on the small and elusive Muriwai gecko.

The Muriwai gecko was first spotted in 1954 but was only recently recognised as a new species and is yet to be scientifically described. An ornithologist (a bird expert) who was working on a tiny island off Auckland’s west coast saw a couple of geckos under a rock. According to lizard expert Dylan van Winkel, the observation was reported but not followed up. Then in 2003 a gecko was found dead in the dunes on the mainland nearby and the specimen was incorrectly tagged as Woodworthia maculata (the widespread Raukawa/common gecko) at Auckland Museum. In 2010, Auckland Council staff went out to the same island for routine biosecurity work and found some more live specimens. They took photographs and sent them to Dylan for identification.

“The geckos resembled Raukawa geckos but there was something different about them. In 2016, I went out to the island myself to examine the geckos and confirmed that they were indeed different from the common Raukawa gecko,” explains Dylan. “I then went out to the dunes and found a few individuals out there too which looked like the same species. After we got their DNA sequenced, we found that it was a new species of gecko!”.

It was this discovery that has since prompted an extensive project conducted by Dylan, Auckland Council and other wildlife experts, including ectotherm keepers from Auckland Zoo.

The Muriwai gecko is a small gecko from Auckland’s west coast (hence the name!). Presently, the species is known from only three isolated locations, including the island, and two coastal locations between the Kaipara and Manukau harbours. It is one of eight endemic lizards assigned a conservation threat status of ‘Nationally Critical’ which means there are fewer than 200 individuals known. 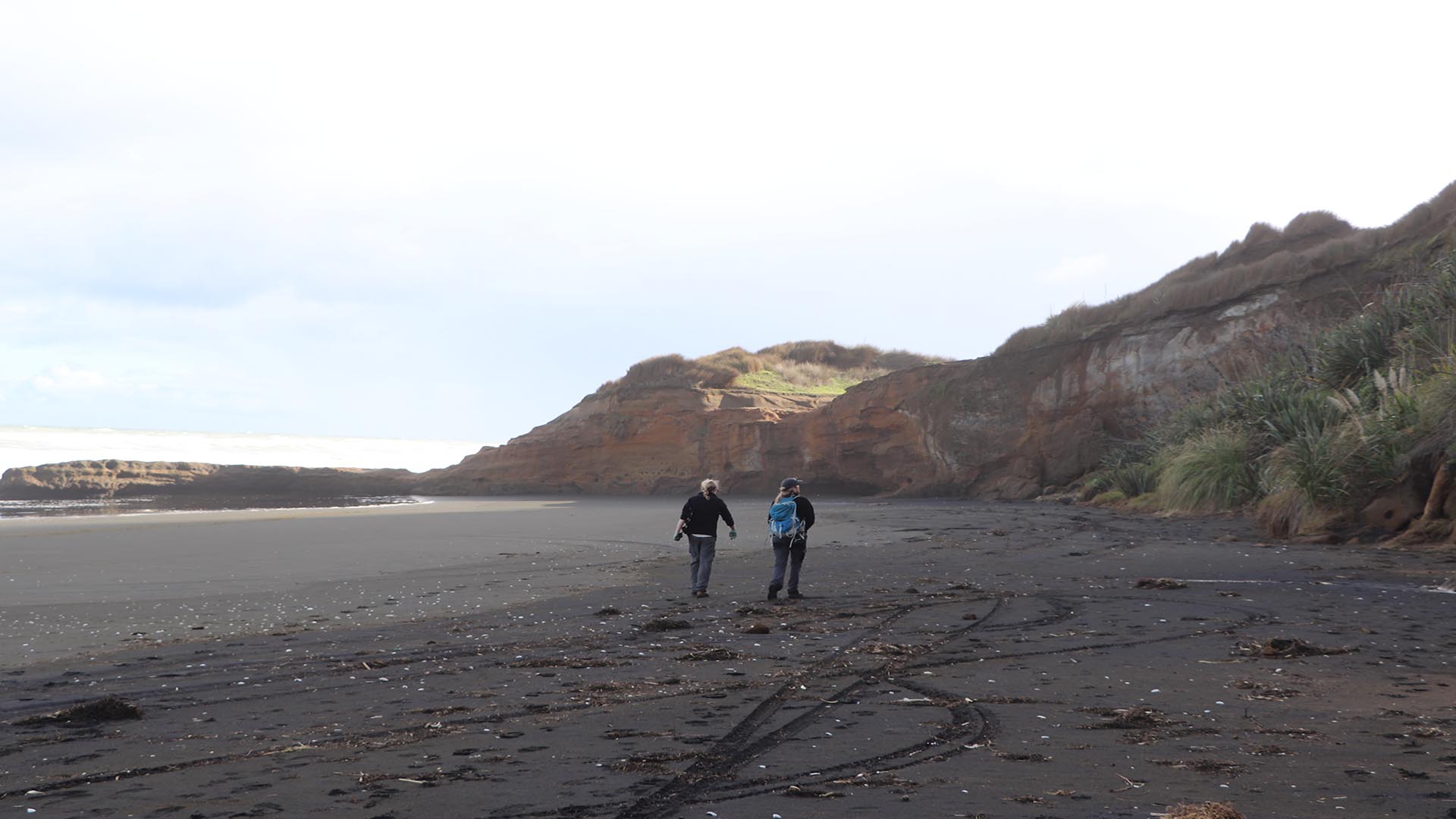 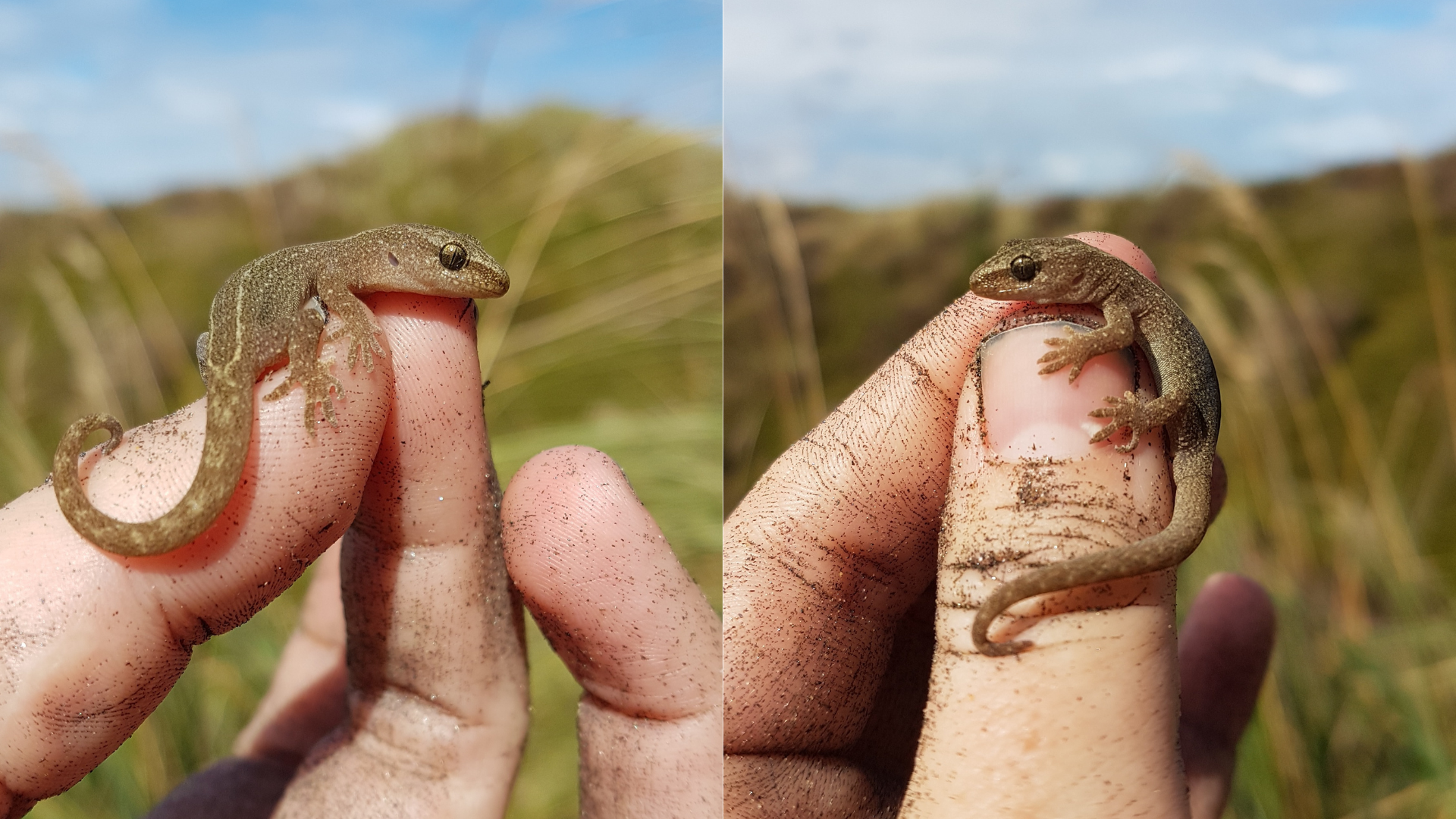 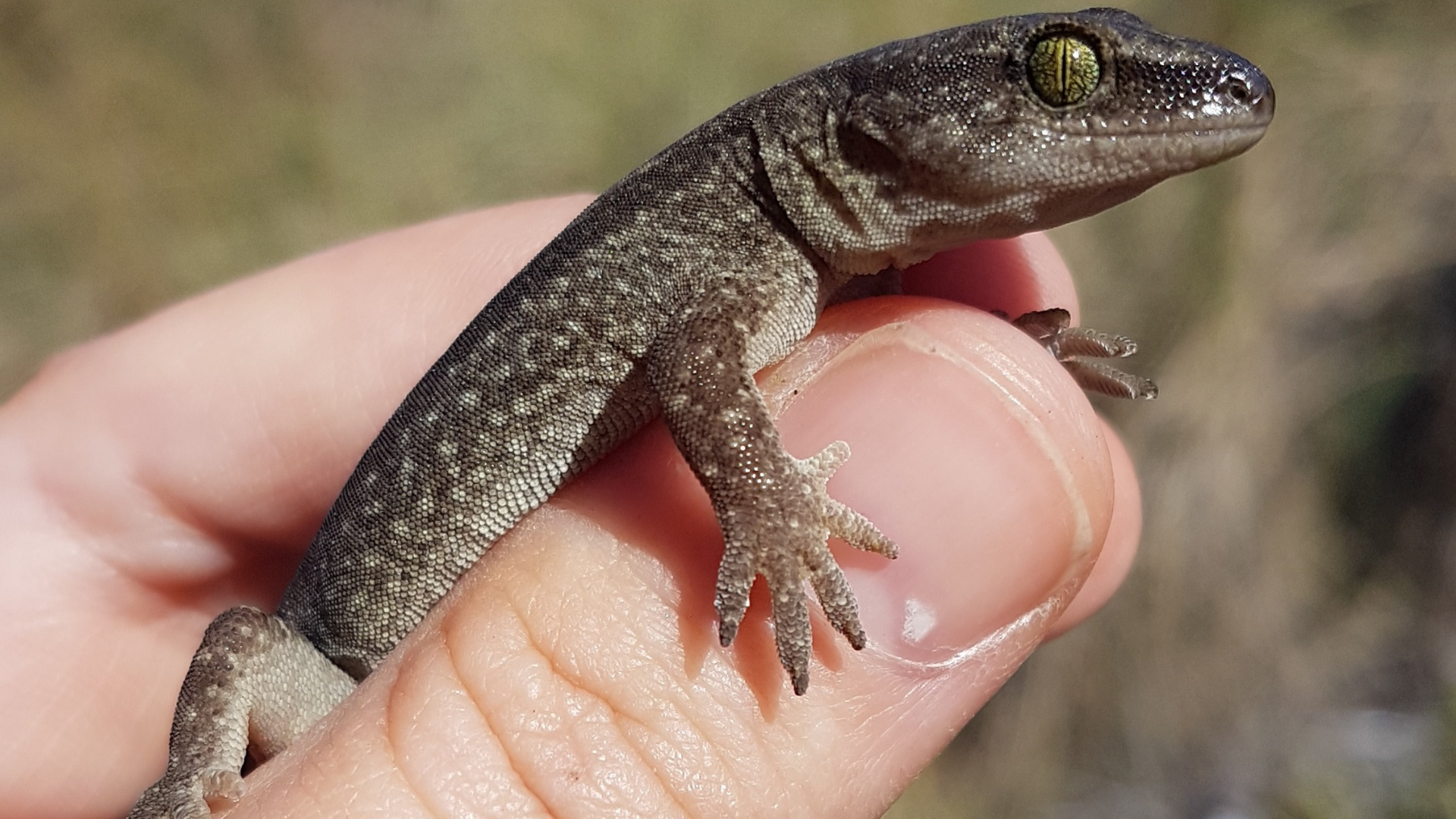 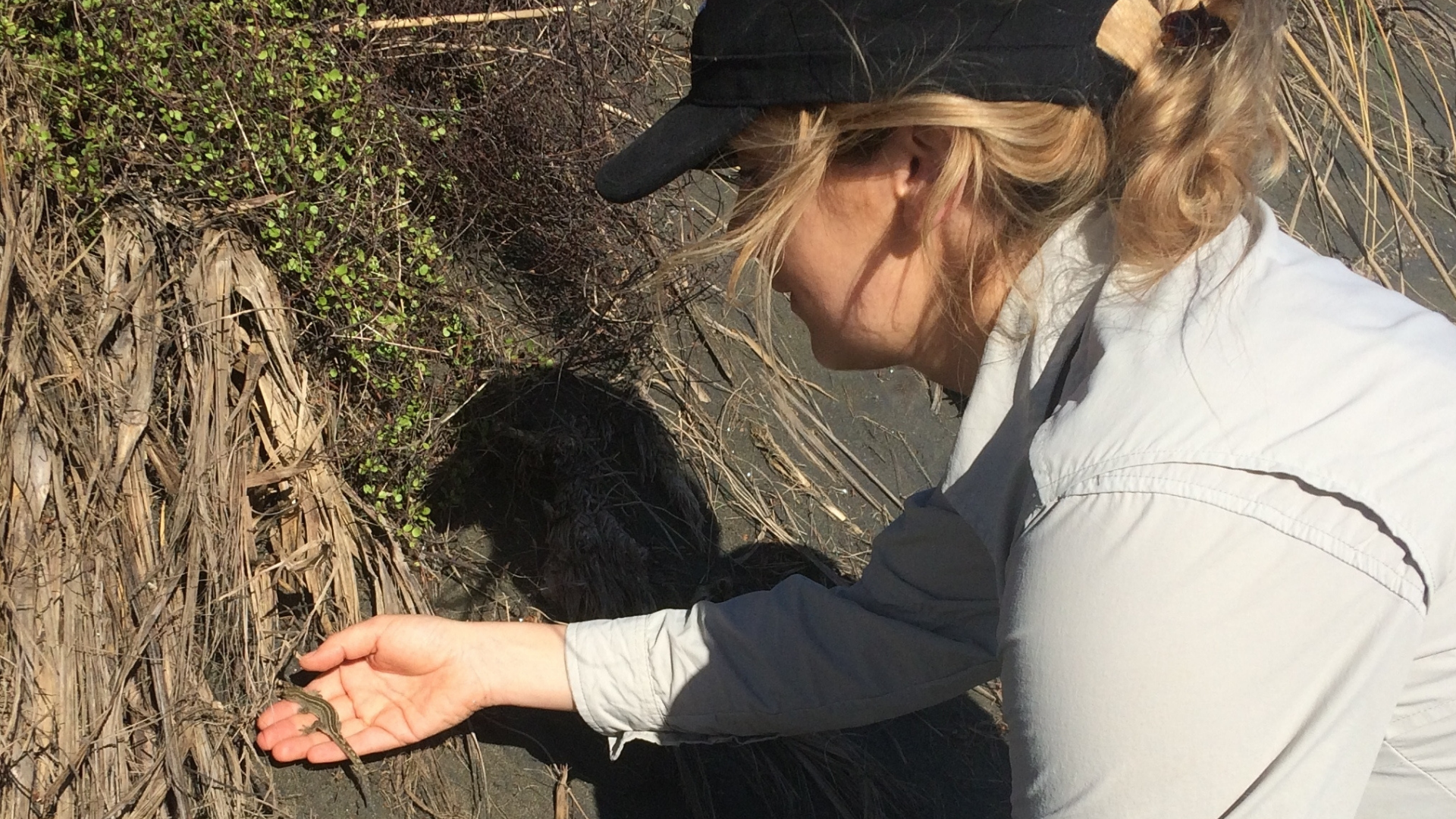 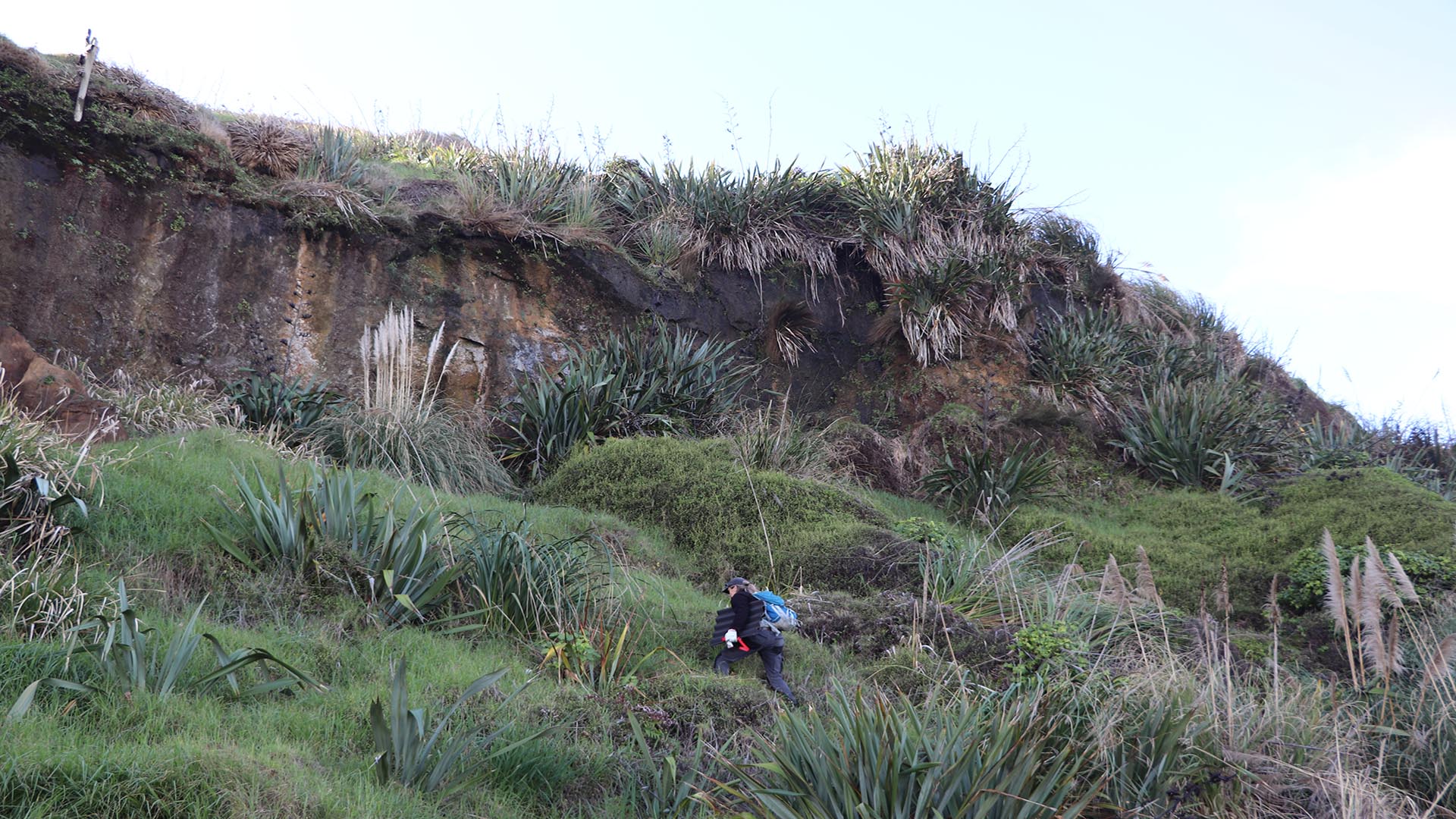 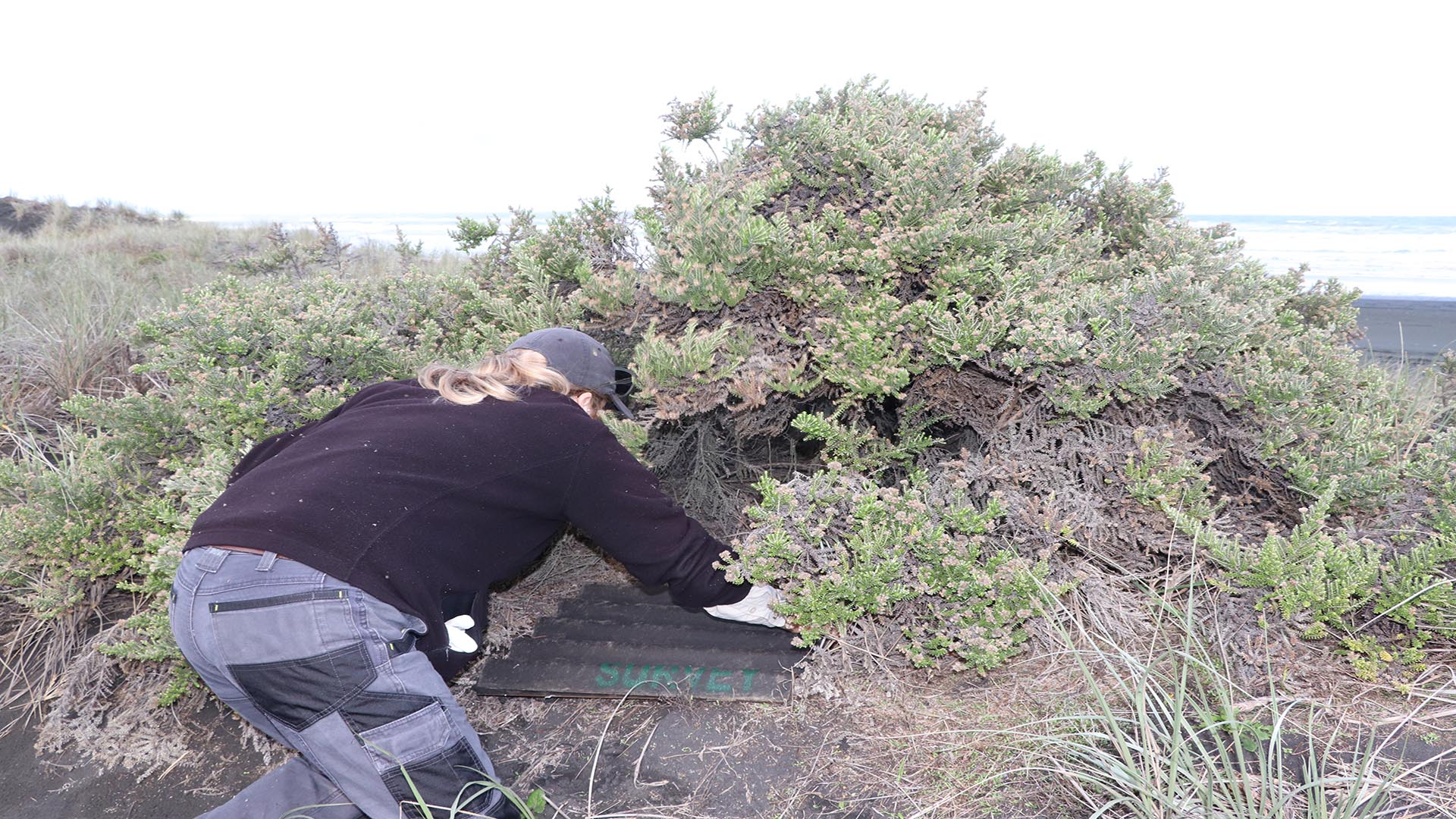 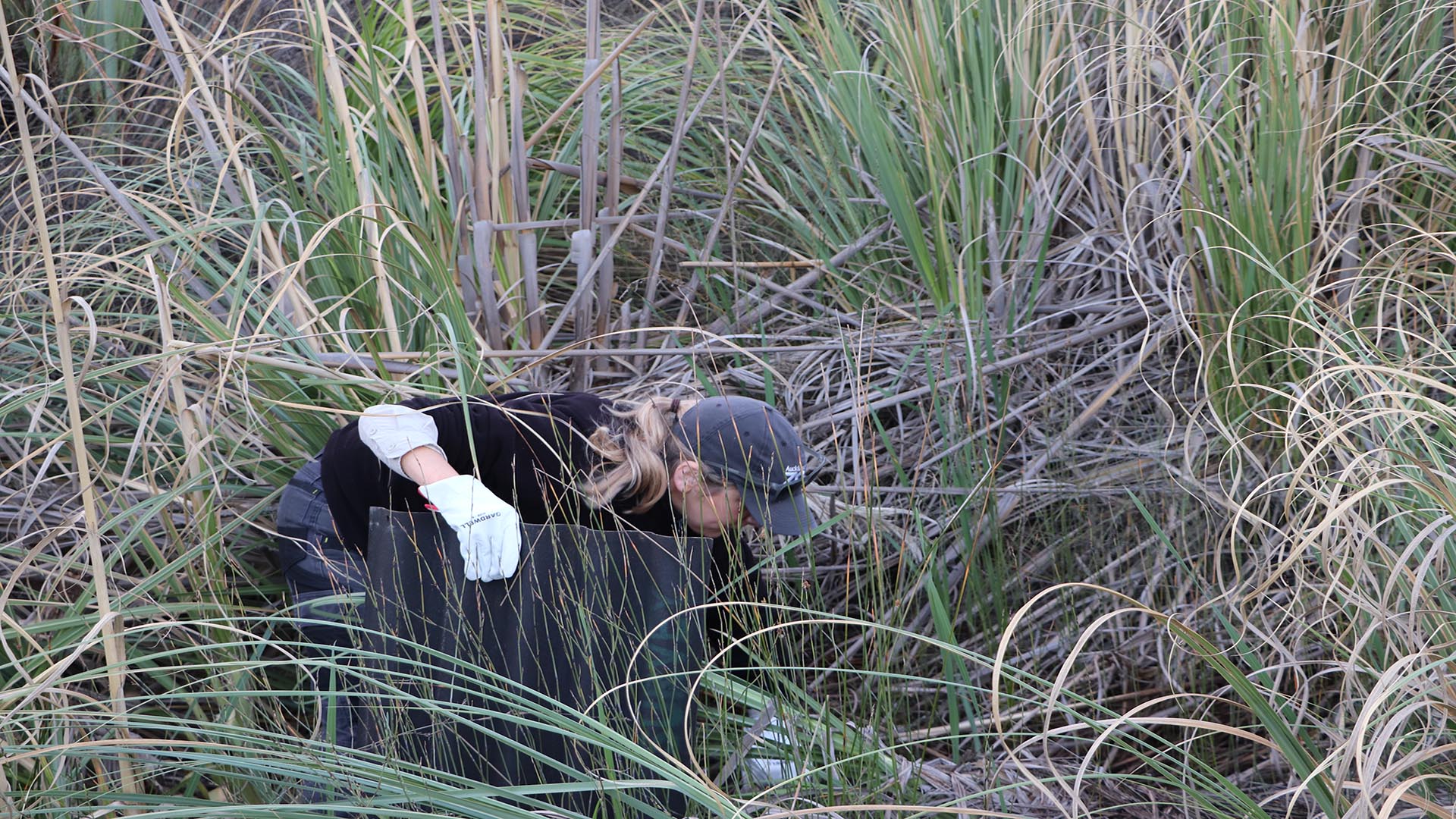 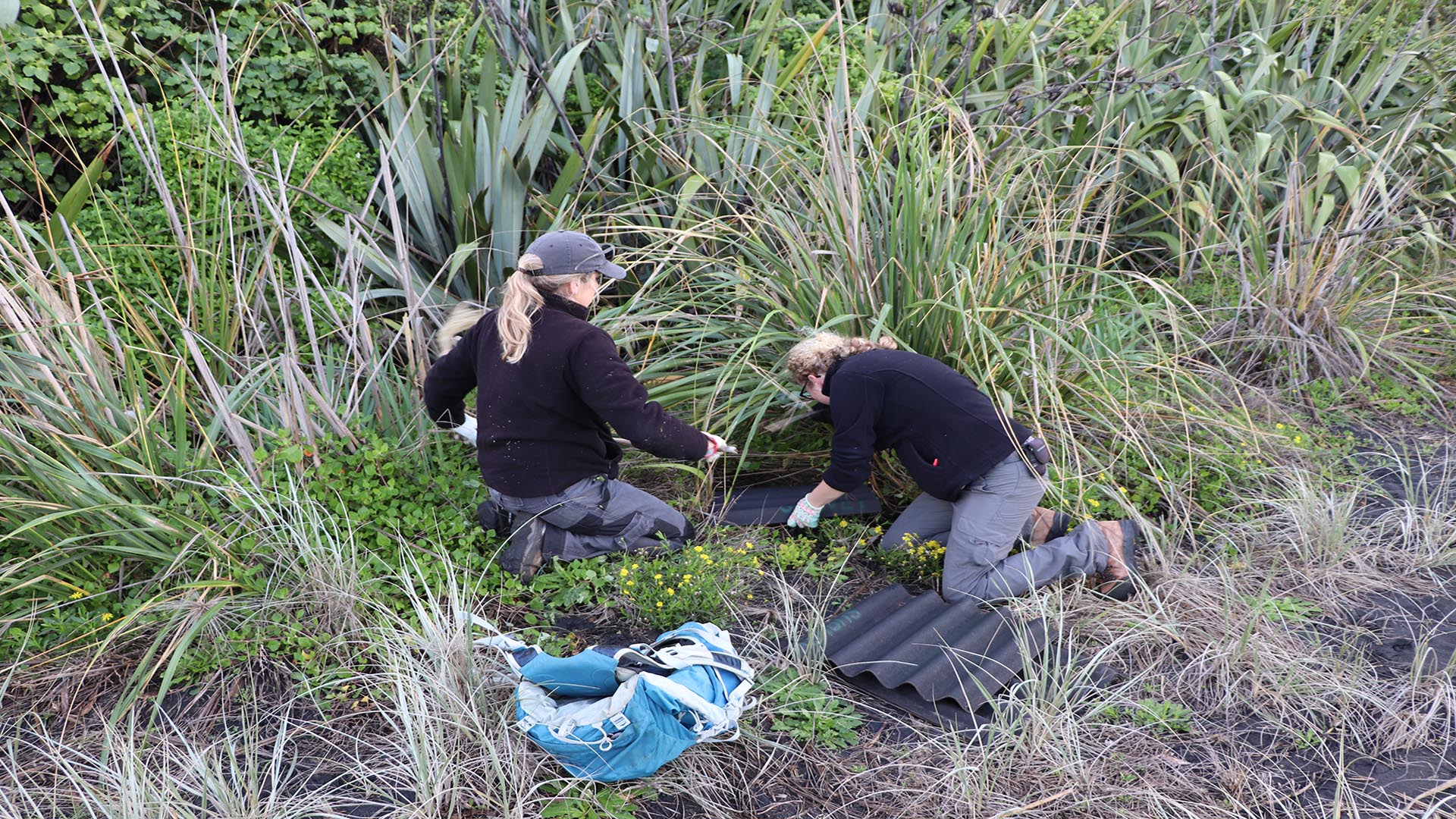 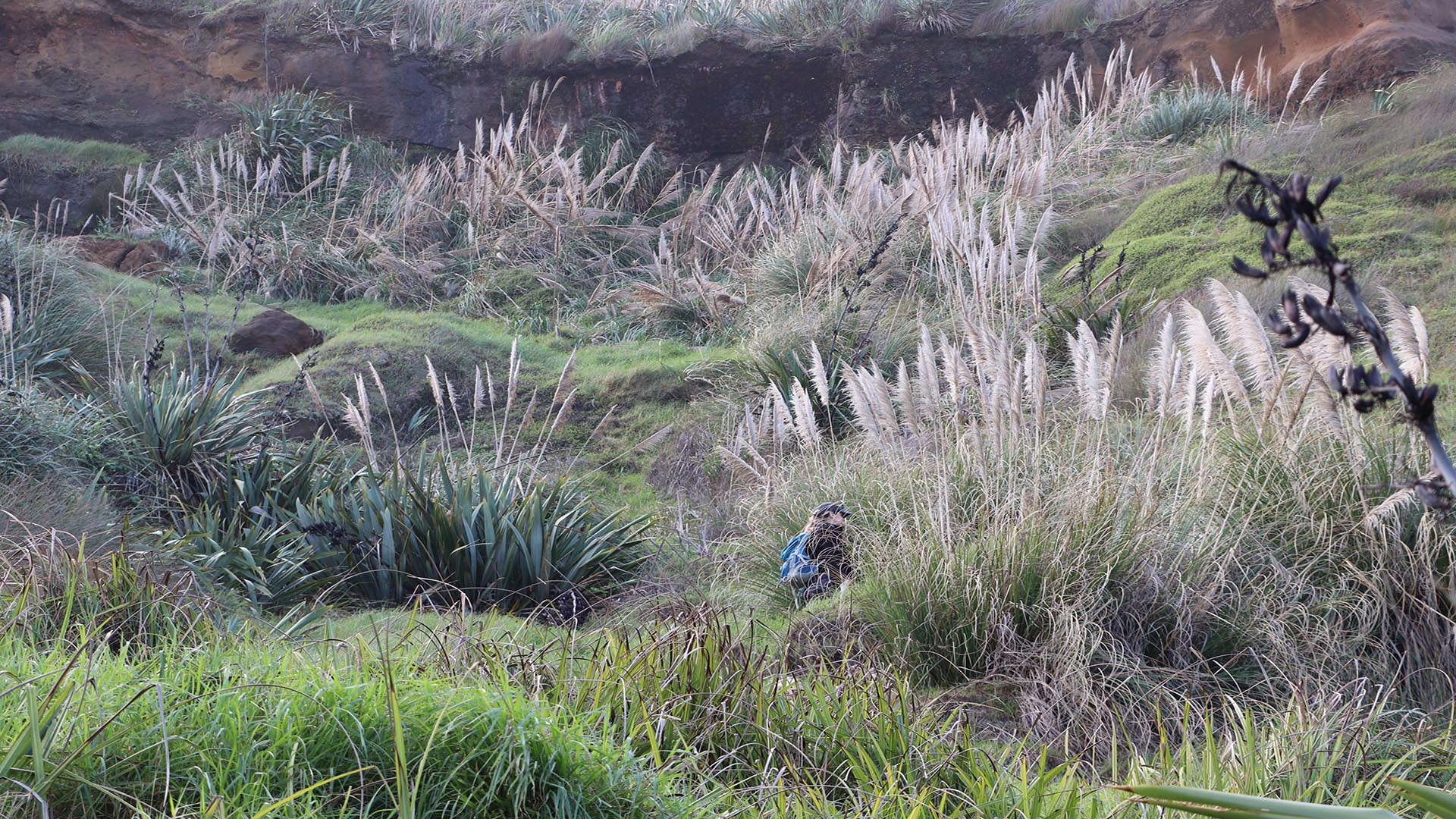 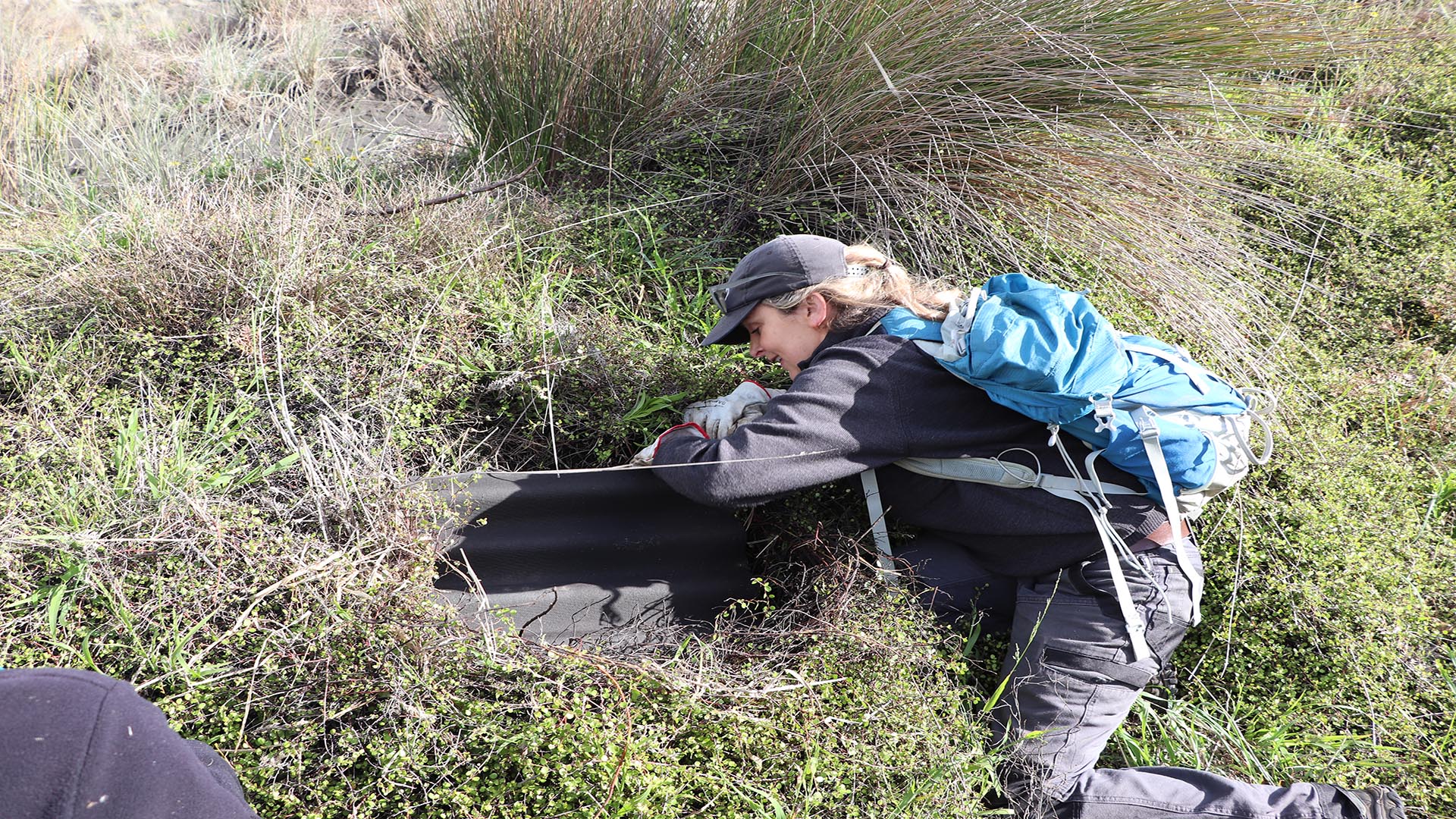 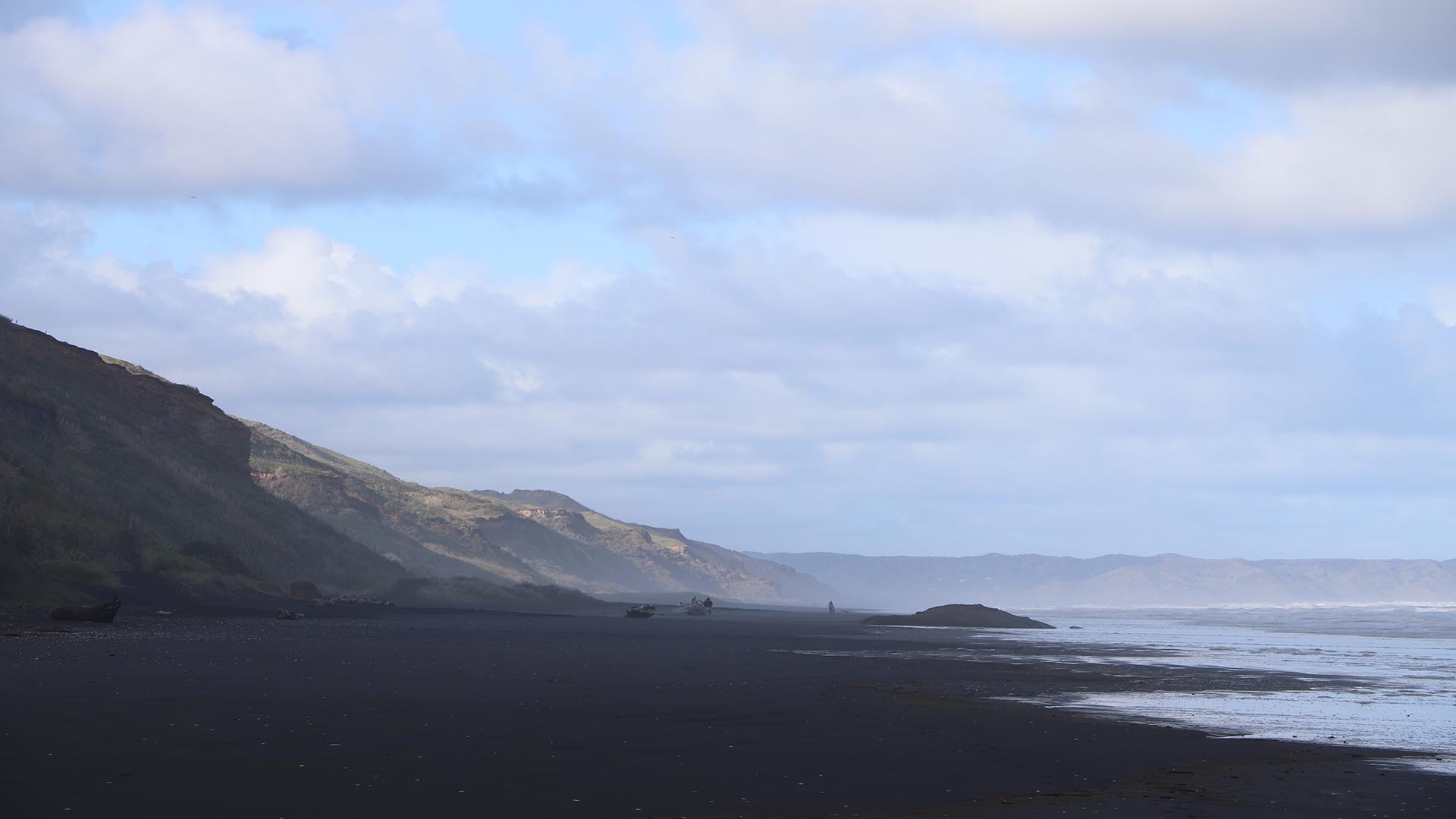 Recognising the clear lack of knowledge on this threatened species, Auckland Council commissioned a targeted survey for the Muriwai gecko to gain a better understanding of its local distribution and established a monitoring programme to inform conservation objectives. Complementing this work, Auckland Zoo is undertaking to search for the gecko further afield to try and understand its wider distribution and status.

Since 2016, herpetologists have actively searched an array of potentially suitable habitats for Muriwai geckos to better understand their range and population. Very few geckos have been found. Despite the low gecko head count, these surveys were crucial in providing more information about the gecko’s habitat choices and therefore where other Muriwai geckos might survive - thereby directing the wider survey programme that Auckland Zoo ectotherm keepers have implemented. Senior keeper Ruth Smith and other members of the ectotherm team have been heading out to survey various locations north and south of the harbours bordering the gecko’s current known locations.

In June, Ruth and a small team of volunteers headed out to the windswept west-coast beach south of the Manukau. It’s theoretically a Muriwai gecko’s dream home location, with ideal habitat combining dense native wild dune grasses, surrounded by low lying fruit-producing native vegetation such as pohuehue (Muehlenbeckia). The survey sites are all recorded with a GPS and marked with a piece of flagging tape to help the team find the exact locations when they visit again months later.

The survey work is just the start of a five-year monitoring plan for the Muriwai gecko. Working according to a DOC Wildlife Act permit, teams will go out twice a year to check the sites for geckos and any found will be carefully captured, measure, weigh and determine the sex of the individual before recording their findings. They will then take photographs of each gecko and make a small temporary mark on its body (using a non-toxic pen). This is all part of a mark-recapture method which is commonly used to estimate population size and monitor trends over a specific period.

The geckos resembled Raukawa geckos but there was something different about them. In 2016, I went out to the dunes and found a few individuals out there too which looked like the same species. After we got their DNA sequenced, we found that it was a new species of gecko!

Ruth and the team understand that despite the amount of effort they’re putting in the chance of reward is relatively slim. However, if the reward is forthcoming and Muriwai geckos are discovered in the three new areas the zoo is surveying, then it’s a huge deal for the species. It would mean that their range is much larger than we currently know and would raise the possibility of more geckos in the areas between survey sites. And for a species currently listed as ‘nationally critical’, any signs that its distribution and numbers are greater than anticipated would be fantastic.

What we learn over the course of the survey period will be used to inform and deliver relevant conservation actions, which might include intensive predator control, predator-exclusion fences or even a recovery breeding programme at Auckland Zoo. Already it’s clear however, that time is of the essence and that their fragile coastal habitat is under great threat. Invasive weeds are encroaching, signs of mammal predators are everywhere and, compounding it all, damage to the delicate dunes from off-road vehicles and camping/campfires is all too common. So while the team of conservationists is doing everything they can to understand and direct resources to save this tiny and elusive gecko, its up to everyone who visits the west coast to help when and where they can by staying out of the dunes, keeping to paths where they need to cross them, not camping or having fires outside of designated camping areas and most importantly, not driving in the dunes.

If we all work together, we might just save this special little Auckland endemic. If you'd like to help us continue the work we do for native wildlife all around Aotearoa, you can do so here.

Helping to bring the cobble skink back from the brink