This #WildWork Wednesday during Whio Awareness Month, we want to take the opportunity to do just that – raise awareness of our unique, nationally-vulnerable blue duck – the whio. We’ve invited Auckland Zoo Bird Keeper Sarah Anderson, experienced in both the husbandry and breed for release programmes of these special New Zealand ducks, to share her experience and tell us what makes these ducks so special.

When I hear visitors saying “they are just ducks!” while watching our whio and pāteke in their gorgeous landscaped aviaries, I am very quick to explain just how special they are – both species are endemic New Zealand waterfowl and are real icons of our unique fauna. Our beautiful whio is such a unique duck, and has even been given pride of place on our ten-dollar note. While pāteke foraging on estuaries and beaches seems so bizarre to me – but what an awesome sight!

Auckland Zoo has been lucky enough to have whio and pāteke since the late 1990’s and has always been involved in the Department of Conservation recovery plans for each species. Unique to Aotearoa, whio are even rarer than some species of kiwi and need all the help they can get. Every healthy whio duck hatched at Auckland Zoo is part of a breed and release programme – where they eventually get sent to a duckling ‘boot-camp’, where they build up their muscles before being released to a pristine fast-flowing river. 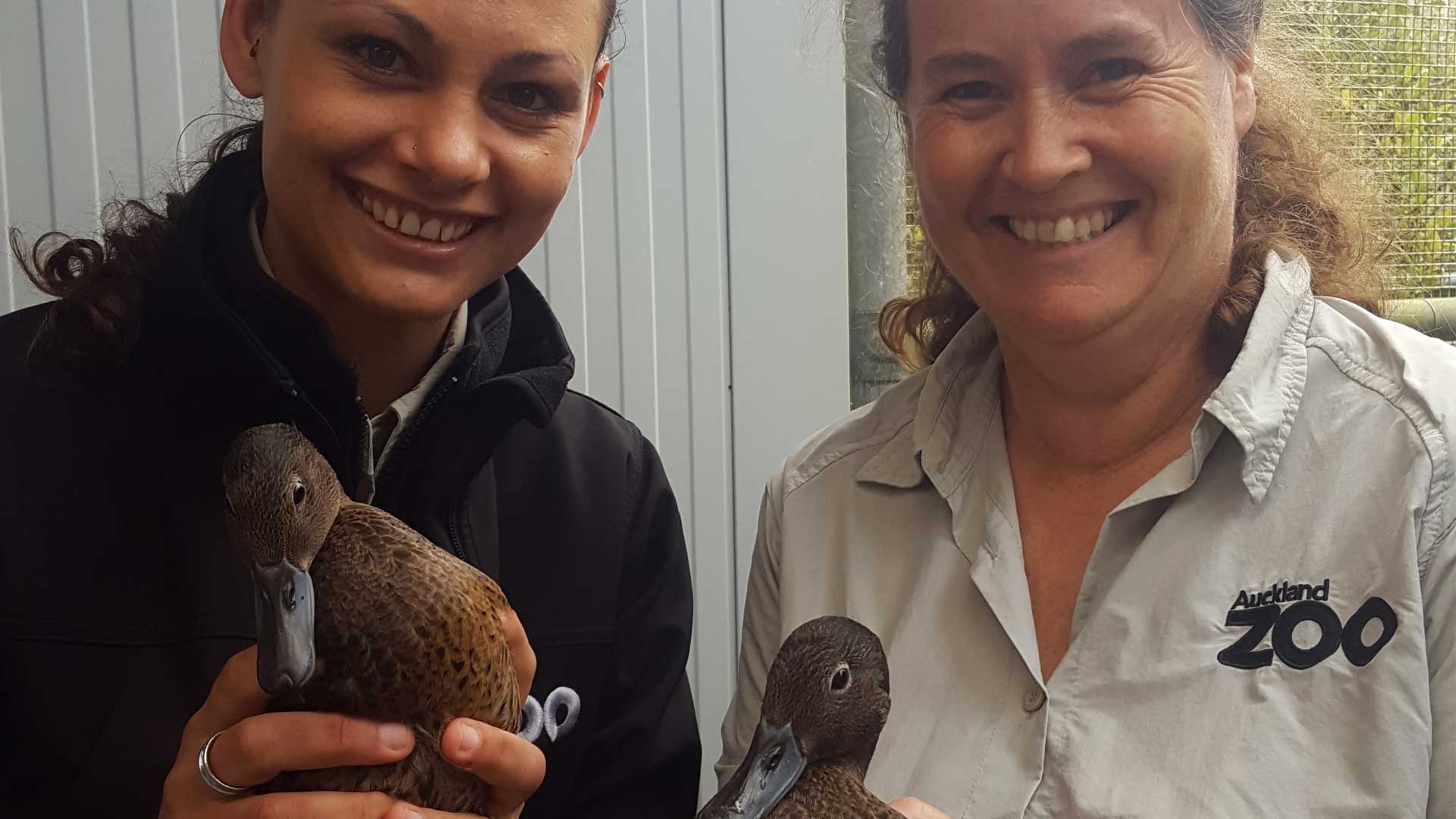 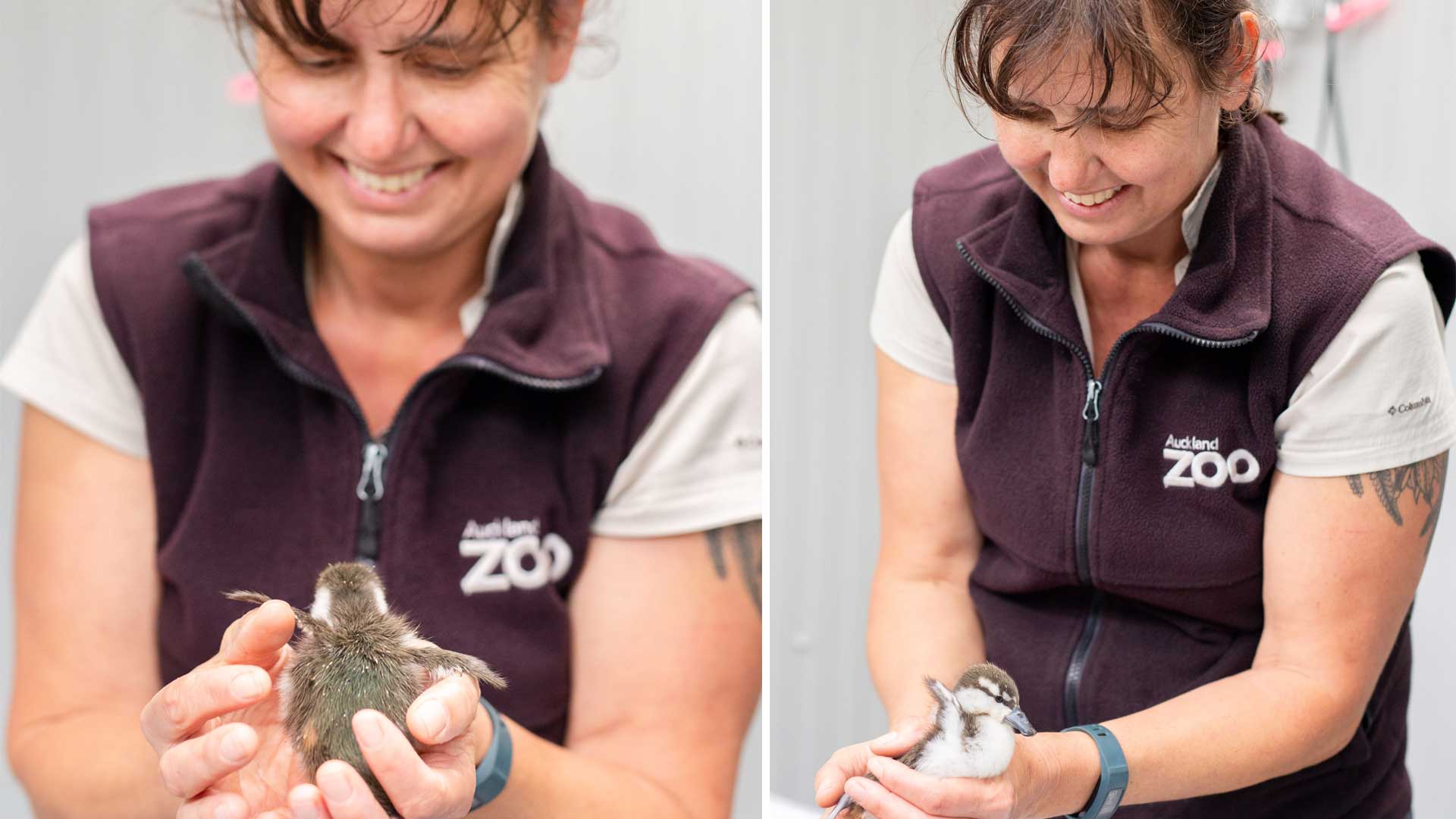 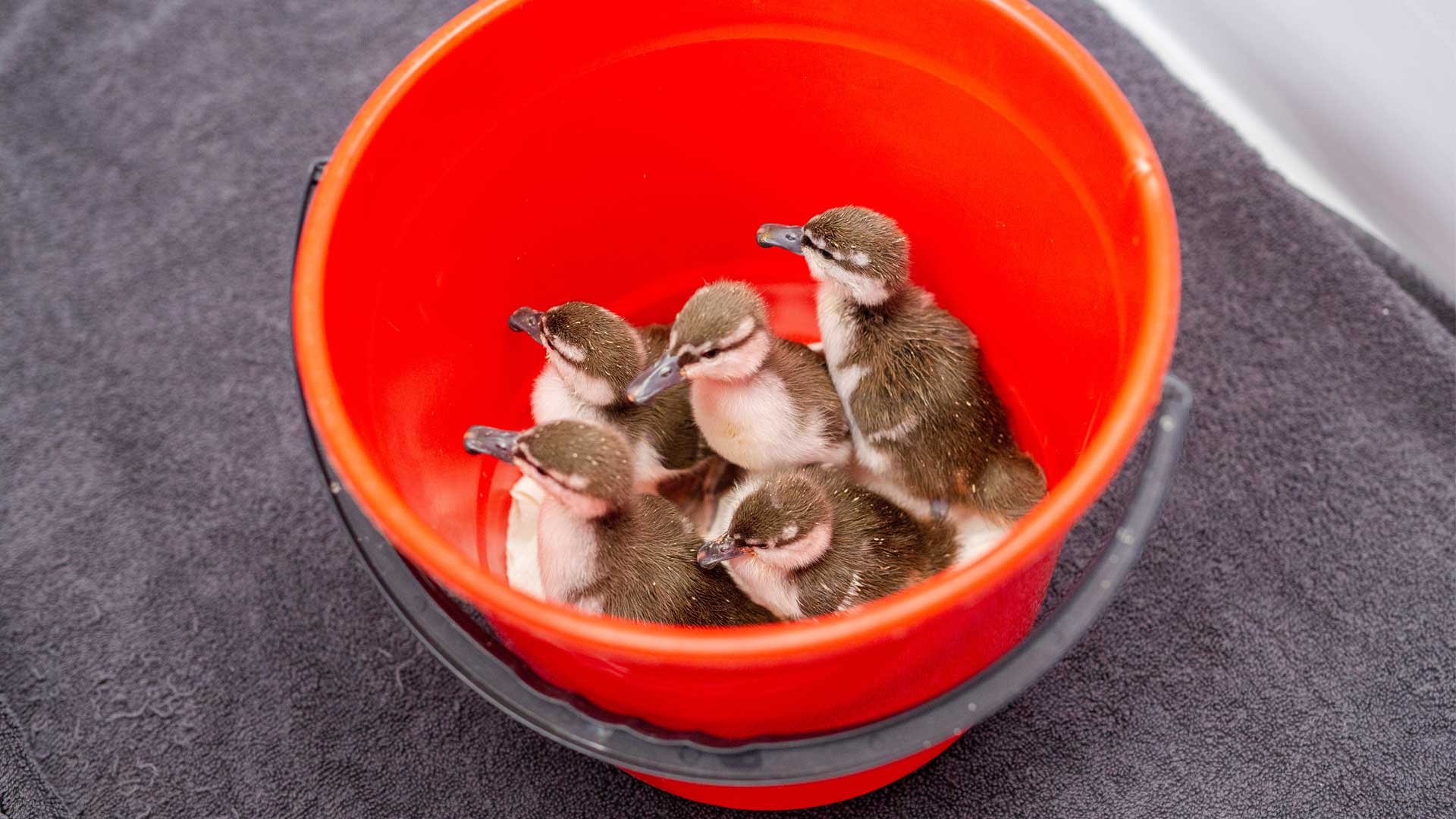 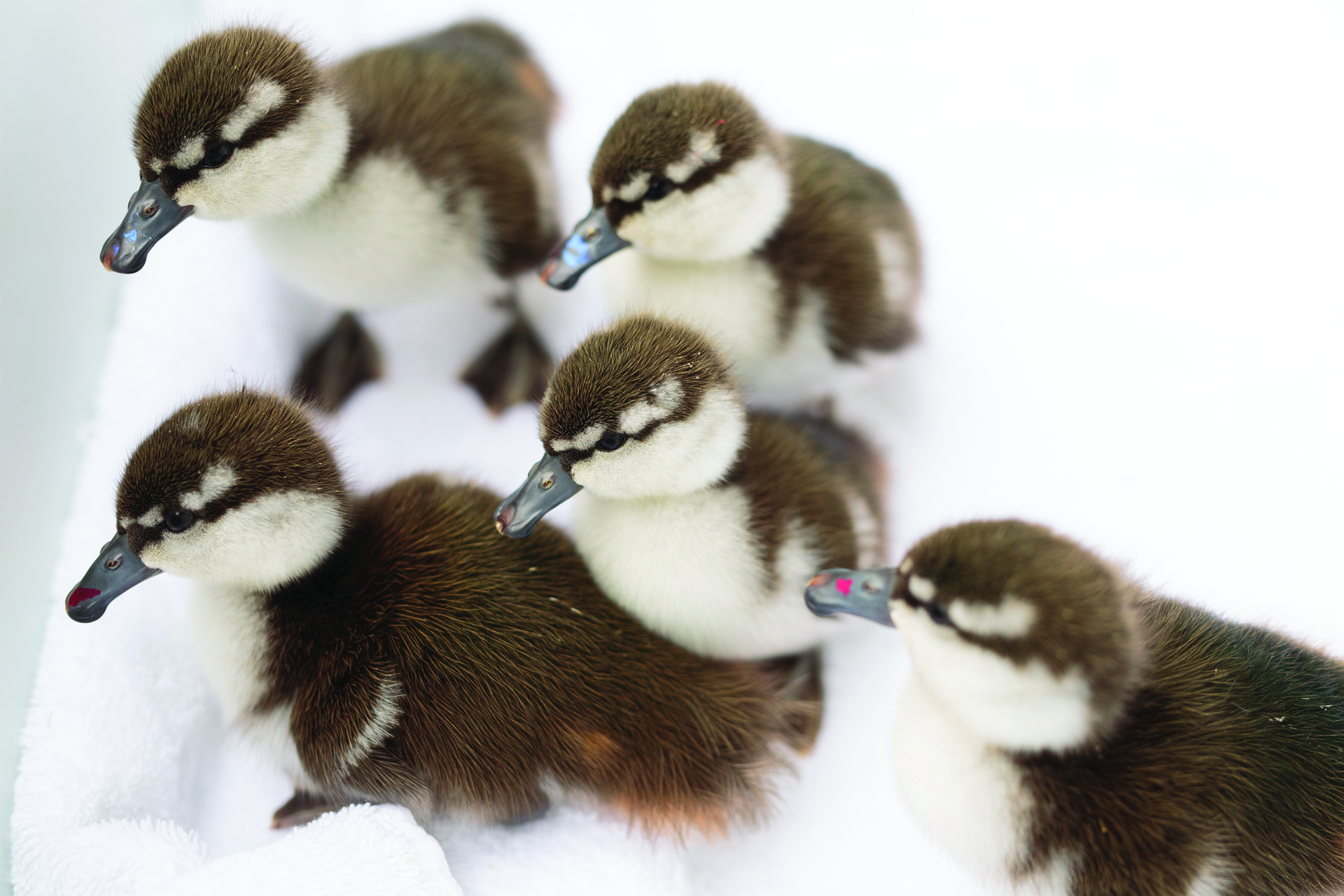 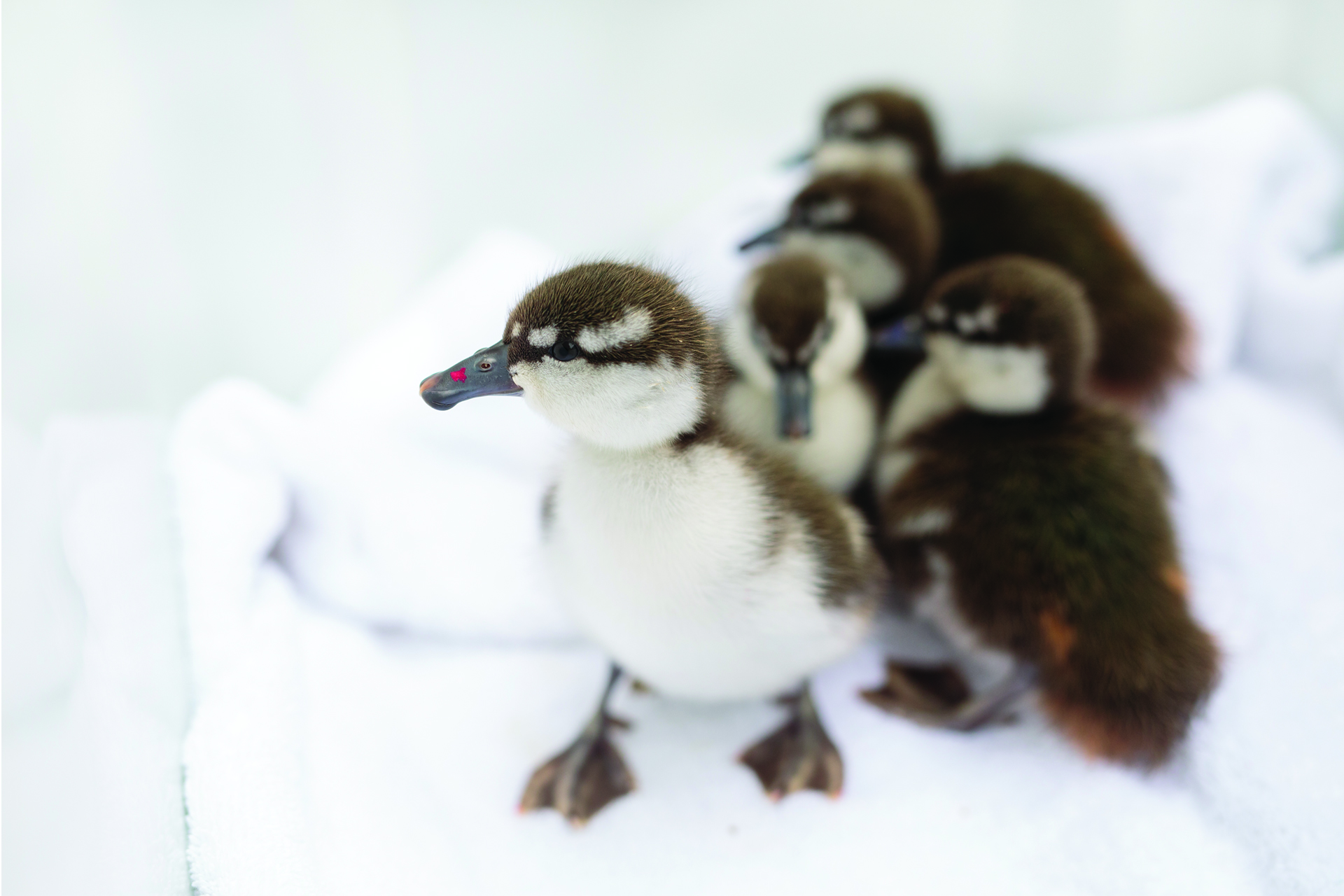 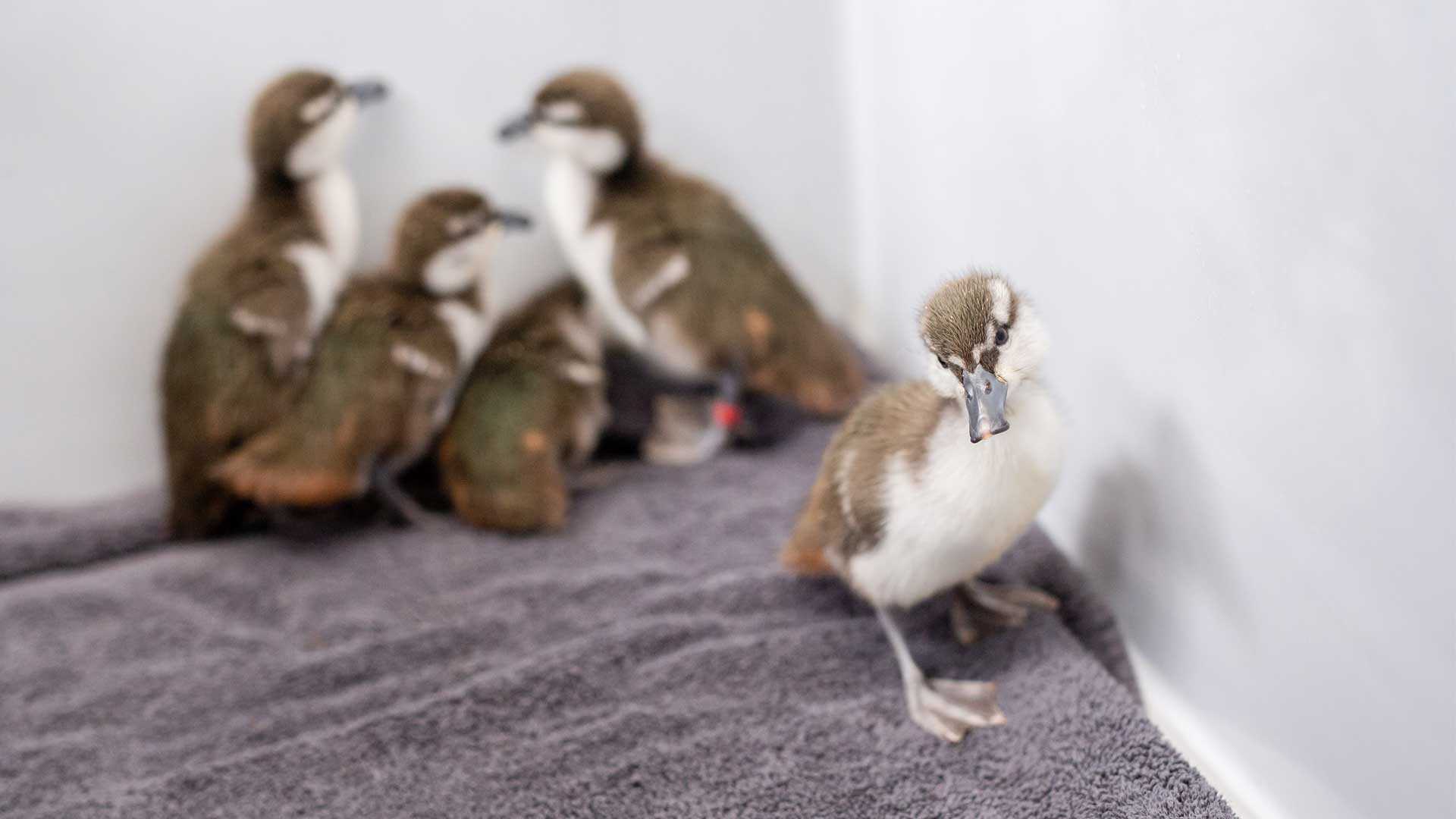 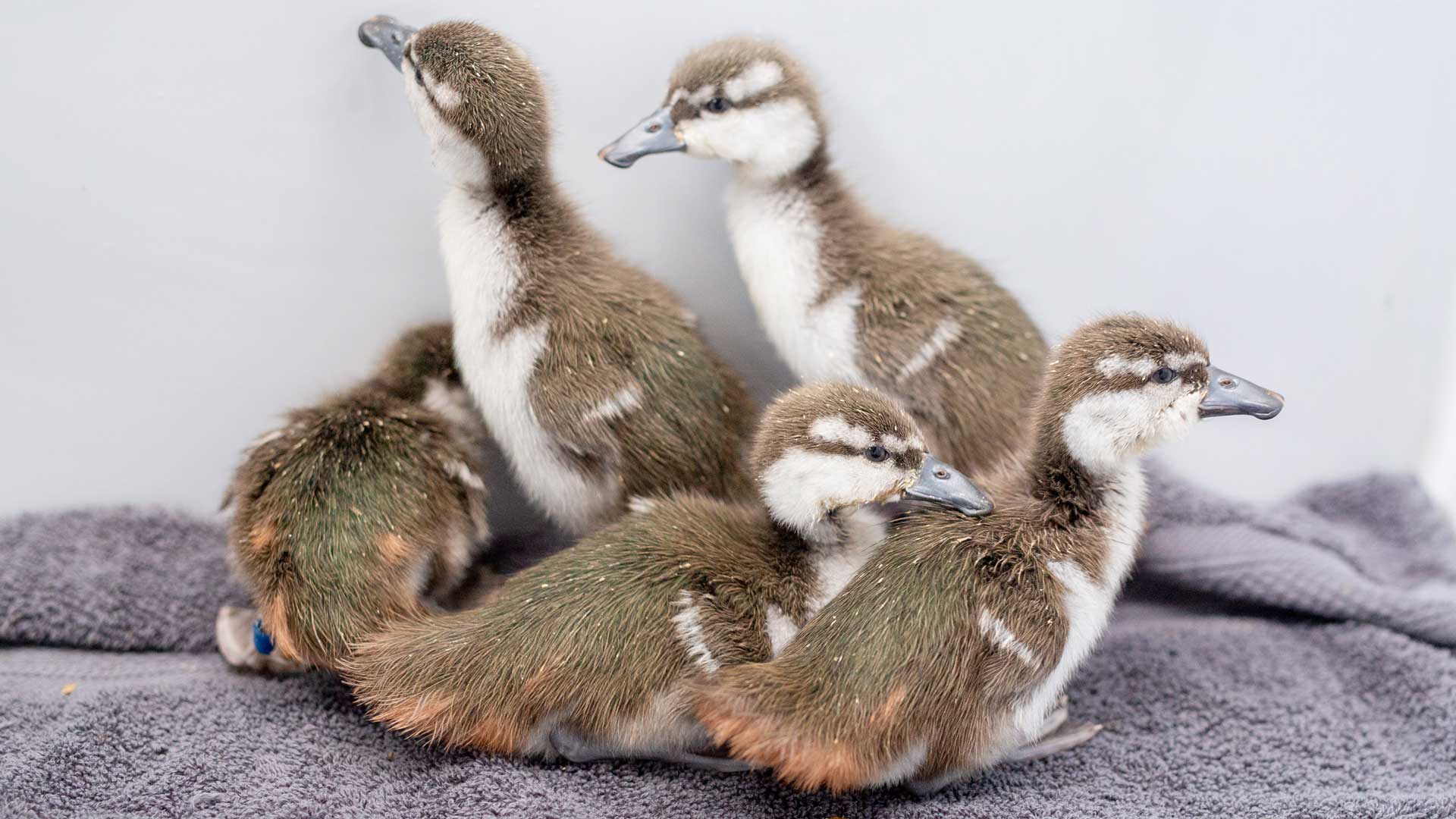 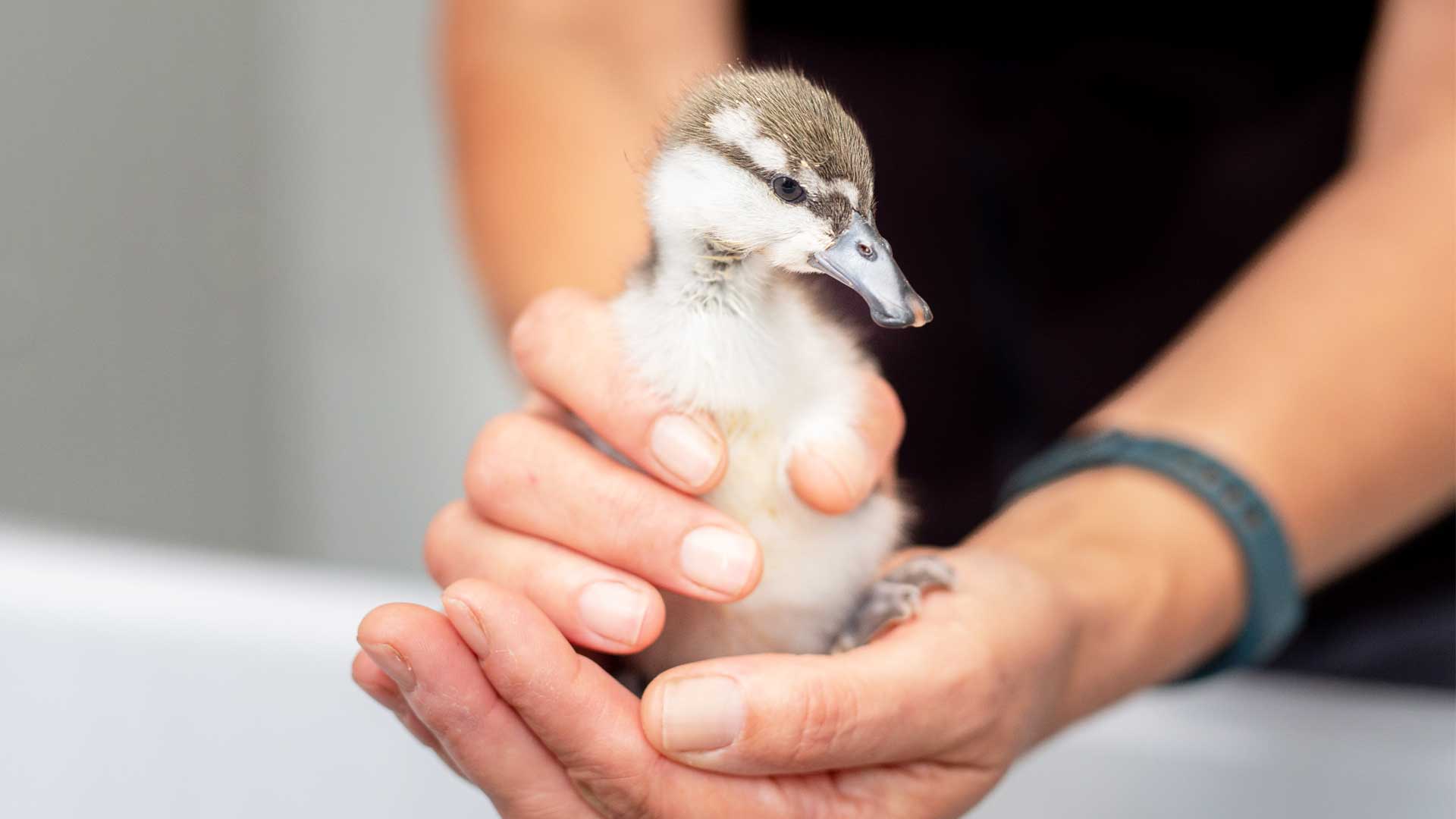 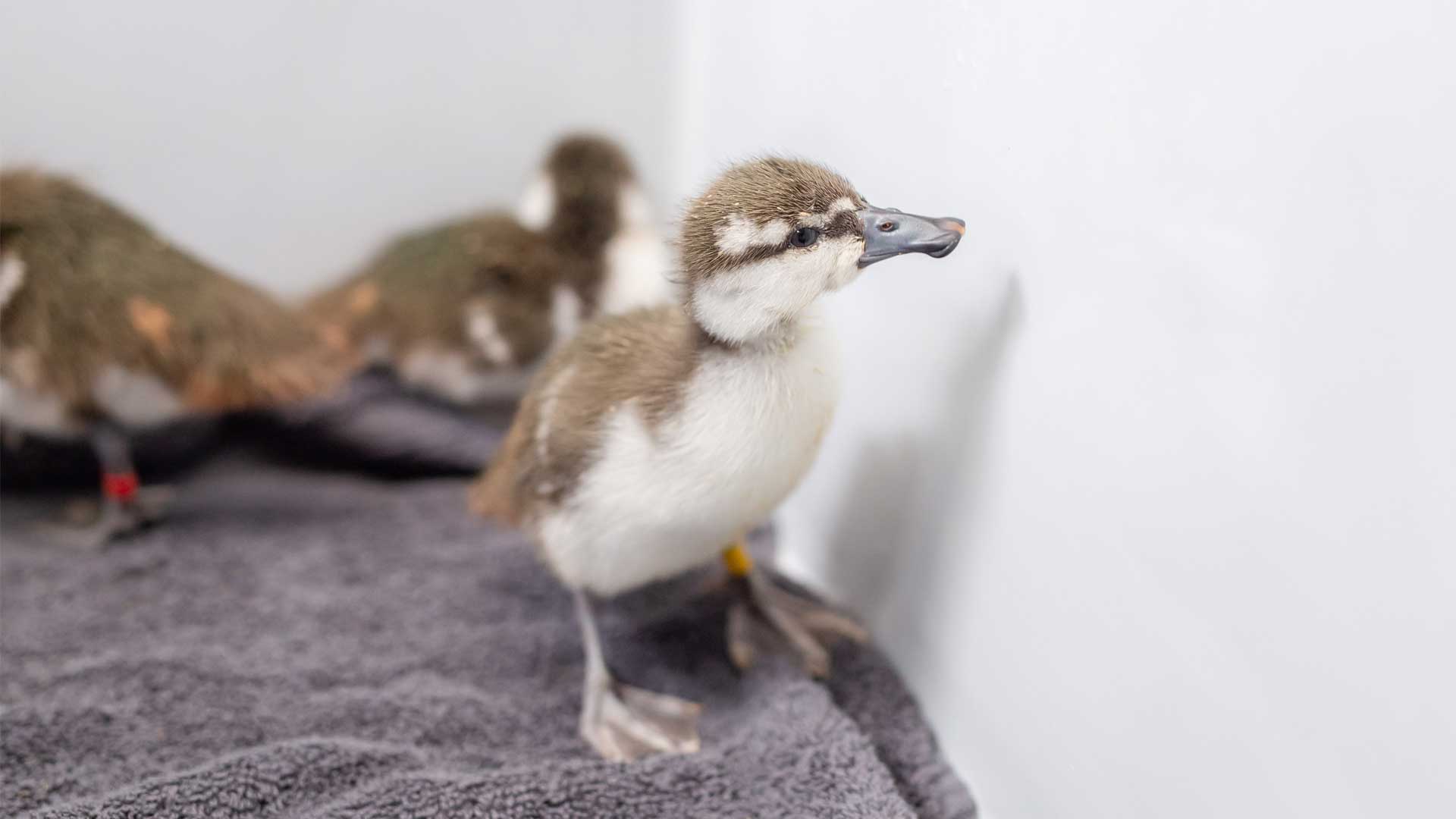 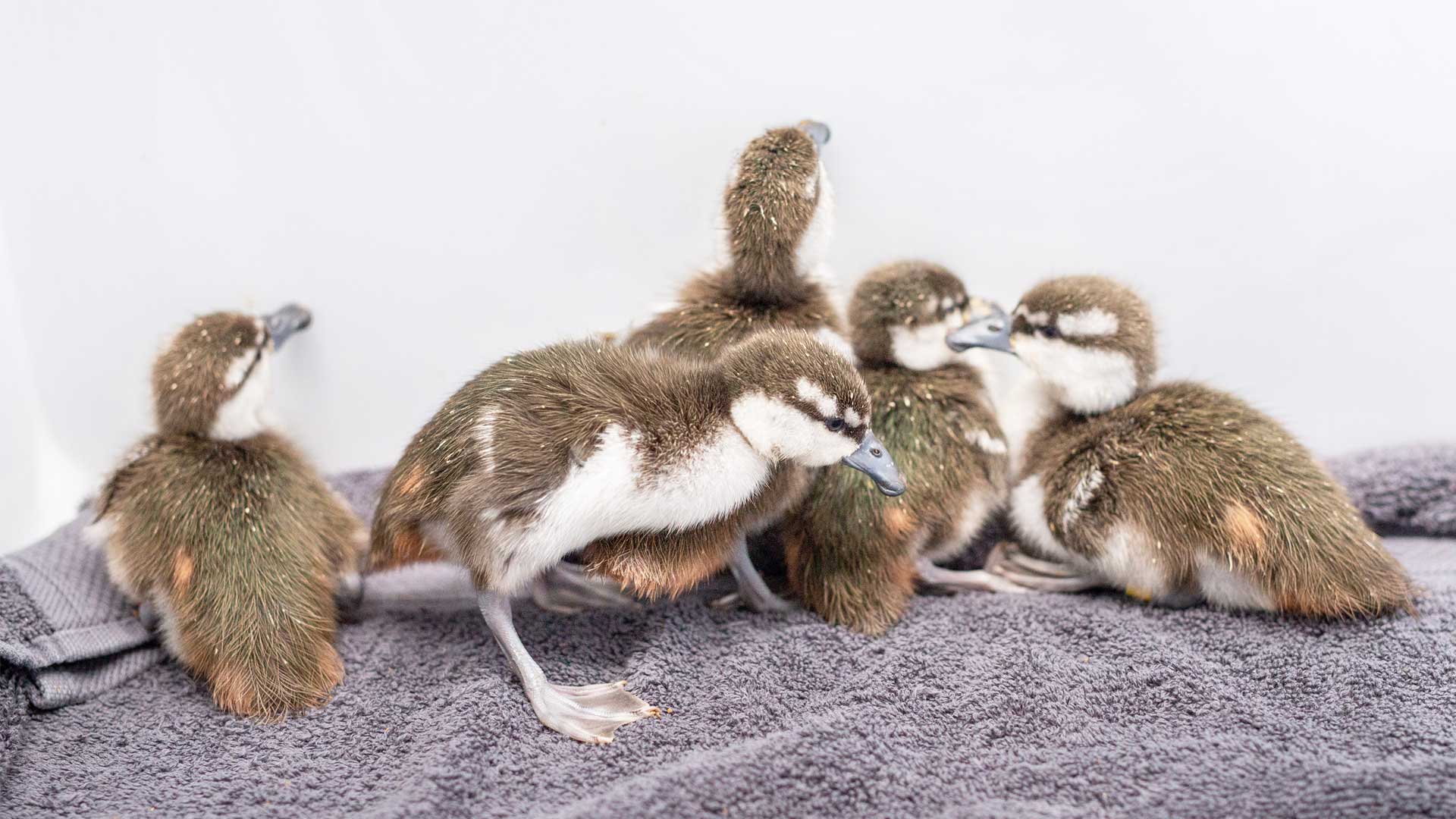 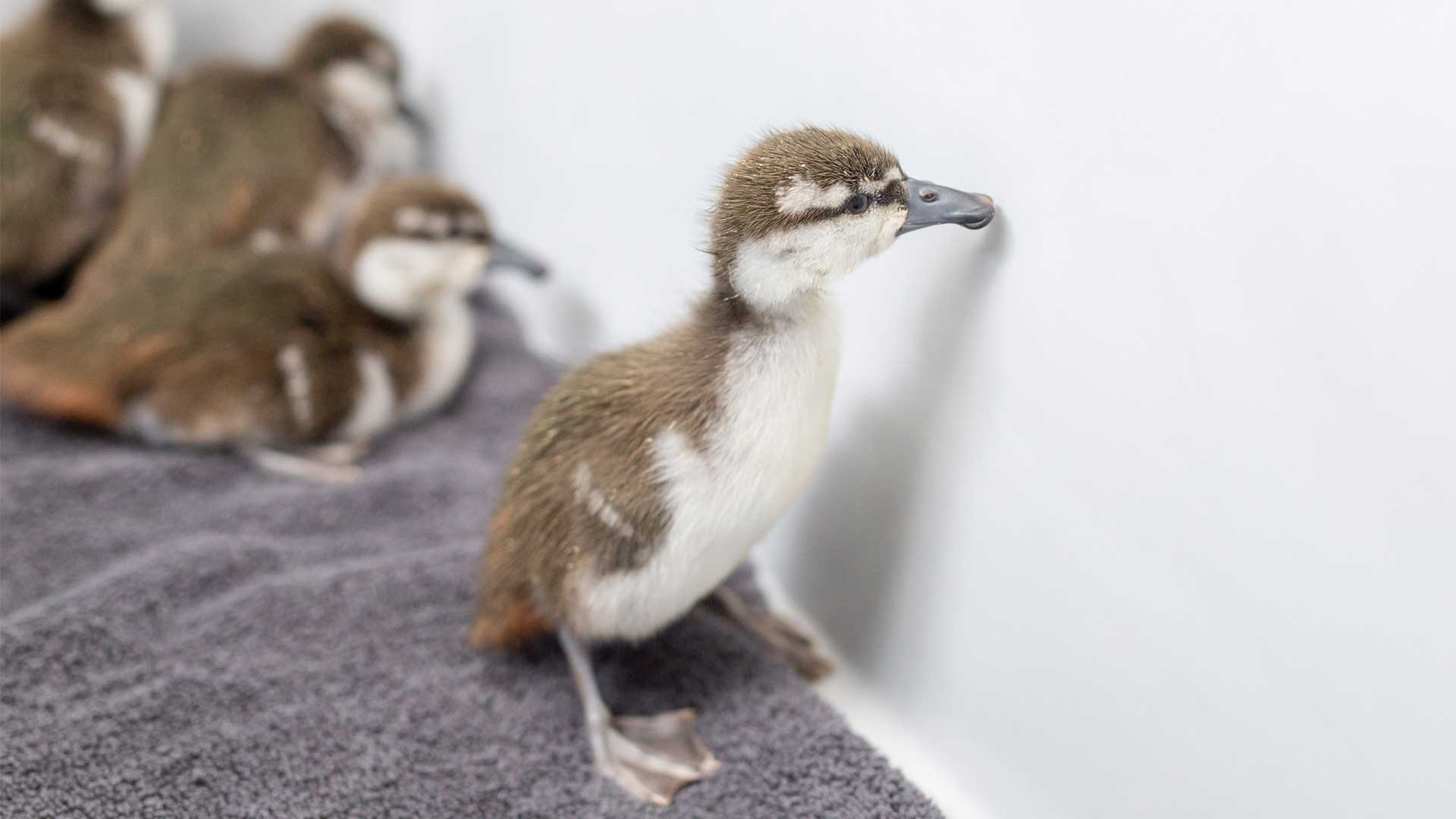 Whio, also known as blue duck, are among our most unusual species of waterfowl. They are found only in clean, fast-flowing, mountain rivers of the North and South Islands and are one of only three waterfowl species in the world to live year round in this type of environment. With no close relatives anywhere in the world they are the only member of their genus, and their isolation in New Zealand has led to a number of unique anatomical and behavioral features. A streamlined head, extra-large webbed feet to enable them to feed and manoeuver in fast-moving currents, and the anterior border of their upper mandible has a thick, fleshy lip that overlaps the lower mandible allowing them to scrape insect larvae off submerged rocks – almost the sole constituent of their wild diet.

Whio are slate blue in colour and blend very well against the wet river rocks. Males make a distinctive ‘whio’ whistle, while females utter a low rasping growl. Pairs are monogamous year-round and very territorial. They are active primarily at dawn and dusk, preferring to hide throughout the rest of the day.

Whio were once widespread throughout New Zealand but there are now fewer than 3000 individuals left and their population is continuing to decline. The greatest threat to their survival is habitat deterioration from hydro-electric damming, introduced predators such as stoats, possums, cats and dogs and human disturbance from recreational activities such as kayaking, rafting and angling. There is no option to translocate this species to predator free islands, as off shore islands cannot provide the river system they require to survive.

Pāteke, also known as brown teal, are a small dabbling duck which inhabit lowland flood plains including pastoral land, forest remnants, wetlands and estuaries. They feed on a diverse range of terrestrial, freshwater and marine invertebrates as well as grasses and seeds. Pāteke are most active at dawn and dusk. Birds are either seen as part of a flock or as pairs, the latter being monogamous and fiercely territorial.

Unique to Aotearoa, whio are even rarer than some species of kiwi and need all the help they can get. Every healthy whio chick hatched at Auckland Zoo is part of a breed and release programme – where they eventually get sent to a duckling ‘boot-camp’, where they build up their muscles before being released to a pristine fast-flowing river.

Pāteke were once found throughout New Zealand but are now considered to be the rarest waterfowl on the mainland. The population is estimated to be between 2000 and 2500 individuals and is restricted mainly to Aotea (Great Barrier Island) and the Northland region of the North Island. Fortunately several new populations have been established around New Zealand via the release of captive reared birds or translocated wild birds. While their numbers are recovering, this species is still at significant risk of extinction if the threats to them, introduced predatory mammals and wetland drainage, are not continuously managed.

At Auckland Zoo we have two breeding pairs of both species. Breeding season is always a busy time and all our birds have their own distinct issues we need to monitor for a successful season. Most recently during the 2018/2019 season, our whio pairs produced 10 ducklings. To date Auckland Zoo has reared 45 whio for the release programme. To ensure the greatest success and to encourage re-clutching, we remove their eggs, artificially incubate them and hand raise the ducklings until they are ten weeks of age. The ducklings are then transferred to the ‘hardening facility’ run by the Department of Conservation at the Tongariro National Trout Centre in Turangi before being released into the wild. Here they acclimate to natural alpine climate and fast-flowing cold water. They are eventually released at suitable sites across the North Island where intensive predator control is established and ongoing.

Pāteke have been another success story for Auckland Zoo, producing 135 ducklings since becoming involved in the recovery programme. When our ducklings are eight weeks old they are transferred to Isaac Conservation and Wildlife Trust in Christchurch for pre-release conditioning. From Isaac’s they are released into the wild at well-managed, predator free, or controlled, sites around New Zealand.

It’s a real privilege to work with these unique ducks, and while a huge amount of blood, sweat and sometimes tears goes into their conservation, the only reward we need is knowing that we are giving back to the wild and contributing to the future survival of these special species.

Get creative with your tamariki for our wildlife and be in to win some whio gear, by entering the Whio Forever colouring competition. Entries close 12 April 2019.

A paddling of precious whio ducklings have hatched!