With the sun starting to rise against a horizon of green and olive tones, the forest has never looked more impressive, and its expanse endless. We traipse up a usually busy road, but even the birds seem to still be asleep, the silence is almost unsettling. Our expert guide – Auckland Zoo Bird Keeper Erin Grierson – starts searching the embankment for our entrance to the forest. To the untrained eye (mine), this looks like some of the densest bush I have ever seen and I couldn’t imagine how this was supposedly our entrance, so I was surprised when she pulled out a rope and explained that to get in, we would be climbing up. That was when I realised, this day was not going to be as I had envisioned.

With perhaps the most eerie of songs – the kōkako is said to ‘haunt’ the forest, as they are heard but rarely seen, and ironically, we are here to count them. The kōkako census takes place yearly for around 10 weeks along different bait lines through the Waitakere Ranges. Once common around New Zealand, this endemic wattlebird was decimated due to predation at nests, and sadly the South Island kōkako are assumed extinct. North Island kōkako numbers are recovering, and now only considered ‘near threatened’. To determine the numbers of kōkako, every 200m at a bait station we stop and listen, and then use playback – a series of different kōkako calls – to draw them in, whether a pair of this songbird are known in the area or not. Being territorial, hearing the call of another kōkako encourages them to come in and check out the ‘intruder’.

I climbed the rope, and almost fell into a thick sea of green and brown scrub – the bush simply absorbed us. It was indescribable, and incredible – I don’t think there are words that can do this day justice. Tawa; kahikatea; rimu; puka; varieties of fern; an abundance of cutty grass – piercing every sense. The smell filled my nose for days to come, and the battle I lost to the bush is still evident. And even armed with the knowledge that we follow the pink tape through the bush, it still astounds me how confidently Erin directs us down the bait line we are following – under fallen trees, across rivers, and down muddy slopes – it is no easy feat. And even more astounding, is the ear they have for bird calls.

With perhaps the most eerie of songs – the kōkako is said to ‘haunt’ the forest, as they are heard but rarely seen, and ironically, we are here to count them. 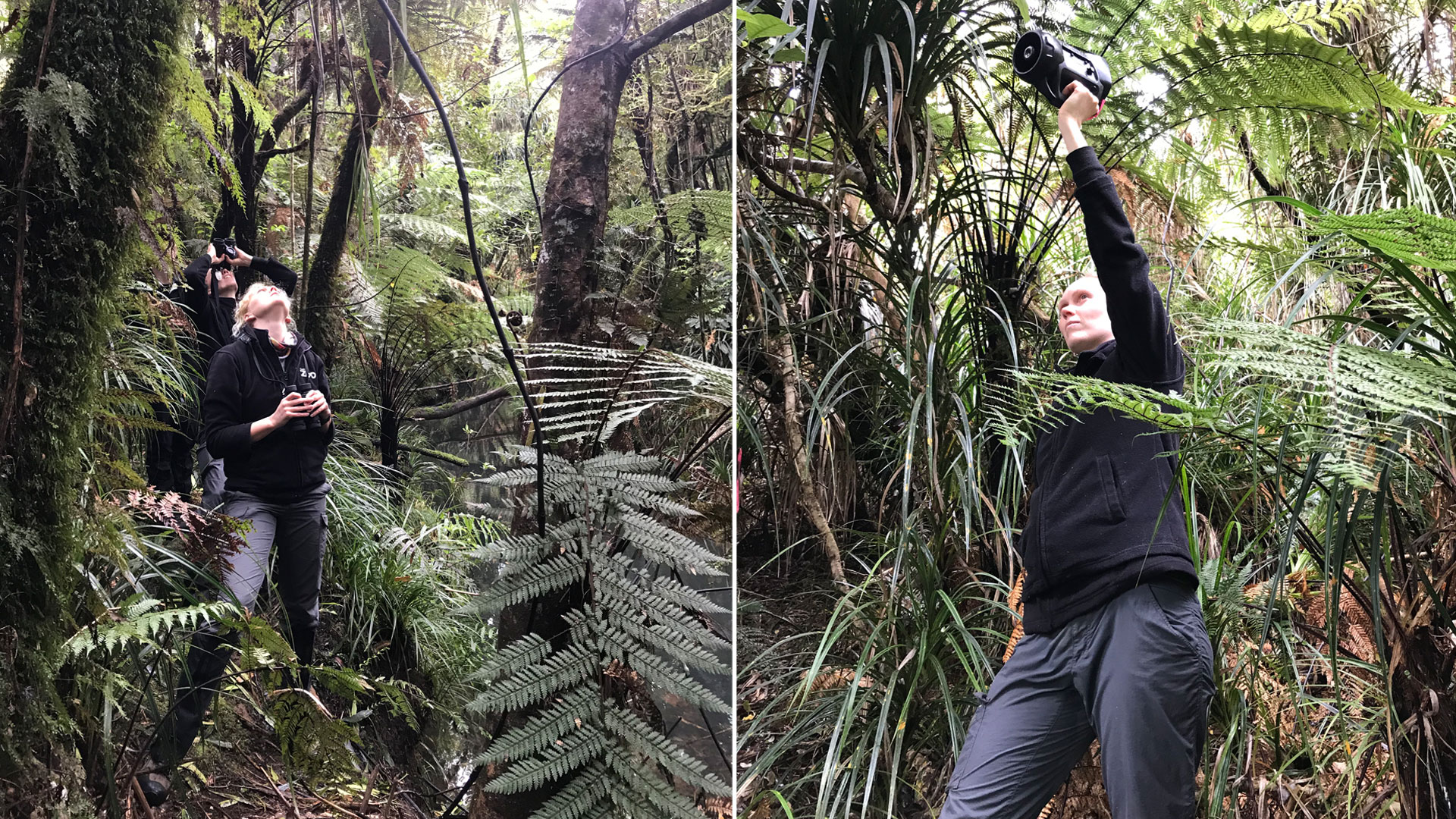 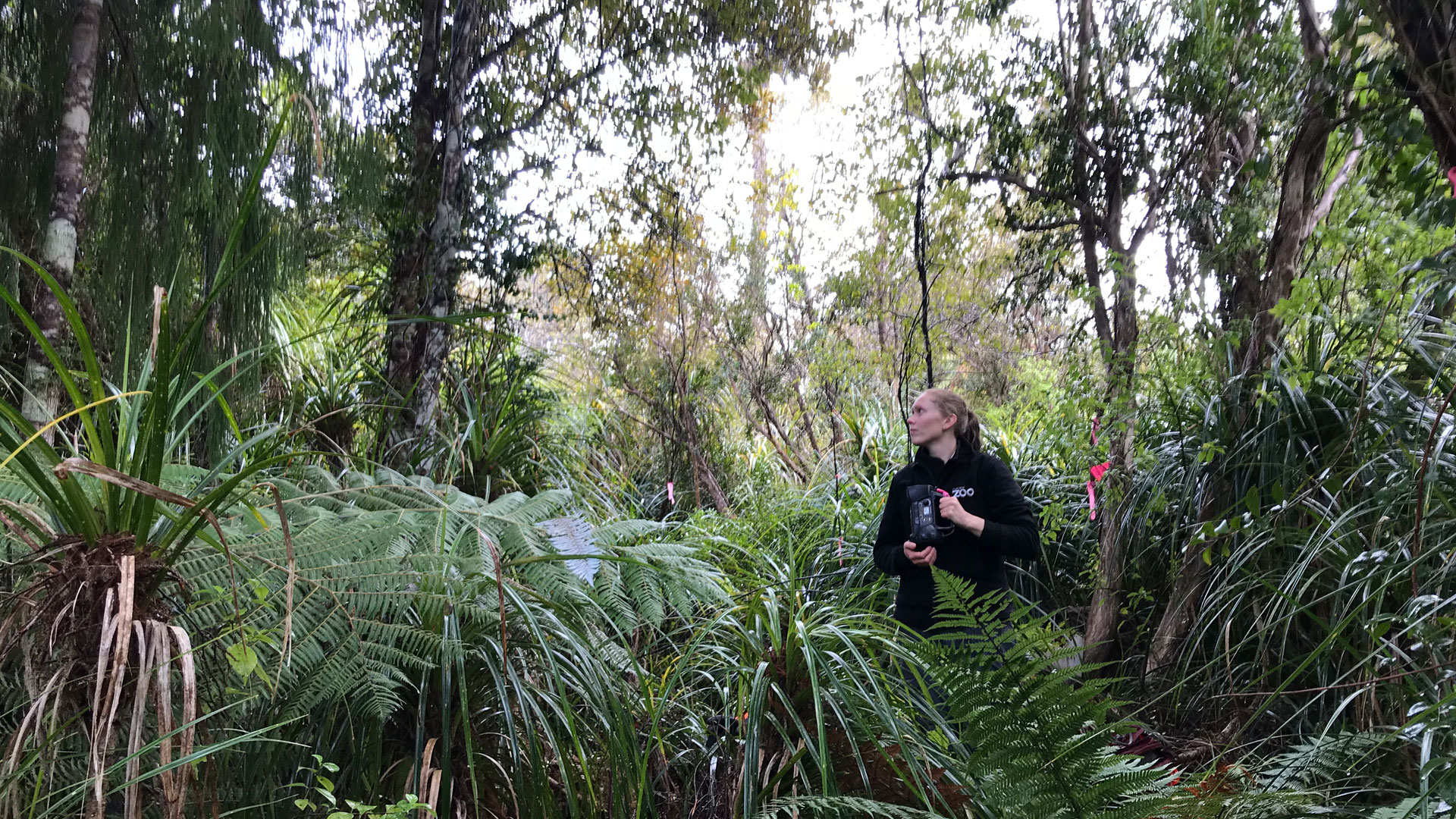 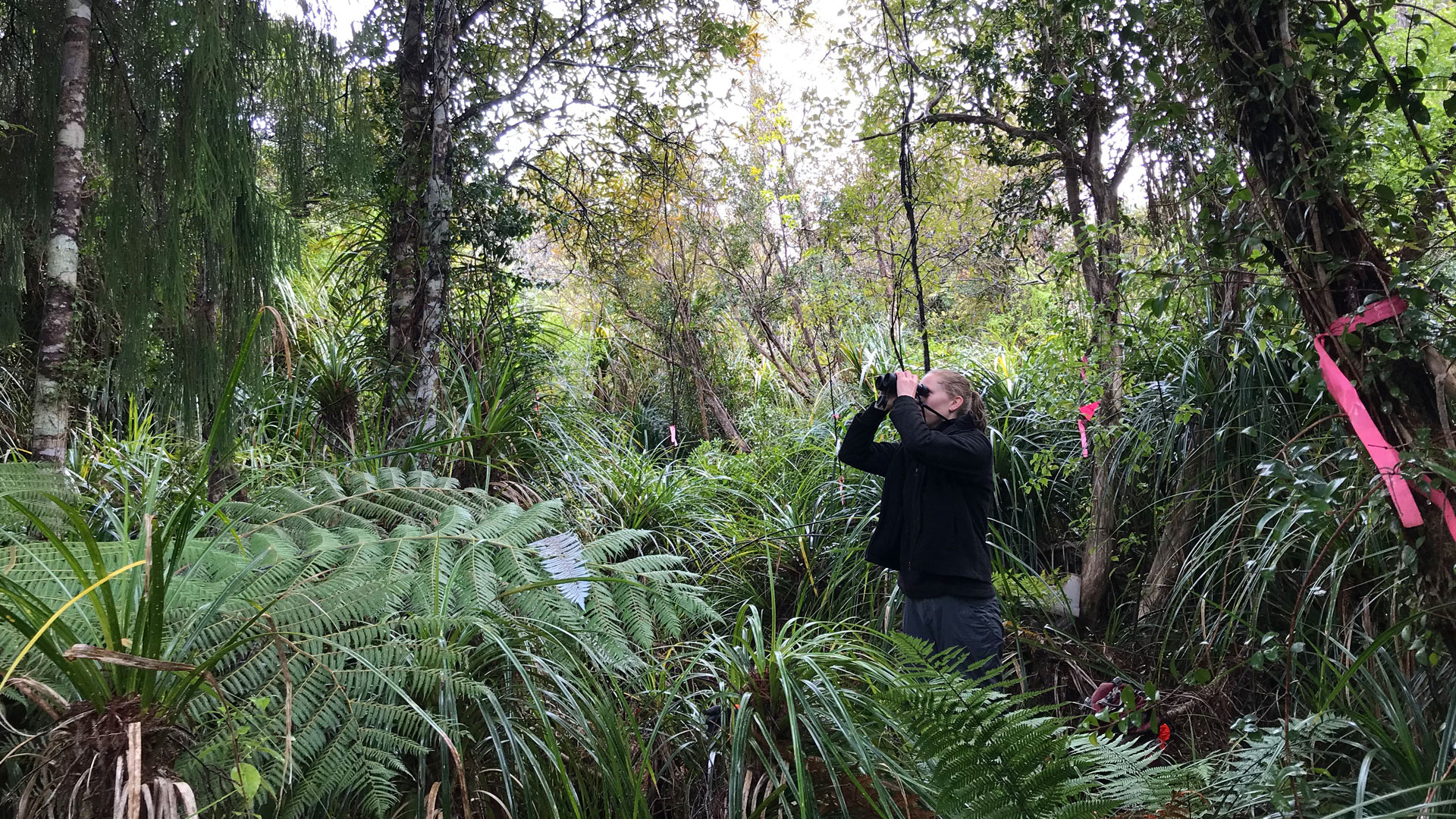 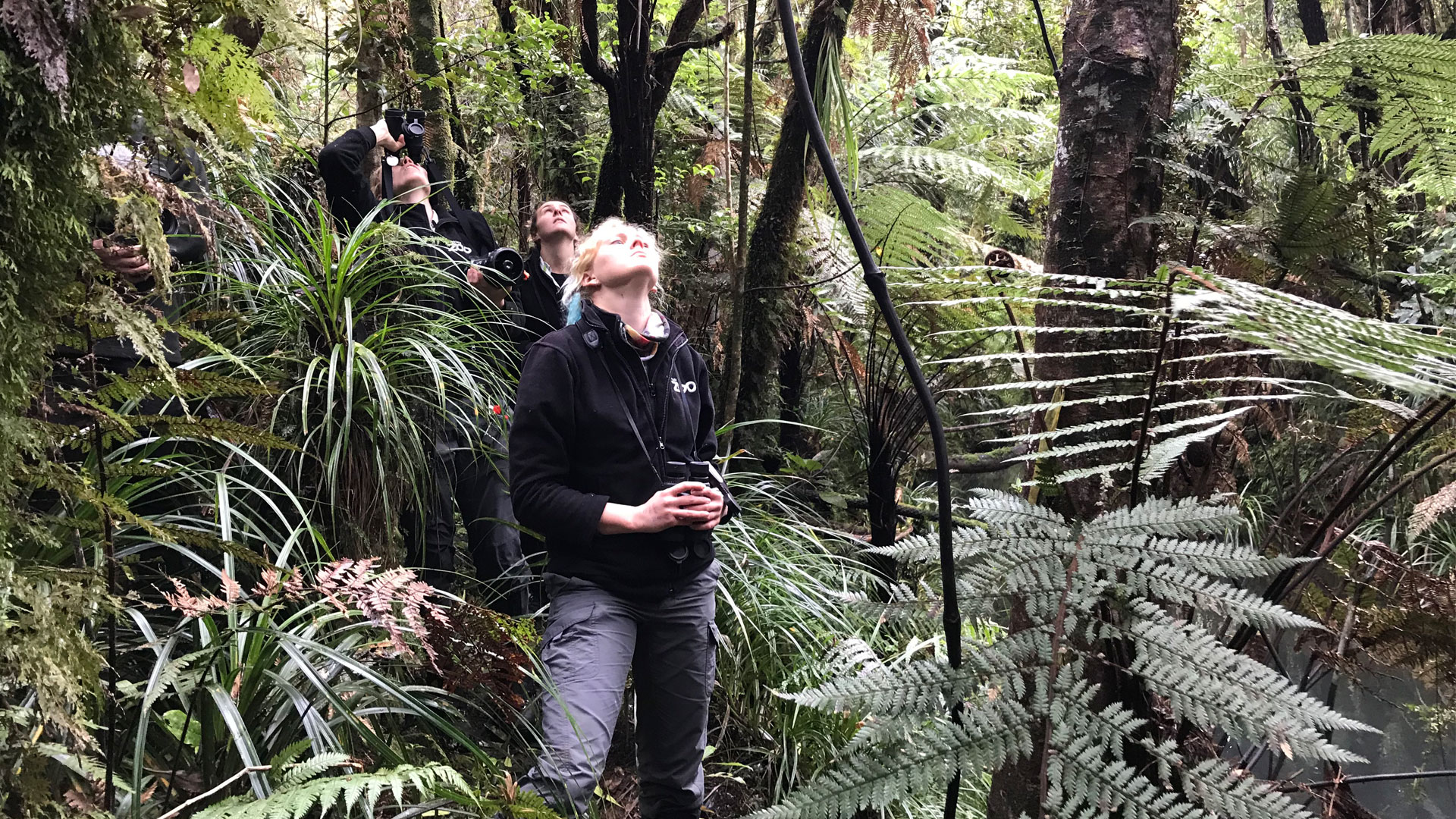 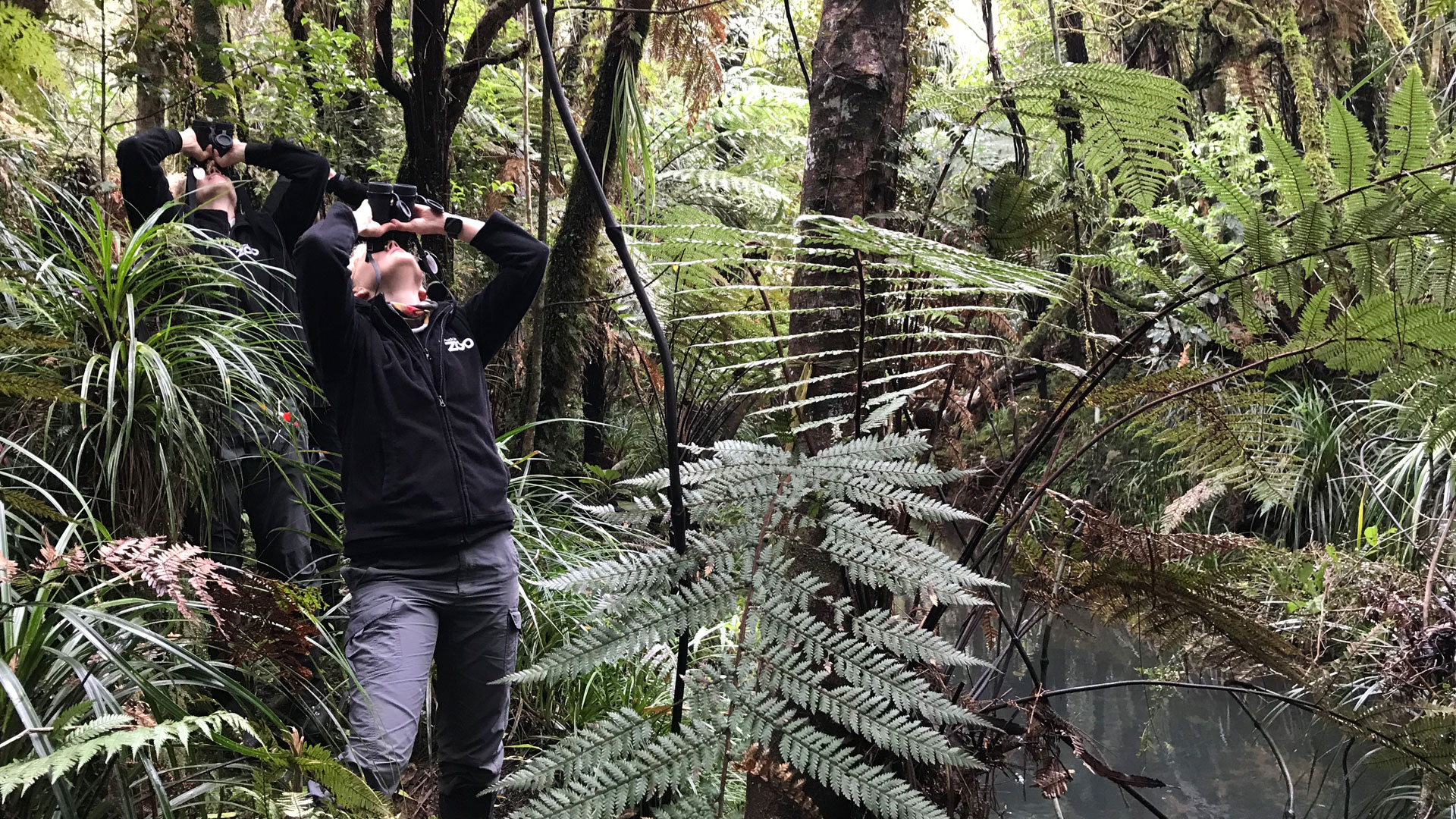 We make it to our first bait station. We stand still and listen intently. And I listened like I never had before. The silence was deafening, until I heard a bird, and although it turns out it was just a tūī, Erin still jotted down that she had heard the distant mew of a kōkako. Fascinating. The skill that goes into recognising that particular call, over the calls of tūī – she is an expert in her own right. With plenty of bait boxes to go, we have many more opportunities to hear and see this elusive ‘ghost of the forest’. We journeyed on, urging the bush to let us through.

Situated in the northern part of Auckland’s Waitakere Ranges Regional Park, the Ark has been gradually expanding since 2003 – it is now around 2300 hectares. Ark in the park is a partnership between Forest and Bird and Auckland Council, supported by the Department of Conservation. And what makes this area special is the predator control – a grid of bait stations renewed three times a season, monitor tunnels and traps, and weed control – allowing existing flora and fauna to recover, and a reintroduction of endemic birds, notably kōkako.

We trekked from bait station to bait station, with kōkako evading us at every opportunity. Erin gradually losing faith that this beautiful dark bird, with striking blue wattles and a black mask, that she had promised we could come and film, would ever show itself. We heard plenty of calls, though I don’t have the skill and experience that years of caring for birds at Auckland Zoo have brought her, so I was potentially hearing a lot of tūī. We make it to the last bait station – a beautiful clearing, lush bright and colourful, with one old tree towering over us, making us feel small and insignificant. Would our last stop be fruitful with kōkako?

Like a statue, Erin listened carefully and picked up her binoculars.

“I think that’s kōkako,” she whispered, almost not believing her own words. Her eyes widened, and a grin overcame her.

“Do you see it?” she said, with far more enthusiasm. And we did. Fluttering around in a tree just next to us, defending its space from a tūī that wasn’t so happy with its new guest. Her excitement was infectious, and we were taking turns borrowing her binoculars, getting a glimpse of this elusive ‘ghost’. The day was a success, though even without kōkako, the experience was like none other, and my perspective of what contributing to conservation actually meant evolved – it was certainly no walk in the park!

As I warned, there are no words that will do this experience justice, and no video which will give you an understanding of how the bush awakens your senses, and your memory embraces it tightly. Conservation isn’t just for scientists, and talented bird keepers like Erin. Projects like this one are largely possible due to the efforts of volunteers, so I would encourage you to experience it for yourself, and contribute to bringing New Zealand’s endemic species back from the brink. Learn more on the Ark in the Park website.

Kaitiaki for Rāpoka – the World’s most Endangered Sea Lion

We’ve got something to skraaaaark about!