In November 2020, two of Auckland Zoo’s ectotherm keepers set out for a nondescript patch of forest, roughly an hour out of Greymouth, to learn as much as they could about an extremely rare little brown skink.

With a conservation status of ‘Nationally-Critical’, the species was only discovered as recently as the 1990’s and was subsequently named the ‘Alborn skink’ (Oligosoma albornense) in 2019. Its name is in reference to the now-defunct Alborn Coal Mine in Reefton, established by the Alborn family in 1908.

How did a species that is millions of years old take so long to be discovered? There was originally thought to be only one type of speckled skink in Aotearoa but over time experts have identified at least six different but closely-related species. New Zealand skinks show high levels of morphological conservatism; this means different species can look almost identical to one another with only subtle characteristics that differentiate them. These differences can relate to their colouration, scale composition, body shape and proportions. However, as techniques for assessing and understanding genetic variation have developed and become more common place, the hidden diversity of New Zealand lizards is becoming increasingly evident, with the number of recognised skinks and geckos now totaling more than 120 species!

While the Alborn skink is now known to science, there are still significant gaps in our knowledge. In order to take positive action, conservationists need to know about a species life history, distribution, habitat preferences and perhaps most importantly – the threats to its continued survival, to create a specific conservation management plan to safeguard its future. That’s where we come in. 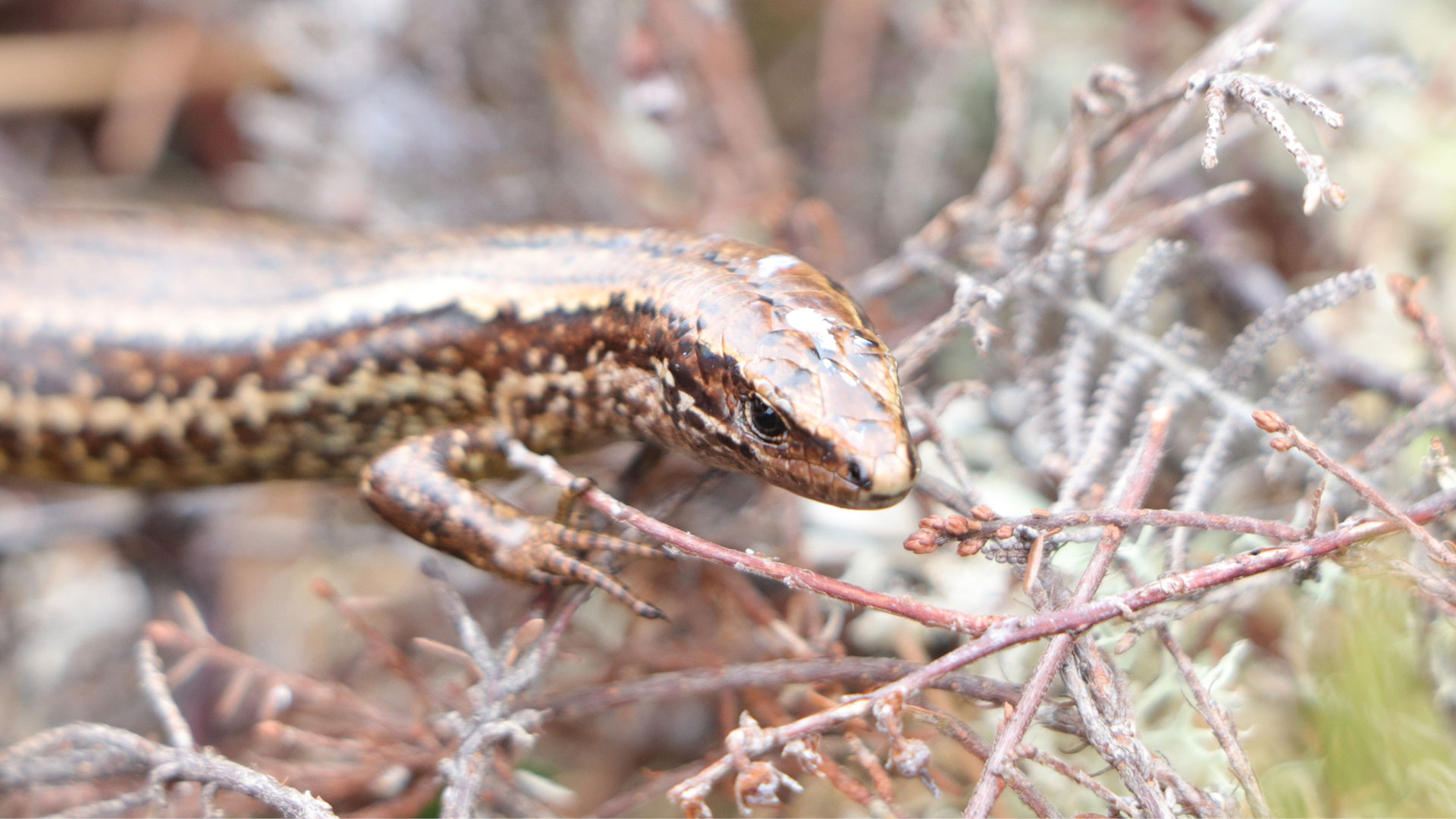 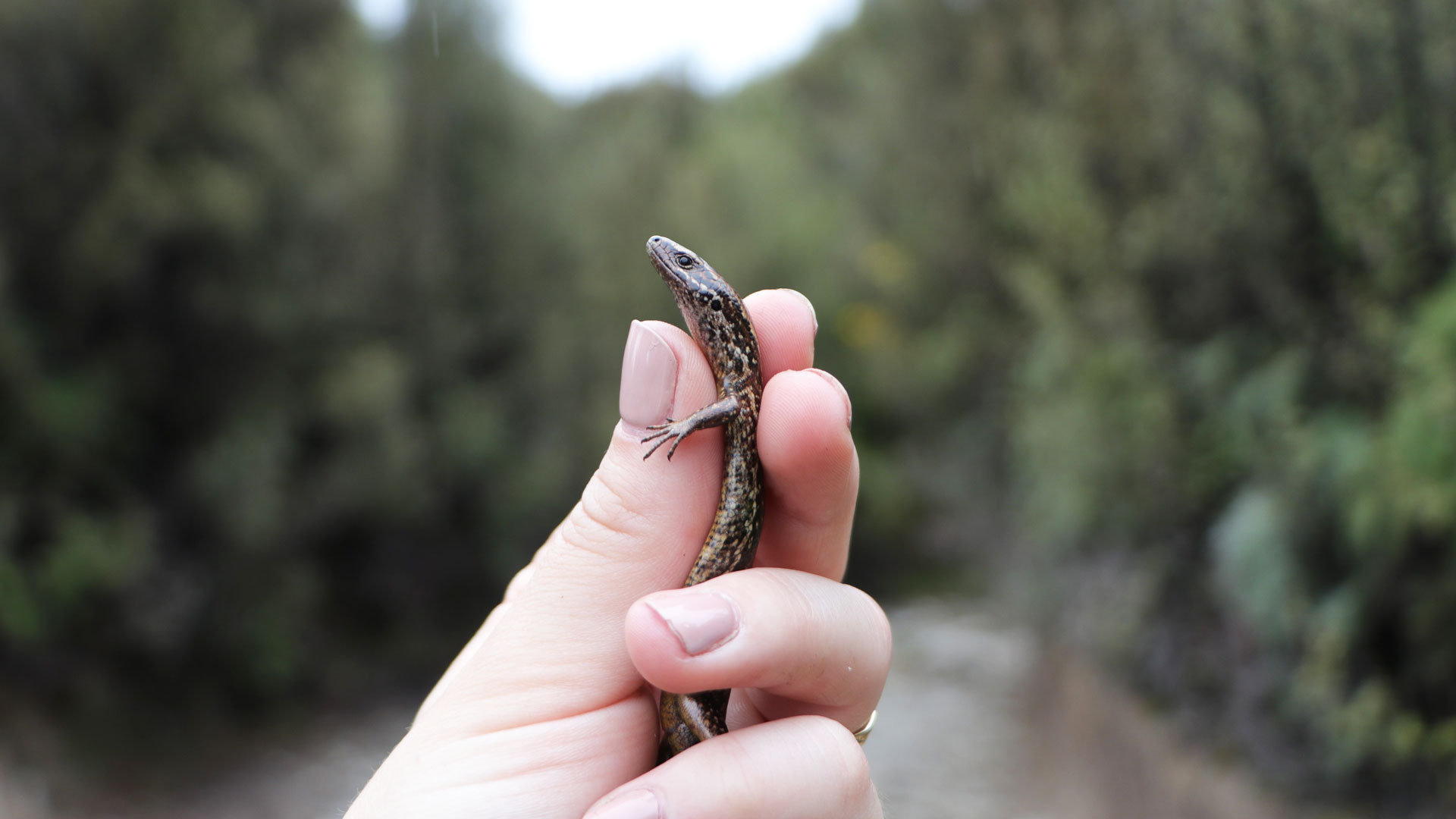 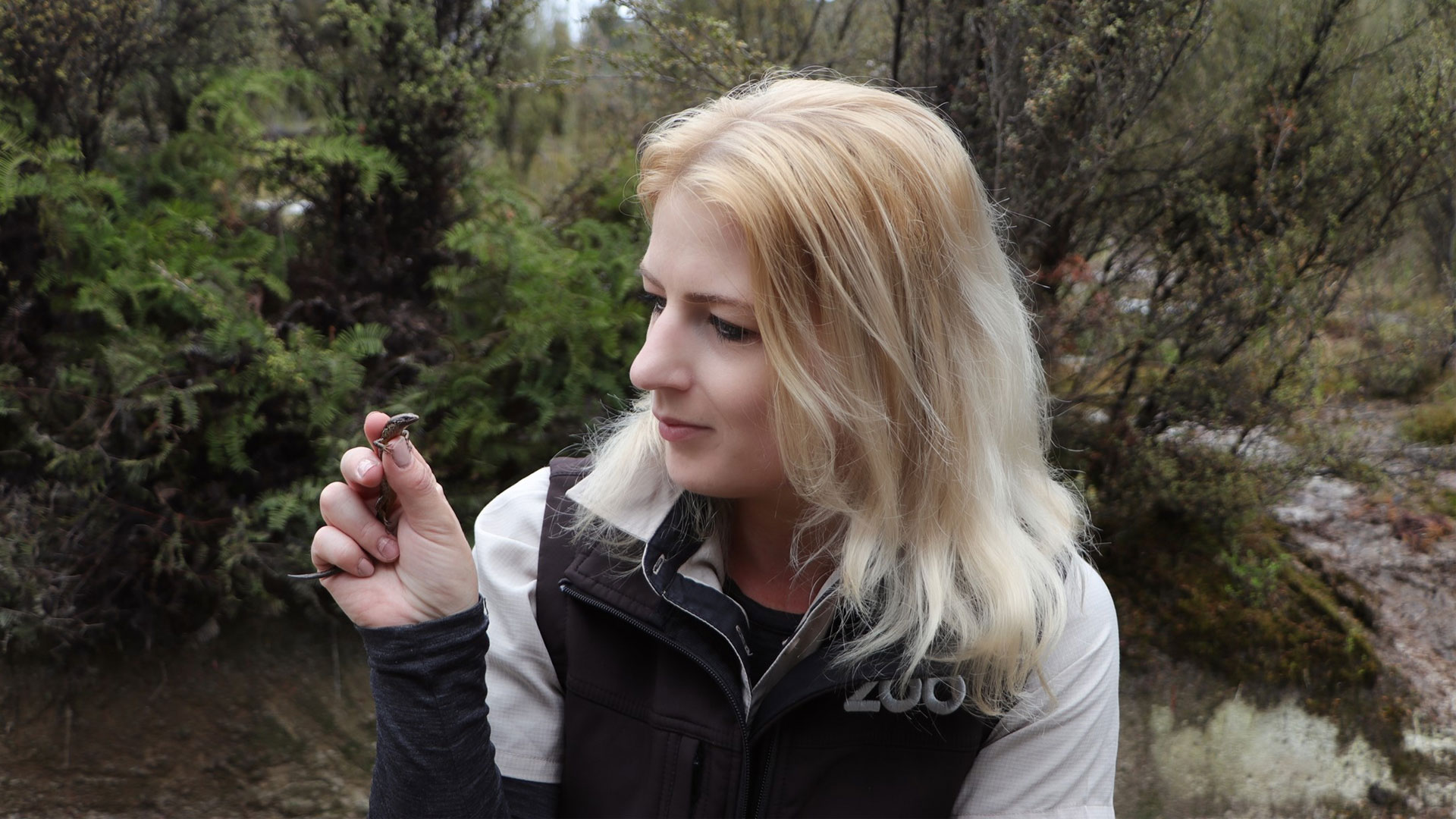 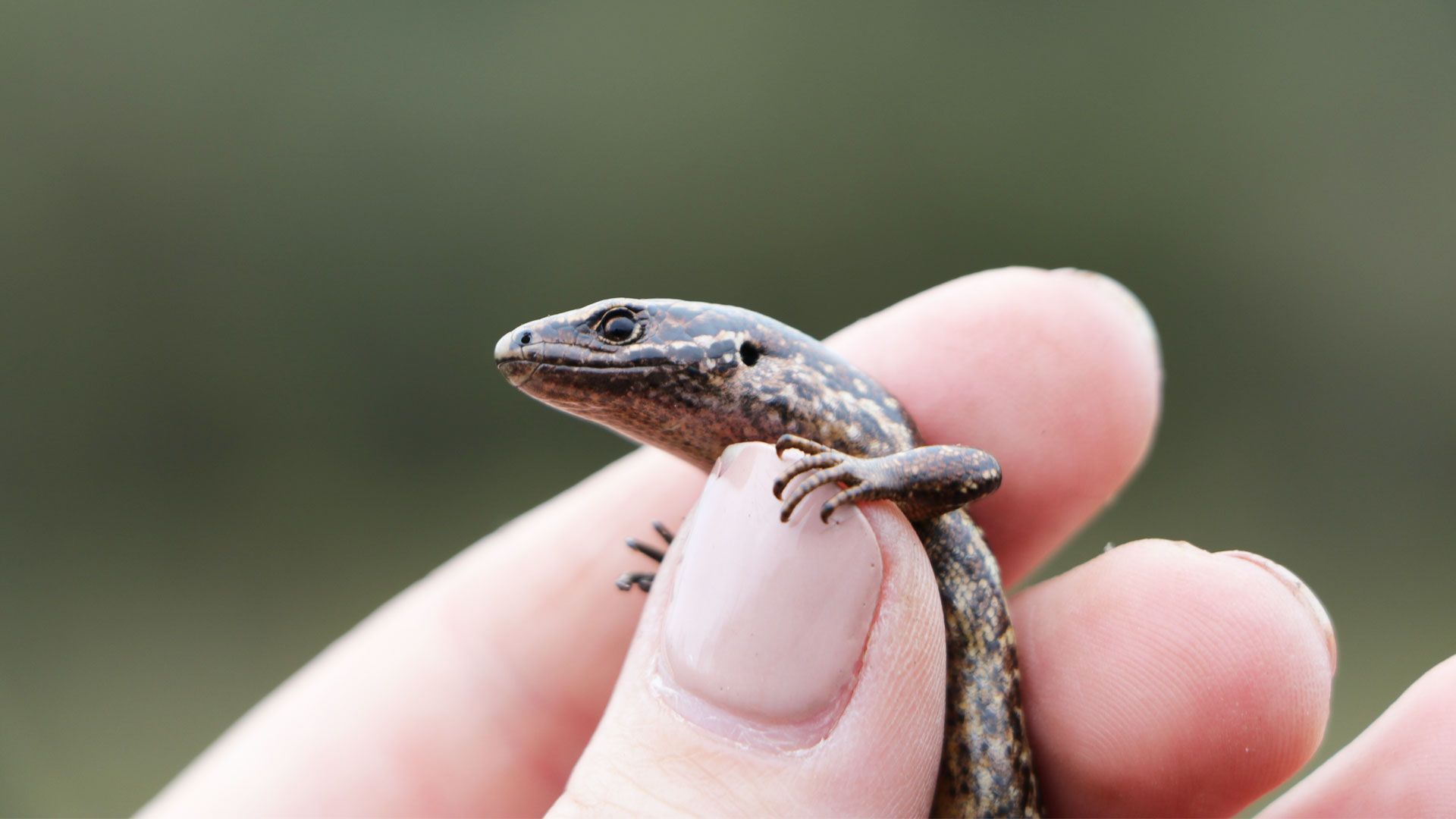 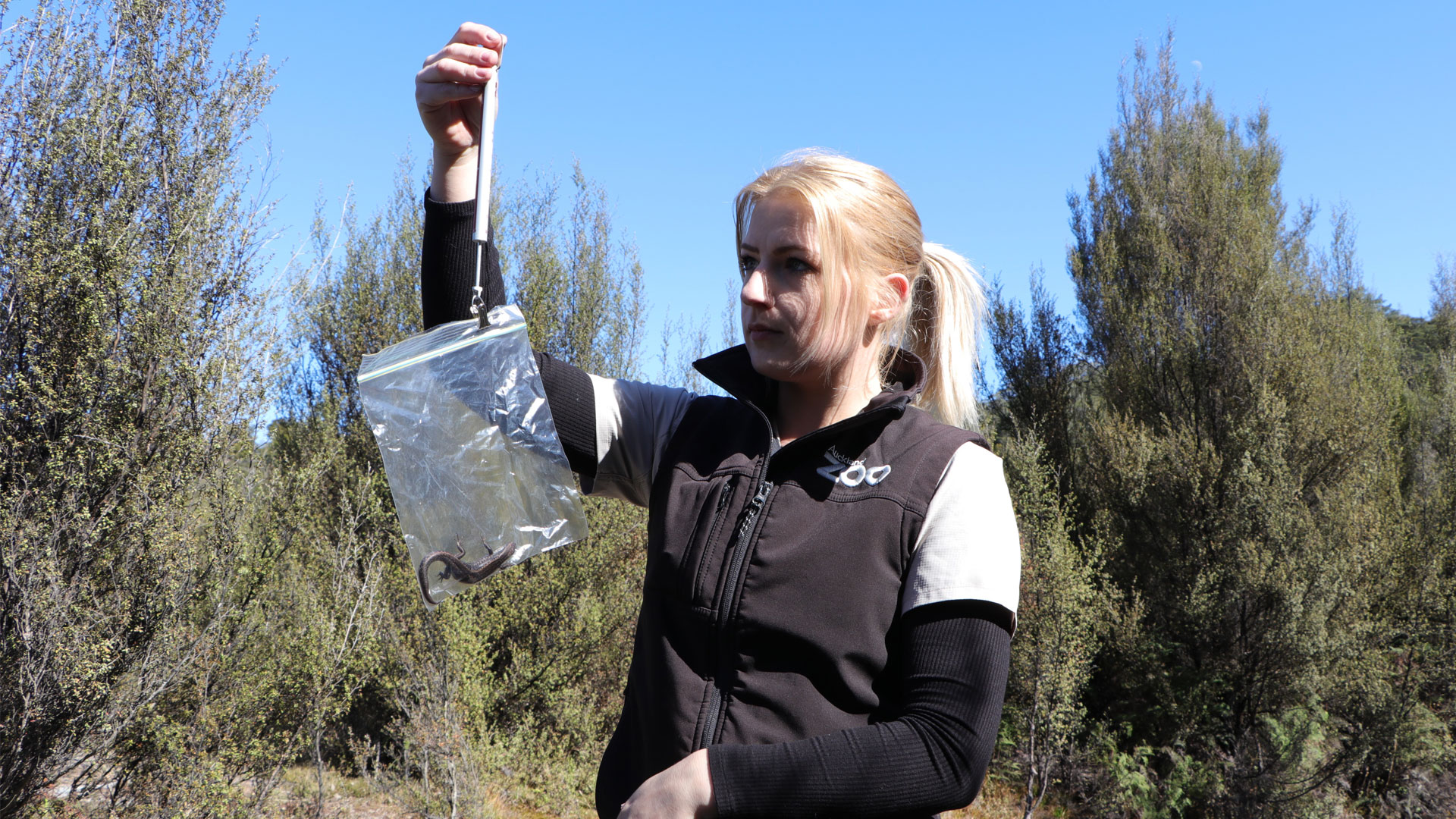 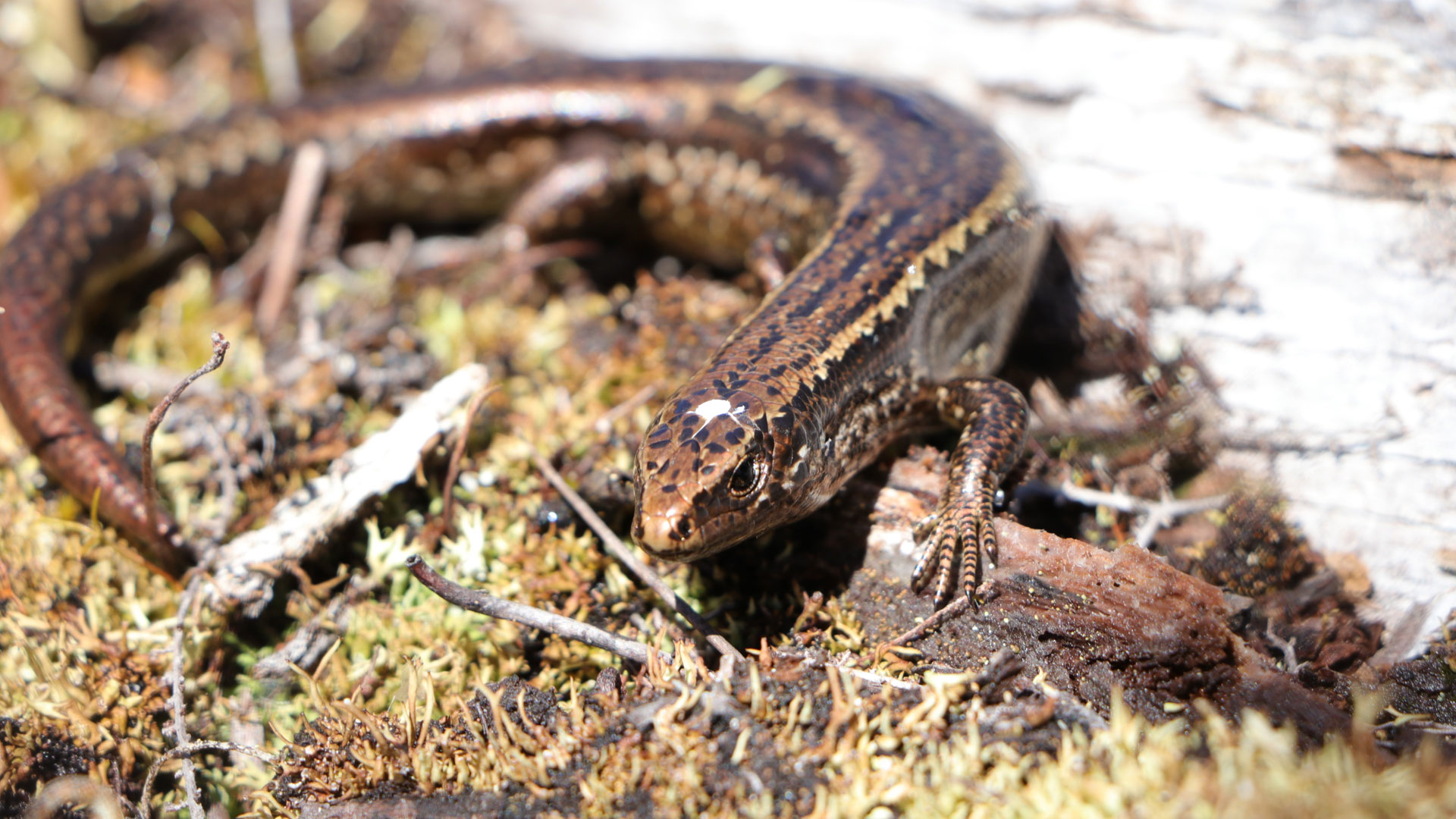 Monitoring of the Alborn skink was initiated in 2015 by Department of Conservation, and we’ve recently embarked on a three-year partnership to help intensify this important work. Last November, the first in a series of regular surveys by Auckland Zoo staff took place over eight days. Ectotherm keepers Sonja and Seth diligently searched through an approximately 200x200m area of swampy forest clearing, the only known location for this enigmatic skink, to see how many individuals could be located, and their information recorded.

To determine a species’ population in a given site, a scientific method called ‘mark-recapture’ is used. When an individual is captured a mark is applied on its back with non-toxic paint, and after being weighed, measured and photographed, the skink is released to the same location where it was originally found. This simple visual ID ensures that the same skink won’t be caught-up for a second time if it is seen within the same survey period, and as the mark will eventually rub off, it is a very non-invasive method to use on a wild species. Over a number of days during each survey period, the proportion of ‘new’ versus previously captured and marked individuals can be used to calculate a population estimate.

You may wonder – how can our experts possibly tell the skinks apart in the long term? Each skink has unique markings, most easily observed on its flanks – you could compare these to human fingerprints or the stripes of a zebra. When a new skink is found it is photographed, building up a database – or a scientific version of a family album - to compare with future skinks.

To help locate the skinks, surveyors set up a grid of inviting micro-habits across the site using squares of corrugated roofing material, these are called Artificial Cover Objects or ACOs for short and provide both a secure place to hide from inclement weather and a warm spot to bask when the sun comes out. Each ACO is numbered and plotted with GPS. All skinks captured are processed immediately: with weights, measurements (snout to vent and tail lengths) and ID photographs all completed at the site. If the individual is a new one to the database, a tiny sample of tissue is taken from the tip of the tail for DNA analysis.

When a site is repeatedly surveyed, the project team will glean valuable data about how robust the population is and useful insights into the species’ preferred habitat, behaviour and activity. Adjacent ‘satellite’ areas of similar suitable habitat are also investigated to determine the species range. Prior to this trip just 17 individuals had ever been recorded, but with our assistance an incredible 6 new individuals were found over this eight-day period. Ectotherm keeper Sonja says of this, “working for an organisation that places the conservation of our precious wildlife as its priority is a privilege and to be able to represent Auckland Zoo and support DOC directly in the field with projects like this is an opportunity that is so special and is something that I am very grateful to be a part of." Zoo staff are currently at the site this week where they will hopefully locate even more individuals.

How can you help this incredible native species? By loving your big, beautiful backyard and acting as a citizen scientist! If you spot a lizard, especially in the Buller and Westland areas, please contact your local DOC office so they can follow it up. You can find a detailed list of some key skink species and their photos on DOC’s website to help you in your efforts.

Locals can also play a role in helping to educate family and friends who may use four-wheel drives or motorbikes on conservation land that is off-limits to vehicles. Sadly, just prior to zoo staff visiting the site there was an incident of illegal vehicle activity in the area which resulted in ripped-up tracks and badly damaged skink habitat. . It’s important that Kiwis protect Aotearoa’s wild places and wildlife for generations to come, so if you see any activity like this, please contact DOC on 0800 DOC HOT and report it.

How do you tell a skink from a gecko? Firstly, skinks blink! Unlike geckos that use their tongues to clean their eyes. Skinks typically have small legs relative to their body size, no pronounced necks and long tails.

This rewarding work with the Alborn skink is an extension of our wider conservation partnership with DOC to conserve other threatened lizards endemic to the West Coast / Tai Poutini region of the South Island. In a special back of house facility at the zoo we’re currently caring for two other rare West Coast lizards – the cobble and Kapitia skinks. Both species were rescued by DOC before separate cyclones destroyed their tiny, fragile coastal habitats. The Zoo is working closely with DOC to plan the next stage in their recovery which will see both species returned to West Coast in dedicated, predator-free skink reserves.

You help us do incredible work just like this every time you visit the zoo or donate to our Conservation Fund. If you’d like to support us further, learn more here.

How do you X-ray a longfin eel?