While the New Zealand fur seal is commonly associated with residing in rocky coves and sand-lined headlands, the New Zealand sea lion has different ideas when it comes to choosing a home.

Sitting atop dense, bush-covered cliffs in the depths of Rakiura (Stewart Island), you may, if you’re lucky, spot glimpses of rāpoka (the New Zealand sea lion). In March, these remarkable and somewhat fearless creatures spend their time traversing the area’s hazardous landscape to find the perfect nesting and sheltering spot. While the New Zealand sea lion is a surprising mastermind at moving around the mud-laden, uneven terrain, it’s not such an easy feat for the group of conservationists who visit Stewart Island each year to complete important pup-tagging work.

Elephant and seal keeper Odin is one of the experts who boards the boat departing for Stewart Island each year, and this year, was his fourth time heading out. Thankfully he understands that hard work (and blisters) comes with the territory. And, that it’s all completely worth it to protect such a special species in need of help. 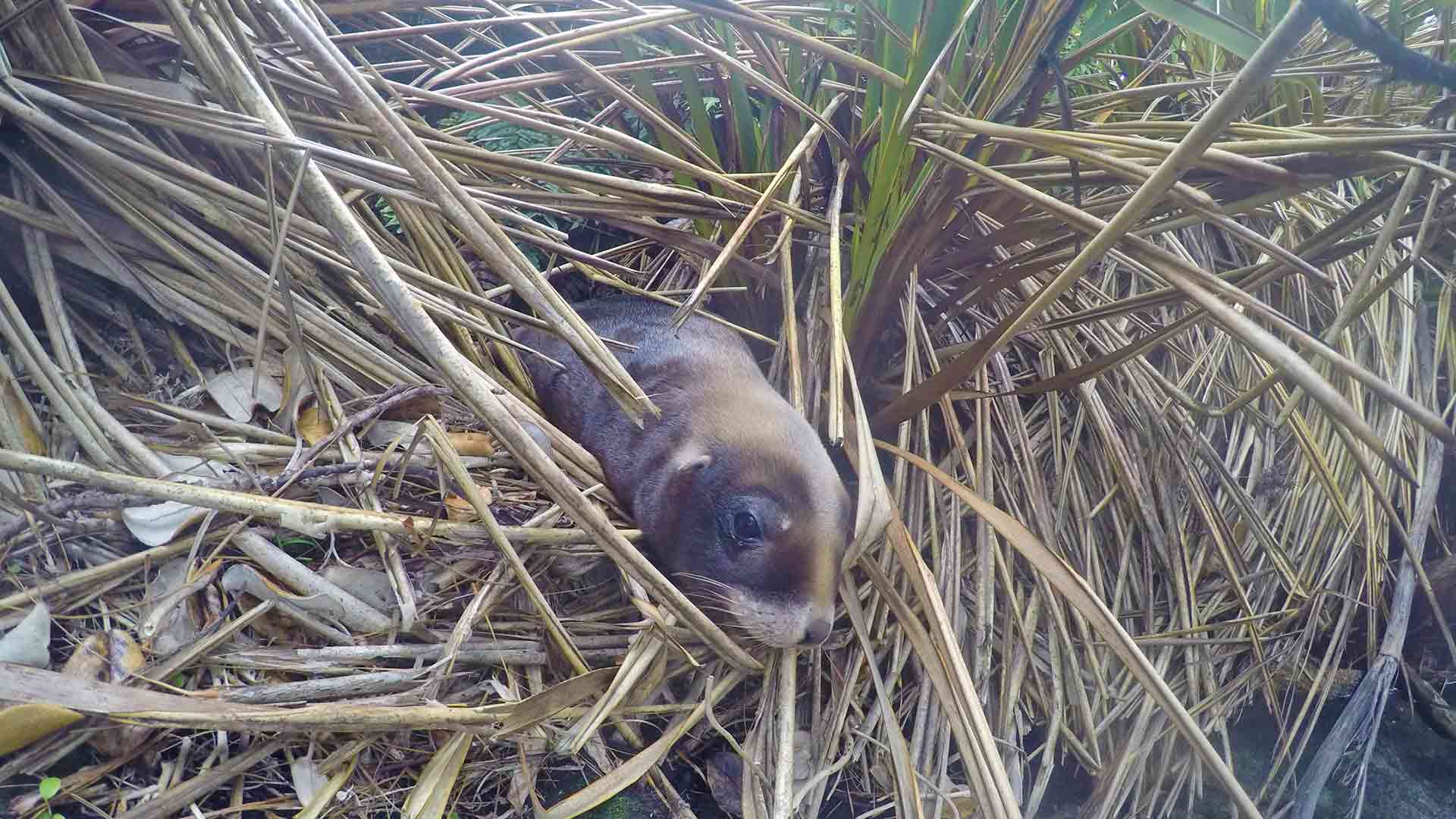 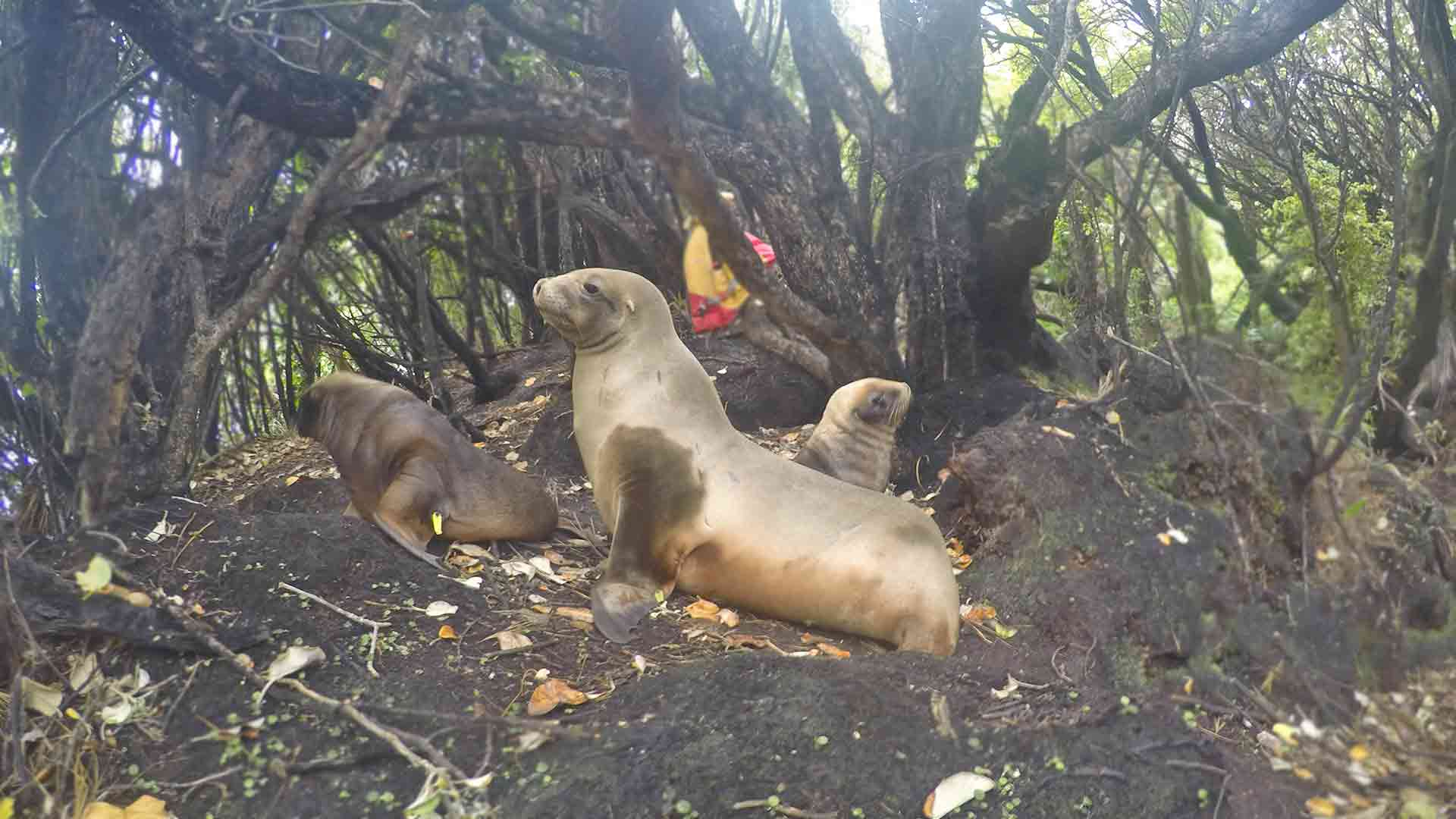 The New Zealand sea lion is one of the rarest – if not the rarest – sea lion species in the world. It’s estimated that there are only 10,000 left in the wild as much of the population was wiped out by early settlers and sealers in the 1800s. Once abundant around the mainland of New Zealand, now, just a small fraction remain around the South Island coast, while the remainder reside in Stewart Island and the Sub Antarctic’s.

Despite being tucked away in this small corner of Aotearoa, sea lions are still at risk. Their feeding grounds are regularly frequented by fishing boats and sea lions can sometimes become entangled in nets, which can lead to fatalities.

Since being sighted in Stewart Island’s Port Pegasus around seven years ago, Odin and the rest of the small conservation team have completed New Zealand sea lion pup tagging in March each year to better understand the population and breeding of this particular group, which, thanks to their tagging efforts, was recently recognised as an official colony. To gain this classification, there must be a pup-production level of at least 35 pups each season for five consecutive years which has been the case for rāpoka at Port Pegasus!

Tagging is the easiest way to count pups and the team must continue to do so to safeguard the colony’s future. By tagging pups each year, conservationists can determine a pool of known individuals and monitor survival, movement patterns, reproductive rate and recruitment. Effectively, it helps experts understand more about the sea lions population changes at Port Pegasus. However, tagging young seal pups isn’t a walk in the park. New Zealand sea lions on Rakiura don’t just shelter their pups on flat sandy beaches. Instead, the team of taggers have to trek for hours up steep hills and through thick bush to find young pups which is far from easy – especially when mothers and pups are so well camouflaged and move so quickly. 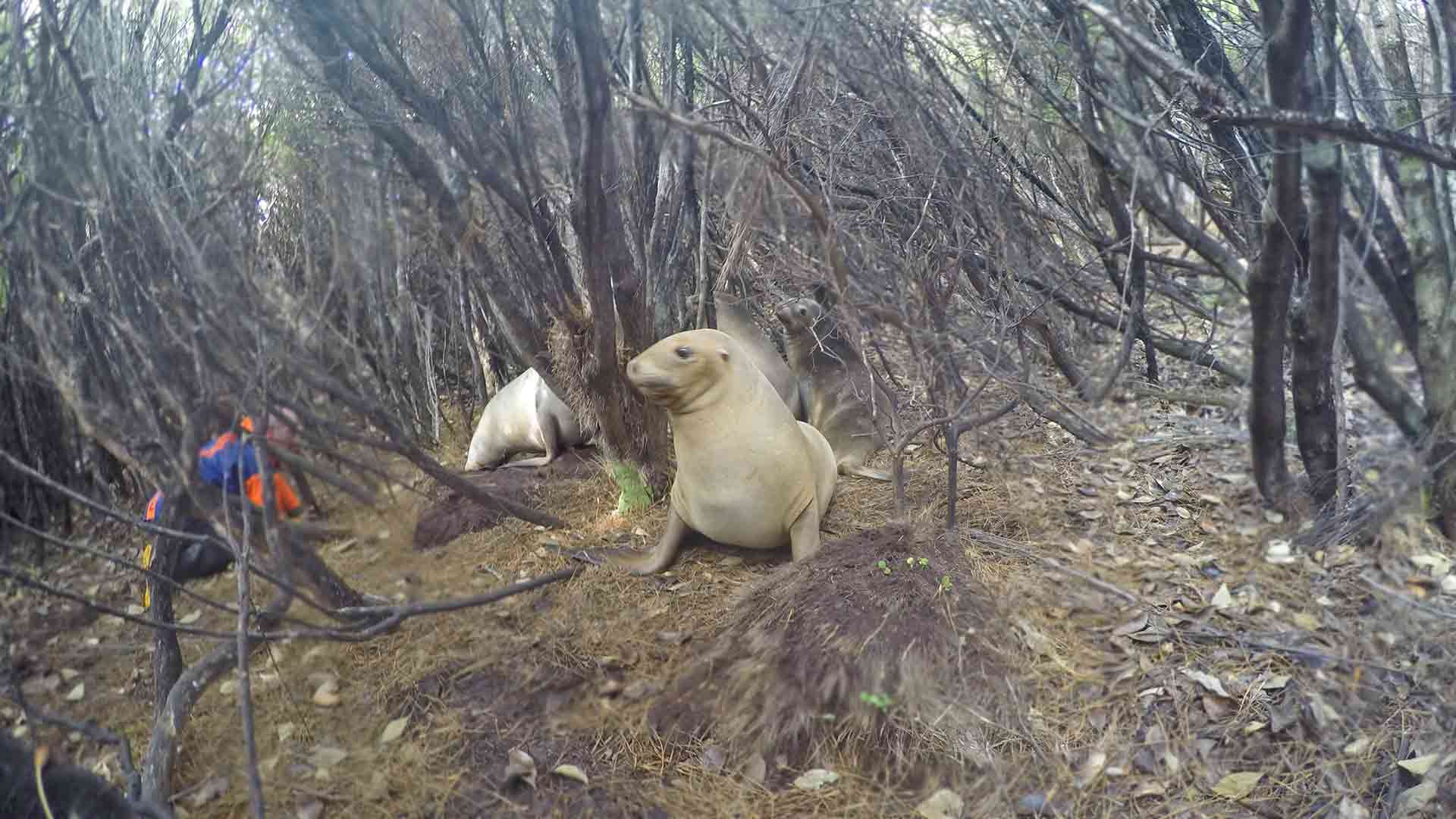 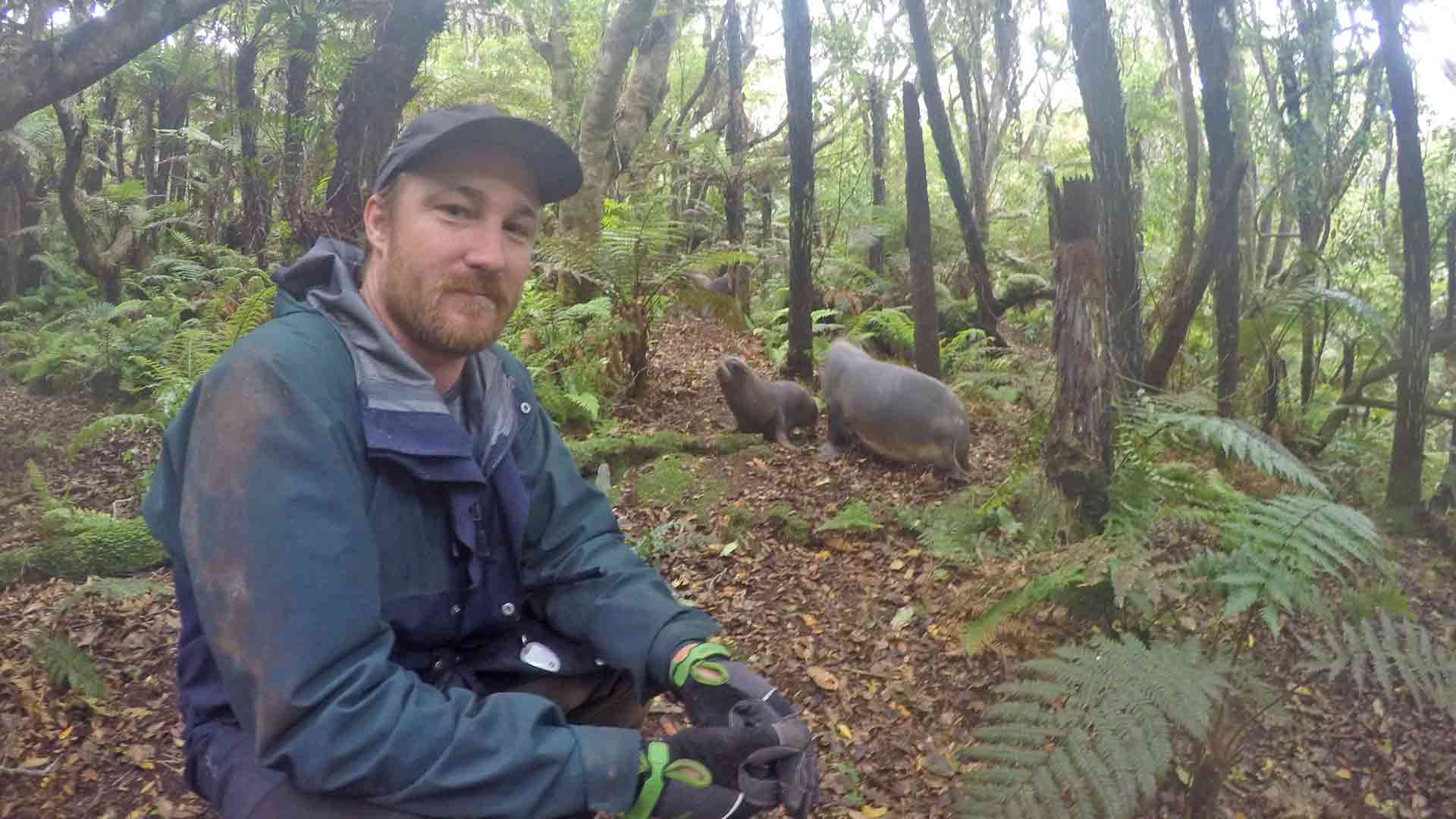 This is Odin's fourth time tagging pups in Port Pegasus.

This is Odin's fourth time tagging pups in Port Pegasus.

When asked how these large sea lions manoeuvre their way around such uneven terrain with ease, Odin explains that despite their weight (males can reach sizes up to 450kg!), rāpoka are well adapted to move over difficult terrain like this.

“Some seals (like fur seals) and New Zealand sea lions can rotate and walk on their hind flippers. This ability paired with their low centre of gravity is perfect for getting around – something we humans with legs struggle with!”

It’s predominantly the female sea lions, pups and juveniles that choose to make the climb into the bush, as adult males often become territorial during the breeding season. It’s too risky for a female to get caught in the crossfire of two males when she has offspring waiting to be fed at the top of the ridges. However, as Odin explains, the team may stumble across a male who has finished breeding for the year as they search for pups.

“It’s important that the team know how to act around them and understand their behaviours to keep themselves and the sea lions safe”, Odin says. “We don’t leave the trips any later than the end of March as, by that time, pups are already a few months old and can weigh up to 40kgs – and they know how to use their teeth!”

Thankfully, working with seals at Auckland Zoo for ten years has provided Odin with skills and knowledge around handling and behaviour. He is one of the primary care-givers to Sub-Antarctic fur seal Orua in The Coast habitat at Te Wao Nui. Orua was rescued from the wild due to his significant injuries and was treated and rehabilitated at Auckland Zoo’s vet hospital. He is blind and has a cataract in one eye which means Odin and the rest of the seal team go the extra mile to give him plenty of enrichment, regular health checks – both physical and psychological. These traits not only make Odin a great zookeeper, but they also transfer incredibly well when working with and tagging sea lions in the wild.

Preparation for tagging begins early in the morning on the boat. As they search the coastline and inlets of Port Pegasus, the team keep an eye out for any signs of sea lions. This often takes the form of slips and tracks on the muddy shore or, upon a closer glance, sea lion scat.

If the team spot a clue that could lead them to sea lion pups, wet socks and shoes ensue as they navigate their way to shore. From here, the team split up to track the sea lions into the bush. Odin explains that this can take hours as they sometimes have to double back if they missed them the first time. The team also try and time their searches with the parents’ schedules who tend to go fishing in the deeper waters in the middle of the day.

“It’s more convenient for us if the parents aren’t there – it’s easier to handle and tag the pups without mum worrying about what we’re doing. In saying that, New Zealand sea lions are usually pretty chilled about the whole thing. The tagging process only takes a few minutes and after that, they usually stick around as they’re curious about us!”

It’s funny to hear Odin compare the mannerisms of the New Zealand sea lion to man’s best friend. “They’re calm, gentle and fairly relaxed around people, much like labradors. Whereas wild fur seals are a little more hostile, kind of like a chihuahua!”

Once the team feel satisfied that they’ve tagged all the pups they can find in the area’s hotspots (they might miss some as they can’t scour the entire footprint of Port Pegasus!), it’s time to record their findings in the annual report. This year, the team tagged 47 pups. They also found 26 sea lions that had been previously tagged which proves that the area is repeatedly frequented by those in the colony and is a useful indicator of survival. 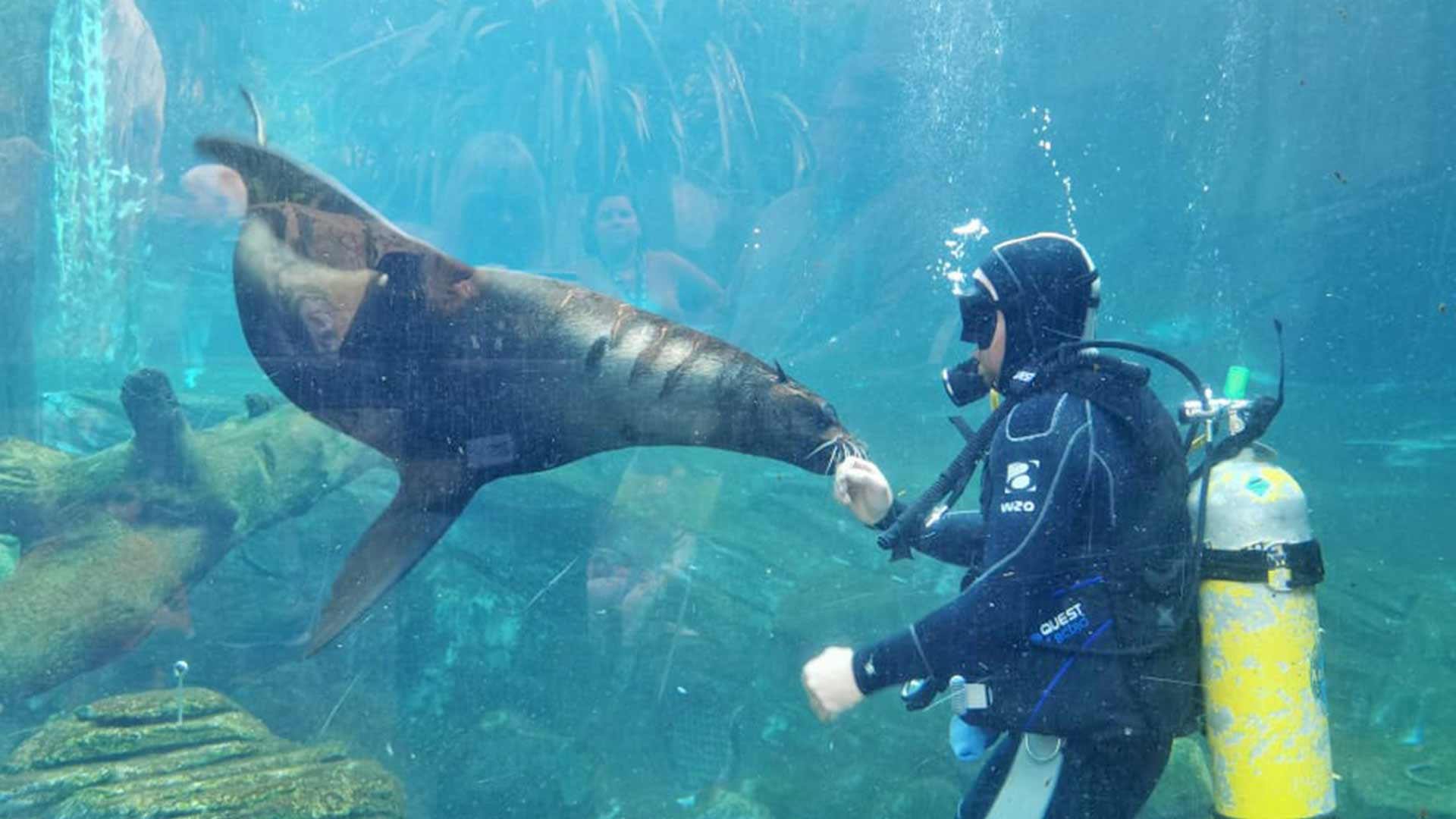 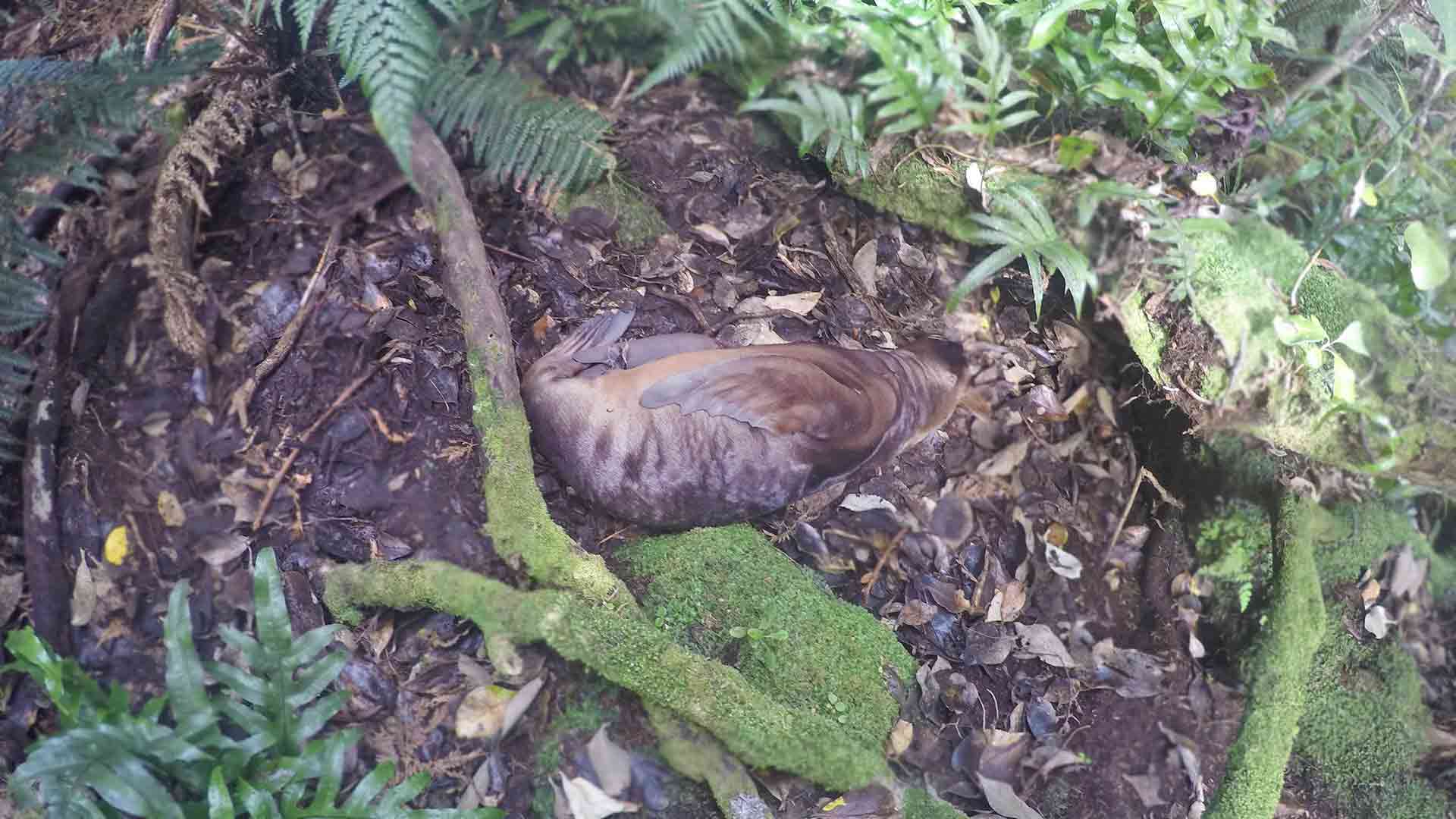 The rāpoka are great at camouflaging within the flora.

The rāpoka are great at camouflaging within the flora.

These annual surveys and pup tagging in Port Pegasus play a crucial part in the collective understanding of rāpoka as already numerous sightings of tagged Stewart Island sea lions have been made on mainland NZ around Otago and the Catlins. Being able to make a connection between these two mainland sites and the Sub-Antarctic’s colonies is a huge achievement for conservationists as it suggests that sea lions are making a slow return back to the mainland which they once called home. This would be a fantastic result.

Armed with these results and a better understanding of the species, Odin explains that we can learn to co-exist in the same environment and build awareness about the issues New Zealand sea lions face.

“Working closely with Orua has equipped me with the knowledge and skills to give back to the wild. I think he’s a fantastic advocate for marine life and hopefully, by sharing the work we’re doing to protect and preserve species in the wild, it inspires others to care.”

Working alongside our stakeholders from DOC and Massey University, Auckland Zoo is excited to see where our conservation contributions and efforts can take us and what that means for the New Zealand sea lion.

Check out the amazing work that you’re helping to support!